One of the first things we learn to do after we are born is to communicate. Communication is key to our lives and language forms the basis for this communication. Any language depends on its alphabet. Today, we bring you a printable collection of coloring pages inspired by one of the widely used and internationally accepted languages – the English alphabet.

The English alphabet is a derivative of the Latin alphabet, originating around the 7th century. In its present form, the English alphabet has a total of 26 letters which we all have learned in our kindergarten schools or even at home. There are upper and lower case forms available for each letter. Do you remember writing these during the handwriting lessons? Don’t worry you won’t have to write today. You get to have fun coloring. Let’s get right into the action of coloring with this entertaining collection of ABC coloring pages to print. 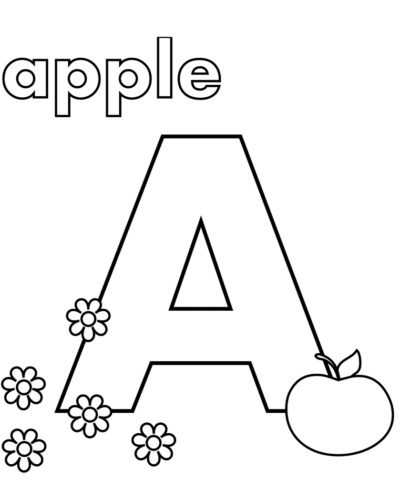 We are starting off our collection with the first letter in the English alphabet, A, and a delicious fruit that makes an awesome pie. As we learned in schools, it is in fact, A for Apple. Fill in the right colors in this illustration of an apple at the foot of the huge letter A. 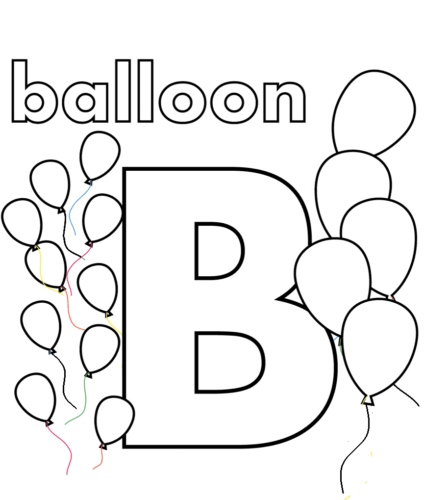 After the apple, we are moving on to something light and airy. It’s time for the second letter and it is B for balloons. Not just one but lots of balloons. Look at the letter B decorated with lots of balloons. Print this page and give each balloon a different color and pattern. 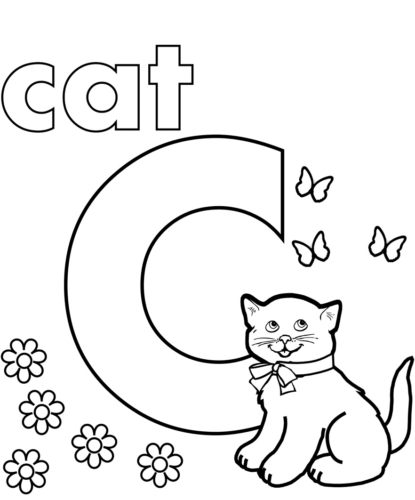 Mischievous cat finds itself on the illustration of the third letter of the alphabet, C. Sitting pretty next to the large C letter, the cat looks adorable, doesn’t it? Cats are among the two most common pets in the world, in addition to dogs. Cat videos are also one of the widely watched videos. 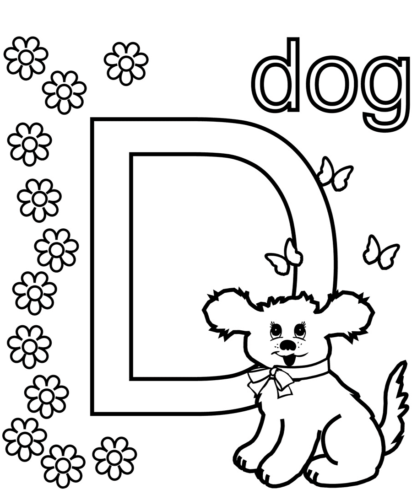 After cats, we now look at the other popular pet, in our next letter. It’s D for Dog. This illustration of a puppy dog is endearing, to say the least. Look at the flowers and the butterflies surrounding the letter D and the cute puppy. Give fun colors to this cool illustration. 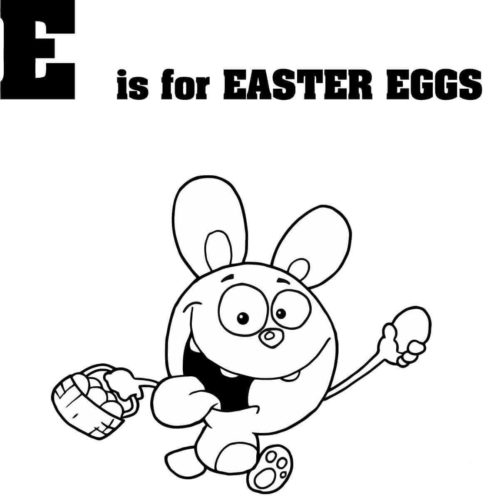 December is ending and a few months away next year you will get to celebrate Easter. Illustrating an enthusiastic Easter Bunny carrying along with some Easter Eggs, we have the next letter of the alphabet on this coloring page. It is, of course, E for Easter Egg.

Showcasing the next letter of the alphabet is F which stands for Frog in this illustration. Being an amphibian, frogs can live on both land and water. This frog lives in the pond, where it has lots of food sources, like the fly that is hovering around. 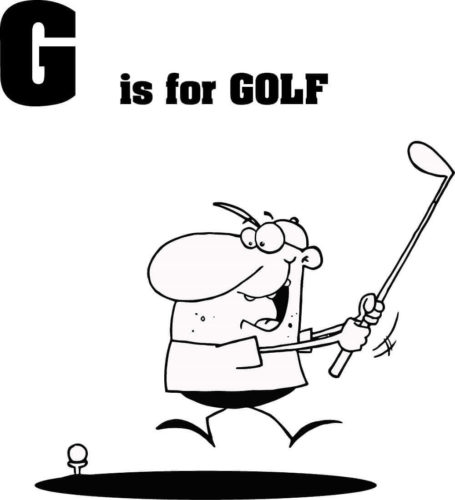 The letter G stands for Golf in this illustration – a sport that involves striking a tiny ball through long distances into a hole in the field. While there are several world championships, most people play golf as a hobby. Just like this man here, getting ready to hit the ball. 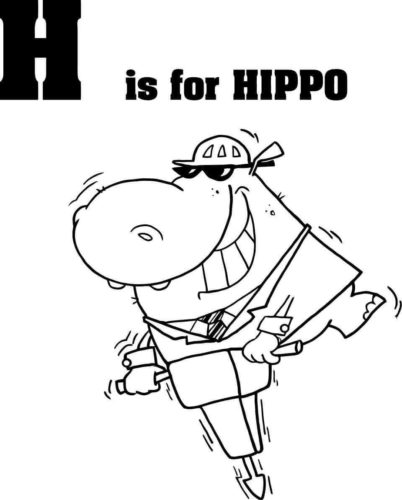 While looking at the animal hippopotamus, stylish and fun aren’t exactly the words that come to mind. But that’s exactly how this hippo illustration is looking for the next letter, H for Hippo. He even has a pair of stylish goggles on. Print this coloring page and give this hip hippo a colorful makeover.

Winter or summer, it’s hard to resist ice cream, isn’t it? No wonder this little fellow here is already salivating looking at the yummy ice cream he just bought for himself. As with anything that’s frozen, the best way to eat it is to have it before it melts away. Fill in the colors in this illustration of the letter “I” for Ice cream.

After the delicious ice cream, the next letter is J and J is for Jackrabbit on this coloring page. A rather happy looking Jackrabbit, as he has just found himself a pretty little flower. While they may look like rabbits, Jackrabbits are actually closer to hares than rabbits. One of the ways to distinguish them is by looking at the ears on Jackrabbits, which are much longer. 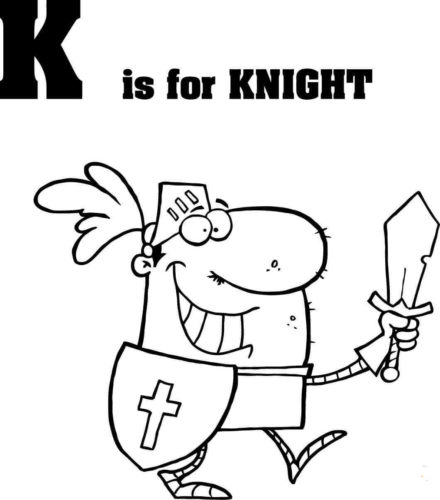 Victoriously claiming the letter K is the Knight. Great fighters born of a noble birth during medieval times are called Knights and they are known for fighting for their king in battles. Equipped with the shield and the sword, this Knight is ready to fight his enemies. Make sure you also are ready with your colors. 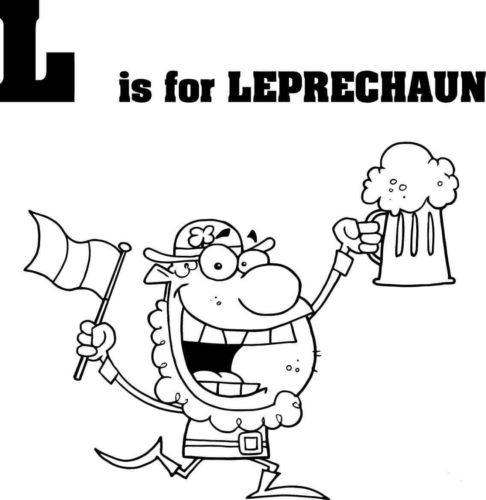 The next letter in the English alphabet is L and we have a mythical Irish creature starting with the letter. It’s Leprechaun, the green creature who is believed to keep his treasure in a pot of gold, hidden at the end of a rainbow. This fun illustration shows the Leprechaun holding a drinking glass and the Irish flag in his hands.

Magically pulling a rabbit out of his hat, here’s a magician taking the spot for the letter M. Can you guess what spell he used to do his magic? Yes, of course, it’s the famous magic spell “abracadabra”. Print the coloring page and fill in some magical colors for the magician, his costume, and other elements in this illustration. 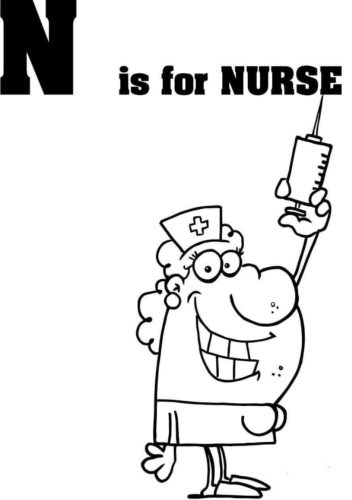 One of the true backbones of the health industry is the nursing staff, going toe-to-toe with the doctors to provide the best care for the patients. This is N for Nurse, the next letter in the alphabet, holding an injection and ready to administer to the next patient. If you are scared of needles, be sure to finish coloring this illustration quickly. 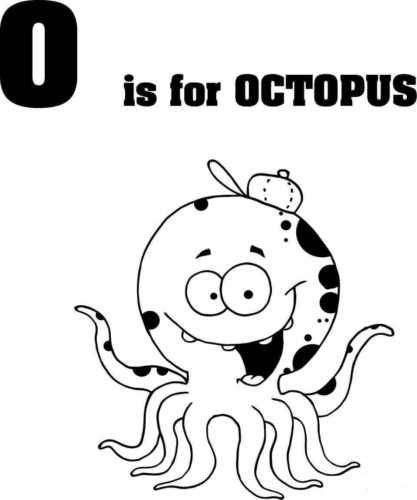 With eight long arms, this soft-bodied sea animal has claimed the letter O. We are talking about the Octopus. Did you know that they have nine brains and three hearts? You can wrap your head around this information while you color this illustration. 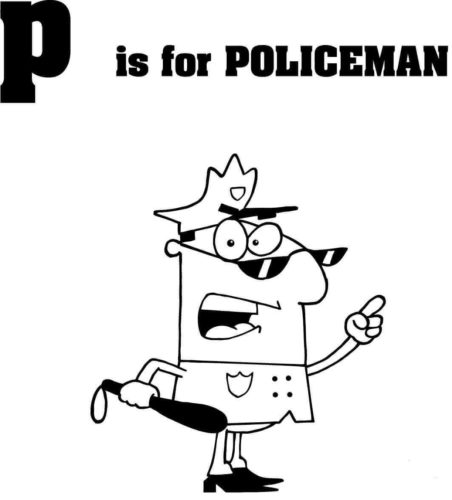 Here we have the next letter in the alphabet, P for Policeman illustrated on this coloring page. Looks like somebody is flouting some rules or breaking a law and this policeman is not happy at all. He is quick to reprimand and issue a verbal warning. Efficiently print this page and fill in the colors if you don’t want to get scolded. 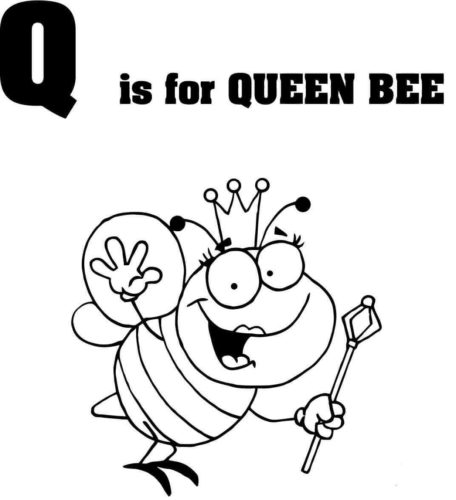 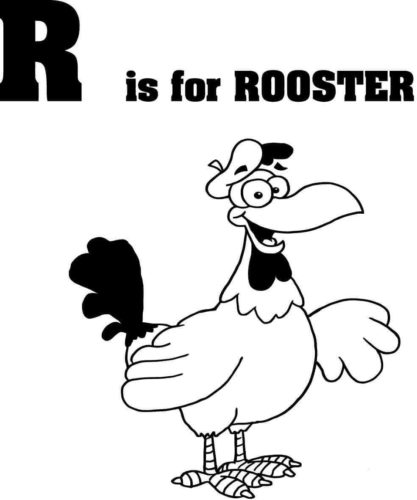 From the bee royalty, we now move on to the Rooster holding its place for the letter R. Roosters are like the morning alarms in the farms. Why? If you have lived on a farm or perhaps seen in documentaries and movies, you might have noticed people waking up to the Rooster’s cock-a-doodle-do in the early mornings. 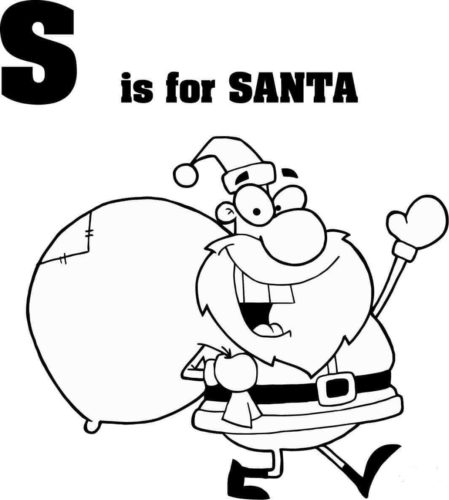 Christmas is just days away and Santa, with some help from all the Elves, is already hard at work with the Christmas gifts. Ringing in festive cheers is S for Santa as he prepares another bag of Christmas presents to be delivered right on time for Christmas to one of the lucky families. 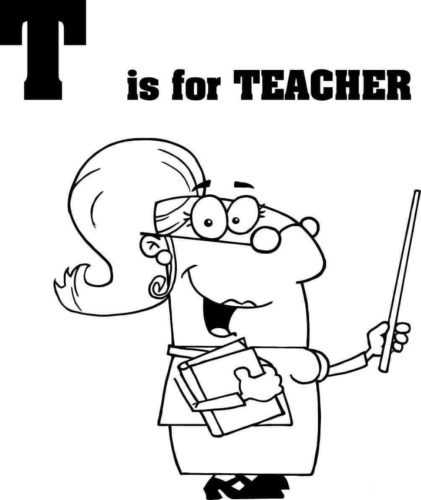 While schools might have been shut in several places around the world due to the COVID-19 pandemic, most teachers turned to online lessons to continue the children’s education. This is why we have T for Teachers in our next letter from the alphabet. This looks like a fun and informative class. Pay special attention while coloring this illustration. 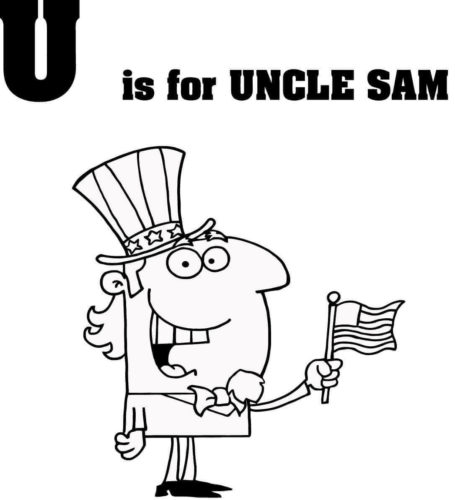 For the next letter, we have U for Uncle Sam, the nickname for the United States which has gained popularity over the centuries. You will find him often illustrated, just like here on this coloring page, wearing the colors of the United States flag – red, blue, and white. 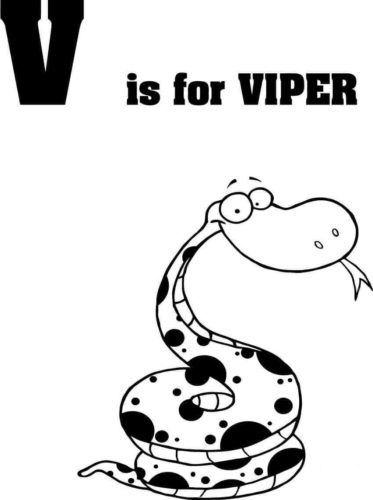 Next up we have V for Viper. Belonging to the family Viperidae, Vipers are venomous snakes that are found almost everywhere around the world. You can notice the long, hinged fangs of the vipers. Bring out the dangerous details of this snake with your coloring skills. 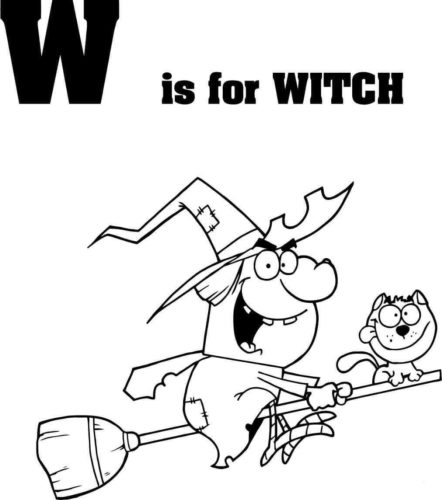 Showcasing the next letter W is the mystical and magical Witch. Flying around on a broom, a witch’s favored mode of transport, this joyous Witch has even managed to carry along with her pet cat on this ride. Fill in wondrous colors to bring out the fun in this illustration. 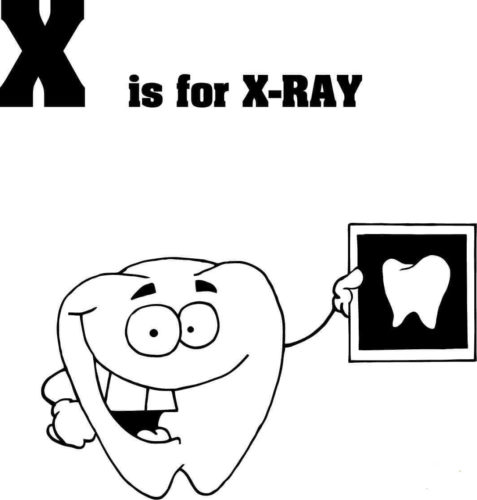 It’s time now for the X letter in the alphabet. We have X for X-rays which has become commonplace for most medical examinations. X-rays are actually electromagnetic waves and through the process, you get to see the internal parts of your body.

For Y, illustrated here is one of the cattle –  a Yak. This domesticated wild ox is characterized by its long, shaggy hair and large horns. They are mostly found in high altitude regions of Tibet and adjoining areas. 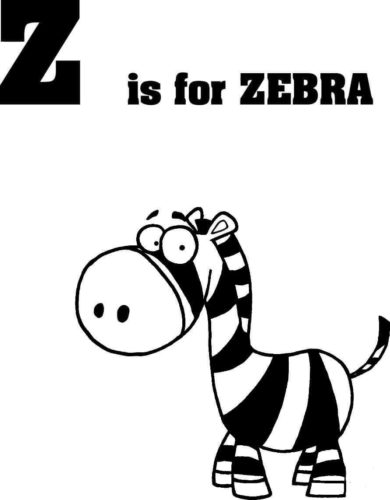 The last letter of the alphabet Z is here, and it is bringing along the animal Zebra. Belonging to the family Equidae, Zebras are African equines and can be easily distinguished by the black and white stripes, which are unique for each individual animal.

This illustrated version of the alphabet gives you something to think about and play a guessing game while you color. You have both the upper case and the lower case of each of the letters underneath the illustrated object for each letter. A is for apple, you already know. Figure out the rest as you fill in the colors. 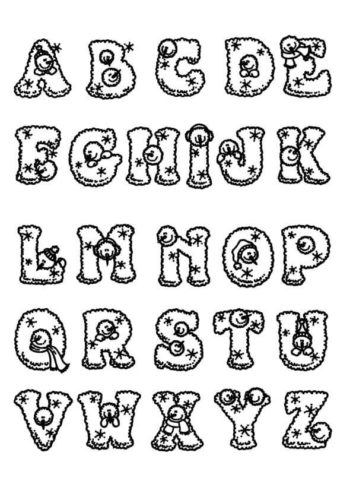 Making sure you are ready for the festivities, here we have a Christmas themed English alphabet illustration for you to color. There are special Christmas elements adorned on each of the letters illustrated here. Print this coloring page and fill it with the colors of the holiday season.

This artistic ABC coloring page adds a creative twist to the English alphabet. Instead of drawing the items, each letter stands for, the artist has turned the letters into the items. You can see the leaf on the A for Apple and the bee stripes on the B for Bee and so on. 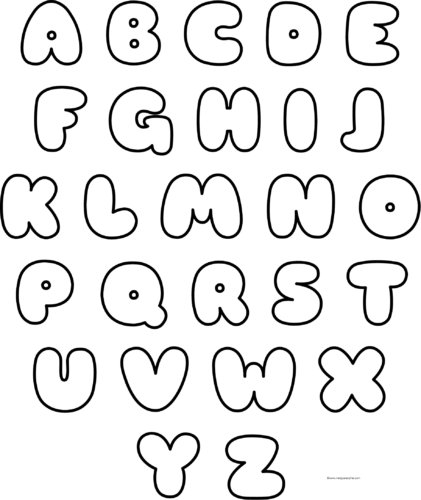 After the artistic interpretation, greeting you on this coloring page is a blank canvas. All the upper case alphabets are waiting for you to fill in the colors inside each of these letters.

This brings us to the end of the fun and informative a to z coloring pages. Did you enjoy yourselves while filling this ABC coloring pictures? We hope you had fun and learned something new as well. While the fundamental English alphabet remains the same, you can have different shapes and designs of the letters, depending upon the font, typeface as well as individual handwriting.