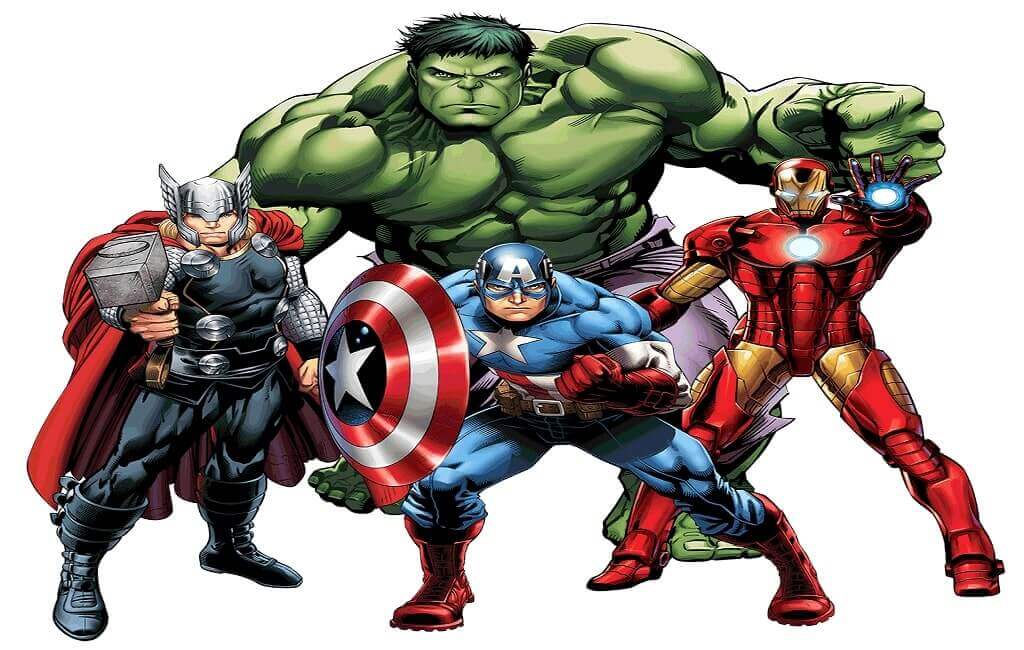 Good day children! Hope the New Year has been treating you well with the month of February keeping you fine and healthy. To make you feel even better we have a special collection for you today. For the fans of comic books and superhero movies, we have brought for you a collection of Avengers coloring pages printable.

Published by Marvel Comics and turned into a super-successful movie franchise, the Avengers are a group of superheroes existing in the Marvel universe who come together as a team to fight the enemies of the earth and humankind. The Avengers team made its debut in the comics in 1963. The Avengers craze increased multifold with the live-action movie released in 2012, creating box-office records worldwide. Since then there have been several follow-up sequels, the latest set to release in April 2019.

Let’s dive in deeper into the world of the Avengers and the superheroes making up this team, through this collection of Avengers coloring sheets to print.

A superhero with the ability to become as tiny as an insect to fight its enemies, that’s the Ant-Man for you. He even can turn into a giant, as you might have seen in the Avengers series. Do you remember his superhero outfit? If yes, print this page and color it with the correct colors.

Seems like an incredible fight scene from the 2012 movie, Marvel’s The Avengers. There are so many different superheroes fighting different enemies in this detailed illustration. Print this page and get ready to fill in the right colors for each superhero.

This illustration depicts the Avengers in Japanese manga style chibi, where the characters are drawn small and cute. Even the angry and bulky Hulk looks so adorable. You are sure to be smiling all the way till the last stroke of colors is filled.

Latest in the Avengers franchise, you might have caught the trailer of “Avengers: Endgame” just a few weeks back. Here giving you a glimpse of what to expect are the Hulk, the Wasp, and the Iron Man. Give them a colorful welcome by printing and coloring this page.

Fighting against the evil plans of his brother Loki, you can find Thor along with the rest of the Avengers trying to save the Earth from destruction. You can print and color this page, carefully showcasing each of the characters.

The third movie in the Avengers franchise was a tough one for most fans, as one of the turning points in the movie was the fight that ensues among the Avengers. Although part of a team and what it stands for, each superhero also has its own set of individual principles. When the two clashed, they chose to stand by their principles, which divided the team. You too must always stand by your own principles and be true to yourself no matter what, if ever such a time comes in your life.

One of the most successful movies of last year, the Black Panther solo movie was loved by the audience and the critics alike. Whether in his solo outing or in the Avengers franchise, the Black Panther or T’Challa, the King of Wakanda always fought for the justice of the world. Give your love and respect to this magnificent character by printing and coloring this page.

Once a Russian spy, Natalia Alianovna Romanova is known to the entire world as the Black Widow. She has had a great journey, knowing and understanding her own values and what is worth fighting for in this world. From an enemy she turned into a friend, fighting alongside others as part of the Avengers team.

Arguably one of the most known superheroes in the Avengers, Captain America has stood for the goodness of humankind. Here in this illustration, he is depending on the goodness of your coloring skills to make him believable as the Captain with the shield. Quickly print this page and start filling in all the relevant colors.

One of the characters from the Guardians of the Galaxy team, Drax – the Destroyer has a strong build. Making him endearingly funny is how he takes time to understand the etiquettes of interpersonal communication, resulting in him often saying inappropriate things. But you must do the appropriate thing and quickly color him accurately.

Highlighting some of the characters of the Avengers team, this illustration shows each of the superheroes striking a powerful pose. Whether it’s the shield-wielding Captain America or the punch-ready Hulk, the hammer-ready Thor or the all-set to fly and attack Iron Man, you can turn this plain picture into an exciting and colorful poster.

Looks like some more of the Avengers team members have joined Captain America, Thor, and Iron Man. You can check out who those members are while you print and color this page. Give each one of the Avengers, the Earth’s mightiest heroes, a realistic and colorful touch.

Perhaps one of the most adorable characters in the “Guardians of the Galaxy” franchise was the introduction of baby Groot. He had the entire world charmed by his cuteness. But don’t let it fool you, he is still as feisty as ever. Print this page and color it quickly before baby Groot becomes angry Groot.

Looking at the archery skills of the Hawkeye would make you want to excel in handling a bow and an arrow too. In this illustration, the superhero and the member of the Avengers team is ready to shoot his arrow at his opponent. From his fingers holding the bow and the arrow to the positioning of his legs, capture the perfect stance of this Avenger.

The renowned physicist Dr. Bruce Banner after a failed scientific experiment turned into a green monster, incredibly strong and powerful. Although his transformation is largely unpredictable, through the Avengers franchise you can see that Banner is able to control it to some extent. Call on your mighty coloring skills as you print and prepare to color this superhero.

You know him as the Iron Man and as Tony Stark. But did you know that his full name is Anthony Edward Stark? This genius inventor and industrialist inherited the Stark Industries from his father and developed the suit armor which gives him his powerfully strong alter ego “Iron Man”. Admire this inventive genius by printing and coloring this superb illustration.

The Lego movies have been a phenomenon ever since they were released. In keeping with the trend, this illustration showcases a few of the Avengers in their Lego avatars. You can easily make out who is who can’t you? Get your colors ready and fill each of them in their appropriate colors.

The antihero and often the enemy of his own adopted brother, the mighty Thor, Loki proved to be a sly character in the 2012 Avengers movie. He was so infuriated when he tried to enslave humans and rule the earth, wasn’t he? But thanks to the Avengers including Thor, the earth was saved.

Colonel Nicholas Joseph Fury or more popularly known as Nick Fury is the director of the special law enforcement organization S.H.I.E.L.D. which deals with superhuman threats. He was the one who reactivated the “Avengers Initiative” in the 2012 Avengers movie, bringing the Avengers team together to fight the evil.

Peter Quill or the Star-Lord, the leader of the “Guardians of the Galaxy”, is a half-human and half-alien interplanetary policeman. From his penchant for classic pop and rock and roll songs, the character goes about doing his job with a lot of fun and a bit of trouble too.

You must have seen Quicksilver or Pietro Maximoff, the twin brother of Scarlet Witch, in the Avengers – Age of Ultron movie. Defined by the fact that they were abandoned and left to fend for themselves while growing up, he is quick to anger and has superhuman speed.

Rocket Raccoon is a motor-mouth with military weapons mastery. An engineered raccoon with super-developed characteristics, Rocket Raccoon is the right-hand man to the Star-Lord in the “Guardians of the Galaxy” team. You know about his problem-solving skills, now let him know your coloring skills by printing and coloring this page.

Wanda Maximoff or Scarlet Witch is the twin sister of Quicksilver. If her brother has superhuman speed, then Scarlet Witch, on the other hand, has hypnosis as well as telekinesis. She was first introduced in the Avengers live-action film franchise along with her brother in the “Avengers: Age of Ultron” movie.

The new Spiderman in the Avengers franchise is a witty, hyper, and enthusiastic teenager, every young millennial identified with and remarkably essayed by actor Tom Holland. He has been shown as Iron Man, Tony Stark’s protégé in the franchise. He is all set to feature in the new “Avengers: Endgame” movie as well.

The main villain in the Avengers: Infinity War movie, Thanos has given the Avengers a tough fight. He is out in the world seeking to obtain absolute power by collecting all the Infinity Stones. You can catch him in action again in the upcoming “Avengers: Endgame” movie.

The Vision is an android or a synthezoid created by the robot Ultron to seek revenge from the Ant-Man and the Wasp. Earlier working as ordered by Ultron, he soon develops his own thought process and joins the Avengers. He harnesses solar energy with the help of The Solar Jewel on his forehead. Using the same to fire radiation, he can also cause destruction around him.

One of the Avengers team member to have his own solo movie franchise, Thor is the “God of Thunder” as he can cause lightning to strike with this hammer. Fighting the good fight, he even went against his brother Loki, in order to defend the future of the earth.

In the movie 2015 “Avengers: Age of Ultron” movie, the Avengers are seen fighting against Ultron. A peace pilot program gone terribly wrong, Ultron is an artificial intelligence that develops its own intelligence and starts believing that only by exterminating humankind will earth be at peace.

A close friend of Tony Stark or Iron Man, Jim Rhodes is an expert in armored combat. Just like Tony Stark and the Iron Man suit, when Jim operates the war machine armor, he becomes the War Machine.

After reading through this interesting and adventurous collection of Avengers coloring pages to print, you must be excited to see the latest movie in the installment. Don’t worry, February is almost over and come Spring, April will be here bringing you the gift of “Avengers: Endgame” along with blooming flowers and greeneries everywhere.