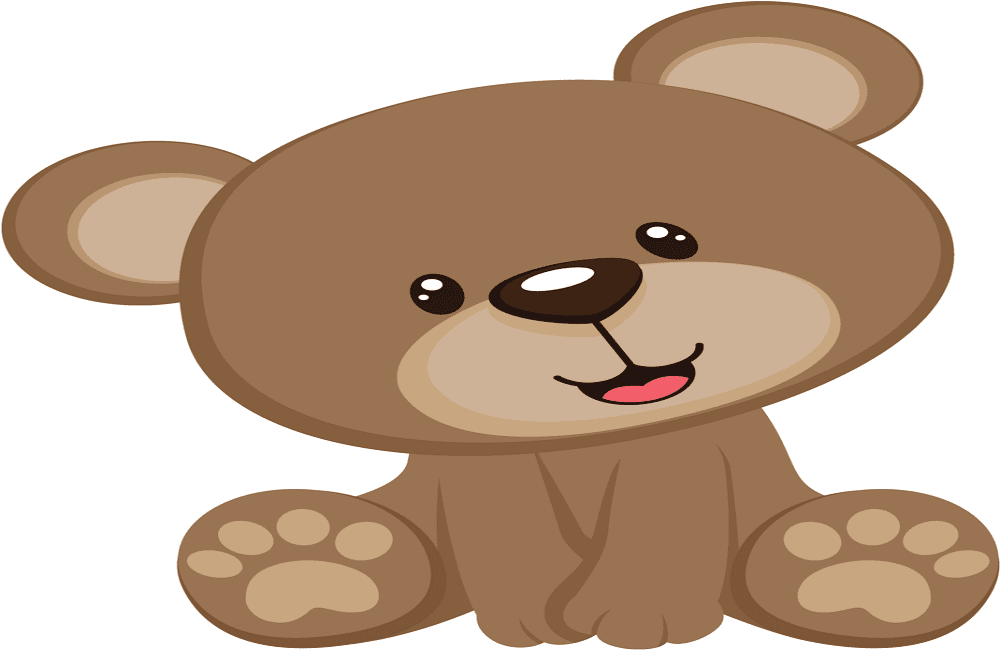 Winter is knocking on our doors as November begins. As the chill in the air gets too cold, we end up spending more time indoors. When it comes to animals, there are a few animals who take the winter rest to another level. Today’s topic of coloring sheets is inspired by an animal known for its long hibernation – bears.

Bears belong to the family Ursidae and are widespread all around the world living in different habitats. From the cold, icy regions to deep forests, you can find the eight varied species of bears adapted to their particular environment. Common features include large bodies and heavy legs, small ears and short tails, long snouts and nonretractile claws, and covered in shaggy hair.

Looking at the size of the bears, one might think they aren’t fast. On the contrary, they are great runners and excellent climbers, and swimmers. While bears are mostly omnivorous, species like Polar Bears are mostly carnivorous and Pandas depend almost completely on bamboo for their diet.

During their hibernation bears can go without food for a period of up to 100 days. Let’s find out more such interesting facts and fun illustrations through this collection of bear coloring pages to print.

What better way to start this collection than an illustration dedicated to the family! A bear family! Here’s a mother bear watching over her cubs playing in the wild. There’s even a squirrel. Give life to this wonderful scene with your colors. 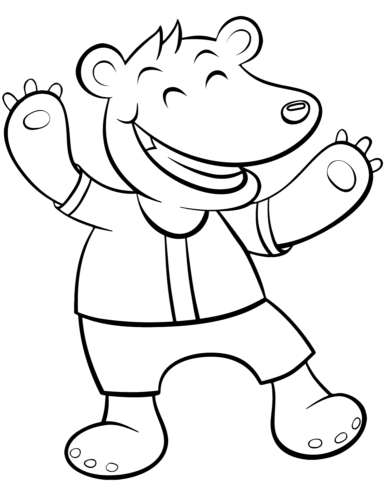 Taking a hint from the playful time of the cubs, this cartoon bear is dancing away without any care in the world. Just looking at this is enough to make you smile with joy. Print this coloring page and fill in some happy colors. 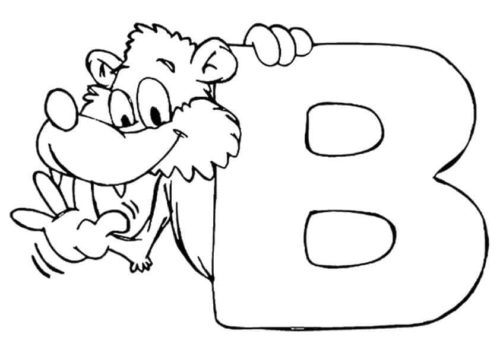 It’s the alphabet lesson time now. And keeping with our topic today, we are learning the second letter in the English alphabet. Yes, it is “B for Bear”. There’s a fun bear illustration along with the letter “B”. 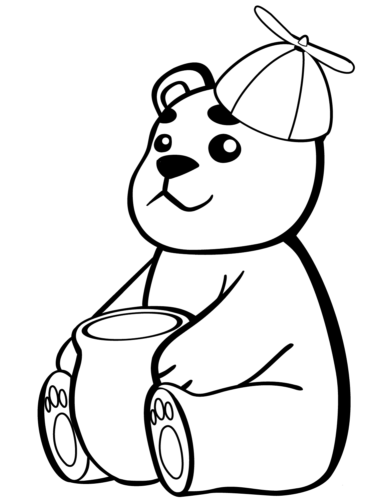 While bears are mostly known to eat fish and honey, they are actually omnivores. Depending upon the lack of their main food source, they can consume leaves, berries, insects, etc. This baby bear is happy to have a jug full of honey to eat on this coloring page.

Time for some fun activity for the kids. As you can see, this illustration of a bear is missing quite a lot of the details. There’s only an outline of a bear. Once you print this page, you will have to fill in the facial details and give it your best colors.

If you see something as curious as a bear rubbing against trees or similar objects, rest assured it’s a completely natural behavior. This is their way of marking their territory as rubbing leaves behind their scent. 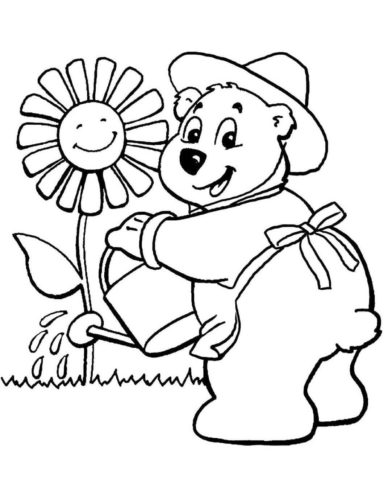 Showing the gentle side of a bear, this illustration is all about a bear that loves to garden. Look at the bright smile on this bear as it waters the giant flower. Taking care of plants requires lots of patience and time like watering them regularly. 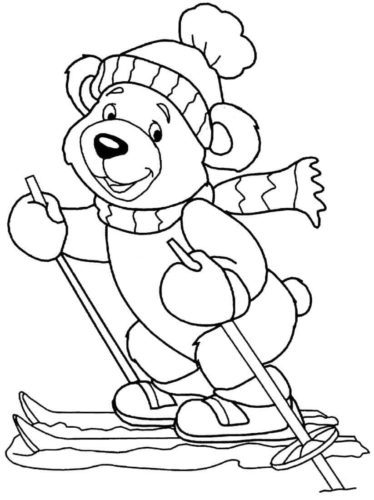 It’s November and winter has already set in on this coloring page. That’s why this bear is all dressed up warmly. The right gear is really important especially if you are doing winter sports like skiing like this bear. 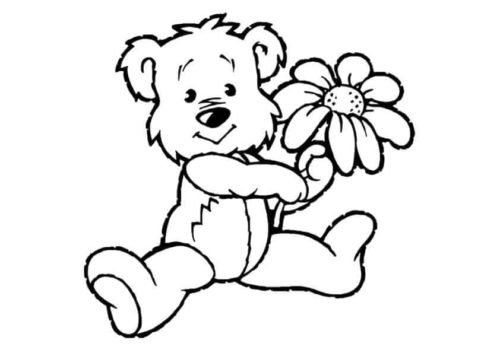 Sharing the love for flowers just like his father, this little bear cub is holding on to the fresh flower plucked from the garden. Make sure to give this illustration some blooming colors. 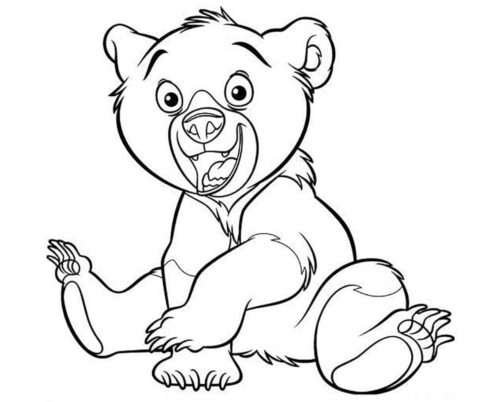 Unlike the other bear cub, flowers aren’t what this bear cub wants. He is looking for some fun time. Do you want to join in on some playtime with this bear cub? Print this coloring page and fill the illustration with some playful colors. 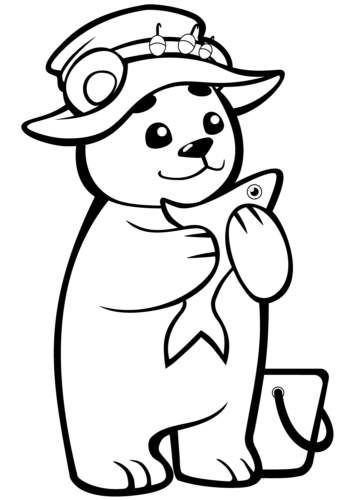 There’s nothing like a meal of fish to fill a bear’s empty tummy. After all, fish forms a crucial source of food for several bear species. For this bear, it’s going to be a fishy dinner as he has caught this fine fish today. 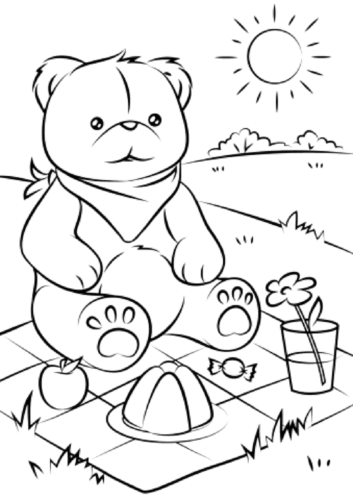 It’s a pleasant day and the perfect day for a nice little picnic. This bear is taking complete advantage of the beautiful day and is now enjoying a delightful picnic. He has packed some delicious food and drink.

Do you like bedtime stories? One of the many hobbies of this bear is reading books. You can hear some of the stories from this wise old bear while you print this coloring page and fill it with lively and interesting colors. 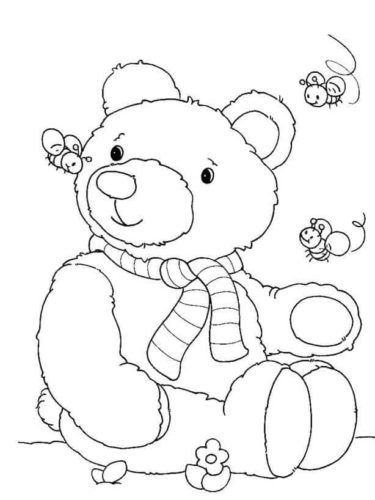 After fish, there’s only one other food that most bears love to eat. Honey! When bears want some honey, most of the time they simply dig into a beehive and take the honey. Which often gets the bees mad and they start swarming around just like the bees flying around this little bear. 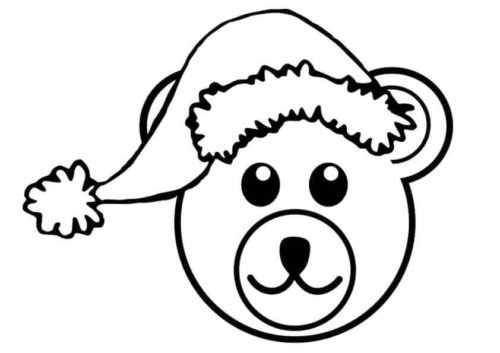 Ahead of Christmas, here’s a bear wishing you a Merry Christmas, wearing the red Christmas hat. You can even turn this illustration into a nice little Bear Christmas Postcard for your family and friends. 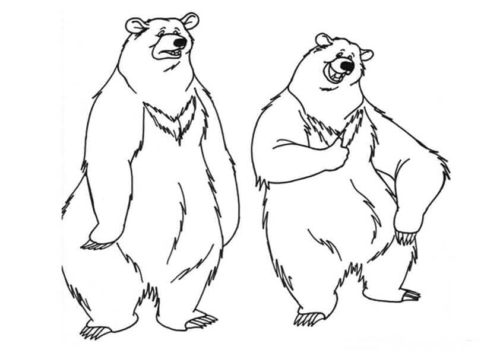 It’s a rare sight to see bears together as they are mostly solitary creatures. It must be the seasonal food catching time, like the salmon run. Print this coloring page and fill in some cool colors as you try to figure out what they are talking about.

Oh no! The fun rafting trip has taken a serious turn for these two bears. Thankfully, it is not a life-threatening accident. Only their raft is about to get overturned. Try to keep them as safe as you can by filling in comforting colors.

Inhabiting the forested areas, the Black bears are medium-sized and are the most common bear species in the world. They eat a variety of food depending on the availability and can even wander off the forests in search of food.

Found across the European region, Asia, and the United States, the Brown Bear has been appointed as the state animal or national animal in several of the European countries. Here we have a Brown Bear sniffing with its strong sense of smell, roaming around in search of food.

With the animated expression on its face and the funny posture of its body, this cartoon bear is attempting to make you smile. Did it succeed? Reward its effort by printing this coloring page and filling it with jolly colors. 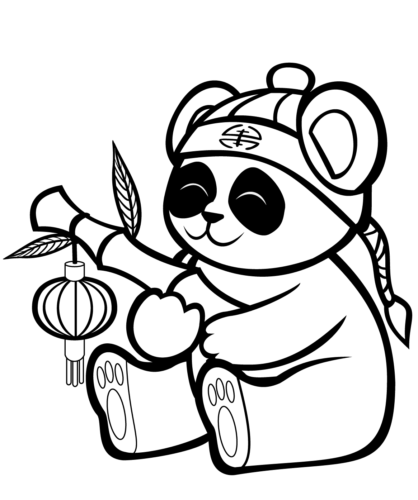 Here’s presenting another bear species – the Giant Panda or simply the Panda. Native to South Central China, the Pandas have large patches of black around their eyes, over their ears, and across their body. This cartoon Panda is holding a bamboo stick with a lantern, representing its native South Central China. 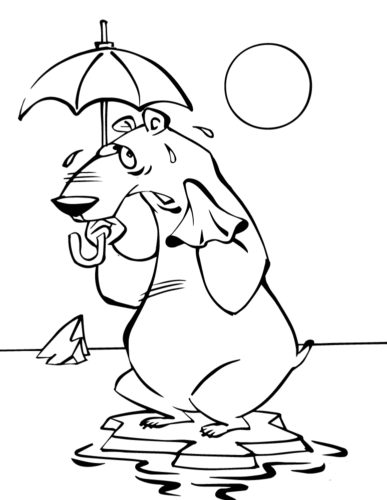 This illustration of a Polar Bear sweating in the heat while standing on melting, a small chunk of ice sheet represents their dwindling habitat loss due to climate change. The largest bear as well as the largest predatory carnivore, the Polar Bears are native to regions within the Arctic Circle. They are classified as Vulnerable species due to this habitat loss. 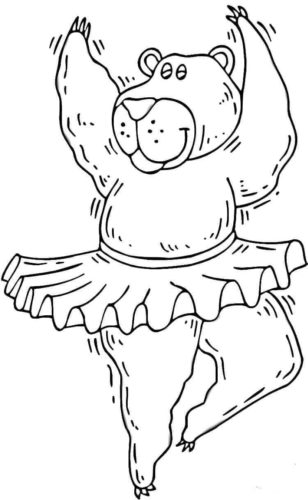 After that sad news about the Polar Bear, here’s a fun illustration to lighten up your mood. With their bulky body, imagining bears as ballerina can be difficult but this coloring page shows how even a large bear can master the art of ballet.

Dressed in a stylish suit, this bear is looking so dapper. It must be a special event for which he has made such an effort. You can try to find out what the occasion is while you fill in cool colors in this illustration. 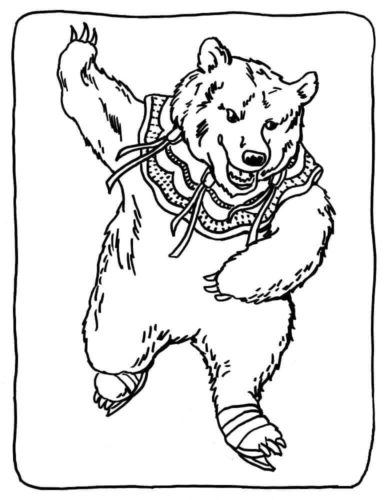 Looking at those funny illustrations, one might forget that bears are wild animals. They have strong forelimbs with nonretractable claws which are used to catch their prey, dig their dens, or to attack other large enemies.

Another fun illustration shows how a bear has learned to play a prank on an unassuming frog. To prevent a frog from jumping off, the bear has tied it to a small piece of rock. Don’t worry, he soon releases the frog. These two are cool friends who often prank each other. 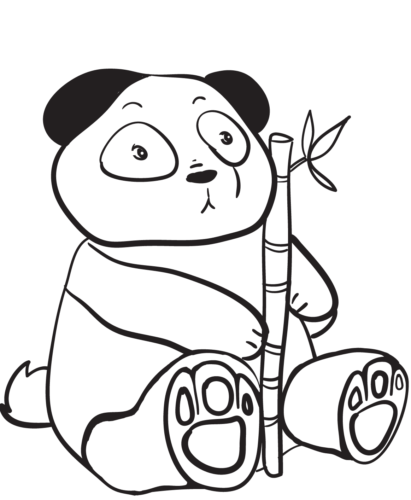 Unlike the other bear species, Panda’s diet depends solely on bamboo shoots and leaves, making it a folivore. It also eats other grasses and can even eat meat like rodents or birds when they are in the wild. 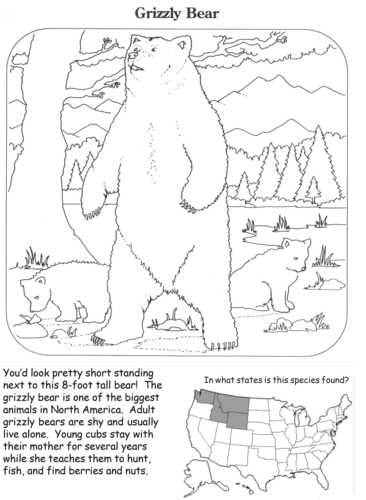 If you are wondering how big a bear can get, here’s a Grizzly Bear standing tall at 8 feet. Bears are mostly solitary except for when the mother bear raises her cubs for years teaching life skills. Can you identify the states specified in this illustration where Grizzly Bears are found in the United States?

Being solitary, Grizzly Bears are wary of other beings in their territory. An intruder must have roamed into the territory of this Grizzly Bear, that’s why it seems to look irritated and angry. You can try to assuage his anger with your soothing coloring skills. 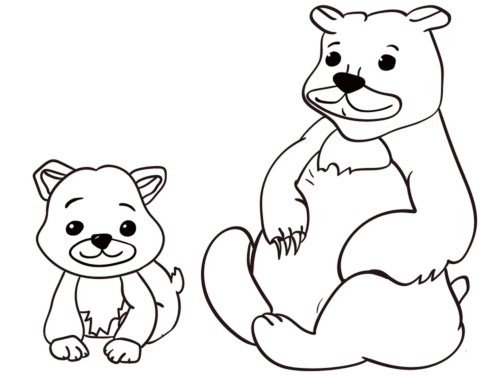 Mama Bear has been recognized in popular culture as one of the most dedicated and fierce mothers. They are extremely caring of their cubs which are born blind and helpless, teaching them life skills, and fiercely protecting them from any predators. Give this mama bear and her baby bear some loving colors. 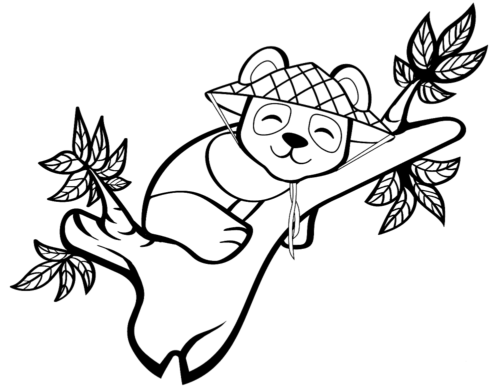 Looking for some more leaves to eat, this Panda Bear has climbed up a bamboo tree. It seems to be enjoying itself, sat comfortably after having a full meal of the fresh, green leaves. Print this coloring page and fill it with some greenery.

Since polar bears have a huge dependency on the sea ice, they have been classified as marine mammals. They are able to withstand starvation by living off their fat reserves in case of unavailability of food.

This sleepy bear is at the start of its long hibernation where it can slow down its metabolism to compensate for the inactivity. Bears generally don’t wake up during the entire hibernation period. 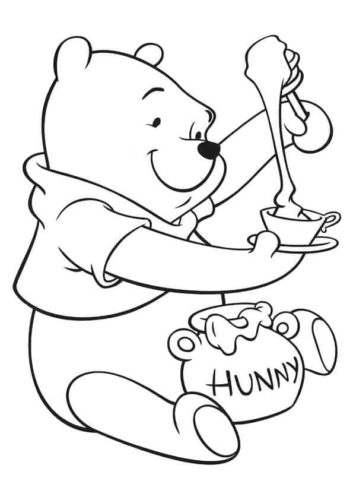 Perhaps one of the most popular bears in the world of fiction, Winnie the Pooh, was created by author A. A. Milne. The ever kind Pooh Bear is offering some of his honey for you.

On that sweet note, we have reached the end of today’s printable collection of bear inspired coloring sheets. We hope you had fun coloring these varied pages full of fun, interesting, and informative illustrations. Did you know that bears can see colors? Unlike other carnivores, bears have color vision, helping them to distinguish ripe fruits and nuts. They also have a strong sense of smell, even better than that of a dog.