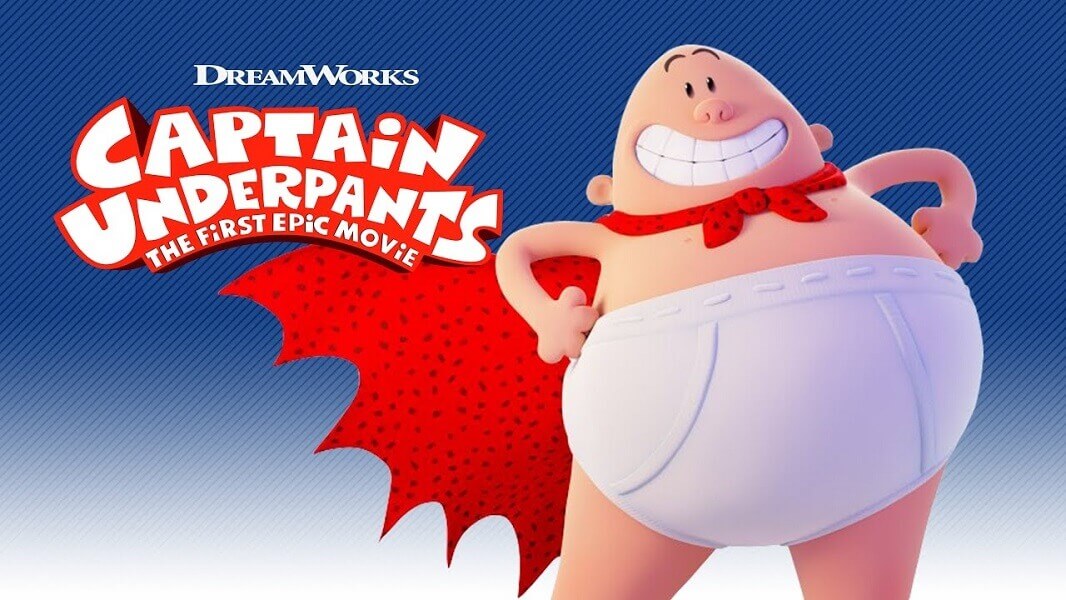 DreamWorks’ “Captain Underpants: The First Epic Movie”, is based on a much-acclaimed book series by Dav Pilkey of the same name. Boasting of some of the most prominent and A-list superstars, such as Ed Helms and Kevin Hart, the movie narrates the story of two pranksters named Harold and George, who trick their principal into thinking that he’s an enthusiastic superhero, called Captain Underpants. Captain Underpants then fights the baddies and criminals wearing nothing but underpants and a red cape.

Things were going well and good until they come across the mad scientist, Professor Pee-Pee Diarrheastein Poopypants. Professor Pee-Pee Diarrheastein Poopypants wants to get rid of laughter, yes, you read the right, laughter altogether because he is tired of people making fun of his name. He recruits Melvin because his brain renders him incapable of having fun or laughing. He then appoints Turbo Toilet 2000, which he fuels with the rotten leftovers of the school’s cafeteria to take over the town. But Captain Underpants comes in time and rescues everyone.

The critics may not have given high ratings to this movie, but it was acclaimed highly by the viewers, which explains its popularity even today. Now check out free printable Captain Underpants coloring pages below.

Here’s a coloring page of Captain Underpants, the titular character of this epic animated film. Captain Underpants is the alter ego of this grumpy teacher, Benjamin Krupp, created by the mischievous duo, Harold and George.

This coloring page features the secondary antagonist of the movie, Turbo Toilet 2000. Turbo Toilet is a huge toilet shaped monster with shark like teeth. His metal arms are very strong and can crush anything.

Here’s another Captain Underpants coloring page with George and Harold. The kids are probably laughing at another pose made by Captain Underpants, who actually believes that he’s a real superhero. Poor Benjamin!

If you have a toddler at home, you must print out this Captain Underpants coloring page for him. It’s a connect the dot coloring page, where kids have to join the dots to reveal the characters. The kids can then color the image anyway they like.

Besides the first one, you can even print out this connect the dots coloring sheet. It’s pretty obvious that it’s Turbo 200 behind the number, but do not let the kids know about it before they finish the task. And then they can fill the diagram anyway the like.

Captain Underpants is looking so confident in this coloring sheet, unaware of the fact that he’s not the real superhero. But he won’t be disheartened even when he comes to know that he’s not a real superhero, because what he has done for school is no less than a superhero kind feat.

This coloring page features George and Harold, the iconic duo who hypnotized Benjamin Krupp into believing that he’s a real superhero. While we do feel bad about Benjamin Krupp, we can’t help but laugh out loud at the antics of these two kids.

Here’s a coloring page George Beard, the fifth grader at Jerome Horwitz Elementary School and Harold’s best friend. George is the clown of the class and loves to play pranks on others, which even includes teachers. However, George’s pranks are mostly against cruelty, which is why he targets teachers as well.

Here’s another coloring page of Harold and George and it looks a lot more realistic than the other ones. Both the kids are equally naughty, but it’s George who comes up with prank ideas and Harold helps him execute it.

Here’s another coloring page of George and Harold and they are laughing uncontrollably at something. It seems that their other prank has gone very well, and why wouldn’t, after all George is such a pro at it.

Here’s a coloring page of Harold Hutchins, one of the primary characters of the movie “Captain Underpants”. Harold met George in detention and soon the duo started making comic books together. However, he is a bit more timid as compared to George.

Here’s a coloring page of Melvin Sneedly, the smartest students in Jerome Horwitz Elementary School. His father was the recipient of The Most Brilliantest Science Guy of the Whole Wide World Award, which is an added pressure of Melvin as he also wants to be like his father.

This coloring page features Benjamin Krupp, with Melvin. Melvin is a favorite of teachers, which includes Benjamin Krupp as well, because he’s no less than a genius and can create even the most complex inventions with ease.

Here’s a coloring page of Benjamin Krupp, the principal of Jerome Horwitz Elementary School. He has a long history with the two kids, Harold and George and dislikes them like anything. However, George’s 3-D Hypno-Ring makes him think that he is Captain Underpants, which in reality Benjamin isn’t even aware of.

Here’s another coloring page of Professor Poopypants and he looks very aggressive. He has died three times, yet refuses to slow down, even a bit, in his plan of destroying the world.

This coloring page features the arch rivals, Captain Underpants and Professor Poopypants. Give both of them color to calm them down.

We hope you enjoyed going through these Captain Underpants coloring sheets. And we’re sure you’ll have even more fun filling these images. After you have printed out these coloring sheets, you can check out our Trolls coloring pages too!