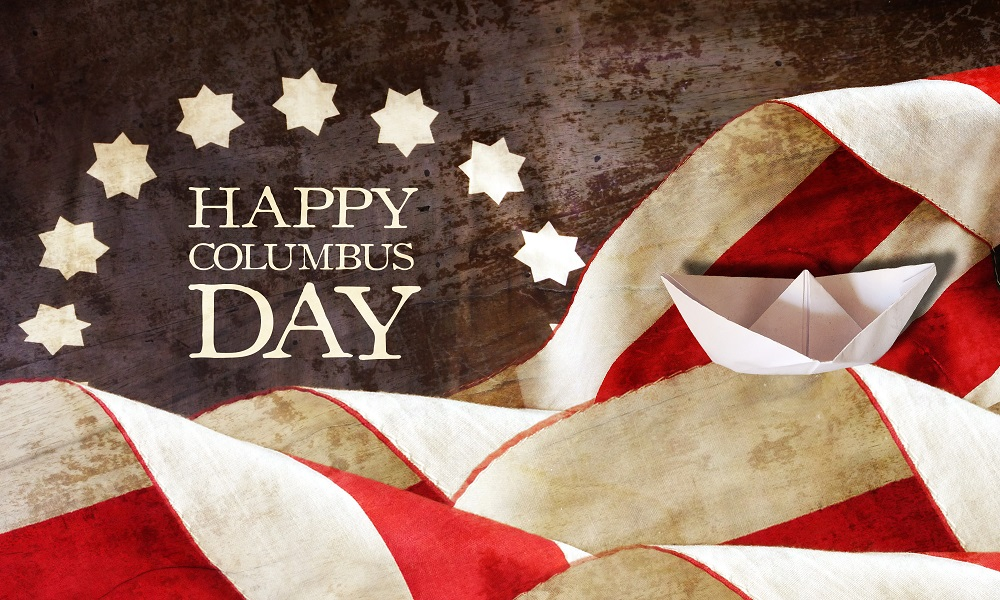 Ahoy sailor! Are you ready to get on the sea and sail to distant lands? Get on board then, because today we are going to fill free printable Columbus Day coloring pages. Columbus and his fellow sailors, in the year 1492, sailed from Europe to cross the Atlantic Ocean, oblivious of their destination when they finally stumbled upon what now is called The United States of America. He reached America on the 12th of October of the same year. To be precise, he landed in the Bahamas, which was locally known as Guanahani. Let us color this discoverer of lands. Let’s know a bit more about him with free Columbus Day coloring sheets to print.

One of the most common instruments one could see in the hands of a sailor, back in the day, was the one-eyed telescope, which was also referred to as a spyglass. Spyglass was used to spot objects in the ocean and distant pieces of land. Colour this land-seeker.

Christopher, at the age of fourteen, left the employment of his father’s workshop of wool as well as his school for an apprenticeship with a merchant who owned a trading ship. Looks like he knew his destiny early on in life. Color him well.

‘Columbus Day’ is a federal holiday in the USA, commemorating the landing of Christopher and his sailors on American soil on the 12th of October, 1492. Intriguingly, the states of Alaska, Hawaii, Oregon, South Dakota, and Vermont do not celebrate this day at all. Colour the joyous sailors.

Fun Fact: When Columbus discovered the USA, he was greeted by the Native Americans, who had come to that land crossing a land bridge, formed in the ice age. These pre-historic hunters came from northeast Asia. Let us color the first meeting.

Imagine Christopher’s delight when he finally set his eyes on that piece of land after months of an arduous oceanic journey! And centuries later, his discovery is now the greatest superpower of the modern world. A small step for one, a huge shift for mankind! Color this explorer well.

Even though we celebrate the 12th of October for the discovery of America, there is a controversy that Columbus had actually planned to go to India and accidentally stumbled upon the ‘New World’. The celebration therefore also serves as a reminder of this fact to the Americans and the Spaniards. Use your brush well.

Even though America was discovered in 1492, it was only 400 years later in 1892, that President Benjamin Harrison declared it a legal holiday. Color his ship well. 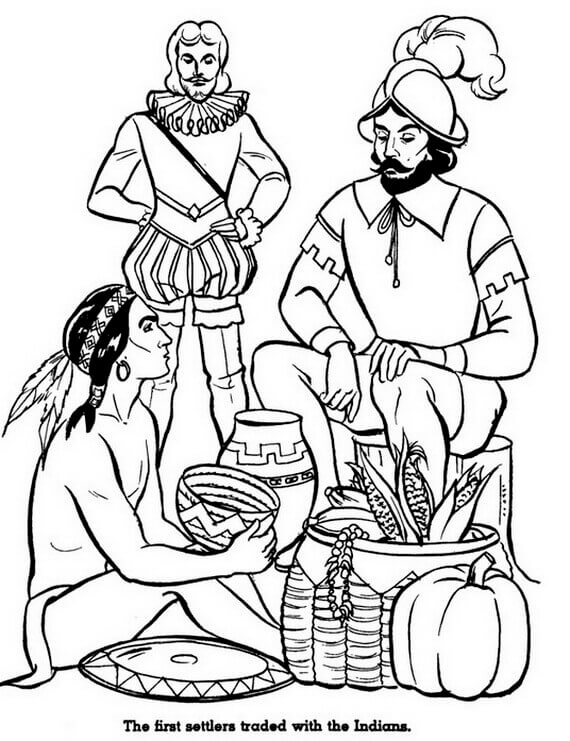 Columbus and his men arrived at the Bahamas shore, armed with swords and the natives who were like Indians then brought them food, water, and gifts. Colour this strange meeting.

La Nina was one of the three Spanish ships used by Columbus in 1492, on his voyage to the West Indies. La Nina was a nickname and the ship’s original name was Santa Clara. Colour Nina like she is yours.

La Pinta or ‘The Painted One’ was the fastest of the three ships, Christopher used in his journey. Color the fast surfer well.

Columbus had three ships: La Nina, La Pinta, and the Santa Maria. Paint this ship carrying the sailor to the ‘New World’.

Having already colored La Nina and Pinta leaves us with one, the Santa Maria! Colour this beautiful majestic ship with respect.

Contrary to popular belief, Christopher Columbus didn’t set sail to prove that the earth was not flat. The flat-earth surface was already proved wrong by the Egyptians long before Columbus’s time. Instead, the explorer was supposedly in search of India. Let your colors flow.

A voyage to distant lands was bound to entail some heavy costs. And Columbus’ voyage refused financing from three different countries: Portugal, Europe, and France. The refusal was because it was believed that his calculations were utterly wrong. Colour this not so great mathematician.

In 1492, on Christmas Eve, the flagship, Santa Maria was run into a coral reef, off of what is present-day Haiti by a cabin boy. The entire Christmas was spent rescuing the ship’s cargo. So, when Columbus reached Spain in Nina, the other ship, he had to abandon about forty of his crew to start a new European Settlement. Interestingly, all of the abandoned crew had died. Brush him well.

By now, you know ample about this explorer of the sea. Let us answer some questions now! Who was he? How would you describe his character? What according to you makes him special?  Do you too want to sail the oceans like him? Let us color this page and get some answers.

Almost 200 years after the discovery of the island of Manhattan in 1626, Peter Minuit, appointed director-general of New Netherland bought the island from the Lenape Indians in exchange for trade goods worth just $24. Colour this highly economical deal.

Do you wish to go on an adventurous journey in search of other countries? Then dress well, borrow a hat, purchase a spyglass, built a ship, gather your sailors, and set sail. There may still be someone hidden out there. Color this before sailing away.

Columbus has set his foot into the ocean at the young age of just fifteen. And since then he had never looked back. His three ships were given to him by the city of Palos. Color the magnificent ship properly.

Columbus was a brutal man. He committed unspeakable atrocities on the natives of the islands he set foot on. He terrorized the local population. Paint the atrocious conqueror.

How did you find Christopher Columbus? What kind of a man was he? Was he just an explorer? Or an enforcer of his rule? Was he well versed with the knowledge of his craft? Or did just love sailing? Ponder over all these questions as you fill Christopher Columbus coloring pictures printable.