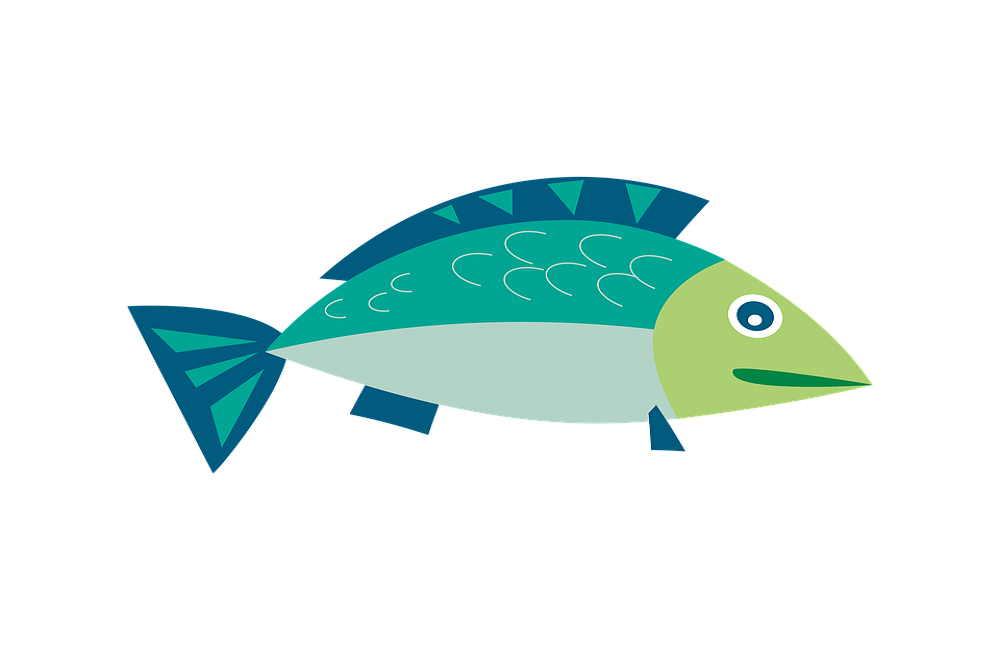 Fish come as varied in shapes and sizes as any living being, if not more. To generally identify a fish, they will have to be, of course, aquatic beings, a vertebrate having a spinal structure and using gills to breathe in water. For most of us, the first experience of seeing a fish might be in an aquarium or as food on our dinner tables. If you live near a source of water, you might have even gone for fishing expeditions with your parents or grandparents. Be prepared to be surprised by the different kinds of fish, including those that are generally mistaken to be fish, in this collection of fish coloring sheets to print.

Angelfish is a genus with three species, known scientifically as Pterophyllum. As you can see in this illustration, Angelfish have almost flattened round bodies with long fins. They also have stripes, helping the Angelfish to camouflage while they hunt for food as they are ambush predators.

Popular as food, Barracuda is a saltwater fish enjoyed as a great fish ingredient around the world. Barracudas have an elongated body, large head, and jaws with irregularly-sized teeth. Usually dark gray and silver in color, there are nearly thirty species of Barracudas found around the world.

Gamefish are fish which are widely used for recreational fishing purposes and Bass is one of the most popular gamefish. Bass fish come in several different types of freshwater and marine varieties.

The first thing you notice about Blue Marlin is their long bill, which they use to hunt their preys. Belonging to the genus Makaira, there are two species of Blue Marlin – Atlantic blue marlins, which are found in the Atlantic Ocean and Indo-Pacific blue marlins, inhabiting in the Pacific and Indian oceans.

Bluefish is among the several species of fish that are pelagic, meaning they live in an area of water that is neither too close to the ocean bottom or to the water surface.

Teaching important life lessons, now that her baby fish is growing up fast, mama fish tells her son the most important thing to stay alive and survive in the water. To never take the bait, otherwise, once he gets hooked, he’ll surely end up dead.

The long, whisker-like barbels on the mouth of the Catfish is what led to them being named as Catfish. They are found in different regions around the world, ranging in different sizes and showcasing varied behaviors.

If this fish looks very familiar to you, it’s because one of its kind was the star of Disney’s Finding Nemo animated film. Another of its kind became a star of the sequel, Finding Dory. Clownfish have a colorful appearance, hence their name, mostly yellow or orange with patches of white.

Giving you a sense of the different varieties of underwater fishes there are in this world, this coloring page contains several different species. Once you start to spot the different fishes and identify which one is which, you can start giving each of them their appropriate colors.

One of the most loved aquatic animals, dolphins are not actually fish. They are mammals and unlike fish, they need to reach the surface of the water to breathe in air through their lungs. Now that you know, remember to politely correct others if they too are mistaken.

Elongated and slippery, Eels are snake-like fish that have close to 800 different species. They mostly live in shallow waters.

It’s time now to test your handwriting skills. Print this coloring page that clearly lets you know which letter of the alphabet you are going to practice writing. Yes, it’s the letter F, the first letter of the word “Fish”. Now, start writing both the capital “F” and small “f” letters in the space provided.

This illustration may seem like a maze to you but there is a fish in there somewhere. Simply start coloring according to the numbers. Color the areas marked 3 with light blue for water and the areas labeled 2 with yellow for fish.

The oceans and seas are home to several different types of fishes and there are different plants growing on the bottom. Looking at this illustration it seems like the fish are in an underwater forest with some weird long, leafy trees.

Must have been a good day for this fish in the water. With its wide-open eyes and open-mouthed smile, you can imagine how happy this fish is looking today.

Here is Nemo, the clownfish attending his school along with other fish in “Finding Nemo”. The giant spotted eagle ray is their schoolteacher called Mr. Ray.

Taking a funny idea into an even funnier illustration, this coloring page shows us how it would look like if the fishes started fishing. The fish even has a hat on like most fishermen do to protect from the sun. Print this funny illustration and give it some fun colors.

The most low-maintenance form of keeping an aquarium is to have a fishbowl. While most fishbowls tend to house just a single fish, especially goldfish, this one has two fish to keep each other company.

No matter how deep an ocean is, it ends in a bottom terrain, maybe sandy or rocky. This illustration shows different types of fishes in a deep underwater gorge in the ocean.

The always happy tropical fish, Flounder is one of the main characters in Disney’s animated feature film “The Little Mermaid” about a mermaid named Ariel. Blue and yellow in color, Flounder is Ariel’s best friend.

Fish spend a majority of their time swimming around. Some are looking for food, while some swim closer to the surface for warmth. If there is no danger of predators around, then they freely swim around like these group of carefree fishes.

It’s plain to see why these fish are called hammerhead sharks. Their heads form this hammer-like flattened structure called cephalofoil. You can also notice the peculiar placement of their eyes. Contemplate about this oddly captivating fish while you print and color it.

This gelatinous creature with umbrella-like structure and long tentacles with stinging cells is popularly known as Jellyfish, although they are not fish. New nicknames like Jellies and Sea jellies have been developed to avoid this confusion. Their stings are injurious to humans and every year thousands of people get stung while swimming out in the water.

Just like you find different animals in the zoos, fish are kept in an aquarium for people to visit. These two kids are transfixed looking at the fish, especially that huge shark floating around on top. Give this thrilling aquatic experience some adventurous colors.

Their name comes from two of their characteristics. Firstly, they have spots similar to the leopards and secondly, they swim fast like the darts you throw in dart games. Take a look at the highlighted region in the map to figure out in which states these Leopard darter fish are found in the United States.

The genus of cartilaginous fish, Manta, comprise of large rays called Manta Rays. There are two species in total, larger one reaching 7 meters wide while smaller is about 5.5 meter. In 2011, the International Union for Conservation of Nature (IUCN) listed them under Vulnerable to extinction status.

Perch fish are freshwater gamefish, widely distributed around the world in ponds, lakes, and streams. Having a slightly long and rounded body, Perch fish are classified under the family Percidae.

Fish species belonging to the genus Esox are called as Pike fish. These are freshwater fish having an elongated body with a pointed head, known to grow to a length of about six feet. Generally grey-green in color, Pike fish have patterns that are unique among individuals, much like fingerprints in humans.

With a reputation of a killer in popular culture, Piranhas are deadly freshwater predator fish. Found in their natural habitats in South America, there are around 40 identified species of Piranha. Most notable among them is the Red-bellied piranha. They have a powerful bite force with teeth on upper and lower jaws that are well-aligned and interlocking.

From one deadly fish to another fish that can be lethal to humans. Belonging to the family Tetraodontidae, almost all the species of Pufferfish are poisonous. The poison is due to the toxin, tetrodotoxin present in different parts of the Pufferfish depending upon the species.

Seahorse is one of many unique creatures of the sea. Resembling the head and neck of a horse, Seahorse belongs to the genus Hippocampus with a total of forty-five different species. They look so marvelous, don’t they? Their curled tails are prehensile, meaning it is able to hold or grasp objects much like the tails of most monkeys.

This roundish, elongated fish is named Swordfish because of its long, pointed and flat bill that is used to slash through the bodies of their prey. Extremely migratory in nature, you can find Swordfish inhabiting parts of different oceans like the Pacific, the Atlantic, and the Indian ocean.

One of the most widely commercialized fish in the world, Tuna is a saltwater fish. There are fifteen Tuna species under the tribe Thunnini, exhibiting varying sizes, weights, and lifespans. Tuna fish is among the only three fish species able to manipulate and keep their body at a much higher temperature than the water around them.

With the scientific name of Pristella maxillaris, X-ray fish are called as such because of their translucent body, allowing you to see their bones. Just like the illustration here, when you see an X-ray fish in real life, you will be able to see their bone structure on closer inspection. They are also highly adaptable fish, making them a popular choice among the species of fish kept in a home aquarium.

With that almost see-through X-ray fish illustration, we are also through with today’s eclectic and interesting collection of fish coloring pictures to print. Hope you were as fascinated by the varied world of fish as it was for us to show and describe them for you. This was only one variety of aquatic creature. Imagine the several others that inhabit the underwater world in our multiple oceans and seas around the earth. You can contemplate on that thought while you color this fascinating collection of fish coloring images to print with your family and friends.