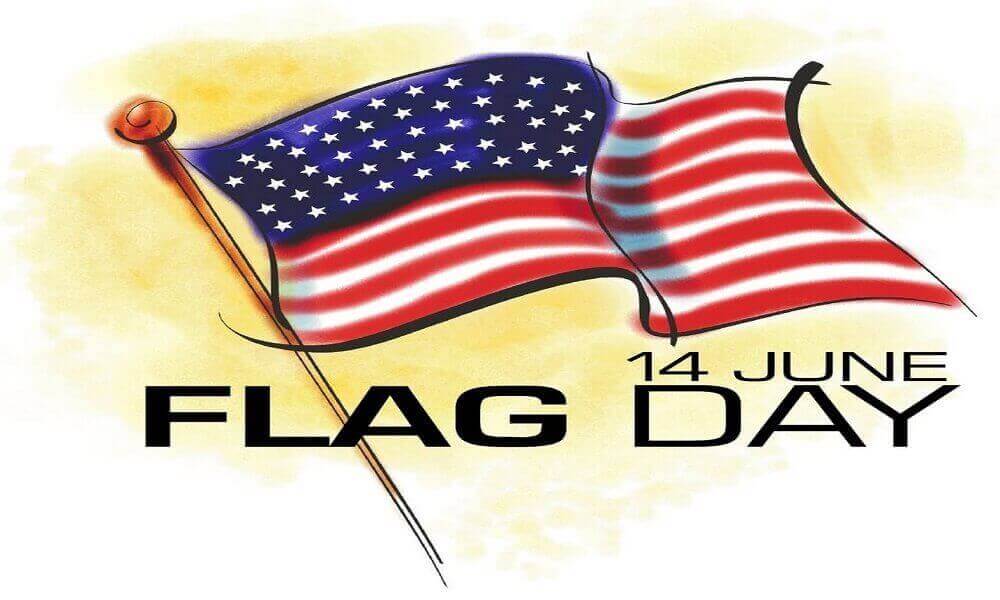 Hello friends, today we’ll educate you about the Flag Day through our free printable Flag Day coloring pages. June the 14th is celebrated as Flag Day in the United States of America. This was the day in 1777 when America adopted its first flag. One Betsy Ross is credited with designing America’s first flag. It had thirteen red and white stripes to represent courage and purity respectively. Also, it had thirteen stars representing the initial number of states, embedded on a blue patch at the corner where blue stood for justice. As the number of states increased, stars were added to the flag.

As of today, the flag has 50 stars, in accordance with the number of US states. Initially, the flag was associated only with the military and it was only later that people began relating to it as a symbol of unity. A teacher of the Stony Hill School in Wisconsin named Bernard J. Cigrand first encouraged his students to celebrate the birthday of the national flag in 1885. The fervor spread like wildfire among other schools and gradually crept into other institutions as well. Finally, in 1916 president Woodrow Wilson announced the 14th of June as the Flag Day, bestowing it with the deserved official status. Citizens all across the country hoist the flag on this day to commemorate the birth of the national flag and as a sign of patriotism. Learn a bit more about this holiday with our free Flag Day coloring sheets to print.

Here the majestic American Bald Eagle flying against the national flag. The bald eagle is the American symbol, which was selected as the national emblem on the 20th of June, 1782. It was made the emblem owing to its strength and majestic looks and also because it is believed to be exclusive to the continent of North America. Color this endangered beauty against the high flying American Flag.

The origin of the US flag has a lot of stories and a fair number of conspiracy theories. One version states that three members of a secret committee approached Betsy with the proposal of making the first American Flag. These three individual were George Washington, the then head of the continental army, Robert Morris and Colonel George Ross. This story holds some ground as Betsy was already acquainted with George Washington and related to Colonel George Ross. It is today widely accepted that Betsy Ross was the maker of the first American Flag. Color the noblewoman presenting the national flag, standing as a symbol of patriotism and inspiration to American women.

The American Flag is also called the Star – Spangled Banner. Flag Day plays a pivotal role in raising awareness in the populace about the heritage of the American Flag and the freedom struggle. The two kids holding the national flag high is a sign of that instilled patriotism. Color the adorable duo as they pay homage to the nation.

The National Flag of Canada Day has been shortened to Flag Day. It is celebrated on the 15th of February to honor the national flag which was first raised on this day in 1965 over the Parliament hill. The Canadian flag is red in color with a white square in the center and an 11 pointed Maple Leaf. Color this symbol of freedom, peace, respect, and justice.

The Canadian national flag is unofficially known as the Maple leaf. In 1964, there was an issue raised about the absence of a national flag in Canada. The Maple Leaf was selected out of three designs to be the national flag of Canada. The maple leaf has always served as a symbol of Canadian unity and sovereignty. Color the flag in Red and White.

Flag Day is celebrated all over the US with certain conventions which are to be followed. The US military takes the honor guard on that day to honor martyrs of the nation. The bodies of the soldiers are draped in the flag which is then folded thirteen times in synchrony and presented to the family of the deceased. Watch an honor guard ceremony to understand the emotion attached and color the soldier with the flag.

The American flag is also called Old Glory. The resolution stated that there must be 13 stripes, red and white and 13 stars. It, however, remains silent about the arrangement of the stars or the points in each star. Hence, some flags have stars in columns while others are in a circle. Usually, the stars are either six-pointed or eight-pointed. Color the American emblem with the Old Glory.

Betsy Ross made the first American national flag for General George Washington. It is said that Betsy was chosen for the task because General Washington was already acquainted with her. Betsy visited the same church as General Washington’s and it was here that the General became aware of her sewing skills. He would often call upon her to sew different parts of his uniform. Color the woman who could cut out a five-pointed star in a single snip.

On the 15th of Oct, 1781, the last British stronghold in America fell. Charles Cornwallis surrendered along with 8000 soldiers to a combined American and French force, primarily led by General Washington. Following this, the British negotiated a truce and the American Revolutionary War came to an end. Color this historic moment of American glory.

This is the US star-speckled banner embedded on a hat. It is a matter of privilege to be able to wear the US insignia on a hat. Color the stars and stripes.

On February 19th, 1945, the brave US Marines invaded the island of Iwo Jima which against heavy Japanese artillery fire, from caves, tunnels and dugouts. Iwo Jima was a strategic base for the Japanese and hence this attack was launched, called Operation Detachment. After a month of intense fighting and bloodshed, the US flag was finally raised on the 26th of March, 1945. This was a huge morale booster for the US army and the invasion is one of the most renowned folklores of World War II. Color the valiant marines.

Flag Day is celebrated to honor the adoption of the American National flag on the 14th of June, 1777. Betsy Ross is credited with designing the first American flag. The flag had 13 red and white stripes and thirteen stars to depict the number of states. In the initial design, the stars were arranged in a circle on a blue patch. As the number of states increased, the stars were arranged in rows and columns. Color Betsy Ross sewing the first flag with her hands.

Flag Day is celebrated with great military pomp and show in the States. This group of onlookers is probably cheering on a marching band or a military parade. Color them as they proudly hold their national flag.

Neil Armstrong was the first man to land on the moon. On July 20th, 1969, the American put his left foot on the moon which he claimed to be a giant stride for mankind. Color the Star – Speckled Banner flying high on this revolutionary moment.

Here is a free poster for you to color and commemorate Flag Day. Print this out and let the American Flag adorn your walls.

Here is another arrangement of the stars and stripes insignia for you to color. Add your twist to it and wear it around. 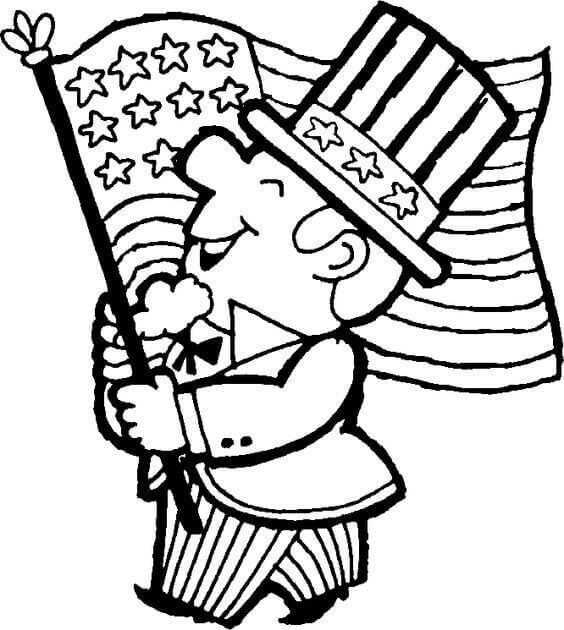 During the war in 1812, the beef supplied to the US troops carried the logo of Uncle Sam. Since then Uncle Sam has become a personification of the US government. Supposedly, Uncle Sam was named after Samuel Wilson, the businessman supplying the beef. Color Uncle Sam with the American National Flag.

Here is the current US flag after undergoing changes in the number of stars. Color the flag and wave it.

The US Flag is also known as the Star – Speckled Banner, Stars, and Stripes or Old Glory. It currently has 50 stars arranged in alternating columns of 6 and 5. Call it what you may and color it with reverence.

Flag Day was first celebrated by the United States of America and today over 40 nations have their distinctive flag days. It is essential that the citizen of a country, soldier or civilian, revere its national flag. It should not be so that we care about the national flag only on that day but Flag Day should remind us of our martyrs, freedom struggles, and formation of our nation. There are certain customs related to the handling of a flag that must be adhered to. Read up on the conventions of your flag as you fill these Flag Day coloring pictures.