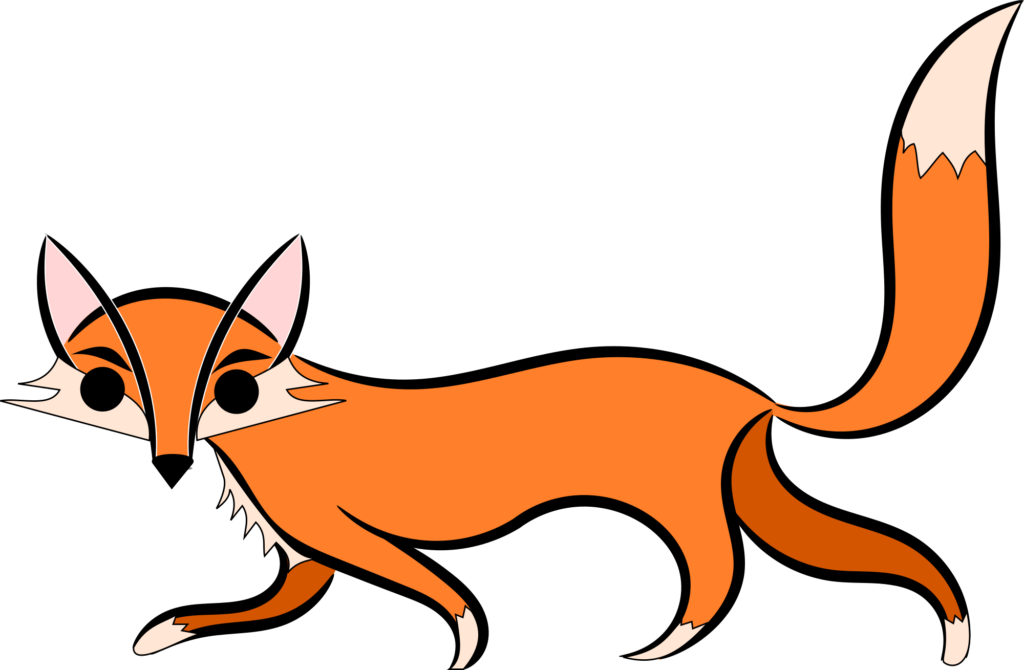 Hello children! We are continuing with our special collections of coloring pages dedicated to animals. You must have enjoyed coloring the farm animal collections including cows as well as collections inspired by wild animals like tigers, sharks, and giraffes. Today’s collection is about an animal who has unfortunately earned the bad reputation of being too cunning. You guessed it right. We’ve got you free printable fox coloring pages.

Ever present in several folklores and fables in many cultures around the world, foxes are omnivores mammals belonging to the family Canidae and ranging from small to medium in size. They are widely distributed, inhabiting every continent in the world except Antarctica.

One of the smallest members of Canidae family, foxes have flattened skull, triangular face, pointed ears, long rostrum, and bushy tails. Different species of foxes differ from each other in their fur length, density, and color. One of the most prominent species among them is the Red fox, known for its auburn fur and being the most common. Without further ado, let’s venture into this wild ride of discovery through this collection of fox coloring sheets to print.

Starting off our collection today is this illustration showing a fox at home in its wild environment, looking happy as ever. As it’s said, “Home is where the heart is”. Just like how you love your home, this happy fox loves its home – the wild.

On the other extreme of happy, is this animated drawing of an angry and agitated fox. This dramatic illustration depicts the angry fox showing its anger with his open claws, flared up fur and an open mouth baring its sharp teeth.

A baby fox is known as a cub, pup or kit. You can find the characteristic of a fox-like the upright ears and bushy tail in this illustration. Print this coloring page and make sure to fill it with the right colors.

Generally, four to five cubs are born to a mother fox in a litter. There are exceptions like in the case of Arctic fox, which can have a litter size of about ten kits. This mother and baby fox duo seem to be enjoying a relaxing time together.

Can you feel this fox staring straight into your eyes? This is a simple yet clever illustration of a cartoon fox with a front profile and eyes that seem to follow no matter from which angle you look at it. Print this page and color it properly, this fox is watching you.

Since today’s topic is the fox, we are focusing on the letter F of the English alphabet. Look at how even the fox is trying to learn the letter as well. Print this coloring page and you can practice writing the capital “F” as well as small letter “f” while coloring it.

Here is an example of a fox in popular culture. Flick is the pet of Felicity Fox, a humanoid girl with fox characteristics from the Enchantimals toy franchise world. Created in 2017 by Mattel, the toy franchise Enchantimals includes books, series and television specials.

Getting creative with a fox head drawing, this illustration shows a detailed and artistic interpretation. It looks like a kaleidoscopic representation of a fox. Even the eyes look so enigmatic. Print this coloring page and give this intricate fox head illustration your best imaginative coloring skills.

One of the most popular fables, “The Fox And The Grapes” forms part of a collection known as Aesopica or Aesop’s fables. Aesop is the name of a slave and storyteller in ancient Greece credited with this story among several others. The story is about a fox who tries to reach for the grapes but never succeeds, ultimately giving up saying the grapes must be unripe and sour. The expression “sour grapes” originated from this story.

The relation between a predator and prey is simple. A hungry predator sees prey, it has to go after it, like a habit. In this fun illustration, that’s exactly what this fox is doing who has just seen a rabbit out and about in the open.

To warn intruders that wander too close or are trying to attack them, foxes emit an open-mouthed combative call. In addition to the sharper bark, their posture and stance changes in defensive mode, ready to go into attack mode should the need arise.

Standing atop a rock, this curious illustration shows a fox upright on its two hind legs, surveying the forest. What do you think it is looking for? Maybe trying to find prey or watching out for predators.

This illustration truly captures the cunning reputation foxes have in popular culture. You can see the sly expression with the raised eyebrows and open mouth, expertly captured by the illustrator.

Foxes are omnivores and can eat invertebrates, small vertebrates as well as plants. While hunting for its prey, this fox is filling up its stomach with some fruits and plants it finds along the way.

A rectangular body, triangular ears, circular stomach, and round snout, this creative illustration of a fox is clearly inspired by geometry. You can go wild with your imagination as well while coloring this illustration.

In the book “Fox In Socks” by Dr. Seuss, Fox in Socks is an anthropomorphic fox. In the story first published in 1965, Fox in Socks is one of the two characters who talks only in complex rhyming tongue-twisters which the other character Knox is unable to follow.

Foxes are found in varied regions with different climatic conditions including deserts, urban areas, alpine, and forest. Most of the species found in forest like this fox here are finding it difficult to sustain themselves due to deforestation and human encroachment.

An art project you can create inspired by foxes. First, print this coloring page and give this fox mask template an eclectic mix of colors. Once you are done coloring, carefully cut the outline and attach threads on both the sides of the face. Your fox mask is ready to be used!

It looks cozy and warm here on this coloring page. This fox is enjoying a good night’s rest curling up its whole body into a ball, looking much smaller than it actually is. Offer it some of your warm colors using your soothing brush strokes.

Another of the popular story in the collection of tales titled Aesopica or Aesop’s fables. The story is about a fox that plays a game of flattery with a crow that had picked up a piece of cheese to eat. Giving in to the fox’s compliments, the crow opens its beak to caw, releasing the cheese. The cunning fox happily eats the cheese.

Creating a superhero out of a fox, this illustration gives the fox elements of a superhero costume – a mask and a cape. You can contribute to this vision of a fox superhero by deciding on the colors for the costume.

Giving an endearing quality to it, this illustration showcases the fox as a lover of flowers. Are you wondering why it is carrying a flower? Perhaps, it wants to woo a fox mate like humans give flowers to their dates. Or maybe it just likes flowers as most of us do.

With those anthropomorphic or human-like eyes, who can blame anyone for finding this little fox so cute and adorable. This is one of the reasons why we can relate to animated animal and toy characters in movies.

Appearing in the ever-popular and Oscar-winning 2016’s animated film Zootopia, is Nick Wilde, an anthropomorphic Red fox. Nick plays a con-artist helping the main character, Judy, a rabbit cop and ultimately fulfills his long-forgotten dream to be a cop himself.

Known as Fennec fox or simply Fennec, the North African fox is a small fox inhabiting the Sahara of North Africa, South East Israel, Sinai Peninsula, and the Arabian desert. They are the smallest fox species and can easily be distinguished by their unusually large ears.

After the anthropomorphic illustrations, we have a realistic depiction of a fox in its natural environment here. You can even appreciate the fine fur detailing. Fox’s fur may undergo changes according to seasons, thicker in winter and lighter in the warmer period.

Preschoolers can learn to color using this easy Red fox illustration. The largest among the fox species, Red fox is also among the most widely distributed, resulting in the International Union for Conservation of Nature (IUCN) listing them as Least Concern.

The red fox is highly adaptive to a new environment, which is why the species is found in almost every part of the world. It also has the largest number of subspecies. Altogether there are over 40 recognized subspecies of Red fox.

Named after its fur color, Red fox has an auburn pelt and long tail that ends in a white tip. However, there have been cases where some Red fox individuals bear a pelage or fur that are of a different color.

Sitting comfortably in its habitat, this fox looks like it is smiling at you, doesn’t it? Capture in color all the details of the environment along with the fox and of course that happy expression.

Attributing to the popular idea or misconception about foxes being cunning and sneaky, this illustration shows a fox stealthily able to walk away unheard after stealing. The ever-popular cunning smile is very well depicted.

While male fox can be termed as dogs or tods, female foxes are called as vixens. This elegantly dressed vixen is doing some flower shopping today. Print this page and give pleasing colors to her dress and the flowers.

To conclude this collection, we have a cool illustration showing a vixen posing with a flower. Print this coloring page and fill it with wonderful colors.

Foxes can live up to ten years, but in general, most have a lifespan of a year in the wild. You can find different types of foxes living in different habitats around the world. There are snow dwelling Arctic foxes, desert thriving Fennec foxes and even regularly tree climbing Gray foxes. As widely spread and adaptive as foxes are, they are becoming endangered in their endemic or native environments. We hope through this collection of fox coloring pages printable you were able to know more about these often misunderstood creatures.