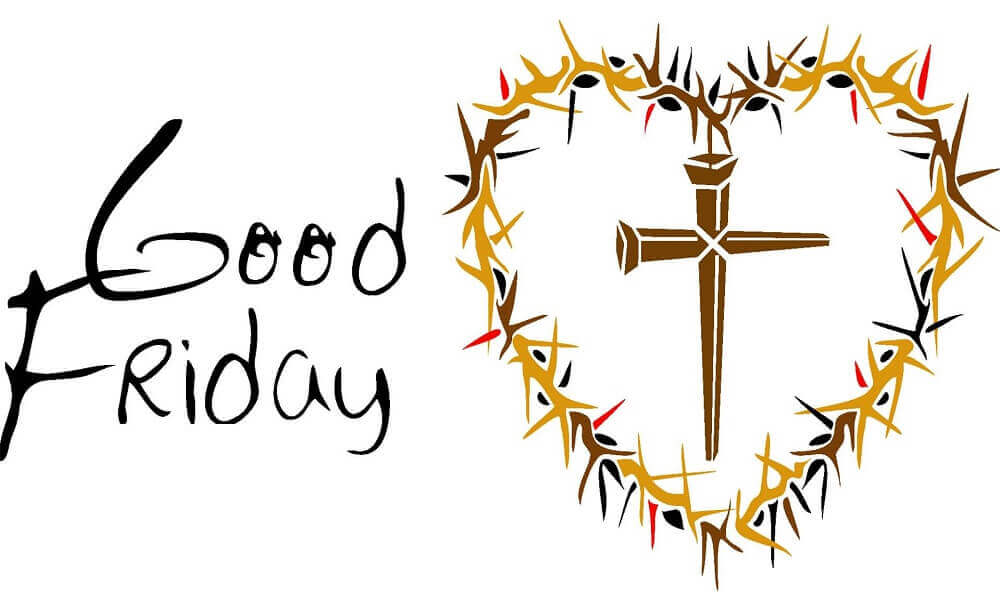 Good Friday, celebrated on the Friday before Easter, is the day when Jesus Christ died for our sins. It’s the day Jesus Christ was betrayed by his friends, and condemned to death the worst way possible. He was forced to carry a huge cross up to Calvary hill. Every year, on Good Friday, the Catholic Churches put up these things in a display so that we can see the torture Jesus Christ, the son of God, endured, just for us, human beings. Furthermore, people even abstain from eating meat, as it’s considered a mortal sin to feast on meat these days. To commemorate this holiday, we’ve got our readers a collection of free printable Good Friday coloring sheets. You can check out all these Good Friday coloring sheets below.

This heart rendering Good Friday coloring sheet features Jesus Christ being taken down from the Cross. When Jesus was at the pinnacle of his miracles and ministry, Jews also started to believe in him as the Son of God. Seeing his growing followers, Judas Iscariot, with the help of Roman Soldiers arrested Jesus, accusing him of claiming to be the king of the Jews.

This Fourth Station Good Friday coloring sheet shows bleeding Jesus meeting Mary on his way to the hill. It was a tough moment for Mary to see her son this way, but Jesus felt glad, that at least her mother is there by His side, in His suffering.

Here’s a simple Good Friday coloring page featuring wrapped around with beautiful flowers. Lily, which you can see in this coloring page is a symbol of purity and goodness. This coloring sheet has both broad and intricate lines, which means both kids and teens can enjoy it.

Here’s a coloring sheet of Jesus nailed to the cross while others look. It’s said that the crucifixion of Jesus was God’s plan. The kind of sins humankind had committed required a sacrifice, and Jesus was sent to earth to redeem for the sin. Jesus lived a sinless life, but went through utmost torture so that man could receive salvation.

This heart rendering Good Friday coloring picture shows Jesus’ body being carried to the cave for burial. It’s said that the death of Jesus marked extraordinary events. The sky went completely dark for three hours even when it was daytime. And when Jesus breathed his last, the tombs of the saints opened and they raised from the dead, the earth shook, and the temple curtain split from top to bottom.

This coloring sheet shows Simon of Cyrene helping Jesus Christ with the cross.  It’s believed that Simon’s act of carrying the cross for Jesus on the 5th and 7th stations is considered as a message. It’s said that Simon was chosen for it because he must have shown sympathy for the Son of God at some point or the other.

This coloring sheet shows the denial of Jesus Christ by Saint Peter. When Jesus was arrested, Peter completely denied knowing him, that to three times. Jesus had already predicted that Peter would deny knowing him before the rooster crowed the next morning and that’s precisely what happened. However, after the third denial, when Peter heard the rooster crow, he started crying bitterly, thereby repenting.

This Good Friday coloring image illustrates the soldiers thrusting the crown of thorns on Jesus’ head. This wasn’t the only torture Jesus was subjected to. He was also made to carry a huge cross along the pathway of the hill where he was crucified.

Here’s another coloring page of Jesus Christ on the cross. The women are crying bitterly seeing Him in this condition. When Jesus was on the pretorium, he was mocked, scorned and even tortured by the Roman soldiers.

This is one of the most heartbreaking Good Friday coloring sheets as it shows the nailing of Jesus to the cross. People had gathered to watch and mourn the death of the Son of God. Jesus even promised one of the criminals beside whom he was crucified, that he would be with Him in paradise.

Here’s a coloring sheet of Angel Chamuel who helped Jesus Christ before his crucifixion. Jesus had gone to the Garden of Gethsemane to pray after the last supper, where He met the angel. Angel Chamuel comforted Jesus and motivated him for the challenge lying ahead.

This is one of the best Good Friday coloring pictures as it shows Pilate washing his hands in front of the crowd. Pilate was reluctant to punish Jesus, but since people wanted to see Him die, he announced the trial. But before that, he washed his hands in front of everyone to symbolize that he does not take the responsibility for the bloodshed of Jesus.

This Good Friday coloring sheet shows Jesus being taken before Pilate for His sentence. Pilate also tried to release him, however, the crowd wanted Barabbas, the prisoner to be released instead and Pilate gave them what they wanted.

This Good Friday coloring page shows Mary Magdalene kneeling before Jesus. While the other women left, Mary stayed put. Mary Magdalene was a Jewish woman who traveled with Jesus as a follower. It’s said that Mary Magdalene witnessed both crucifixion and resurrection of Jesus.

This coloring sheet illustrates the second station of the cross when Jesus was handed over the cross to bear all the way to the Calvary Hills. Jesus knew that it wouldn’t be easy, yet he accepted it and carried it as he was told.

Indeed, nobody can love us more than Jesus. He died for the sins of his people, redeeming them in the process. So what could be better than this Good Friday coloring sheet, featuring a cross with lily flowers at the bottom. What truly touches the heart is the wording on this coloring sheet, “Jesus Loves Me”.

Here’s a coloring sheet of Jesus praying in the Gethsemane garden. After eating his last supper with the disciples, Jesus headed to the Gethsemane garden for his payer. He was worried that one of his disciples would betray him, which would lead to his arrest and later, crucifixion. He went through an intense mental and spiritual war in the garden.

Here’s a coloring sheet of the 10th station of the cross when Jesus’ clothes were taken away, just to give him utmost torture. People teased him and even challenged them to perform a miracle. Little did they know that He’s the greatest miracle of all.

Here’s a wonderful coloring page of the last supper, the final meal, which Jesus shared with his apostles before this crucifixion. Christians commemorate this event every year on Maundy Thursday, a day before Good Friday. It was in this supper Jesus Christ predicted Judas’ betrayal.