Greetings friends! So, there is this place in the Alwar district of Rajasthan, named Bhangarh Fort. The legend states, that once a beautiful princess, Princess Ratnavati lived in the walls of the palace. One day, a local black magician fell in love with the princess. So, he bewitched one of her cosmetics to make her fall in love with him. But the princess was smart. Suspicion caught her, and she foiled the magician’s plan by throwing away the cosmetic and having the magician condemned to death. But just before he breathed his last, the magician placed a curse upon the land that no one would live in peace there now ever. And the land has been considered haunted ever since. And now you must be wondering why we’re telling you this story. That’s because we’ve got you some spooky free printable haunted house coloring pages. Check out the haunted house coloring sheets to print below and color your fear away.

That house looks particularly delicious. A house made of cookies and white chocolate to tempt little kids into that place. But look at those ghosts, they seem so friendly. Maybe not all ghosts want to haunt you but just want to play with you every once in a while. Go color that ghost of the ‘Delicious House’.

Looks like even ghosts don’t want to lag behind in knowledge. But what could he be reading? He doesn’t belong to the world of mortals anymore. Oh, wait! I know! There are exams to prove who’s the best ghost of them all. Looks like academics won’t leave your side ever. Let’s color this nerd of all ghosts.

Don’t you dare enter that house! It’s a moonlit night and ‘Papa Ghost’ with ‘Child Ghost’ is out on a hunt. They will capture all the children roaming discreetly past their bedtime, without their parents’ permission. Stay in bed tonight, be safe, and color this picture instead. It won’t haunt you.

There is a poem, ‘The Listeners’, by Walter De La Mare. It’s about a traveler on a horse who has come to this house on a full night, to fulfill a promise made long ago. Only now, he is here, and no one has answered his knocks on the door. There is an eerie silence, yet it feels to the traveler that his voice was heard by someone. Let’s find out who it was by coloring this picture.

Dracula is a blood-sucking demon. And he prefers his victims to be women. So, girls, beware! Dracula being a vampire is sensitive to sunlight but has incredible skills like super speed and shape-shifting himself into a bat. Color him brightly, before he comes for your blood.

‘Monster House’ is a movie by Gil Kenan, released in 2006. Apparently, the house was possessed by the soul of the woman of the house and her husband was trapped inside. Three neighborhood teenagers who discovered the truth about the house set out to save the old man and free his wife’s spirit. Let’s color this page before we head to the movie.

Do you remember the last time you visited a forest? Don’t you remember seeing a wooden house with a big ‘X’ marked on it? There was a reason for that. That house was haunted. The locals were scared too if you had noticed. The lesson for you is, don’t wander alone into a forest. Color this to remind you of this fact.

Some houses are haunted, while others, just look like they are haunted. Either way, we tend to stay away from both. Because who knows, what lies ahead. Prevention is indeed better than cure. Now, since you can’t visit that house now, satisfy your senses by coloring it instead. Let your imagination run wild.

Halloween is a holiday celebrated each year on the 31st of October. On this day, children dress up as their favorite monsters. People decorate their homes to give them a haunted look. Pumpkin carving is a very popular activity. And at night, children go to the neighbors to collect candy. Let’s prepare for Halloween by coloring this page.

There is a novel by Oscar Wilde, ‘The Canterville Ghost’. The story revolves around a child named Virginia, who sensitizes the ghost, Sir Simon, who is haunting their mansion. It’s a story about the love a child can carry in her heart and how it can change even the stubbornest of people, or in this case a ghost. Let’s color this poster in memory of Sir Simon.

Over the centuries, through the hands of writers innumerable, a stereotype for certain apparitions and monsters has developed. A house with evil eyes, shut windows, a long stretch of floor, and bats roaming about, shouts of the ‘Layer of Dracula’. Let’s color this evilness of the bloodthirsty demon.

Look white bed sheets flying in the air! Careful, the bats will suck your blood. That tree, why are there no leaves on it? In the middle of it all is a house. Take care children, those are the hallmarks of a house haunted. Color it, because you don’t want to go near it.

Fun Fact: People play dress up on Halloween because it is believed that on October 31, the dead walk the Earth. So, costumes help the living blend in with the spirits, so they don’t get caught. I think it makes sense to decorate your house this Halloween the way you’ll color this page.

Hotel Transylvania is a movie that was released in 2012. It is about a hotel run only for monsters, far away from human civilization. It’s to protect the monsters from humans and not the other way around. Funny, isn’t it? Let’s colour this hotel.

RIP stands for Rest in Peace. There is a grave marked ‘RIP’. But look at that chimney! Clearly, the inhabitant of this house didn’t rest in peace. He is roaming the mortal world all alone and sad. Let’s bring some colour into its life.

Look at that ghost screaming. Maybe he’s screaming because it realized it doesn’t have fingers and now he can’t eat his favorite chocolate. Let’s colour him and probably get him a bar of chocolate too.

You know what would sell well? A ghost-themed hotel! Do you know what would be better? A hotel that is actually haunted. No one could tell the difference between the management playing a prank and an actual haunting. Let’s paint this page and don’t forget the eyes in the window.

Walt Disney World has an attraction by the name of Haunted Mansion. It’s a ride for all age groups. Not so scary, but it is haunted enough to give you the chills. Let’s colour this mansion with some dark colors.

An apparition is a ghost. It is a word usually used to describe ghosts of people. But what if the ghosts of people begin possessing houses? That’s what a House Apparition would be. Let’s colour this human possessed house with beady big eyes.

Dark fact: Parents fear poisoned candy on Halloween. Imagine yourself trick or treating on Halloween. Suddenly a witch in green makeup comes up to you with a candied apple. You take it and then you are magically transported to her evil lair. All of this only to wake up to your mother’s call and realizing you slept while coloring this picture.

That’s a ghost prison folks. And those three apparitions, they are the prison guards. They are warning you, not to come any closer for there is danger ahead you couldn’t ever have dreamt of. So, stop staring and run away from this place. Or you could just pick up those colors and make the prison look less scary. 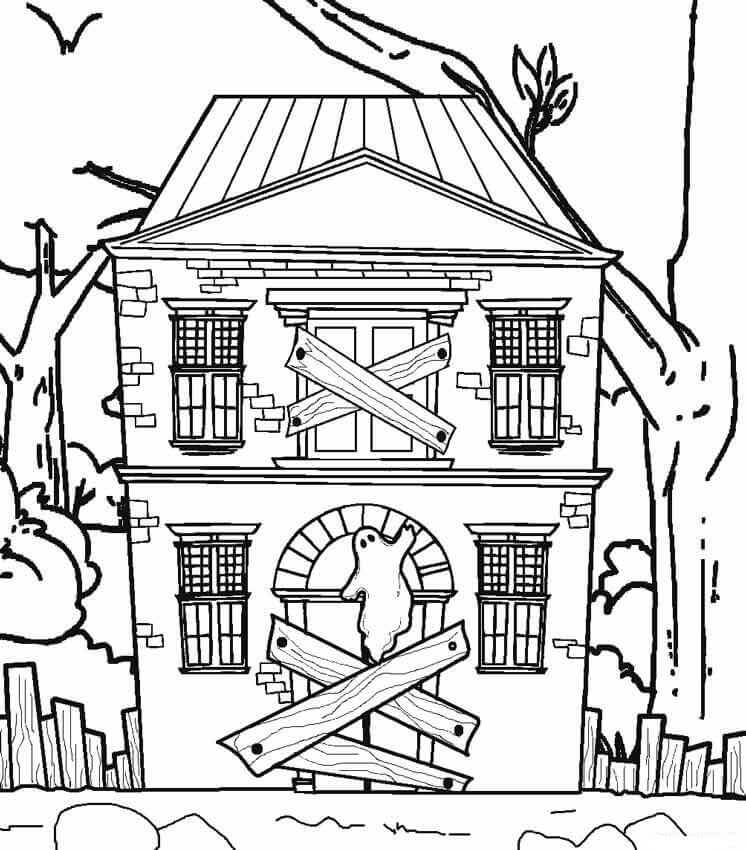 Have you ever thought about why a haunted house has shut windows? I think it’s because the ghost inside wants to be just left alone from the interference of the outside world. After all, everyone deserves peace in the afterlife. Let’s colour this one with the shade white and grey and maybe draw a smile on that face.

“The moon was lit, full and high. There was nothing around except the dark night sky. Silence embraced the ghost-like second nature now. Would he ever be able to live again? Was the question haunting his eternity now!”. Color this image pondering over the confusion of the afterlife.

The biggest seller of a horror story is the Full Moon. But the fact is a full moon on a Halloween night is an extremely rare phenomenon. Colour this celebration with a delight for candies.

There are several tourist attractions around the world that are considered by many to be haunted. Many places even have a supporting history and incidents to prove the fact. Have you ever encountered a supernatural phenomenon in a haunted house? Let us know while you fill these haunted house coloring pages printables.