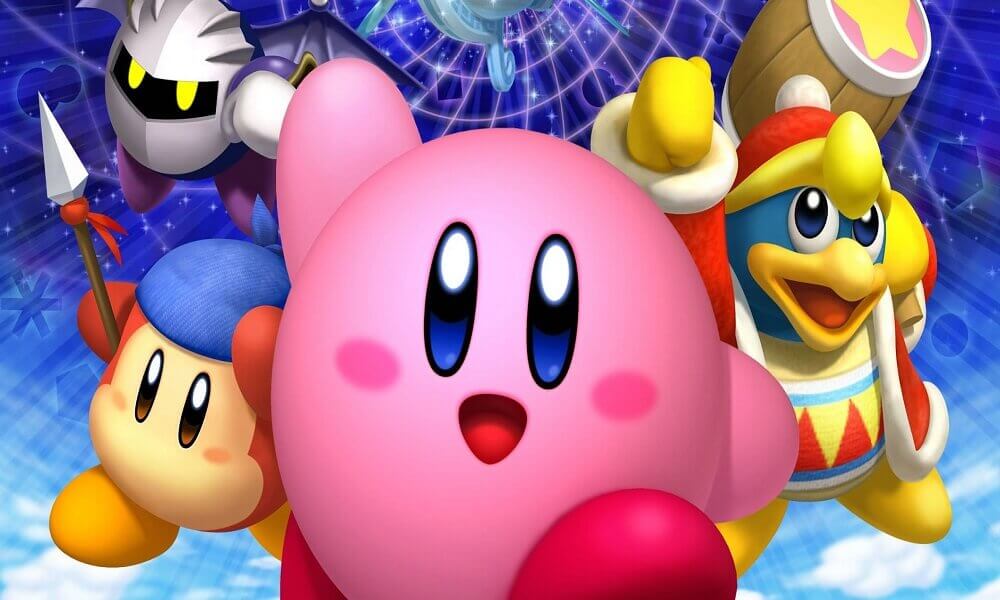 Hello, young readers! Today, we’ve got you coloring pictures of one of the most exciting video game series, Kirby. Developed by the HAL Laboratory, Kirby is one of the bestselling and most popular franchises by Nintendo, known for its cute characters, bright setting, and cheerful music. We’ve got a collection of free printable Kirby coloring book, which fans of this video game series would definitely enjoy. You can check out our Kirby coloring sheets to print below.

Here’s a coloring page of Beam Kirby, the most well-known copy ability of this video game character. In fact, it’s the most favorite ability of Masahiro Sakurai, Kirby’s creator as well. This ability allows him to create a small chain of light, which can electrify the enemy in his way. However, this ability isn’t recommended for close combat as it’s a bit slow.

This coloring page shows cute Kirby in his cook form. Just like most of his abilities, even Cook allows the players to take out all the enemies on screen, but they cannot harm the undefeated mid-bosses. In this form, Kirby wears a chef hat and summons a pot in which the enemies, enemy projectile, and others are pulled in and cooked.

The cutter is one of the copy abilities of Kirby that debuted in “Kirby’s Adventures”. This form gives Kirby boomerang-like blades that appear on the cap, which players can use to attack the enemies behind without even turning around. If required, Kirby can even move the blade upwards or downwards after throwing it.

This copy ability of Kirby appeared for the first time in Kirby Super Star and is one of his most versatile abilities. It lets Kirby execute several different attacks by turning into a boxer or martial artist, anything the player wants. Besides, Fighter Kirby can also blast energy like the regular aura or chi fighters.

This coloring page features Fire Kirby, one of the first and basic Copy Abilities, which debuted in Kirby’s Adventure. The primary attack of Fire Kirby is spewing flakes to destroy the nearby enemies. Fire Kirby can even cover himself entirely in the fire to damage the enemies severely.

This coloring sheet features 6 copy abilities of Kirby- Cutter, Beam, Tornado, Needle, Hammer, Wheel and Fighter. Copy Abilities are basically powers, which Kirby gains during the game. Kirby obtains these abilities by inhaling either the enemies or their weapons and copying their powers.

This adorable Kirby coloring sheet features the different and vital characters of this video game series. These characters are cute in their own good ways, but they will look cuter when they are filled with some bright and beautiful shades. It will make them come alive.

Here’s a coloring picture of Kirby singing in the series, “Kirby: Right Back at Ya!”. Produced by Webster Inc., this series makes use of characters and concepts of the game series, instead of copying it entirely. This was one of the main reasons why this series was a huge hit with the kids.

Ice is one of the basic copy abilities of Kirby, in which he unleashes a breath of ice, which turns the enemies into ice cubes. Kirby then uses the frozen enemy to destroy other enemies or obstacles. The ice cream can explode if it’s not kicked.

This coloring sheet is taken from the series, “Kirby and the Rainbow Curse”, which was released in 2015. It’s a sequel to “Kirby: Canvas Curse”, but makes use of clay motif instead of painted art style.

Here’s a coloring page of Kirby taking a swim with the marine animals in Olive Ocean, which is basically the 6th level in “Kirby and The Amazing Mirror”. Olive Ocean is a large water body located in the mirror world, in which Kirby has to navigate through, despite all the difficulties that come along.

This Kirby coloring page features the signature technique of this adorable character- inhaling. Basically, Kirby sucks some objects in his mouth, just like a vacuum. In fact, Kirby can even swallow the enemy into his mouth and then spit it out in the shape of a star to attack.

King Dedede is the main antagonist and an archenemy of Kirby in the video game series. The self-proclaimed, greedy king of Dream Land was a major obstruction in the goals of Kirby. King Dedede appears like a penguin dressed up in fine red and yellow clothes. He even has an emblem, which is basically a picture of himself performing doing poses.

Here’s a coloring sheet of Meta Knight, one of the most significant characters appearing in the Kirby video game series. Meta Knight is the leader of the soldier army Meta Knights and also happens to be the captain of Battleship Halberd, a large airship. Meta Knight is extremely popular with the players, primarily because of his striking resemblance to Kirby.

Here’s a coloring sheet of one of the most popular series of this video game- “Kirby: Right Back at Ya”. This series revolves around the adventures of Kirby and his friend Starship as they land on the Planet Popstar in Dream Land. In this series, Kirby is the star warrior who saves the Dream Land from destruction.

Here’s a coloring sheet of Yo-Yo Kirby, in which this cutie wears a purple cap backward and uses a red and white colored yo-yo as his weapon. In this form, Kirby uses yo-yo and break-dance to attack the enemies.

This coloring sheet is a poster of Kirby’s Adventure, a game by Nintendo release way back in 1993. This second installment of the Kirby series is best known for featuring the much-acclaimed Copy Abilities of Kirby, which are now a significant part of this video game. It’s also the first series to include various sub-games.

This is one of our favorite Nintendo Kirby coloring images featuring our favorite video game character surrounded by twinkling stars. What sets this power apart is that it can also be used in water, along with Staff, Spear, Hamme, and Parasol.

The sword is one of the most iconic powers and abilities of Kirby. In this form, Kirby wields a sword and a long, green hat.

So how did you like our collection of free Kirby coloring pages printable? They look awesome, right? We bet they’ll look even better when you fill them with the colors of your choice. We’d love to know about your favorite Kirby coloring pictures. So drop us a comment below! And don’t forget to check out our FNAF coloring pages.