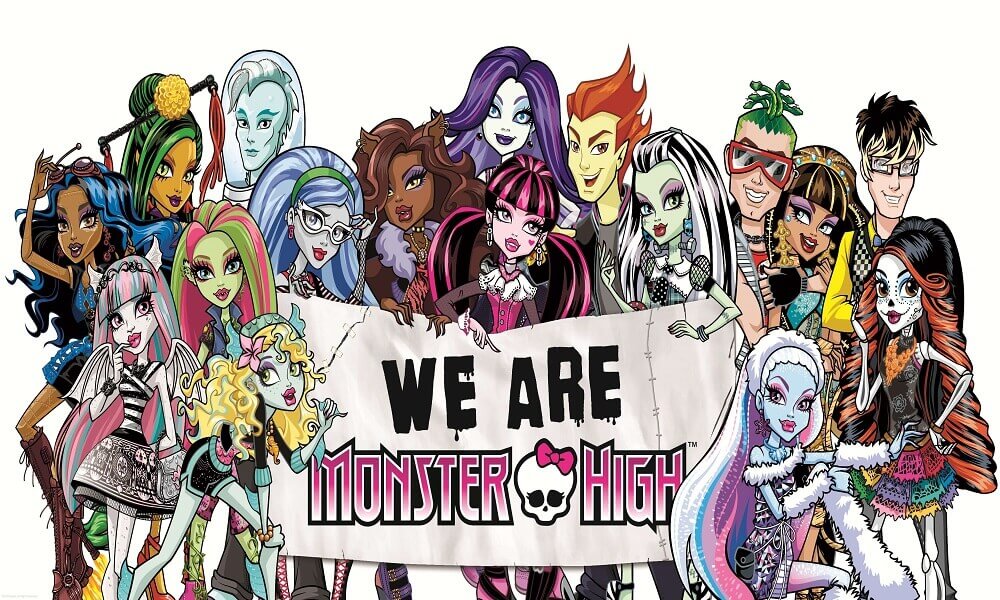 The cute and adorable character you see here is a baby from the Monster High series. The baby is looking ultra-cute and glamorous and she’ll look even more beautiful when you fill her image with the perfect colors. You can even use these coloring sheets to make cards.

This Monster High coloring page features the three Mansters from the series- Claude Wolf, Deuce Gorgon and Jackson Jekyll. We will be discussing more about these characters below. So stay tuned!

This Monster High coloring page features Operetta, the daughter of the Phantom of the Opera and an all-around character of this series. She’s both a diva and a rebel and tends to demand respect from whoever is around her.

This coloring page features two important characters from Monster High Spectra Vondergeist and Skelita Calaveras. Both these ghouls are special in their own ways and deserve the brightest and prettiest of shades. So break your crayons on this coloring page right away.

Gilda Goldstag, a Ceryneian Hind, is the treasurer of the student council of Monster High. She’s a quiet and peaceful ghoul, who loves to sit and read a book, rather than jumping around. Gilda is the daughter of Golden Hind, based on Ceryneian Hind mythology.

Jackson Jekyll, part human and part fire elemental, is an all-around character from the Monster High series. Jack is a shy and cautious child, but never gets intimidated easily. Also, Jackson is one of the best students at Monster High school.

This Monster High coloring page features Abbey Bominable, Cleo de Nile, and Robecca Steam. Now that we have told you about the characters, it’s your duty to fill the diagrams with the signature colors of these ghouls.

Meet Abbey Bominable, a student of Monster High, who is originally a yeti and an inhabitant of the Himalayan mountain range. Initially, Abbey has a tough time adjusting to a new culture, but like a winner, she turned the awkward moments into humorous ones.

Bonita Femur a hybrid monster introduced in 2014, is the child of a moth and skeleton, which explains her bright pink wings. This peculiar heritage hasn’t been too easy for her, as she found it difficult to fit anywhere due to her duality.

Meet Boo Lu Cerone, a skilled drummer and the founder of LemonAID warriors. Boo is a strong and determined young woman who hates when people complain without doing anything to help themselves. She also loves to play the keyboard and sing.

This coloring sheet features the most popular Monster High character, Clawdeen Wolf. A werewolf who loves wearing bright-colored outfits, Clawdeen is a talented fashion designer with worthy connections and an impressive portfolio. We love how energetic, confident, and fierce Clawdeen is.

Cleo De Nile is one of the most intriguing characters of Monster High as she’s a mummy, but was born human. A royalty from birth, Cleo is the queen of the student body, which she’s very protective of. Her confidence is as solid as the jewelry she wears.

Deuce Gorgon is the son of Medusa the Gorgon. He doesn’t share the best relationship with his mother but tries his best to keep it out of his school life. Deuce is considered the hottest, most relaxed, and reliable people to hang out with in the school.

As the name suggests, Draculaura is Dracula’s adopted daughter and a student of Monster High. Draculaura was very pampered when she was a child, which is why she finds it hard to deal with obstacles and cries whenever she is faced with a difficult situation.

Here’s a coloring page of Frankie Stein from Monster High, the daughter of Mr. and Mrs. Frankenstein. Frankie is a simulacrum, with the body made up of several different parts. She has white hair with black streaks and mint-green skin. She’s a sweet, but clumsy ghoul, who is always kind to others.

The ghouls of Monster High are all set to attend the coolest Ghouls Night. They have decked themselves up in the coolest of clothes and brightest of makeup. They have major plans for the night, which include playing games and dancing till the feet hurt.

Ghoulia Yelps, a smart and intelligent ghoul and the personal assistant of Cleo de Nile is the daughter of the zombies. The only problem with Ghoulia is that she can speak only the zombie language, which consists of groans and moan.

The cute ghoul you see here is Gigi Grant, a genie who spent most of her life stuck in the lantern with the hopes of being found by someone. But now, Gigi is free to experience the beauty of real-world and she’s trying to get used to the new environment in the best way possible.

This is an absolutely amazing Monster High coloring sheet featuring Headless Headmistress Bloodgood, better known as Nora Bloodgood. As her name suggests, Bloodgood is the headmistress of Monster High. She joined the school two centuries after quitting her job as a librarian.

Here’s a Monster High coloring page of Holt Hyde, the alter ego of Jackson Jekyll. Holt is a mixture Hyde-condition and fire elemental, which makes him even more enthusiastic to shirk his responsibilities and break the rules. However, he does not get along really well with Jackson Jekyll.

Lagoona Blue, a student of Monster High is the daughter of Gill-Man and a sea nymph, which explains her name. Since Lagoona Blue is from “Down Under”, she can easily talk to marine animals of all kinds. And her Australian accent suggests that she’s somewhere from this coastal region.

Nefera de Nile is a Monster High alumni and the sister of Cleo, with whom she doesn’t share a very pleasant relationship. Nefera is supposed to inherit the de Nile throne and she’s well aware of that, which is why she’s very arrogant and thinks highly of herself.

Here’s a coloring page of Robecca Steam, daughter of Hexicia Steam a mad scientist of his time and a student of Monster High. As a stuntwoman, Robecca Steam can impress anyone. However, she has a strong aversion against modern devices.

Venus McFlystrap, a plant monster is the head of the Environmental Club in Monster High. Since Venus is an ecology driver ghoul, she is loved by everyone in school but has now got a bad reputation due to her mind-controlling abilities.

Skelita Calaveras, born and raised in Campasuchill is a skeleton and student of Monster High. She’s a family-oriented woman, who can draw inspiration from anywhere and everywhere when she wants to be creative. She is even the official guardian of the cemeteries now.

Spectra Vondergeist, a student of Monster High, is the editor of the Gory Gazette blog, a famous gossip blog of the school. She’s the most mysterious of all the characters and no one knows anything about her past.