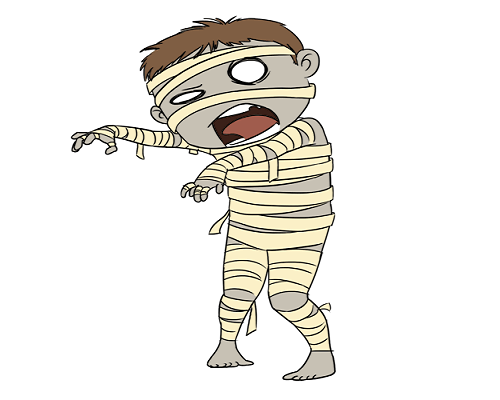 Today we’ve got our readers the coloring pictures of the most exciting historic creations- Mummy coloring pages printable. The ancient citizens of Egyptian Civilization are famously known for creating mummies by preserving the dead bodies of people and removing all their internal organs. But in the modern world, mummies are seen either as a horror artifact or an exciting souvenir from the past.

Now that Halloween is coming closer, there’s no doubt that mummies are going to be back into the highlight! You too must go with the trend and make sure you miss out on nothing. Today, you have got a chance to not only study the mummies in greater detail but also interact with them using your excellent coloring skills! Are you ready to face the mummies? If yes, then let’s filling these Mummy coloring sheets to print. We’ve also got you Halloween Mummy coloring pages printable. So stay tuned:

Meet Tim… the Mummy! He is just a little boy but still a mummy! Doesn’t he look cute all wrapped up? Well, I think that’s just a perfect costume for Halloween. Color Tim so that he looks scary and make sure he is presentable on Hallowe’en!

Look at this adorable dog in a mummy outfit! It’s surprising how he looks adorable while he’s still a mummy! Add some shades to this dog mummy using your expert coloring skills and make it looks phenomenal!

Here’s an image of a cat mummy. The cat mummy appears to be searching for something to eat, after all, it’s so hungry being in a coffin for centuries! Color this setting to perfection so that the cat mummy has an easier way of finding food.

Mummies are believed to have originated by the Egyptians. Many explorers have gone to various scary and shaky locations to discover mummies. Here are two more explorers in search of a mummy, and it appears they have found it. Make sure you add the right colors so that the explorers successfully study the mummy.

Look at this mummy who has just darted out from a pyramid. Well, people are in danger! Color the mummy neatly so that people can distinguish it and save their lives!

Oh, doesn’t that coffin door look just frightening? But the mummy inside looks so cute! How ironic. Make this Egyptian Mummy look cuter by adding some hues! Make sure that the coffin and other artifacts are golden in color and the mummy’s wrap is off-white to make the image look realistic.

Here’s an image of an Egyptian mummy wandering about in the night – when the people are off to bed and no one gets shocked. Make the night wonderful for the mummy, by coloring the setting with vibrant colors.

Doesn’t this mummy look wits-taking! I’m already shivering! Apparently, it has figured out how to come out of its coffin! Dangerous as it already is, adds some shades to it so that it looks evermore frightening!

Imagine looking behind and facing into the eyes of a mummy! Unfortunately, that’s what will happen to this guy when he turns around and finds who’s saying, “Peekaboo!” I’m already getting goosebumps!

Here is a funny mummy image. Can you spot the plaster on the mummy’s finger? I wonder how a mummy can get hurt! After all, it has no skin! Funny as it is, color it, paste it on your door and show people your amazing sense of humor!

Hallowe’ens are incomplete without mummies; after all, they are some of the most frightening things! This Halloween, frighten people seamlessly using this printable Halloween mummy!

Here is a Hallowe’en Mummy with his best friend – the spider – because apparently, spiders are the only living things lurking about coffins! Color the best friends with grace and highlight their bond!

Whenever there’s a special event, there has to be Hello Kitty. Now that we have Hallowe’en, Hello Kitty is ready once again to take the stage all to herself! Here’s a Hello Kitty poster for Hallowe’en. Apparently, the Kitty is ready to scare people off their guts using the Mummy costume. Color this poster astoundingly and have a happy Hallowe’en!

Talking of mummies, one can never forget the spooky yet humorous character of Murray from Hotel Transylvania, apparently a mummy with powers to beckon a sandstorm and cast Egyptian curses! Color Murray to perfection!

King Tut – or Tutankhamun – was an ancient Egyptian ruler who becomes very famous because explorers discovered a tomb with his face. Here’s a mummy with the face of King Tut. Make sure it is exactly the right color and its historic ideal.

Mad Scientist and Mummy are the two things that the world does not need. And here they are together, ready to cause some trouble! Fuel its malicious actions by coloring the Mad Scientist Mummy with dark and spooky colors.

Here’s Disney’s legendary character – the Mickey Mouse – all set for Hallowe’en geared up as a Mummy! I really like the pumpkin he’s carrying around with himself. It will surely help in collecting chocolates! Make him look spookier using your expert coloring skills so that Mickey can get more chocolates this Hallowe’en!

Here is a coloring page depicting the process of mummification – the method by which dead bodies are converted into mummies for preserving. Share your love for mummies by pasting this page (after coloring it) on your cupboard!

Oh, look! It appears that Mr. Spooky-Mummy has stumbled into a maze. Can you find the way out for the mummy? It’s surely a challenge! Help the mummy in figuring its way towards its home – the pyramid.

Whoa! Look who’s woken up from a long time’s nap! It’s a mummy stumbling right out of its coffin! Not many people get to see this sight! Here’s your chance to make this memorable. All you have to do is print and color this page and tell the world you saw a mummy waking from its coffin!

If you think you are really good are coloring and painting, here’s a challenging image for you. Let’s see how well you can use your talent to make this mummy sketch look realistic. If you think you’re ready for the challenge, print the image, color it up, and post it back into the comments section below. Let’s see your nerve!

Here is an image with a single-eyed, tri-horned, sketchy-looking alien, but it’s also a mummy! What a disastrous combination! A cruel, cold-blooded alien and a dusty, spooky, chilly mummy! The alien-mummy looks like it has some malevolent intent. Don’t let the nasty alien-mummy trouble our earth! Use your crayons and protect us all!

SpongeBob is one of my favorite cartoon characters, because of his attitude and because of his dressing sense. Unfortunately, SpongeBob is dressed differently here, which makes me feel hurt. Well, you can ensure that the SpongeBob looks great even in this new mummy outfit by coloring him using your best and most vibrant colors! Make sure that you color the SquarePants blue and the wrapping bandage yellow as a sponge. It’s time you create your own great cartoon character!

Alright, expert artists, that’s it for today. Hope you loved our mummy coloring pictures to print and colored all of them with ease and grace.

In case you want to share which was your favorite Mummy coloring images printable, which image you colored the best, any suggestions, any feelings, or anything else you want the world to know, please feel free to put it down in the comments section right below!