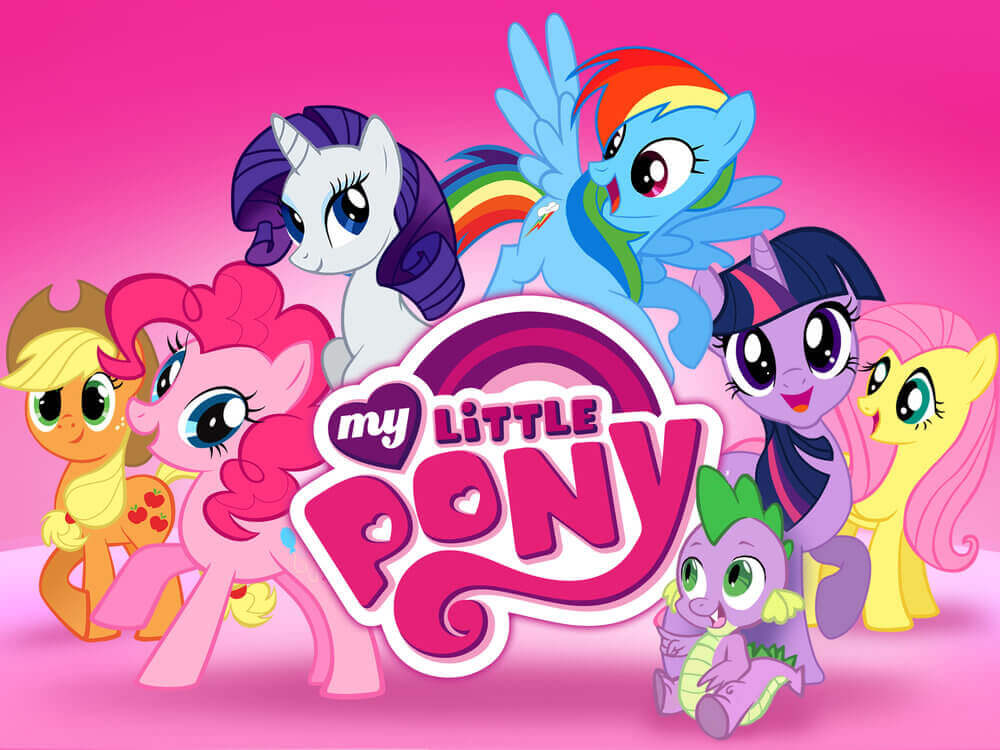 We all are well acquainted with Hasbro’s fantasy animated series ‘My Little Pony Friendship Is Magic’ and its immense popularity among children! There is no such child out there who would deny coloring these beautiful characters from the series. The show revolves around the life of an Alicorn pony, Twilight Sparkle. She spreads the magic of friendship in the town of Ponyville, as instructed by her mentor as well as the co-ruler of the magical land Equestria, Princess Celestia. Together with the efforts of other ponies of Ponyville, Twilight Sparkle succeeds in spreading the magic of friendship and in turn is cherished by the other ponies of town! Here we present the top 40 free printable My Little Pony coloring pages for our dear friends! Check them out below.

Twilight Sparkle, one of the main characters of the series is a female unicorn pony who transforms into an Alicorn. She regularly sends friendship reports to Queen Celestia and represents the element of magic. With her smartness and leadership qualities, she succeeds in spreading the magic of friendship in the entire Ponyville! She is violet in color with dark violet eyes and black hair. The crown on her head increases her beauty manifolds.

Fluttershy is a female Pegasus pony who is kind and gentle to all! She represents the element of kindness. She takes good care of animals and provides them with food and shelter, the most important being bunny, Angel! Fluttershy is yellow in appearance with dark green eyes and pink hair.

Applejack is a female earth pony who works at the Sweet Apple Acres. Always ready to lend a helping hand to a friend in trouble, Applejack is sweet, caring, and honest, hence representing the element of honesty! She is light brown in color with light green eyes and has a mix of blonde/cream hair.

Rainbow Dash is a female Pegasus pony responsible for maintaining the weather and clearing the skies in Ponyville. She is a reliable friend and turns no stone unturned in helping out her friends! Due to these qualities, she represents the element of loyalty! She has a light blue body, pink eyes with rainbow-colored hair.

Rarity, a female unicorn pony, is generous at heart and has a perfect sense of fashion. She owns a boutique named Carousel. She is also believed to be Spike’s long-term crush. Her element of representation is generosity. Rarity has a white color body, blue eyes, and dark violet hair.

Pinkamena Diana Pie Aka Pinkie Pie is the most entertaining pony of the town! She brings joy and laughter into the lives of her friends. Pinkie Pie cherishes each day of her life as well as everyone around her and hence represents the element of laughter! She is light pink in appearance with light blue eyes, which complements her bright pink hair.

Being one of the rulers of Equestria, Princess Celestia is responsible for raising the sun and the moon. She is Twilight Sparkle’s mentor and guide. She is a beautiful Alicorn pony, with a white coat and light-greyish magenta eyes. She also possesses sun-based cutie marks.

Princess Luna is the co-ruler of Equestria. She later transforms into Nightmare Moon, who threatens to create an eternal night in Ponyville. Fortunately, she continues ruling again after the elements of harmony cleanse her from the evil trap!

Princess Mi Amore Cadenza aka Princess Cadence is an Alicorn pony and one of the secondary characters of the series. She marries Shining Armor and has a son with him named Flurry Heart. Along with Shining Armor, she rules the Crystal Empire. She is also believed to be born as a Pegasus pony!

Spike, the purple-green baby dragon, is one of the main characters of the series. He came into existence after Twilight hatched him out of an egg as a part of a pre-admission test. Impressed by her magical abilities, Princess Equestria appoints him as Twilight’s assistant. He plays a significant role in communicating between Twilight Sparkle and Princess Equestria.

Scootaloo is a female, school-going Pegasus pony! She is great at scooter driving, hence the name ‘Scootaloo’. She is a member of the secret society ‘Cutie Marks Crusaders’, which helps ponies gain their cutie marks!

Sweetie Belle is a school student and a unicorn pony. Being Rarity’s younger sister, she is not even close to her in terms of temperament. In spite of these personality clashes, they both love each other unconditionally. She is one of the members of the ‘Cutie Marks Crusaders’ along with her friends, Apple Bloom and Sweetie Belle!

Apple Bloom is a school-age yellow earth pony. She is Applejack’s younger sister and also one of the founders of the secret society ‘Cutie Marks Crusaders’. She has a heavy southern accent and is skilled at martial arts, carpentry, and design.

Babs Seed, a school-going earth pony, is Apple Bloom’s cousin from Manehattan and heads its branch of ‘Cutie Marks Crusaders’. She has a cutie mark, which appears as a pair of scissors with apple-shaped handles.

Prince Blueblood, a royal male unicorn pony, is a distant nephew of Princess Celestia and Princess Luna. Initially, he objected to Rarity’s affections. Later on, after learning how self-centered and a pompous fool he is, Rarity loses feelings for him.

Shining Armor, the male unicorn pony is Twilight’s elder brother. He is given the title of the prince after marrying Princess Cadence. He is caring, warm, gentle, and protective of his wife. He has a strong affinity for his sister. He served as the Captain of Canterlot Royal Guard before co-ruling the Crystal Empire. Shining Armor is bright-white and royal blue in color.

Flurry heart is a newborn Alicorn pony. She is the daughter of Princess Cadence and Shining Armor. Being an Alicorn, she is naturally blessed with powerful magical skills, which make her stand out of the unicorns in town. Initially, her magical powers would cause instability in the Crystal Empire, but after the Crystallizing ceremony, her magical abilities are much more controlled and increased!

Princess Ember is a female dragon and one of the supporting characters of the series. She is the Dragon Lord of the Dragon Land succeeding her father, Torch. She is blue-green in appearance with brilliant red eyes!

Thorax is a male Changeling, leading the Changeling group of his kingdom. He has a motto of learning friendship and spreading it all across the Changeling Kingdom for free! He is friends with the other good ponies of the town.

Granny Smith is an elderly earth pony of the Apple family. She is Apple Bloom, Applejack, and Big Macintosh’s paternal grandmother. Due to her old age, she barely remembers anything properly. She is believed to be one of the preliminary settlers of Ponyville!

Big Macintosh is a red stallion earth pony, belonging to the Apple family. He is hardworking and gentle and rarely speaks. He was the victim of the Cutie Marks Crusader’s magic spell which deliberately made him fall in love with Cheerilee.

Cheerilee is a purple-pink, female earth pony and one of the supporting characters of the series. She teaches at the Ponyville Schoolhouse.

Derpy, also known as Muffins and Ditzy Doo, is a female Pegasus pony. She was given the name Derpy Hooves due to her cross-eyed ‘derpy’ expression. She is light sapphire in appearance with a pale mane and light grayish eyes.

Diamond Tiara is a young earth pony and a classmate of Silver Spoon. She is taught by her mother to be rude, selfish, and self-centered. She acts according to her mother’s teachings, but deep inside, she has a soft and generous side which gets revealed, when she chooses to be a good pony and spreads the magic of friendship in the entire Ponyville.

Goldie Delicious is a female earth pony, with an amber coat and very light green eyes. She lives in a cabin that isn’t far from Ponyville. She is Granny Smith’s cousin and loves to collect items and heirlooms. She is also a cat lover!

Princess Luna co-ruled Equestria with her beloved elder sister Princess Celestia. The elder one was responsible for raising the sun, whereas the younger one was in charge of raising the moon! Unfortunately, Princess Luna falls prey to the dark forces. She is transformed into a mare full of jealousy and bitterness towards her sister. The coloring page depicts her transformed avatar!

Lotus Blossom is a female earth pony. She is one of the spa ponies in town. She gives different types of treatments to ponies to enhance their beauty and make them feel rejuvenated!

Maudalina Daisy Pie aka Maud Pie is a female earth pony. She is Pinki Pie’s not-so-social older sister and a doctor by profession. She has a rock cut into a diamond-shaped cutie mark. Let’s fill her dull life with colors!

Aloe is one of the spa ponies of Ponyville. She is a female earth pony. Aloe is first featured in the episode of Bridle Gossip. She beautifies the ponies of town. She looks beautiful with her pink coat and blue mane!

Queen Chrysalis is a changeling and one of the antagonists of the series. She is the ruler of the changeling kingdom. She highly misuses her shapeshifting abilities to reign over Equestria! However, karma turns up, and she is dethroned from all her position.

King Sombra, the umbral male unicorn, is one of the main antagonists of the series. He ruled the Crystal Empire about a thousand years ago, but was banished into the frozen north! He tries to take over the empire again after his return from exile.

Shoeshine, a female earth pony, is one of the background ponies of the show. She has a light blue coat, periwinkle mane, and stunning eyes. She also has an interlocking silver-gold horseshoe cutie mark!

Silver Spoon is a female school-going earth pony. She is Diamond Tiara’s best friend and a minor antagonist in the show. She is born with a silver spoon in her mouth! Hence, both her name as well as cutie mark depicts her privileged life.

Spitfire is a female Pegasus pony. She is someone with a fierce temper, hence the name, Spitfire! She is the captain of the aerial acrobatics group, Wonderbolts. She has a brilliant gold coat with light amber streaks and intense eyes.

Starlight Glimmer, a female unicorn pony is a former antagonist. She is one of the secondary characters of the series. She has a pale purple coat, moderate purple mane, and Persian blue eyes.

Here’s one of our cutest My Little Pony coloring pages featuring Tealove. Tealove is a female earth pony, with a lime green coat, cerulean mane, and pinkish eyes. She is the owner of Tea love’s tearoom.

Twist is a female, school-going earth pony. She has some speech impairments which are noticeable when she speaks. She is a student at Cheerilee’s schoolhouse. She was called a blank flank until she acquired her cutie marks in heart-shaped candy canes.

Zecora is a female zebra who stays in a nearby forest named Everfree. She was an evil enchanter, but later on, she comes to good terms with the ponies and helps them with her knowledge about magical ailments.

Lord Tirek is a male centaur and one of the main antagonists of the series. He has a giant body with horns and forcibly wants to take over Equestria. However, he is defeated by the Mane Six and sent back to Tartarus from where he is believed to originate from.

Here we present a picture of the Mane six characters from the series. They teach us to remain united, no matter what the cause, united we stand, and divided we fall!

This was our compilation of My Little Pony coloring pages. We hope your child enjoyed coloring the different ponies residing in a magical world! If you liked our post, please let us know, as it encourages us to bring more such entertaining articles for you!