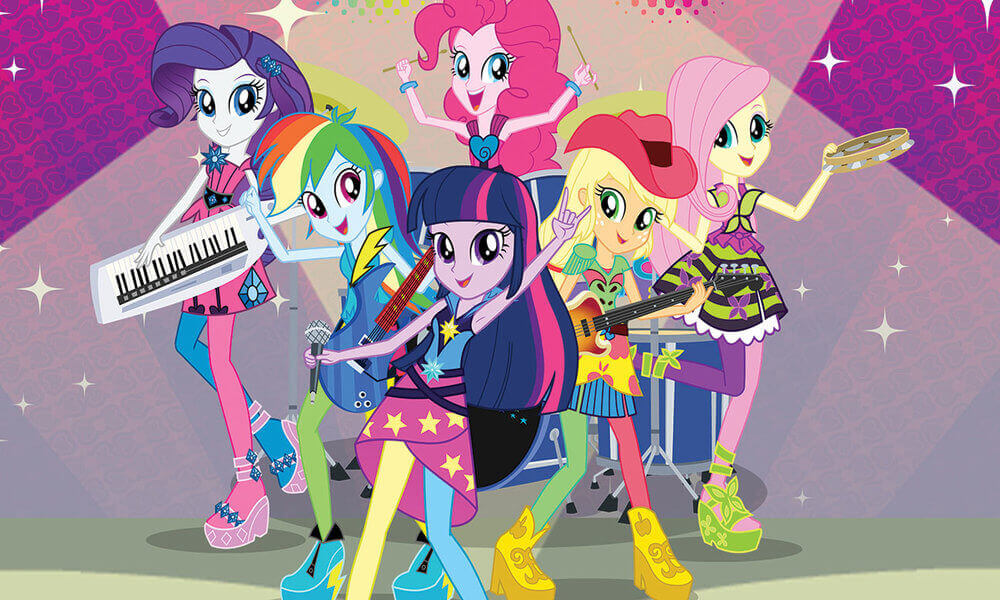 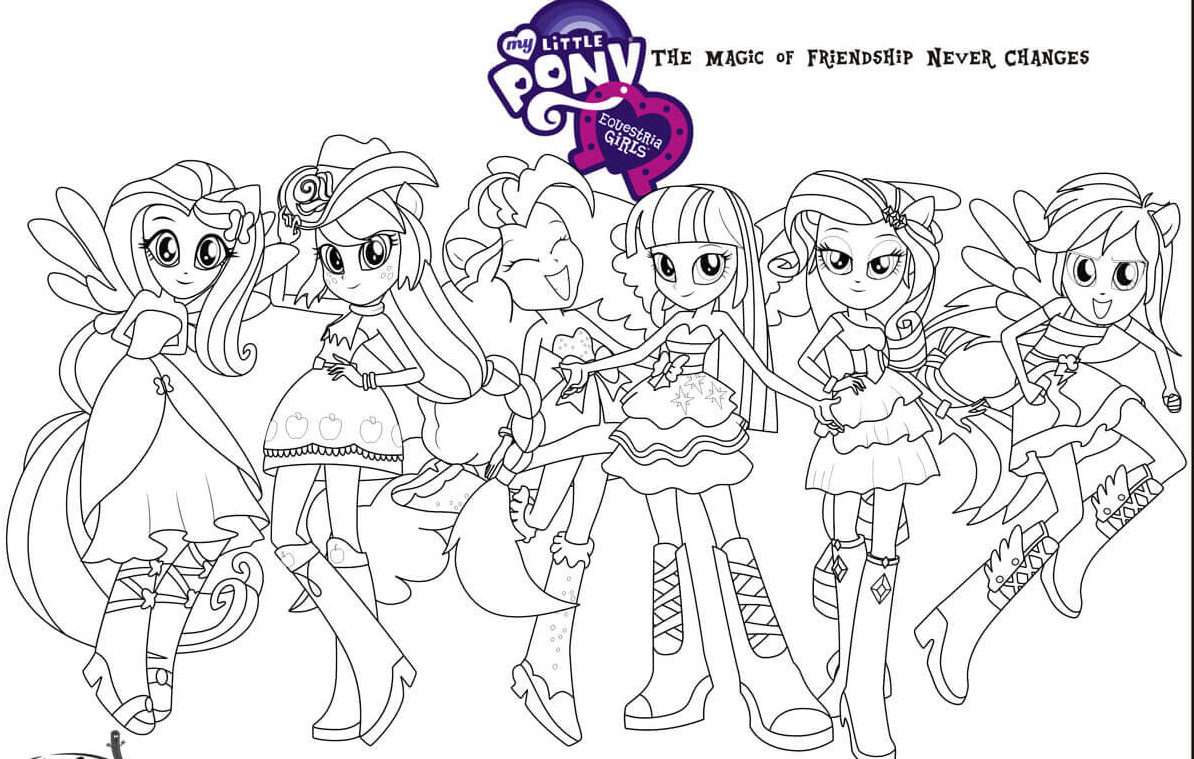 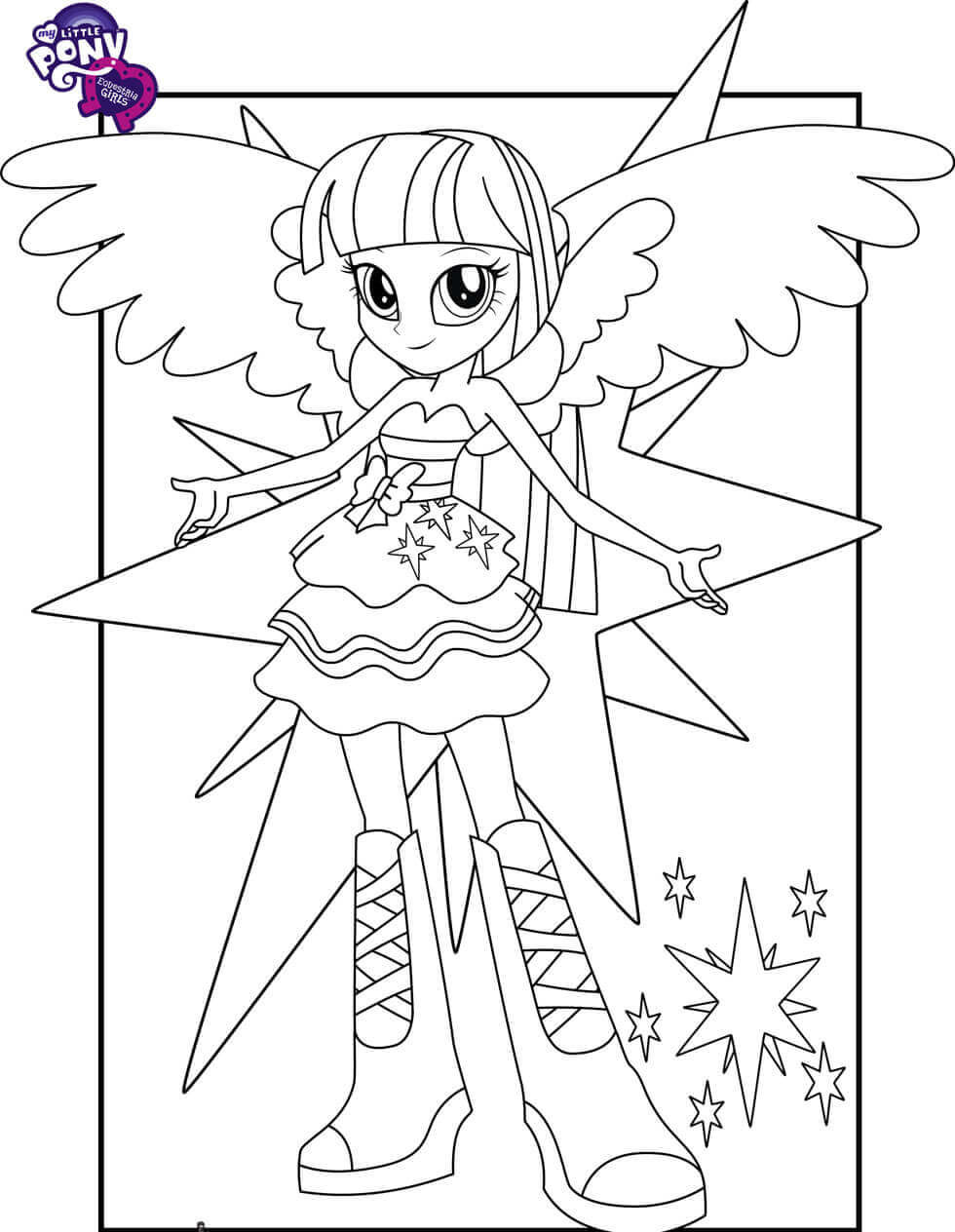 Twilight Sparkle, fondly known as Sci-Twi is one of the main characters of MLP Equestria Girls. In fact, the entire series revolves around her. This intelligent and well-spoken girl holds a massive interest in science. She’s even a bit of a wallflower, acting awkward around others. Twilight Sparkle’s dressing is a bit different from the other Equestria Girls. She appears in a simple pink and purple dress, her hair is tied in a ponytail, and she wears thick, black glasses. 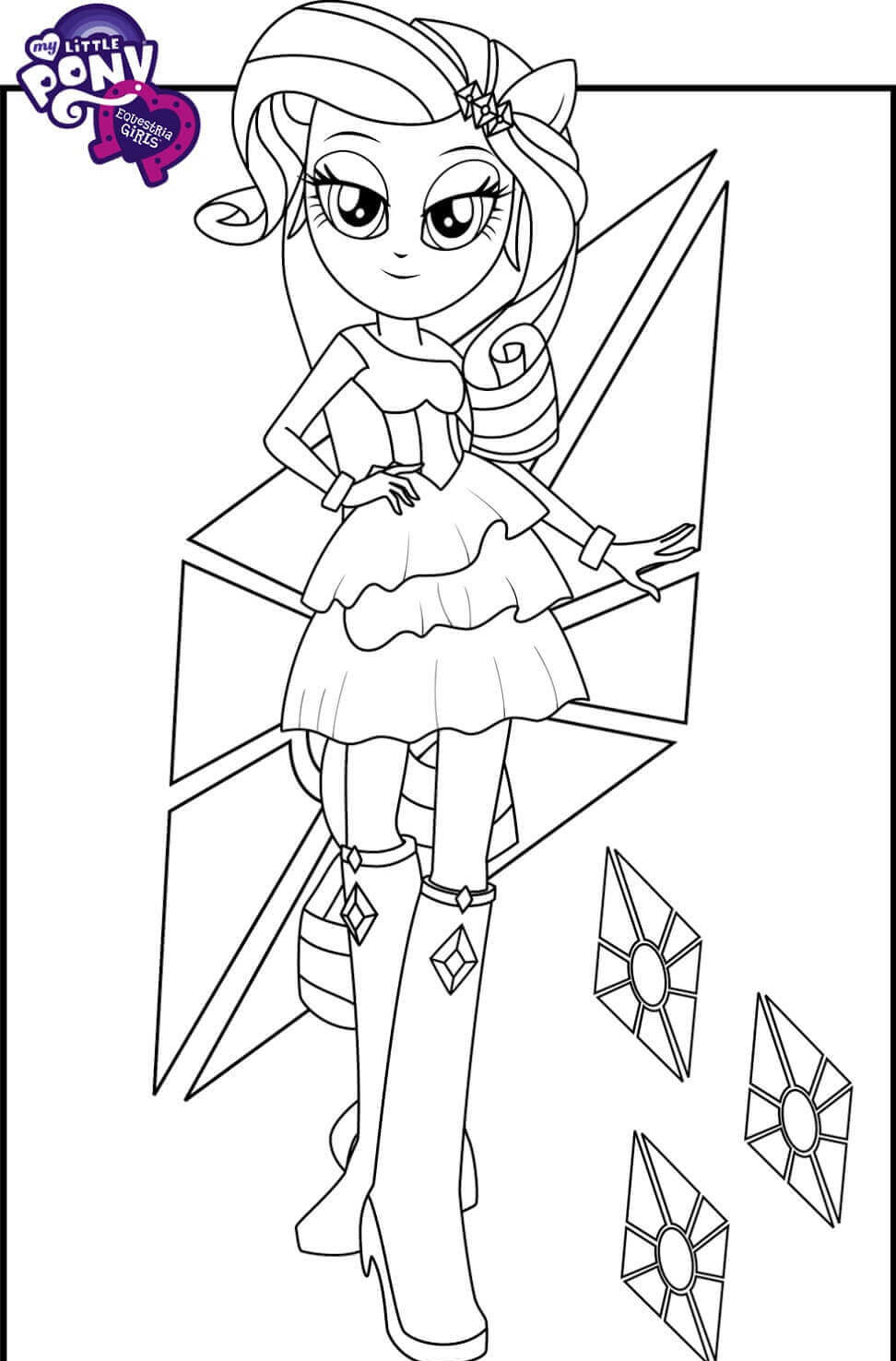 Meet Rarity, the student of Canterlot High School and one of the primary characters of “My Little Pony Equestria Girls”. Representing the element of generosity, Rarity appears for the first time when Sunset Shimmer tries to ruin Twilight Sparkle’s image with an online smear video. She was the one who helped Twilight get a disguise to escape the embarrassment. 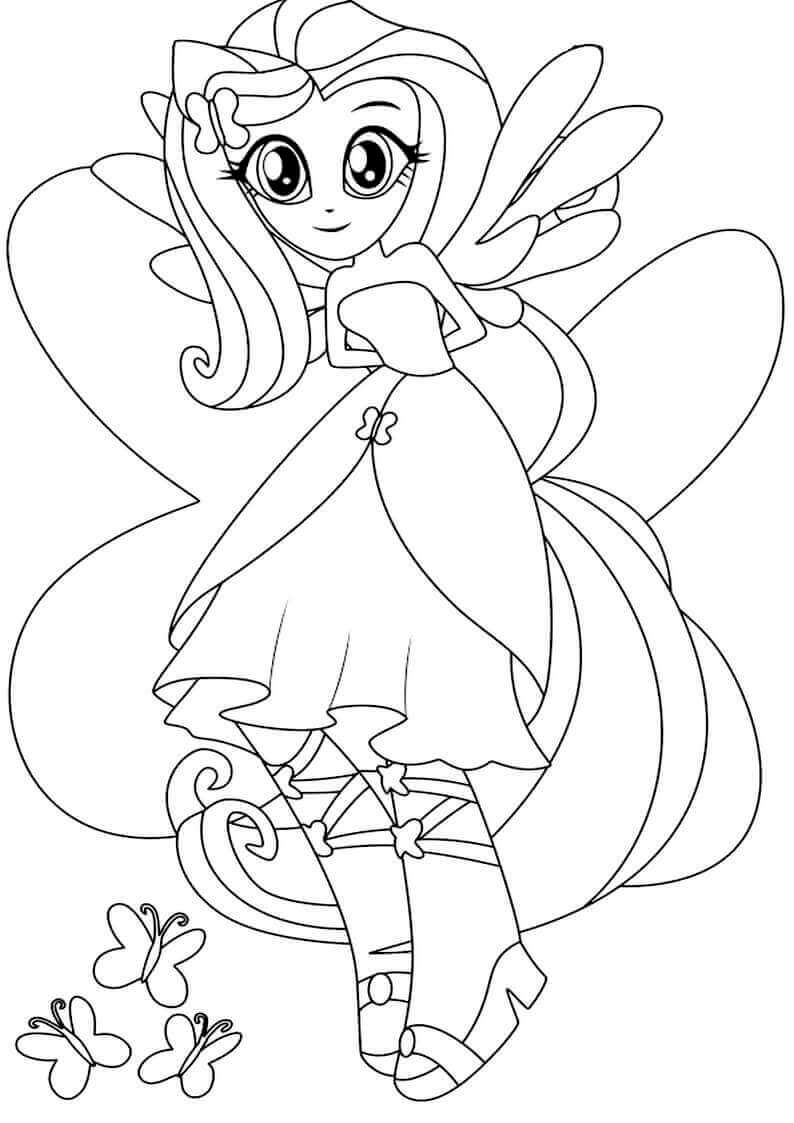 Fluttershy, one of the primary characters of this series represents the element of kindness. This loving girl is always ready to help a friend in need, especially if it’s an animal. Fluttershy can go to any extend to help her friends and always puts others before her, as seen when she stood up to help Twilight Sparkle, who was a stranger to her then. 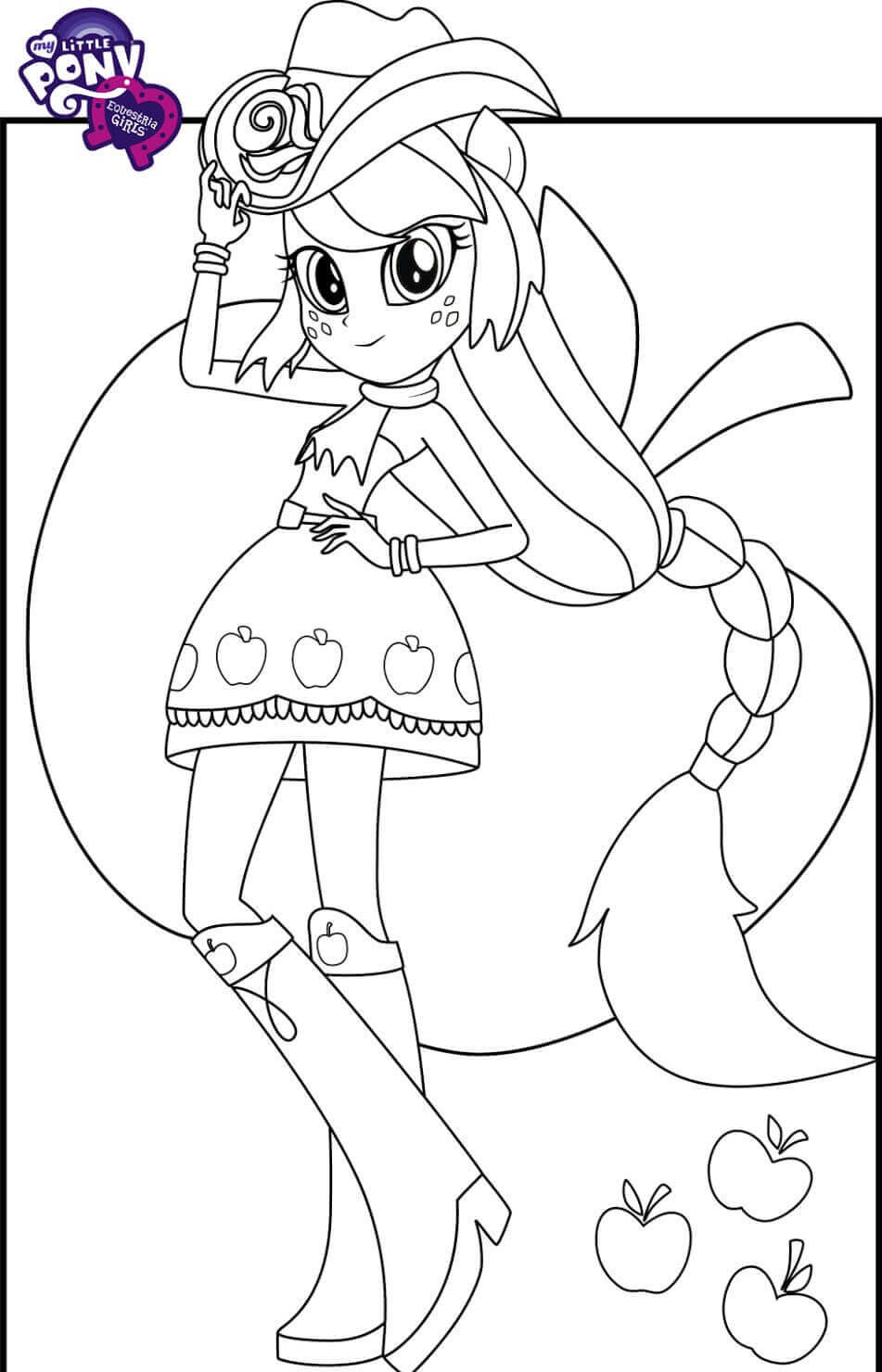 Applejack, representing the element of honesty, is a hardworking and reliable girl particularly fond of cooking. While all the other girls in the school act quirky, Applejack prefers being straight and to the point. She’s also stronger than most of the girls in school, seen when she carried a folding table herself, which is generally lifted by two male athletes. 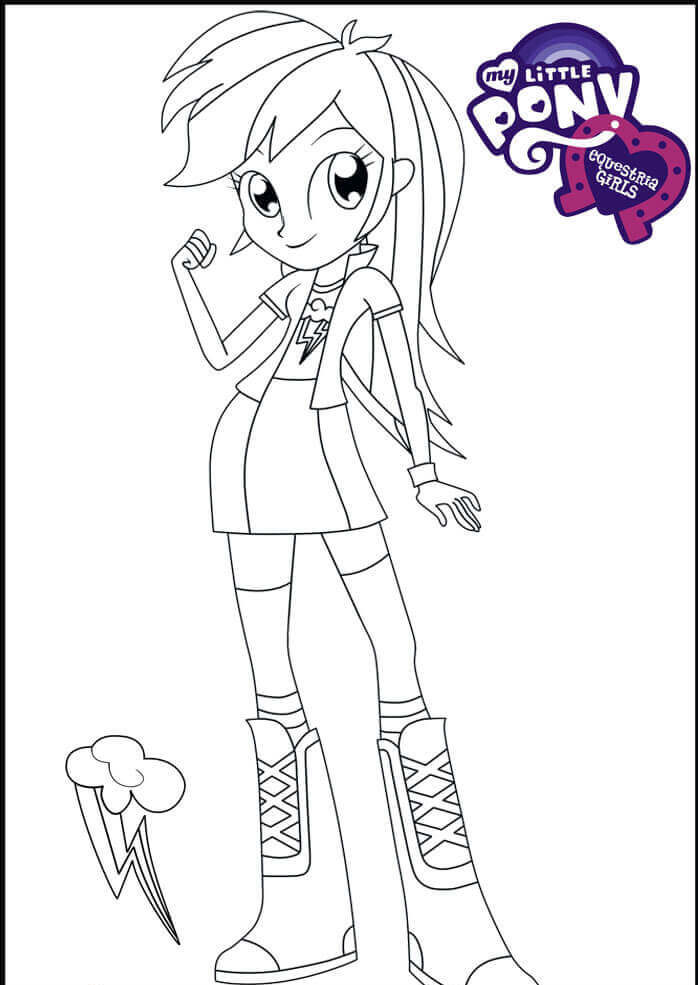 Meet Rainbow Dash, a supporting character from “My Little Pony Equestria Girls” representing the element of loyalty. This competitive and athletic student is the captain of every sports team in her school. Her strongest trait is, but of course, loyalty. She even motivates her friends as much as she can. However, Rainbow Dash can be a bit self-centered at times and may even harp about her own awesomeness. 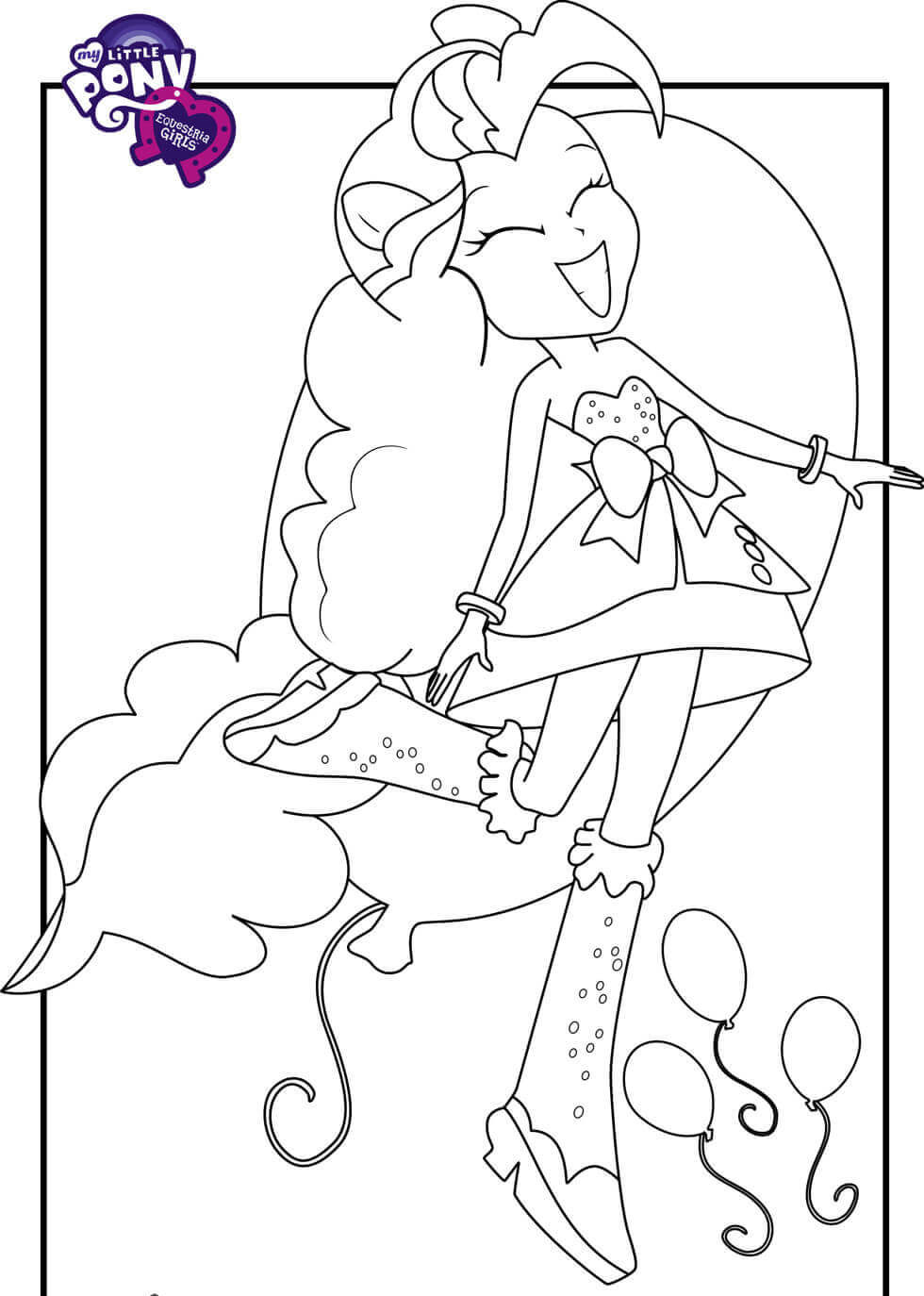 The beautiful Equestria Girl you see here is Pinkie Pie, a student of the Canterlot High School, representing the element of laughter. This free-spirited teenager has a heart as big as her laugh. Her vibrant energy and of course, her jokes add color to the Rainbooms. Pinkie Pie tends to stock her refrigerator with cans of whipped cream, skip instead of walking properly, and pop out of random places. 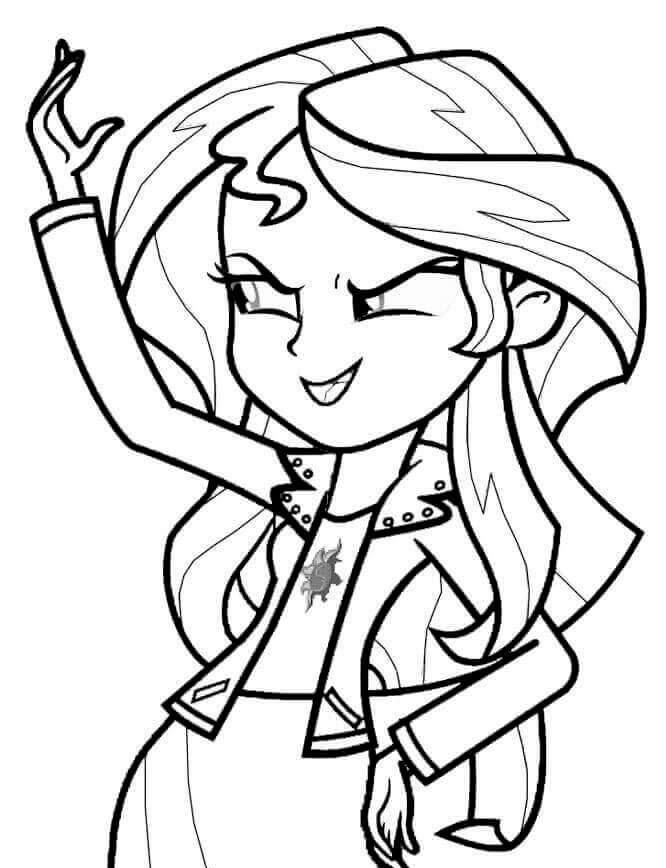 Meet Sunset Shimmer, the villain who turns into the protagonist in “My Little Pony Equestria Girls”. In the first film, Sunset Shimmer was portrayed as a manipulative, condescending, and self-absorbed girl who loved insulting and belittling others. But in the second movie, she discards her old self and starts believing in friends. She even befriends her former enemies. 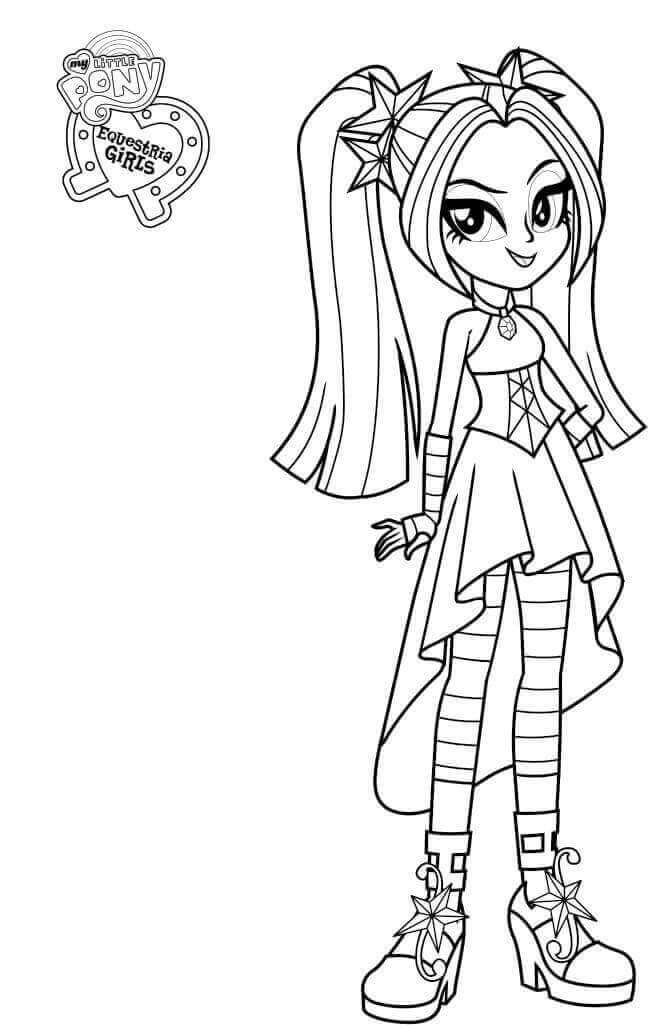 Aria Blaze, a siren of Canterlot High School, is one of the antagonists of the series. She’s a manipulative and cold teenager, who wants to remove Rainbooms from the singing competition. The highlight of her appearance is fin-like, non-feathered, and translucent wings. 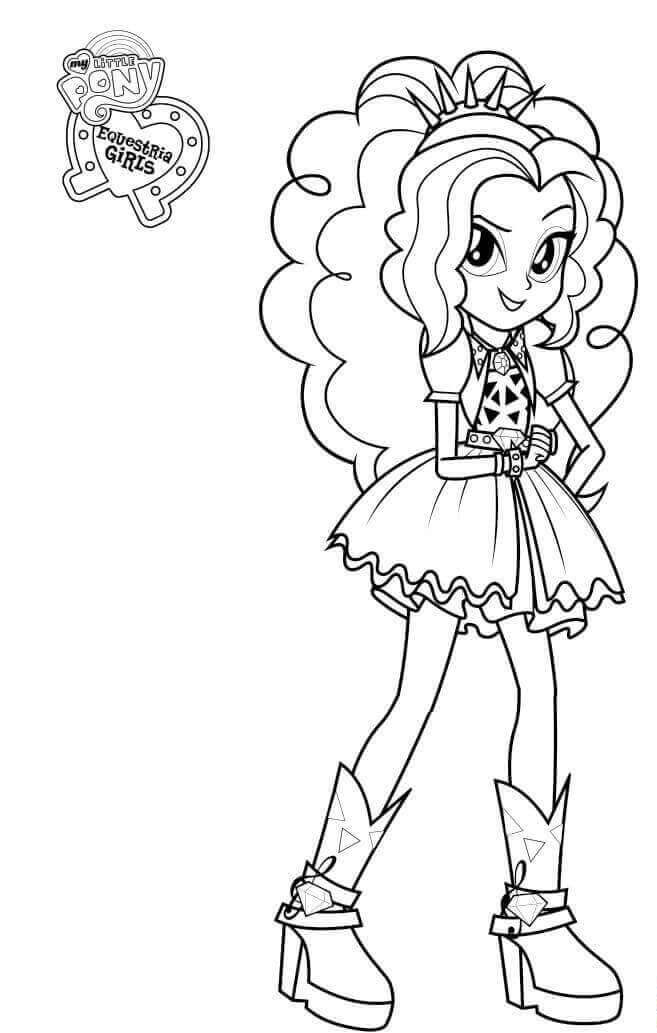 Meet Adagio Dazzle, the main antagonist of “My Little Pony Equestria Girls: Rainbow Rocks” movie. This scheming and manipulative girl sways the students using her magic trick. She’s even sadistic, as seen in her taking advantage of Sunset Shimmer’s problems and insecurities. 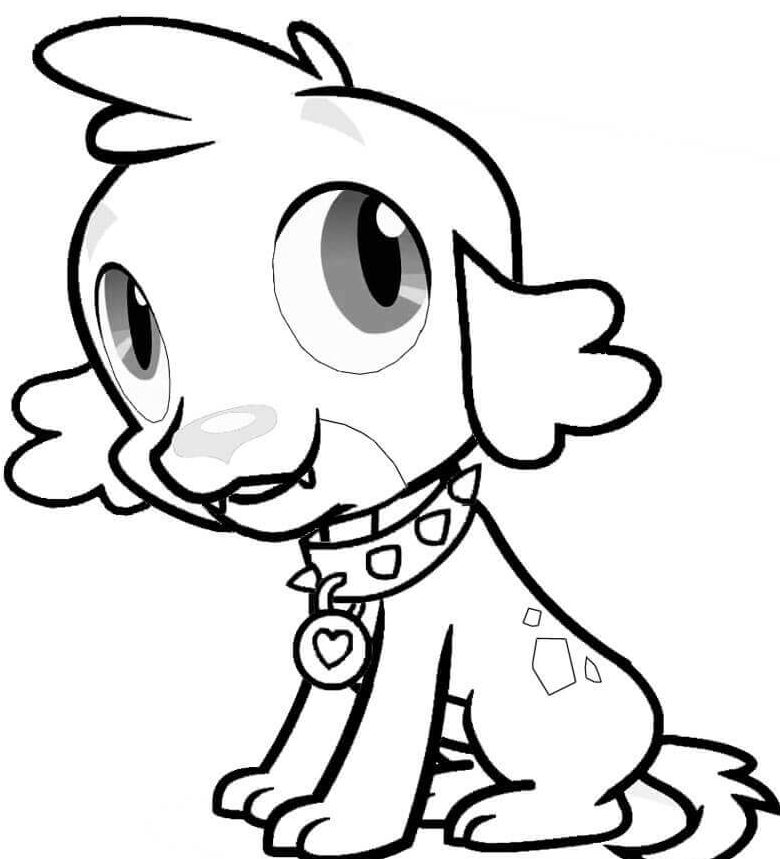 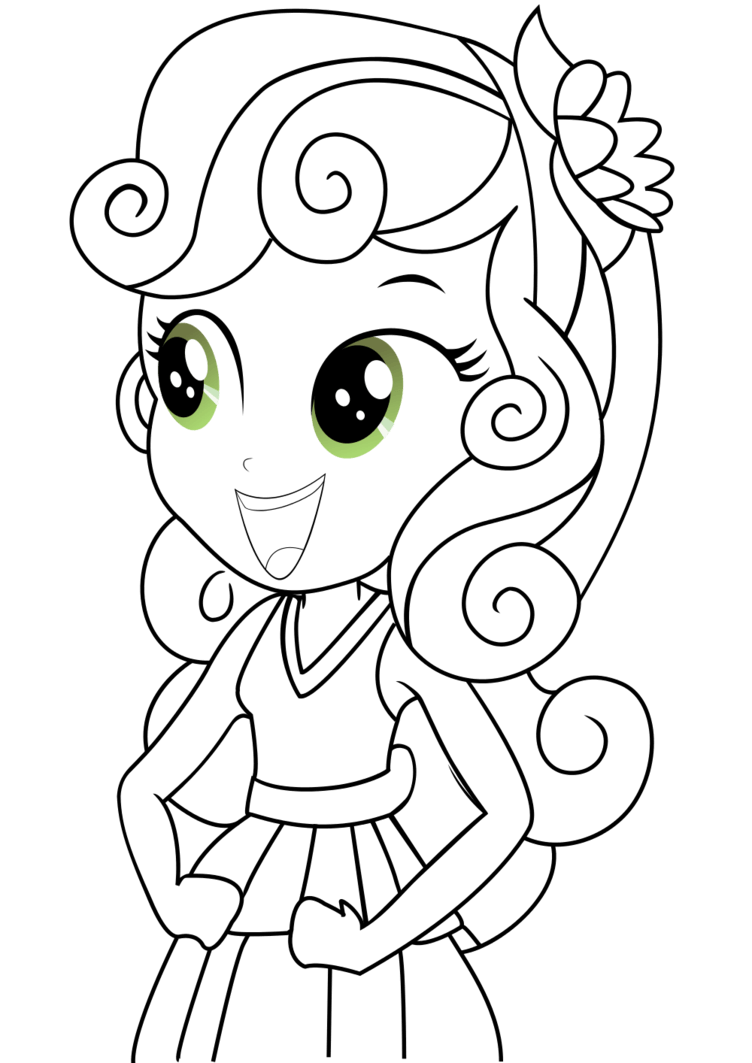 Here’s a rare coloring page of Sweetie Belle, a recently introduced character in Equestria Girls. Sweetie Belle is a helpful, kindhearted, and innocent girl, completely true to her name. Yes, she can be naïve, mischievous and impetuous sometimes, but is always well-meaning and positive in times of crisis.

This coloring page features two of the most talented Equestria Girls. Rarity And Pinkie Pie are the closest friends in Canterlot High School despite Sunset Shimmer’s efforts to break them apart. They are paired together several times in the series, for instance, in the Emerald Tent at Camp Everfree and during the speed skating contest in Tri-Cross Relay. 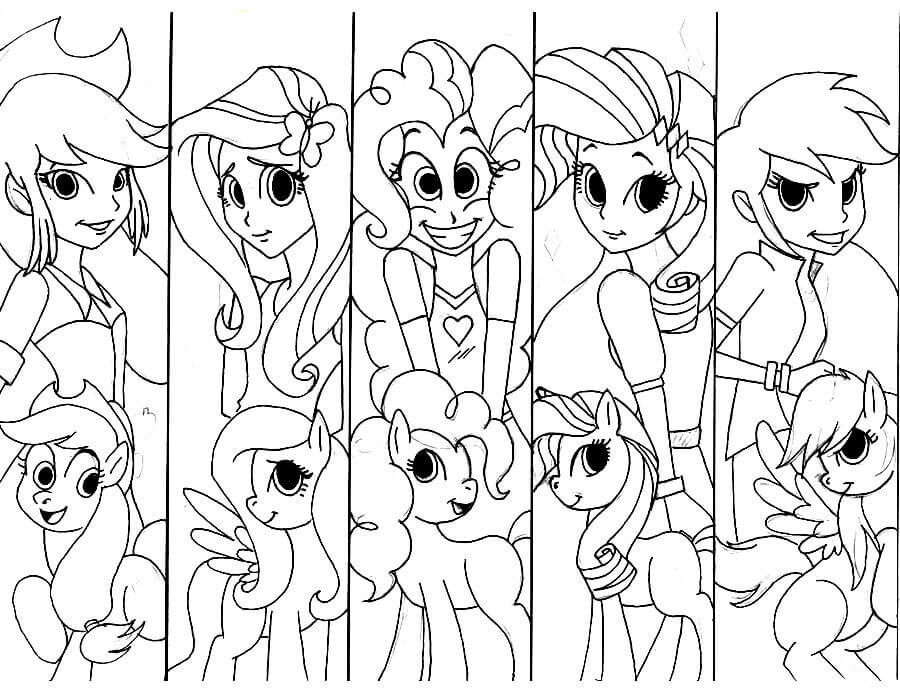 This is hands down one of the best My Little Pony Equestria Girls coloring pages. It features five leading characters of the series along with their corresponding ponies. It would be pretty challenging for ordinary people to guess the ponies by seeing this coloring page. But this challenge would be nothing for die-hard MLP Equestria Girls fans. We can’t even imagine how beautiful this sheet will look decked up in beautiful colors of respective ponies and their humanoid versions. 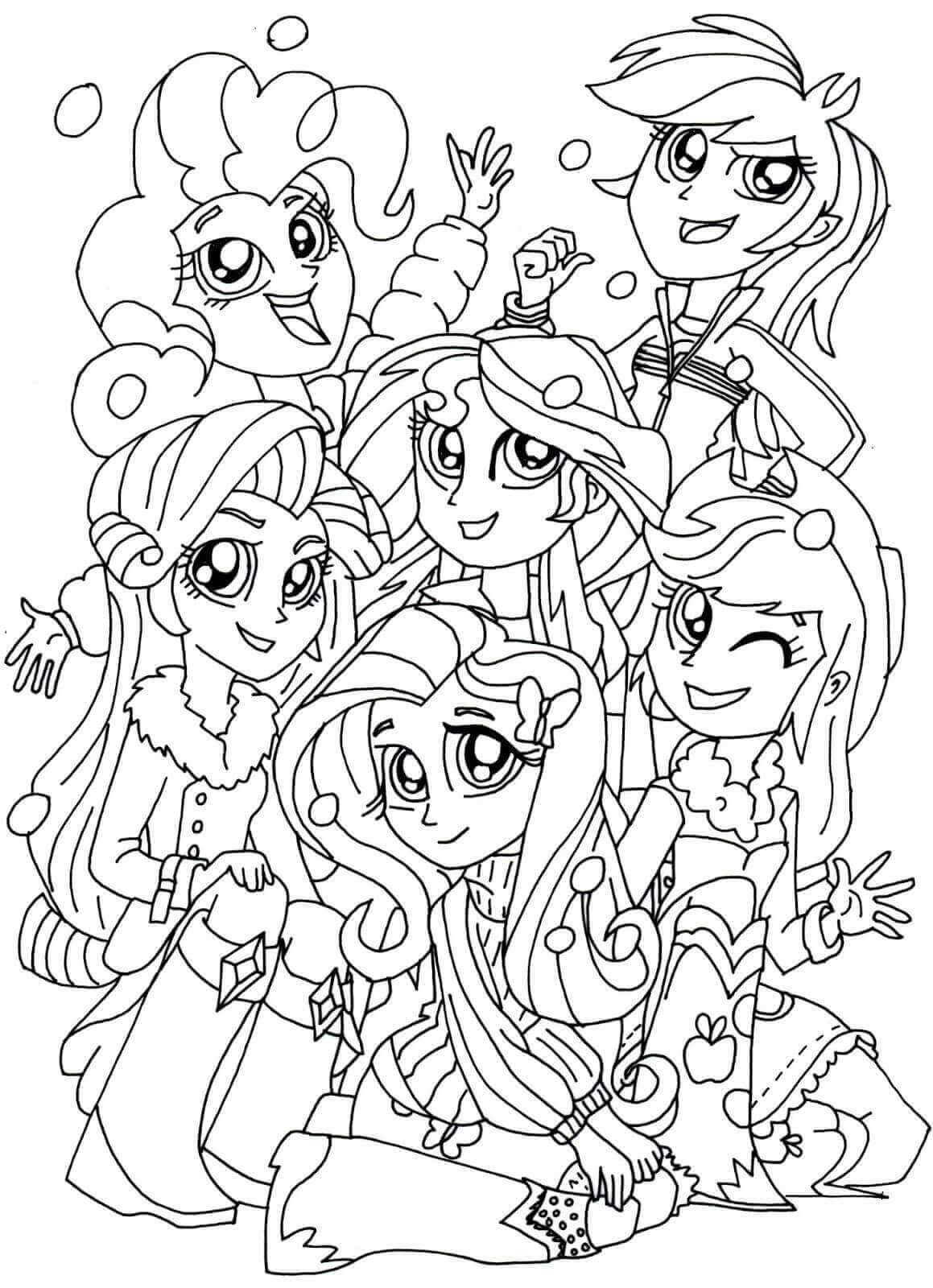 Here’s a coloring page of the Rainbooms, also known as the Sonic Rainbooms and Crystal Rainbooms, a band featured in MLP Equestria Girls. The band members include Twilight on lead vocals, Applejack on bass, Rainbow Dash on electric guitar, Fluttershy on the tambourine, Pinkie Pie on the drums, and Rarity on the keytar.