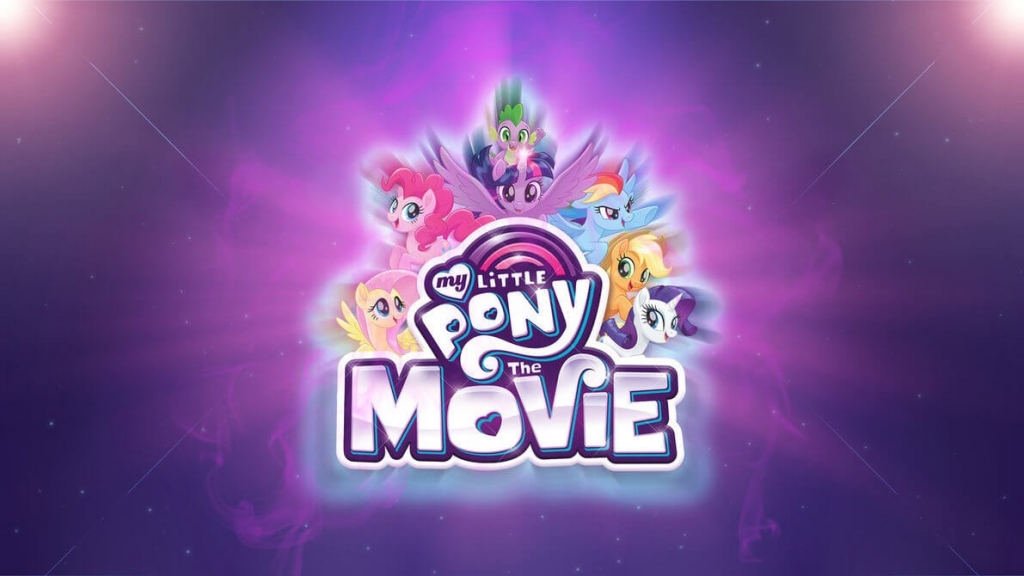 After taking the world by storm on the small screen, “My Little Pony The Movie” is all set the enter the big screen. A full length featured film, with all the major and new characters of the series “My Little Pony Friendship is Magic” is scheduled to release on the 6th of October 2017. The plot begins when a new dark force looms at Ponyville, following which the Mane 6, namely Applejack, Rainbow Dash, Twilight Sparkle, Rarity, Pinkie Pie and Fluttershy embark on a journey beyond Equestria save to their homes, meet new friends and face exciting challenges. So children, if you’re hunting for some of the coolest and unique printable My Little Pony the Movie coloring pages, you have landed at the right place. Below is our gallery of printable My Little Pony the Movie coloring sheets for you to download. Take a look.

Here’s a coloring page of the logo of the “My Little Pony the Movie”. The teaser and trailer of the movie, released along with movies “Smurfs The Lost Village” and “ Despicable Me 3” respectively have received pretty positive reviews. So you can expect the movie to spread equal or even more magic.

This magnanimous coloring page features the sea ponies, few of the primary characters of this series. This isn’t the first time we see sea ponies on My Little Pony. They first appeared in the book “Under the Sparkling Sea”, in which the main seaponies visit the underwater kingdom of Aquastria.

[ Read: Under The Sea Coloring Pages ]

Here’s a coloring page of Queen Novo, female Hippogriff, who turned into a seapony and appears as Skystar’s mother in “My Little Pony the Movie” coloring pages. She rules over Seaquestria and enjoys the finer things in life with her close friends.  If you look closely, the design of Queen Pony is made along with lines of male peacocks.

Finally, finally, the character from Gameloft’s mobile game, Songbird Serenade, is now going to grace the big screen? This female Pegasus pony, fondly known as the biggest performer of Equestria, will appear as the secondary character in the movie. Could we be any more excited? I’ve personally liked her a lot in the game and I’m sure she’ll do an excellent job in the movie too.

Tempest Shadow, the mauve pony with a bright pink mane, is one of the few broken horned ponies. She’s the main antagonist of the “My Little Pony, the Movie” She looks so menacing that anyone can get petrified just by one glance of her. But Tempest Shadow wasn’t always so bitter. A troubled past made her what she is today.

Meet Princess Skystar, the female sea pony and one of the most significant characters of the movie. This chatty, curious, but always bored young princess spends most of her time in Seaquestria making friends with shells and giving them adorable names.

Here’s the coloring page of one of the most lovable characters of My Little Pony series, Spike. Spike is originally the male baby dragon and the best friend and assistance of Twilight Sparkle. His special feature includes delivering messages and scrolls to and from Princess Celestia by using his green fire breath. Spike is an adorable pinkish purple dragon with green spikes:

Here’s a coloring page of Queen Novo and Princess Skystar, the famous mother daughter duo of the Seaquestria. Princess Skystar is in dire need to make new friends and go on adventures, a dream, which comes true when Queen Novo allows her to help the ponies in their quest.

Here’s a lovely coloring page Spike and Songbird Serenade dancing to the beautiful tunes. We have a feeling that both the characters will play a significant character in the coming movie. What do you think?

How beautiful does Princess Skystar look posing for the picture? It’s probably after the Mane 6 accepts her as one of her own and takes her on adrenaline pumping adventures and quests, things she had been waiting for since forever.

Last, but not least, here’s another, somewhat similar coloring page of the seaponies from this movie with the logo of the film in the center. The seaponies, referred to as the cousins of earth ponies, resemble sea horses greatly. The male seaponies are called, Mermares, which makes quite a bit of sense. These sea ponies have fish, scales, and scales and are little introvert.