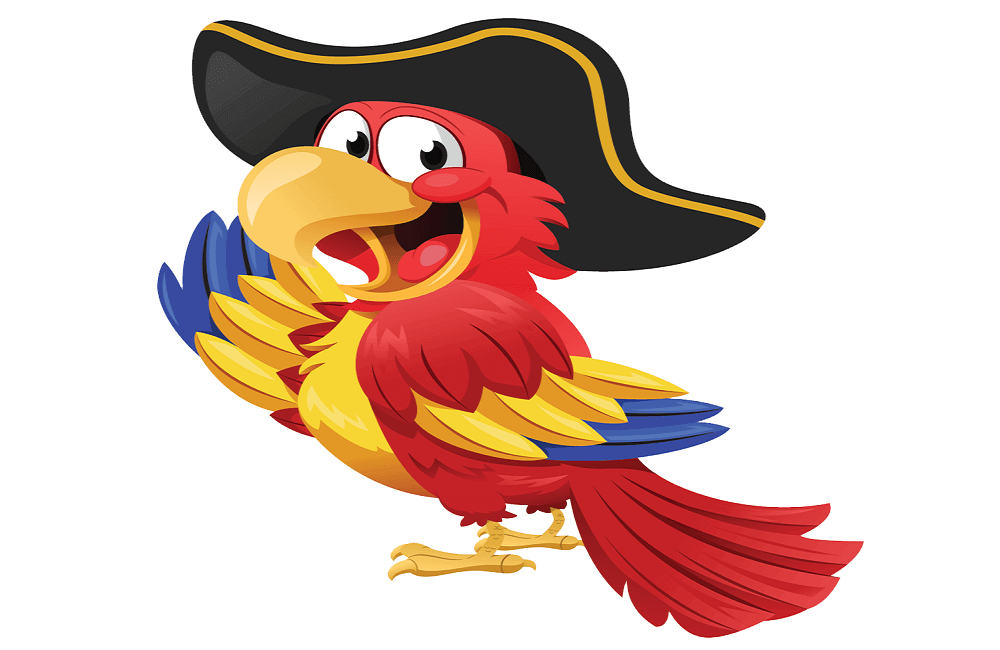 Can you think of something else that can speak like us, humans? Yes, there are quite a few species of birds that can imitate or mimic the human voice. Today’s collection of coloring pages is inspired by one such endearing bird that is also popular as pets. We are talking about parrots.

Belonging to the order Psittaciformes, Parrots can be found mostly in the tropical and subtropical areas. Their popularity as pets can be attributed to their ability to imitate human speech. Most parrots are colorful, with a mix of greens and reds being the most recognized color combination.

Parrots are easily identified by their characteristic features like the strong and curved bills, clawed zygodactyl feet that can hold things, strong legs, and their upright stance. Different parrot species vary in terms of their size, making them the most variably sized bird with respect to length. Most species also form a lifelong bond with couples always staying together, even in large groups. Let’s jump right in and discover the many different species as well as different facets of this “talking” bird through this interesting collection of parrot coloring sheets to print. 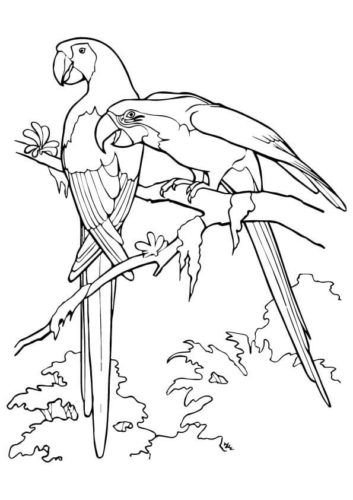 Starting off today’s collection is an Old World parrot species, African Grey Parrots. While they are mostly grey in color, their tails have red feathers, and their bills are black. Also known as Congo Grey Parrot or simply Grey Parrot, most grow up to about 13 inches in length with a wingspan ranging between 18 – 20 inches. 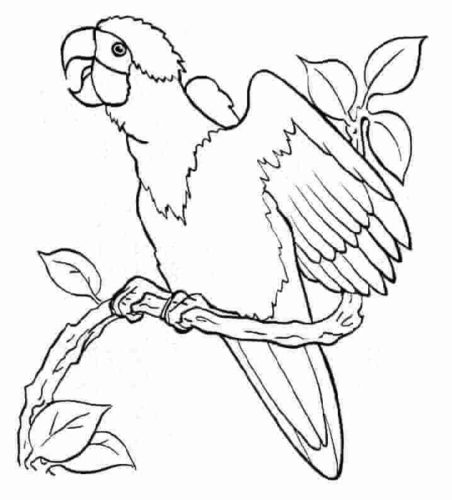 From the Old World, we now bring you parrot species belonging to the New World. Named as Amazon Parrots, these birds inhabit the areas starting from South America and moving towards Mexico and the Caribbean. Belonging to the genus Amazona, Amazon Parrots come in predominantly green colors with a mix of other colors that can get quite vivid. 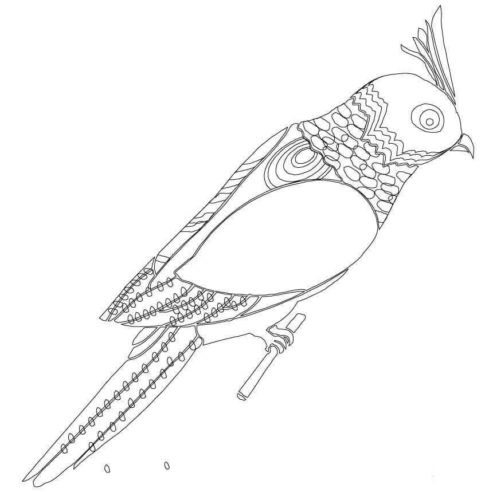 Nicknamed as the Budgie, the Budgerigar parrots belong to the genus Melopsittacus and exhibit green and yellow colors with black markings on their backs, wings, and napes. They have long tails and are seed-eating parrots. 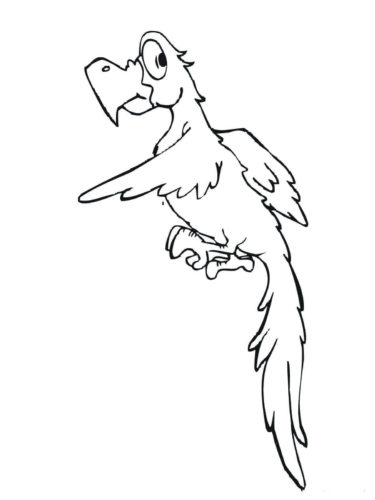 Does this look like the previous parrot illustration of Budgerigar? Well, that’s because Budgerigar species belongs to a group of parrots termed as Parakeet. Characterized by their long tail feathers, small to medium size, and seed-eating diet, Parakeets comprise around 115 parrot species.

After that cartoon illustration of Parakeet, we have a more animated sketch of a cartoon parrot. Using the wings as hands, gesticulating in the air, this happy cartoon parrot seems to be delivering a special talk on climate change effects on their habitat. 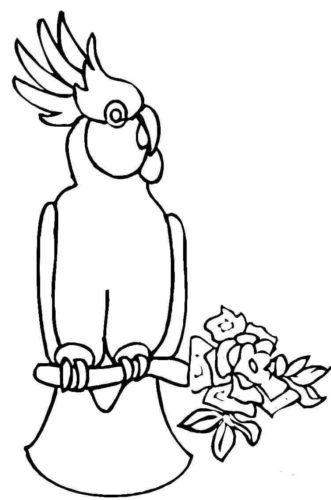 There are 21 parrot species in the family Cacatuidae and any of these species is known as Cockatoo. They are prominently found along the Australasian region, like the Philippines, Indonesia, New Guinea, and of course, Australia. Less colorful than other parrot species, Cockatoos are easily recognized by their crests and curved bills. 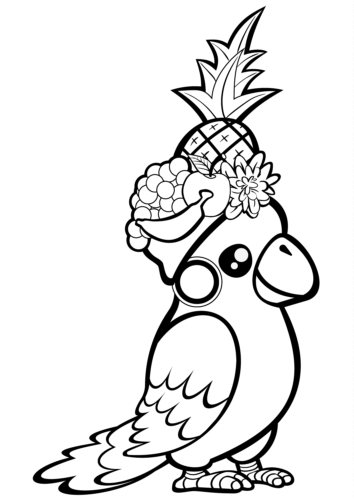 Getting into the fun spirit, this parrot has come wearing a collection of fruits as a hat on its head. Can you identify all the fruits? Be sure to fill in the appropriate colors for each of the fruits as well as for this trendy parrot. 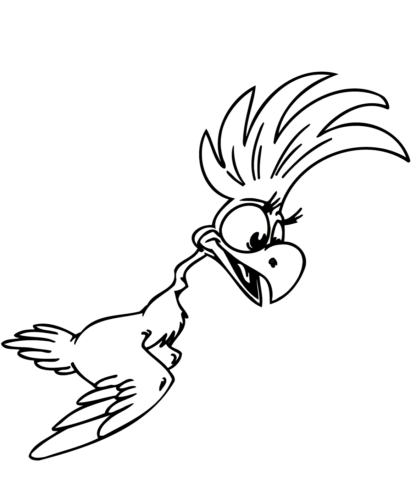 If the earlier parrot was fashionable, this one has gone wild. Look at this funny illustration of a parrot with its exaggerated expression and that thin, long neck. Print this coloring page and give this hilarious illustration some of your funny colors. 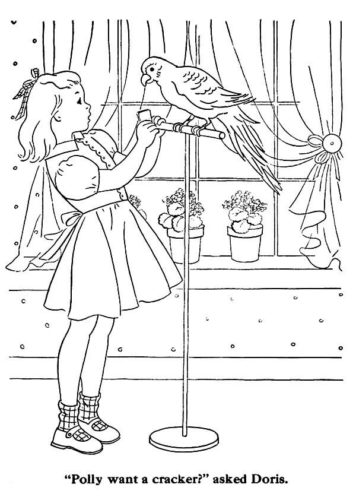 During the evening tea-time, Doris had saved some cracker biscuits for her pet parrot. Here she is kindly asking her pet Polly if she’d like to munch on some crackers. They seem to have a really good bond. If you have a pet, make sure you treat them with kindness. 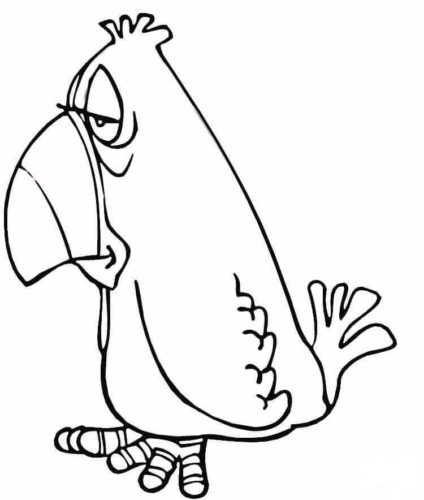 All is not well on this coloring page. Wonder why this parrot is looking so grumpy! Is it the missing colors? Maybe you can help. Print this coloring page and fill it with vibrant colors to change the mood of this grumpy parrot. 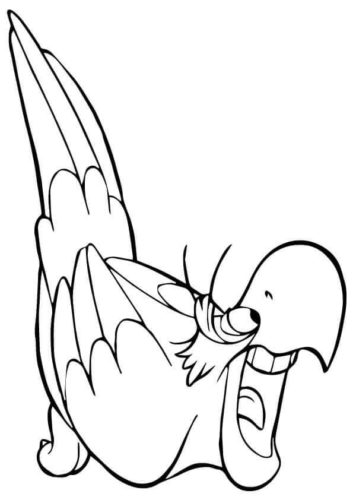 Now we have a celebrity parrot among us. From the world of Disney’s Aladdin, we have Iago – the sarcastic and short-tempered parrot. He plays the pet of the main antagonist Jafar. You can see how loud-mouthed he is in this interesting illustration. 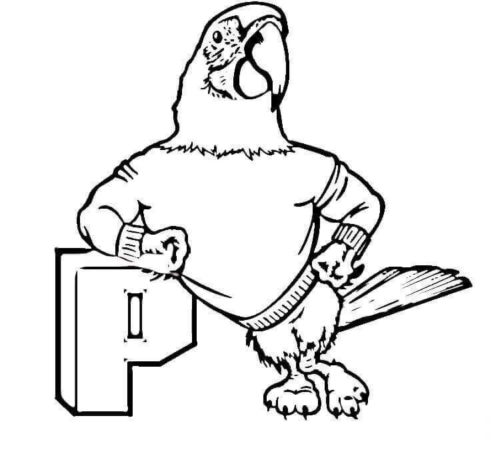 Time now for today’s alphabet lesson. It’s pretty clear which letter we are going to learn about, right? Yes, it’s P for Parrot. To teach you this lesson, we have a proud parrot teacher waiting for you on this coloring page. 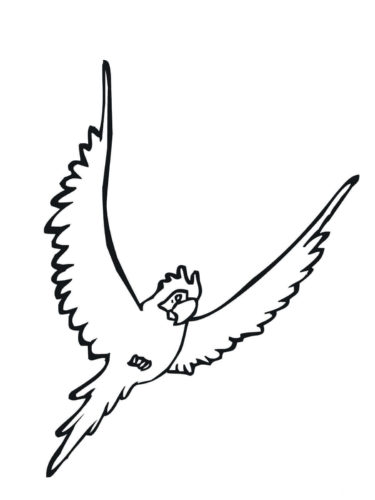 Here’s a flying parakeet welcoming you in this illustration. With its slender build, look at this parakeet spreading its wings wide as it soars high in the sky. Print this page and finish coloring this illustration with flying colors. 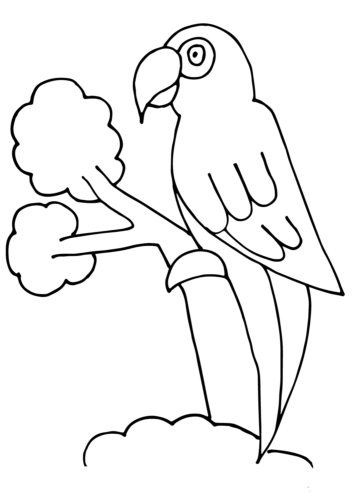 This one is quite simple and easy enough for kids to color. If you are new to coloring, this simple illustration of a parrot perched on a branch should be easy for you. As long as you keep within the lines, you will do fine. 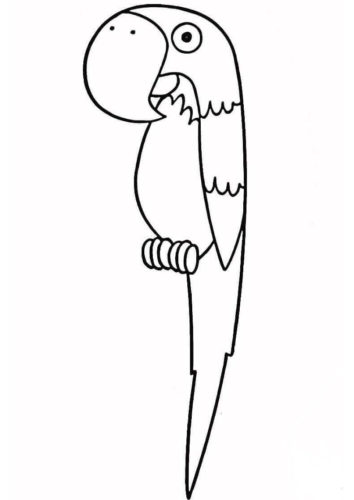 For those among you who have yet to start school, here’s an even simpler illustration to get started on your coloring lesson. Look at those large, curved bill and circular eyes. Do your best to turn this into a colorful parrot illustration.

There are so many parrots on this coloring page. Are you getting lost in this madness? No wonder a group of parrots is called a pandemonium. That’s right. From the flying to the perched one, be sure to give this pandemonium of parrots some wonderful set of colors. 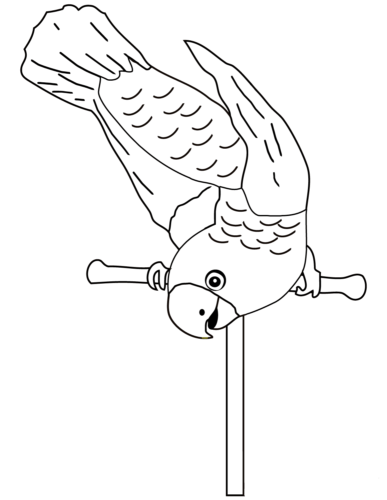 Trying to make sure to get your attention, this athletic parrot is doing all sorts of tricks while perched on the stand. Look at the stance! He is almost upside down. Print this coloring page and give it some exciting colors. 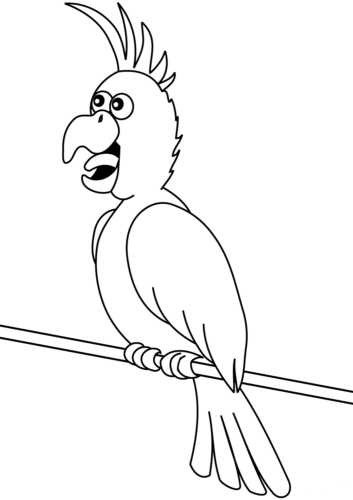 If the other parrot was quietly doing some acrobatics for your attention, this parrot is going wild on this coloring page. It has been calling out, loudly, for you to pay heed to it. Quickly fill in some colors to quiet down this demanding parrot. 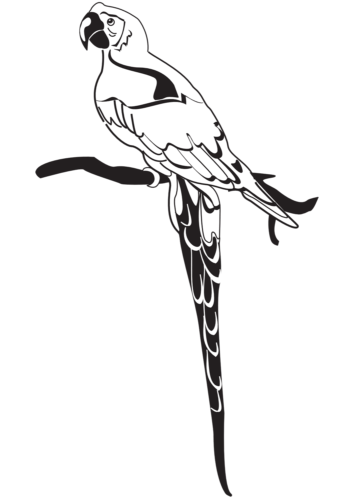 In complete contrast from the earlier illustration, we have elegance personified through this graceful parrot on this coloring page. Look at the long, tapering tail and the calm, elegant pose. Print this coloring page and fill it with classy colors. 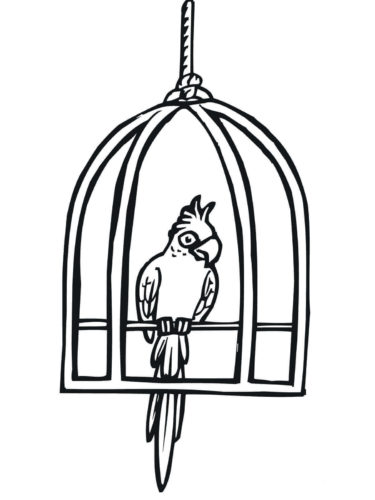 Parrots are kept as pets around the world. As pets, they are kept in cages in order to prevent them from flying off or flying about inside the house. Here we have an example of a parrot inside a cage for you to color. 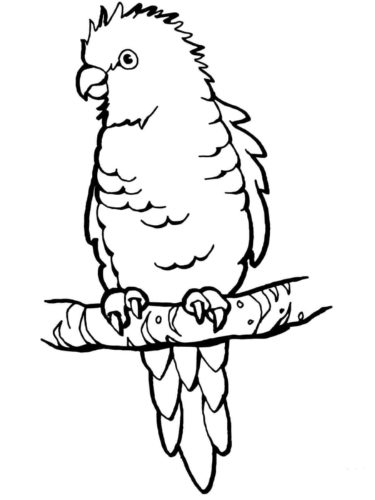 Free in the wild, this parrot has been pruning its feathers after getting soaked in the rain. You can see she is looking quite fluffy in this illustration. Print this coloring page and add some warm colors to comfort her. 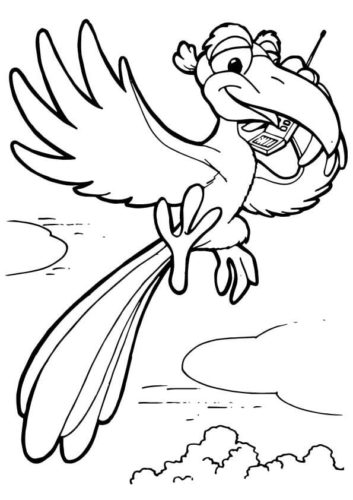 A witty illustration showcasing the talking ability of a parrot. Holding a phone with one of his wings seems like the parrot is informing his folks at home he is on the way home. Help him reach faster by filling in some urgent colors on this coloring page.

After getting home, the flying parrot gave his wife the beautifully beaded necklace he had bought for her. She is loving the necklace, as she checks each bead playfully. It’s always a good feeling to get surprise gifts. 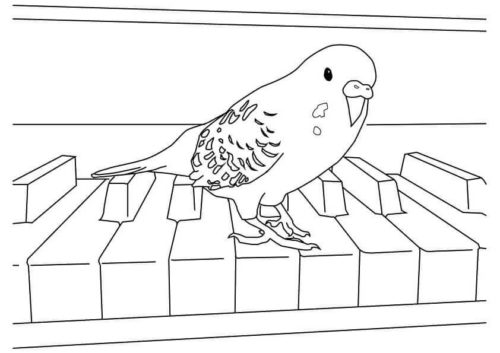 Here we have a parrot species belonging to the group of smallest New World parrots known as the Parrotlets. Unlike the Parakeets, the Parrotlets have short tails and stocky builds, as you can see from this illustration. This one seems to be enjoying the musical notes of the piano as it walks on the keys.

Is it the weather? Or about food? Can you guess what these two parrots are talking about in this illustration? You can think of the answer as you print this coloring page and fill it with colors. 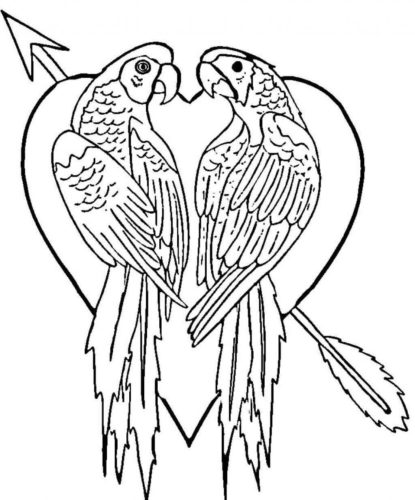 As most parrot species form lifelong bonds, if you find a parrot couple, make sure they are never separated. Just like these two lovey-dovey parrots so much in love on this coloring page.

As the afternoon turns into evening, it is time for some tea and snacks in the house. While humans have their tea and cakes, they have given their pet parrots a few crackers to eat. She seems to be enjoying it so much. 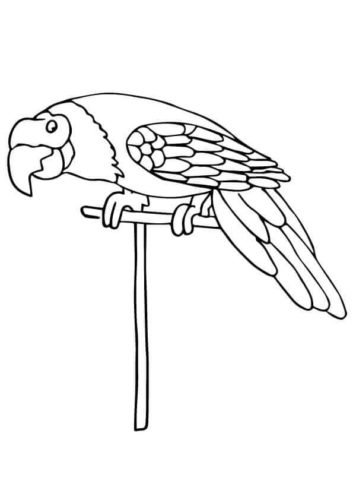 Pionus Parrots are medium in size with chunky bodies and short square tail. While they are native to Mexico, Central and South America, Pionus Parrots are only superficially similar to Amazon Parrots. Unlike them, their feathers are iridescent, and their wing-strokes are deeper. 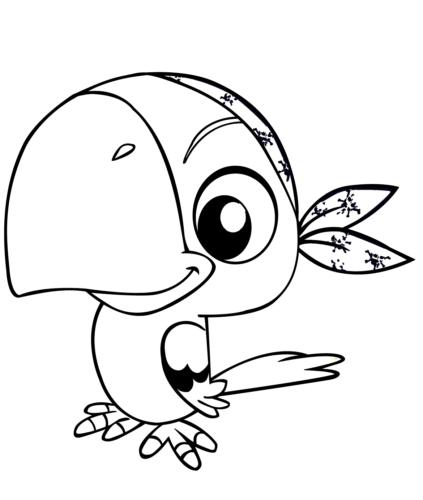 Living the sea life to the maximum, the Pirate Parrots are the loyal companion of pirates in the wild sea. While pirates are supposed to be scary, this Pirate Parrot looks so cute and adorable. 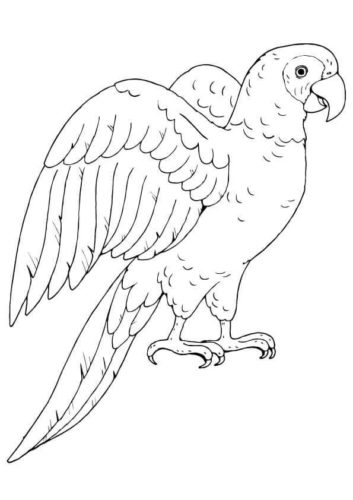 There are about ten parrot species belonging to the genus Poicephalus, existing in slightly differing forms and subspecies across the Afrotropical region. They are native to Sub-Saharan Africa and have been kept as pets for many centuries. 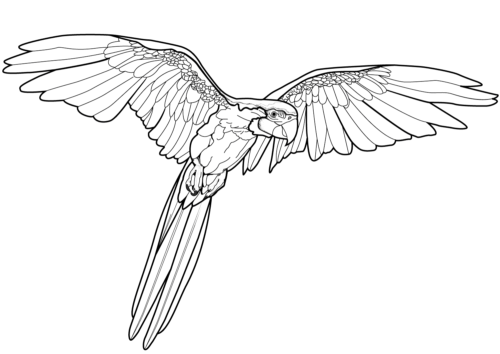 The details are intricate in this realistic illustration of the parrot. The widespread wings, the head, or the tail, be sure to fill in the colors carefully to bring out the life-like colorful details. 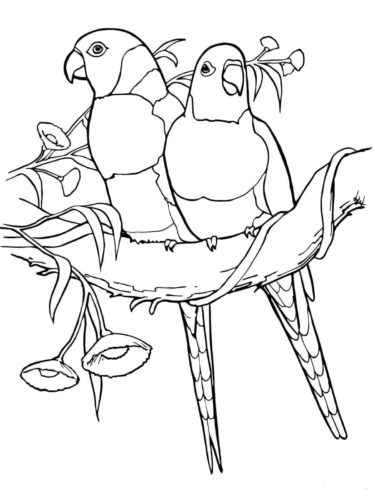 All the way from their wooded habitats in northern Australia, we have a pair of Red-collared Lorikeets greeting you on this coloring page. They have a remarkable orange-red collar over the nape, unlike any other species in the rainbow Lorikeet group. Bring out the vibrancy through your coloring skills. 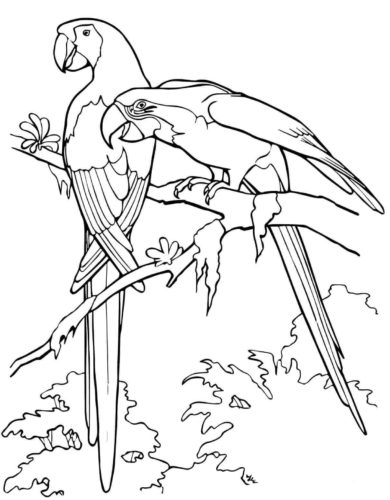 From Australia, we are headed to the evergreen forests of Central and South America to meet this pair of Scarlet Macaws. Red, yellow, and blue in color, the Scarlet Macaws are part of the Neotropical parrots known as macaws.

Sisserou Parrots are known by other names like the Imperial Amazon and Dominican Amazon. Found only on the Dominican Island, it is rightfully the national bird of Dominica. Fill in dark purple on the chest, dark green on feathers and upper region, black on the feather tips. The eye-ring is dark brown with orange and red-eye.

Perched regally on a tree branch, this is the Sulphur-crested Cockatoo. They come in overall white color with a tinge of yellow on the underwing and undertail, black bill, and grey legs. The crowning glory, the crest is yellow in color. You will find them in wooded habitats in Australia, New Guinea, and some Indonesian islands.

With that regal Cockatoo illustration, we have come to the end of this intriguing printable collection of Parrot coloring pages. We hope you not only enjoyed coloring these sheets but also found the information fascinating and fun. Along with other birds like ravens, jays and crows, the parrots are considered one of the most intelligent birds. This has been demonstrated through scientific testing of their ability to use language, and their skills at using tools and solving puzzles.