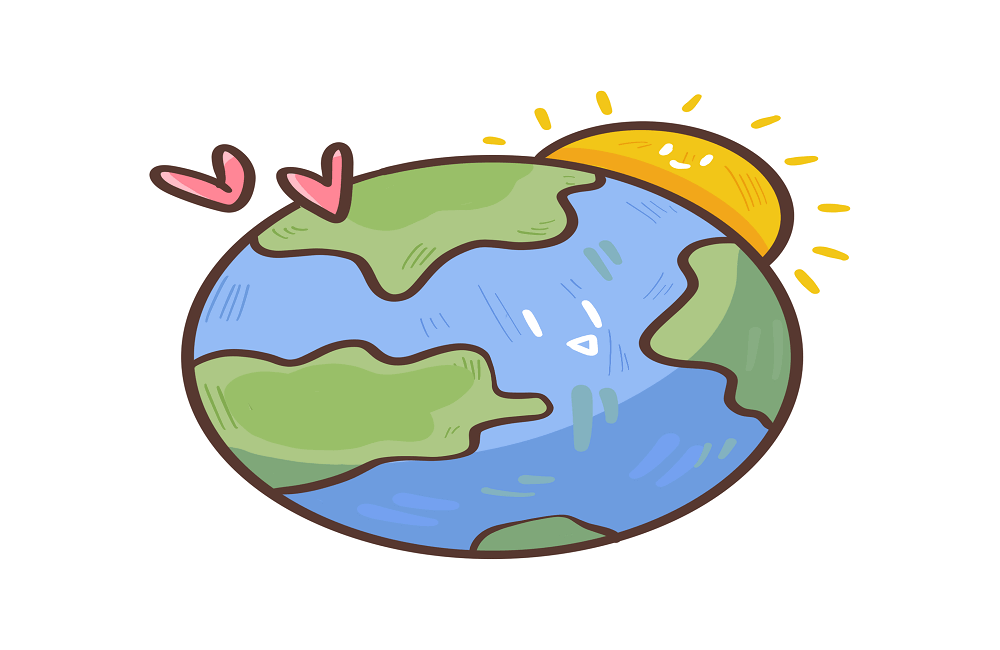 Going about our daily lives on earth, we rarely think about the vast universe beyond. But when we look up at the sky, especially at night, at the moon and the stars, it always fills us with wonder about our lives on earth. In today’s collection of coloring pages, you will discover more about Earth and other planets of our Solar System.

A planet is a rounded astronomical body that orbits around a star. In our Solar System, the Sun is the star at the center with all eight planets, including the earth, orbiting around it. While Pluto was considered to be the ninth planet, since the new definition of planets by the International Astronomical Union, it is now identified as a dwarf planet.

The planets in our Solar System are categorized as terrestrials and giant planets. The first four nearest to the Sun, Mercury, Venus, Earth, and Mars are smaller terrestrial planets, while the further distant are four giant planets; Jupiter and Saturn are gas giants, Uranus and Neptune are ice giants.

Let’s get our planetary journey started through this interesting and informative collection of planets colouring pages to print. 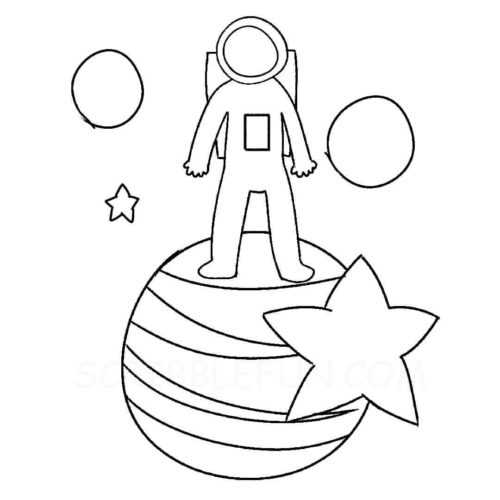 We are beginning the collection with triumphant news. The astronaut, a trained person to go on space mission, has successfully landed on a planet. While this is simply science fiction at the moment, in the future we might have humans landing on another planet. Given the size difference between a human and a planet, this illustration is out of proportion but a cool one to color. 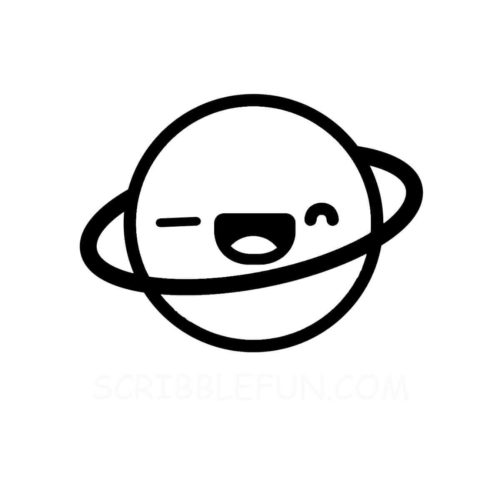 Attributing human expression to objects is a fun way of making them adorable and cute. This has been achieved successfully by the cartoon formats. Taking a cue from the numerous cartoons, someone has humanized this planet. Print this coloring page and give this cartoon planet some real colors. 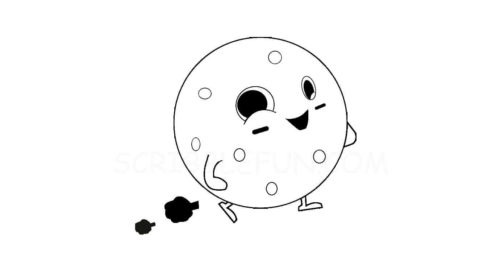 Unlike the earlier cartoon planet that had a human facial expression, this cute cartoon planet even has hands and legs. Look at the laugh on its face with a twinkle in its eyes. It seems to be running somewhere. Maybe it’s coming to you so that you can fill in some wonderful set of colors. 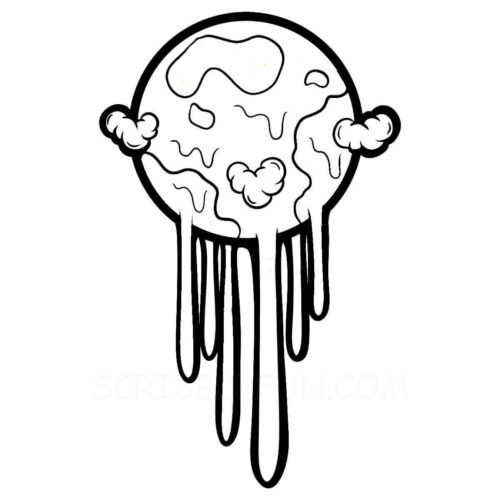 Climate change has been a cause of worry for the entire humankind with several countries working out policies to minimize the impact it has on earth. One of the major pieces of evidence is global warming, which is melting glaciers and rising air temperature. Here’s a creative illustration showcasing how global warming is melting the earth. 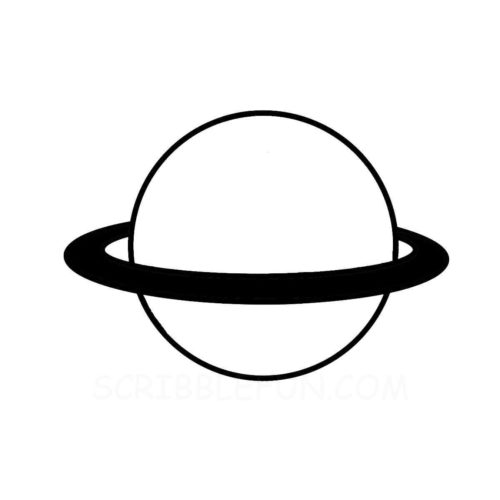 This is a simplistic illustration of the eighth planet in our Solar System – Neptune. With a mass that is about seventeen times that of Earth, Neptune is an ice giant and the densest among the giant planets. Print this coloring page and add some celestial colors to this illustration. 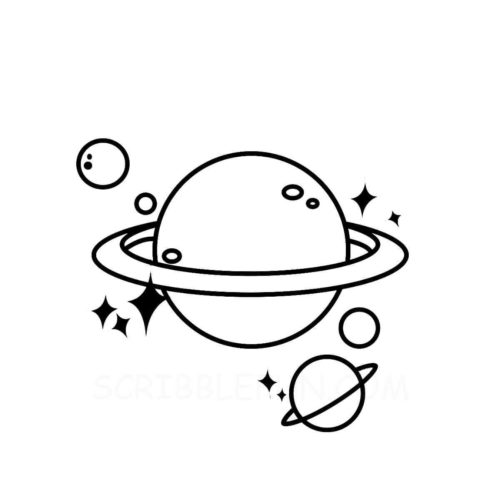 For all the kids who are just getting the hang of coloring and gearing to become an expert, here’s a planet coloring page for you. This creative illustration has quite a few of the planets drawn together, although not scientifically accurate. Bring this page to life by coloring with accuracy. 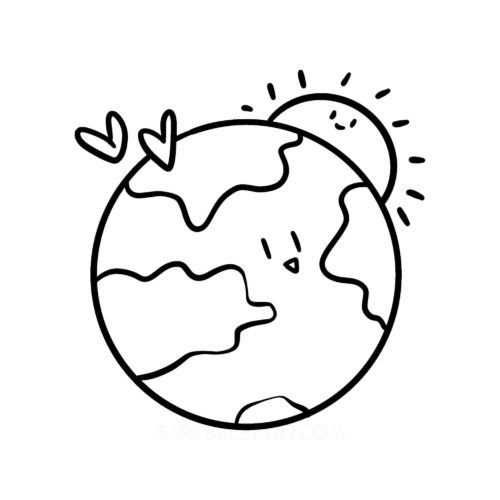 Such a lovely illustration of our planet Earth and the Sun. As the sun shines brightly, making life possible on Earth, our home planet seems to be smiling wide in gratitude. We should make sure to work towards keeping our home planet liveable for future generations by living sustainably. 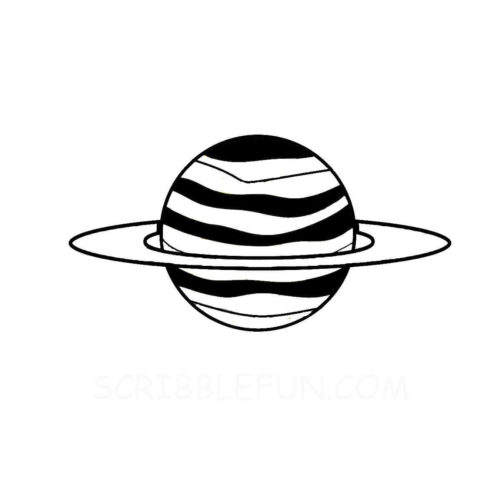 The mightiest among all the planets in our Solar System, here is Jupiter. Looking magnificent, Jupiter is a gas giant which has been observed from earth since prehistoric times. You can also see Jupiter at night, as it is one of the three brightest natural objects in the sky. Add some grand colors to this grand planet illustration. 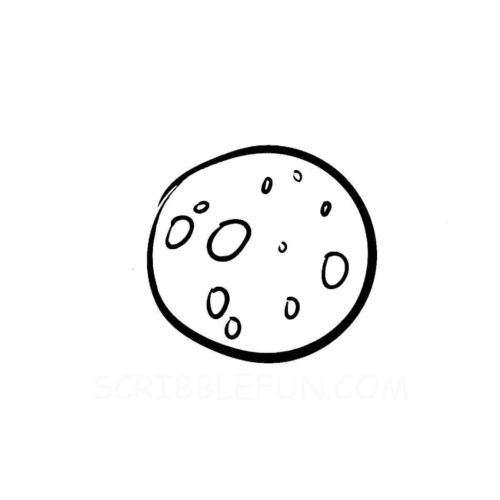 After the fifth planet Jupiter, here we have the fourth one from the Sun, Mars. Also known as the “Red Planet”, Mars is the closest planet that is believed to be liveable. There are several scientific pieces of research as well as explorations aimed at knowing more about the planet. For now, admire and appreciate this planet by filling this page with reddish-orange colors. 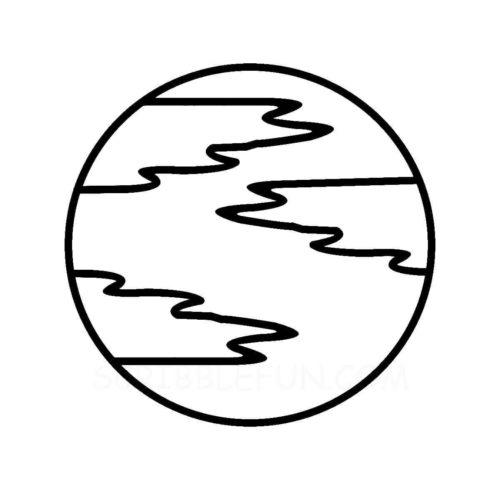 You have colored the largest planet, Jupiter and now on this colouring page we have the smallest planet of the Solar System, Mercury. It is also the closest to the Sun, taking the shortest time to orbit. As with Jupiter and Venus, even Mercury can be seen but it is harder to observe. Add bright colors to animate this planet. 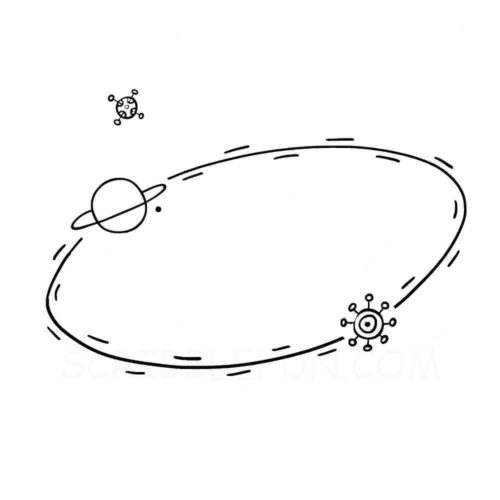 Planets move around the Sun because of the gravitational pull, creating a curved trajectory. This pathway is known as an orbit. An orbit need not necessarily be the trajectory of the planet around a star, it is also the path that natural satellites take around a planet, like the moon around the Earth. 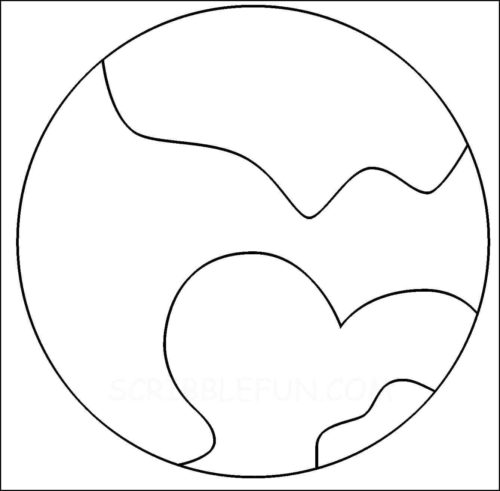 Once part of our Solar System as the ninth planet, Pluto is now considered a dwarf planet after the new definition of a planet was formed in 2006. This was done as several other objects of similar size were found in the Kuiper belt or a ring of bodies that is beyond Neptune’s orbit. Celebrate this former planet with realistic colors. 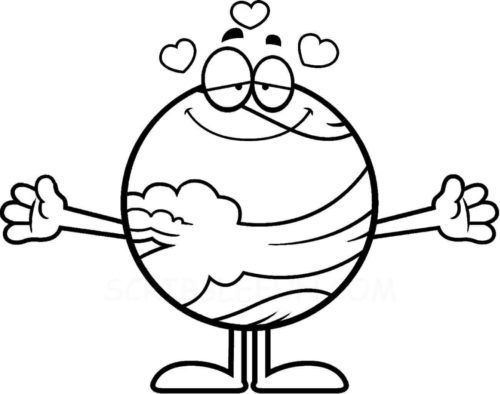 Like Jupiter and Mercury, Venus can be seen from the earth at night. It is, in fact, the second brightest natural object that you will notice in the sky, after the moon. The second closest planet from the Sun, its name is inspired by the Roman goddess of beauty and love. That’s why you see this Venus illustration welcoming you with open arms. 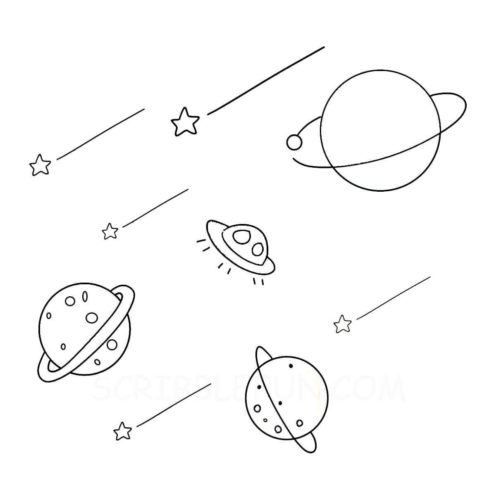 Did you know that earlier it was thought that the planets were actually orbiting the Earth? It was in the 17th century that evidence was produced they actually orbit the Sun. Here you have several planets being illustrated close to each other. There are also several different falling stars. If you look closely, you will also see a clever spacecraft drawn at the center. 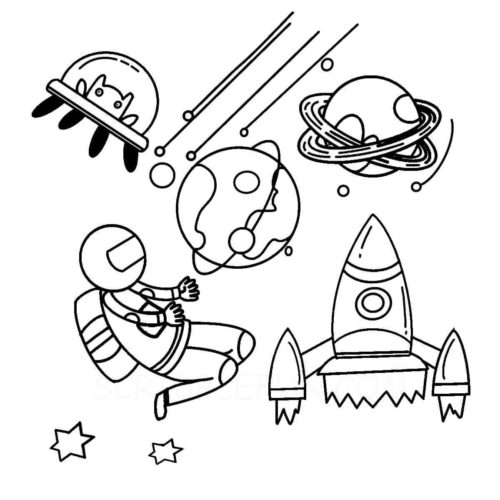 Combining several different things associated with astronomy and space explorations, here is a coloring page for kids to color. Having fun and easy design, you can spot an astronaut and even a rocket. You can guess other elements as you print and color this cool illustration. 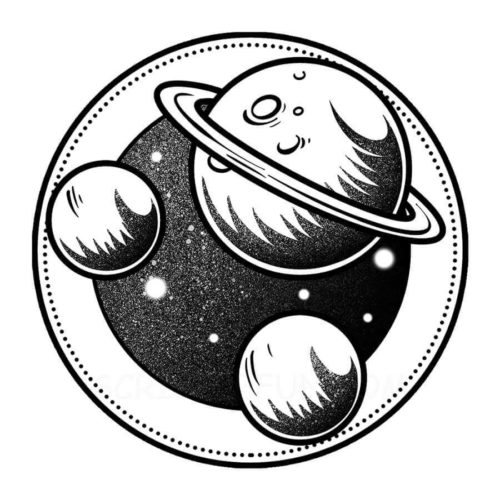 Creativity is on full display on this coloring page about planets. From the shape to the design, this artistic illustration is perfect for those skilled at coloring. Print this page and add your own set of blazing colors to make this planet poster pop up. 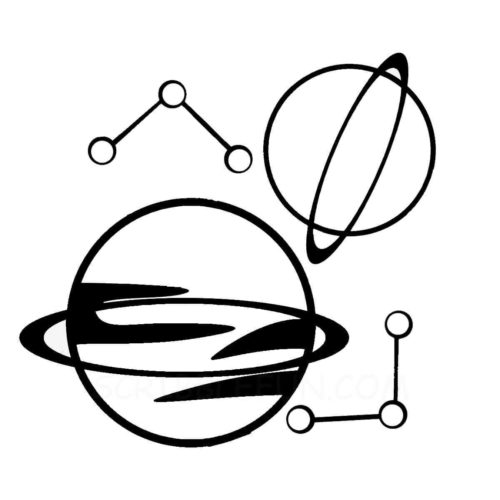 After the planet poster for experts, this planet illustration has simplistic shapes and designs, easy enough for those who are new to coloring. You can see planets with rings illustrated here which look like Saturn. Simply bring this easy illustration to life by carefully coloring within the lines. 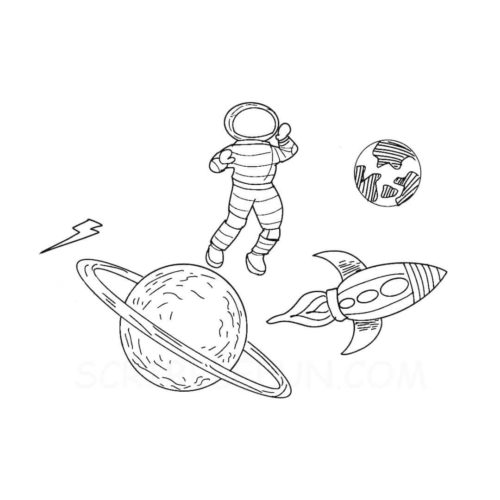 Talking about Saturn, this imaginative coloring page shows an astronaut making it to as far a planet as Saturn, which is the sixth in position from the Sun. In reality, the first time Saturn was seen, although in low picture quality, was during the flyby by Pioneer 11 in 1979. 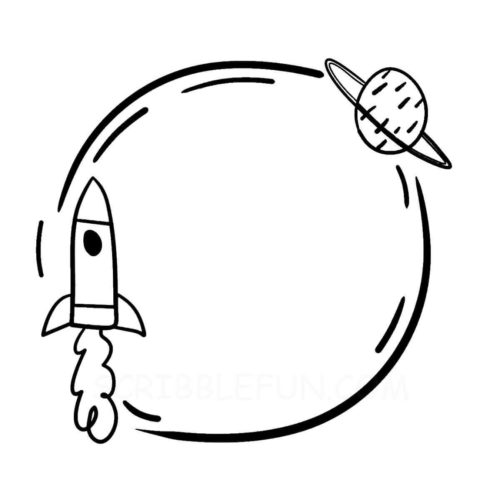 After the first flyby in 1979, the Cassini–Huygens space probe successfully entered Saturn’s orbit in 2004. Since then it has made several discoveries and confirmations like the existence of eight new satellites and 20 times larger hurricanes than those on Earth. 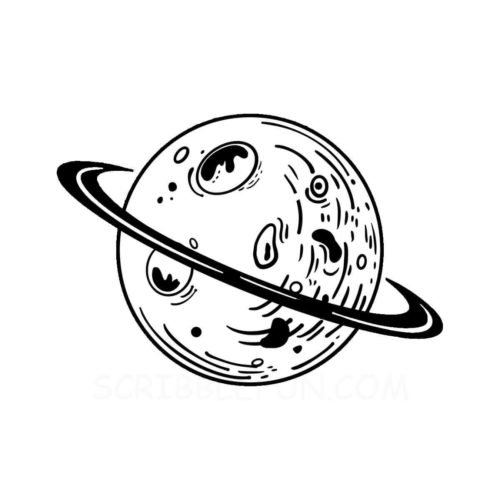 After Jupiter, Saturn is the largest planet in our Solar System having 95 times more volume than Earth. Like Jupiter, Saturn is also a gas giant. Perhaps, the most recognizable feature of Saturn is the ring system, which is most prominent. Be sure to capture every facet of this cool Saturn illustration with your coloring skills. 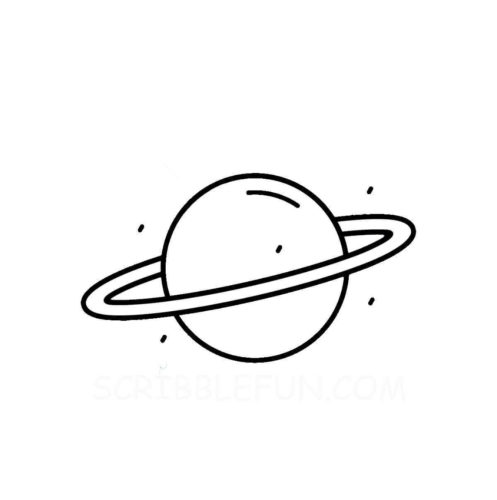 One of the two ice giant planets, Uranus is seventh in position from the Sun and gets its name from a Greek god. Like Neptune, Uranus is mainly composed of materials like methane, water, and ammonia. Print this coloring page and give this planet with the third-largest mass some exceptional colors.

With that look at the ice giant planet of Uranus, we have reached the end of this fascinating printable collection of planet coloring sheets. Hope you had fun filling colors into these fun, interesting, and informative planetary coloring pages. Did you read about the latest space exploration news? NASA’s Mars 2020 Perseverance Rover successfully landed on Mars recently and has begun its exploration.