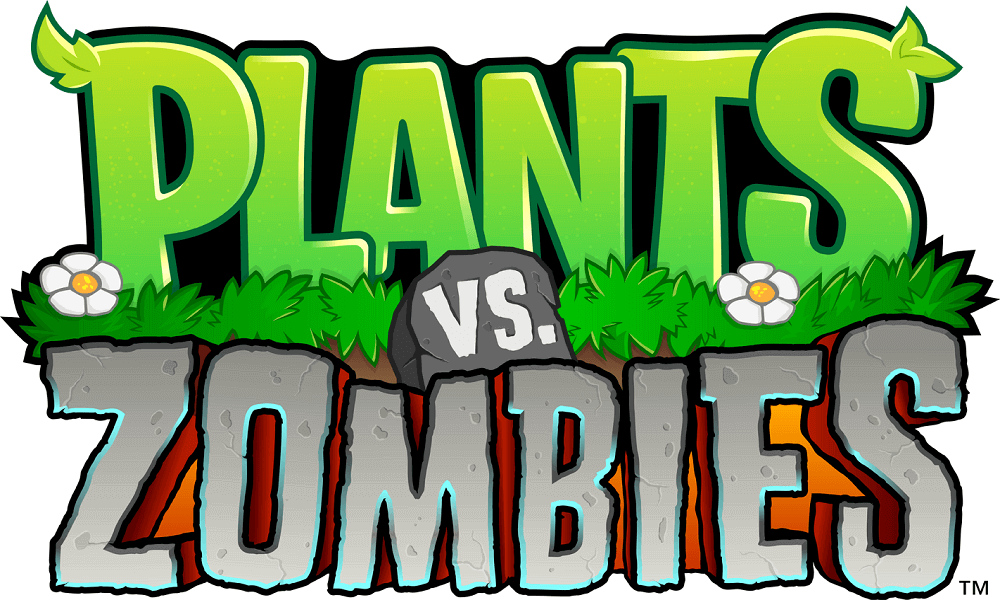 Plants Vs Zombies is a popular gaming series developed by PopCap Games based in America that was first available on computers in 2009, and now can be played on different platforms like the internet, Mac, Xbox, and PlayStation consoles, mobile phones, Nintendo DS, iPod Classic, and Touch. The game features two opposing groups – the plants and the zombies. The zombies are always trying to enter the house of the players as they want to eat the brain of the players. The players have to employ different plants to fight this battle to stop them from doing so. The players are assisting in their effort by Crazy Dave, who always tries to stop the zombies from winning the game. The plants and the zombies are all equipped with some special abilities to play the game. In this fight of good over evil, we’ve got you free printable Plants Vs Zombies coloring pages. Fill these free Plants vs Zombies coloring sheets to print using your imagination to its fullest. 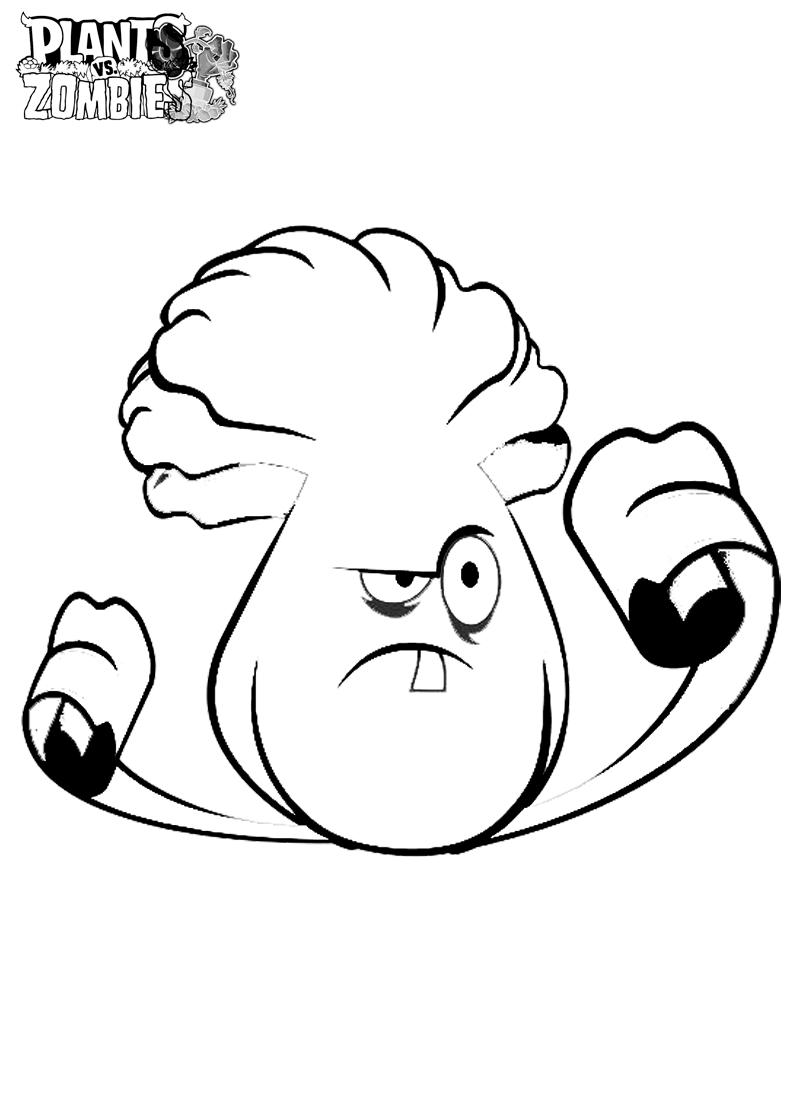 Bonk Choy is a plant character in the series. His name has been derived from Chinese cabbage called bok choy. Bonk is a word used to describe punching. He is green in color. He is a Kung Fu master well trained in martial arts. When Bank Choy is given the powerful plant food he gains the extra power to deliver an impactful punch in his immediate vicinity. 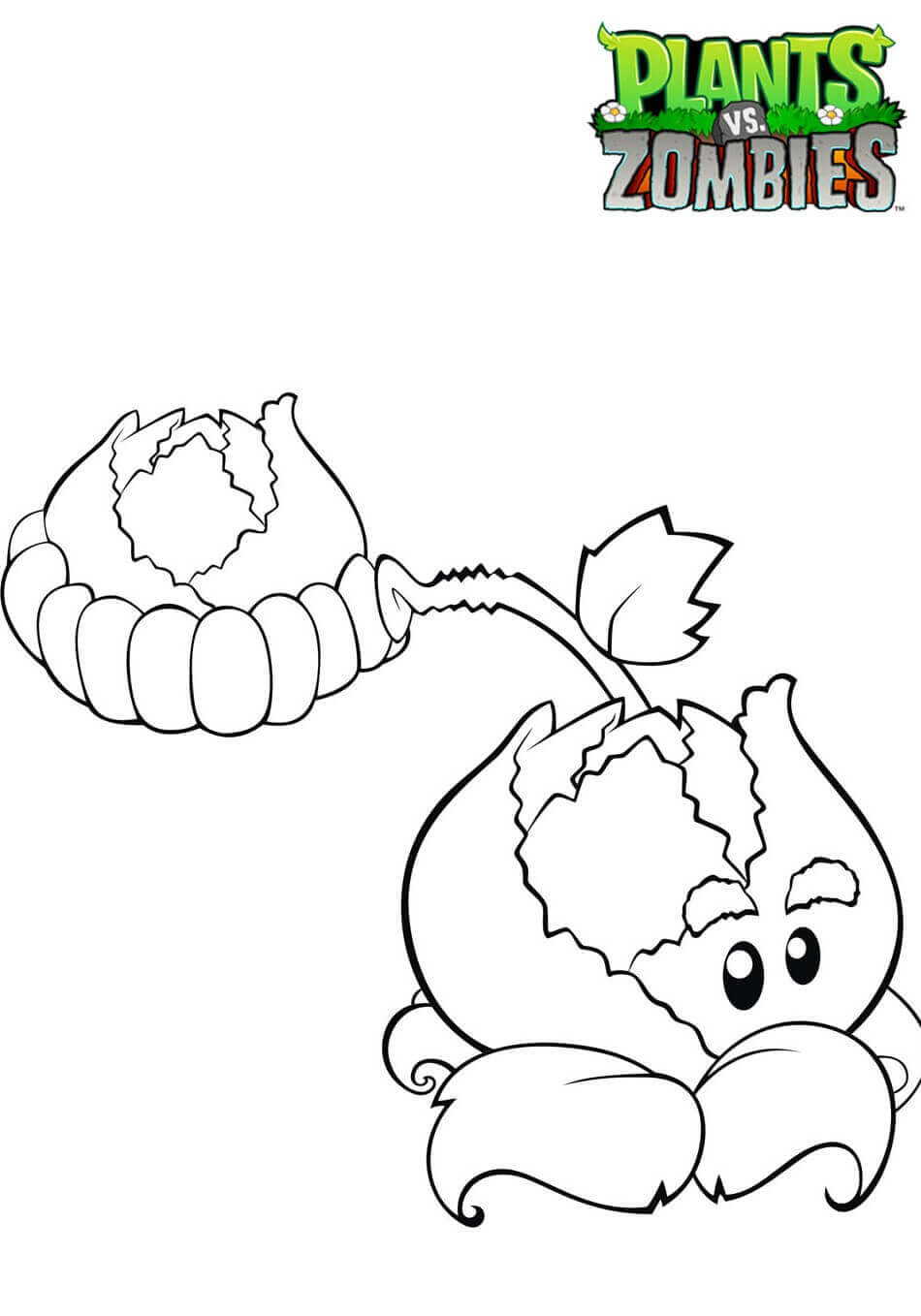 He resembles the real-life cabbage. This plant character has got the second half of his name from ‘catapult’ which is a warfare device used in ancient times to hurl stones at the enemy. In the game, Cabbage-Pult hurls cabbages at the zombies. His throw is so good that no obstruction can stop the hurled cabbage from hitting the enemy. With the plant food effect, Cabbage-Pult is able to throw larger cabbages towards the zombies, almost equivalent to throwing 10 normal cabbages.

This logo shows the frightful face of the zombie. Developed by designer George Fan, the zombie in this logo appears like a skeleton with his eyes bobbling out of his eye sockets.  Color this zombie in grayish-green with white eyes and teeth. And color the text in green and grey.

Derived from the maize crop or the corn, Kernel Pult, like Cabbage Pult is good at aiming at the enemy. He hurls corns in the normal stage and butter when fed plant food. The volatile butter is twice as powerful as his corn shot and can paralyze his enemy for 5 seconds. Color the maize parts in yellow and leaves in green.

A Sea-shroom that has never been to the sea, but dreams to visit one someday is a mushroom variety plant that can be planted only in water. He is capable of shooting short-ranged spores. As he cannot work on land and he takes time to recharge he is considered to have limited powers. But he is highly effective while working against the Dolphin Rider Zombie.

This character is based on the Venus flytrap, a carnivorous plant. Chomper’s name means to chew or munch loudly. In the series, Chomper can destroy and gulp down any zombie. However, after this, he needs about 42 seconds to regain his normal nature which makes him susceptible to zombies’ attack. For all those non-edible zombies, Chomper will bite to destroy them. When fed with plant feed, Chomper pulls inside 3 zombies and with his burp throws away the other zombies.

Sunshroom is a mushroom plant that produces sun. When planted, he produces smaller ones and as he grows to his normal size, it makes normal sun. He hates the sun so much that the moment his system makes a sun he hurls it out. When fed plant feed he grows to the maximum and produces 225 suns. It takes 7 seconds for him to recharge and get back to his normal nature.

His name is Edgar George Zomboss and he is the leader of the Zombies. He is arrogant and ruthless and fires a huge fireball or iceball every time at his opponent to destroy it. He has studied Thanatology and employs his robot, the Zombot which is formidable to fight the opponent. He comes into the game at level 5. He can absorb 1583 times the normal damage shot the first time and after that 3165 normal damage shots.

The Sunflower with his power to hurl suns at zombies; the Jalapeno with his exploding quality on seeing zombies he can destroy one entire line of zombies at one go; Cabbage Pult that can hurl cabbages; Kernel Pult that hurls corns and butter at zombies; the Squash that jumps high into the air to crush a zombie; and the Cactus that can shoot spikes have together for a group picture.

The mummy zombie is a variant of the basic zombie that eats plants direct because they are in the animation mode. The mummy zombie and the future zombie share the same groan. The mummy versions are sent to the middle of the lawn where the fight happens by sandstorms in Egypt.

This is an upgraded version of the Peashooter and has the ability to shoot four times faster than the normal Peashooter. He loves warfare and because of his ability to rapidly fire peas, he has been named Gatling Pea. With plant food, his ability increases to shooting 60 peas in 3 seconds in 3 lanes.

True to their name, these Jalapenos are hot and fiery. They are capable of exploding and finishing off an entire lane of zombies with their fire in one go. They also can melt any ice threats instantly. You need to color him bright red representing his nature.

This character can have as many heads as possible. The more the heads, the more number of peas it can shoot at the opponent. The player can increase the heads by placing another Pea Pod on the top of the existing one. At any point, it is allowed to have 5 heads together. When fed plant food all pea pods close to making a huge pea pod head that can deliver up to 5 big peas.

This one can fly over the plant zone tied to a red color balloon with an angry face. The balloon is tied around his waist. It’s only the Cactus that can bring down a Balloon Zombie. Once down this zombie can be attacked like a normal zombie. They can also be killed instantly by Blover or when they are floating over the pool lane.

These are the basic zombies guarded by the bucket over their head. The bucket which acts as a hat makes them resistant proof. The bucket can be detached from their head only by the Magnet-shroom. Once the bucket is gone, they are susceptible to attacks like normal zombies.

This plant based on true-life cactus plants that can shoot spikes as a projectile and the only one to bring down the Balloon Zombies. She is a Peashooter basically and the damage caused by her spikes is same as the Peashooter. When fed plant food, the spikes get charged with electricity and become doubly dangerous.

His character is based on an American football player. As the name suggests, he is very health conscious and works on increasing his athletic abilities. Only the Magnet Plant can remove his helmet after which he can be destroyed like the basic zombie unit.

Peashooters are the first line of defense that faces the basic zombie units as one starts the game. This plant can shoot one pea in 1.5 seconds and each shot is equivalent to deliver 1 normal damage shot. When fed with plant food, this plant converts into a Gatling Pea and gets the enormous ability to shoot up to 60 peas per two seconds.

The Sunflower plant here is introducing the players to 6 different zombie forms – the basic zombie which is weakest of all; Bucket Head Zombie with his resilient bucket that saves him; Balloon Zombie is the only one who can fly over opponent pool area; the strongest & fastest zombie – Football Zombie and Snorkel zombie which can work underwater.

This is a mushroom variant with a very limited firing range. His level of damage is as much as the Peashooter. True to his name he attacks with his spores in short breaths, his shots traveling only small distances. They are available at cheap prices for the player to buy. On feeding plant food, he can fire 30 spores for two seconds.

The biggest advantage of this zombie is that it can swim and avoid all attacks by being submerged in pool water. It is equipped to proceed ahead in the submerged condition also. It can walk on its feet once it is out of the water. Only the Lobbed-shot plants are able to destroy them.

Due to his hard shell, the Wall-nut acts as a guard to all the other plants. The zombies are blocked on their way ahead by this nut and his counterpart, the Tall-Nut. The player uses this character when he needs time to plan a counter-attack on the zombies. When fed with plant food he gets a metal armor to cover himself. Initially, he has a smile on his face which converts to a frown as he is bitten by the zombies.

Dressed in a brown coat and shoes, the Pirate Zombie has the same powers as Basic Zombie and is its counterpart that appears in the game series called Pirate Seas. The Pirate zombie wears a bandana around his head just like pirates and lifts his leg while walking. The Pirate zombie has yellow teeth.

The logo again comes back here! But only the text part! The grey color portraying the ferocity of the zombies which want to chew off the brain of the players. The green color denotes everything natural and plants.

This character wears sports clothes and that’s why he is called Squash. The moment a zombie gets close to him, he jumps high in the air and smashes the zombie in no time – that’s another reason for naming him so. He belongs to the gourd family. When fed with plant food Squash can smash two zombies before going back to his normal form

The Repeater is an extension of the Peashooter but with double his powers. It shoots 2 peas at one go and each pea is worth two normal damages. Its damages are the same as Gatling Pea’s shots. He is capable of recharging himself very fast. The Repeater in his heart longs for love.

The second in line defense for the player is the Sunflower. Her design is based on the natural sunflower and her power lies in producing the sun. She loves to dance to the Earth’s natural rhythm that only she can hear. The player needs to plant lots of sunflower plants to take benefit from the sun. Once fed with plant food, the Sunflower is able to produce 150 suns instantaneously.

These are the first level zombies that a player will encounter as he starts the game. They are not equipped with any weapon or special traveling abilities. These units first lose their left arm on getting hit by 5 normal damage shots. At the tenth shot, they are killed and their brain falls off the body.