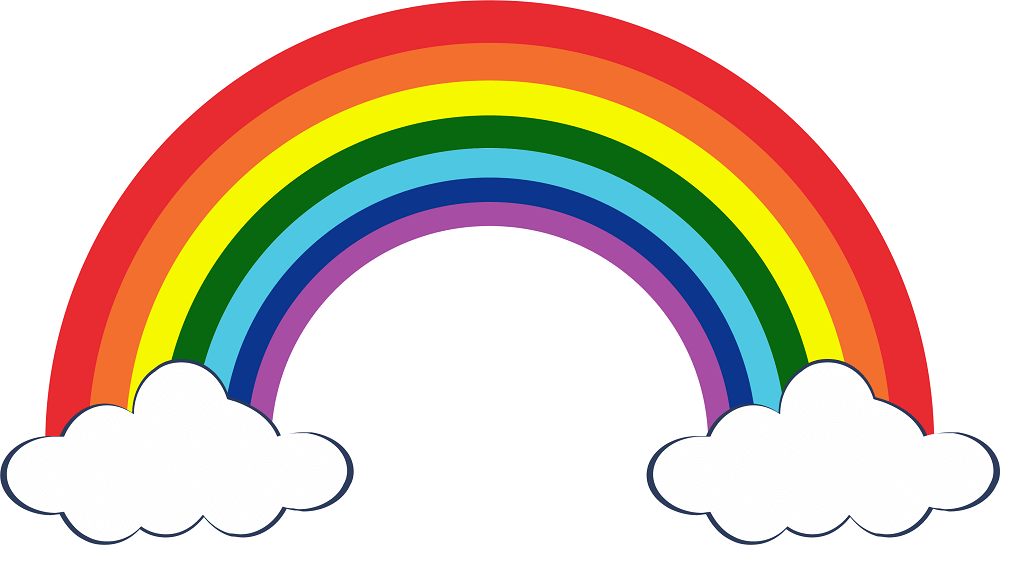 The world looks so bright and joyous in colors. Something colorful almost always makes us happy. Today’s topic of printable collection of coloring pages is inspired by one such colorful albeit natural occurrence. Hint: the colors fill the sky after rain. Yes, you have correctly guessed the answer. We are talking about rainbows.

Rainbow is an arc of colors visible across the sky through falling rain or shortly after. The white light of the sun gets refracted as it enters the water droplet and splits into the multiple colors that get reflected back. While there’s no clarity but the color patterns can be seen as per the acronym VIBGYOR – violet on the inside, indigo, blue, green, yellow, orange, and red on the outside.

While rainbows look like a semi-circle stretching across the sky, they are actually round like a circle. We aren’t able to see it from the ground, but the colorful circle can be visible from a flying airplane. It’s time now to check out more about the rainbows through this collection of rainbow coloring pages to print. 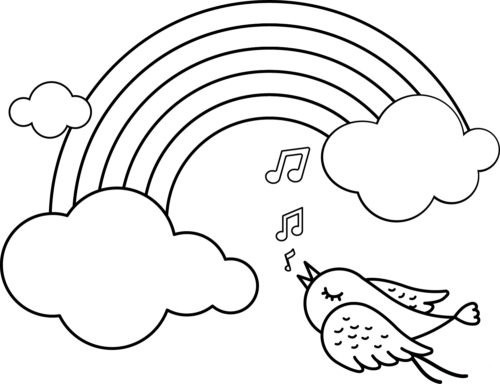 Like the birds chirping in the morning heralds the start of the day, we are starting off today’s collection with a bird singing. Looks like this bird loves rainbows as much as we do. Be sure to fill in all the colorful details. 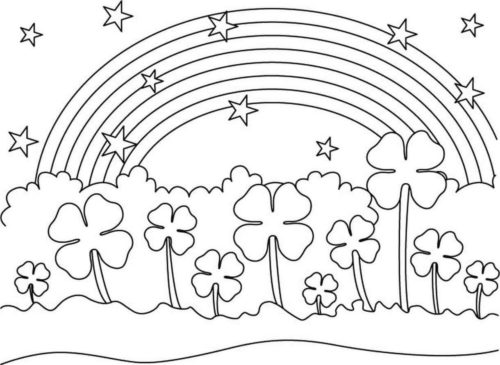 There’s a lot of luck and beautiful things on this coloring page. You have a field full of clovers, not just any clover but four-leaf clovers which are believed to be signs of good luck. There’s also the giant rainbow, sparkling across the sky.

A serene and calm scene awaits you on this coloring page. The greeneries, the lake, the sun shining and of course, the colorful rainbow adorning the sky. Download this coloring picture and bring out its beauty with your coloring skills. 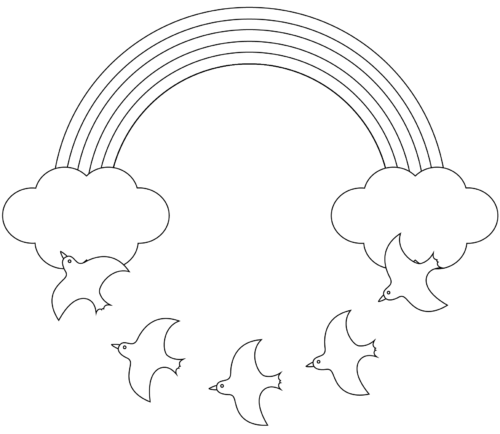 Did you know that rainbows will always appear opposite the Sun? This happens for the rainbows that are caused by sunlight. We have another shiny rainbow on this coloring page. This time it’s accompanied by a flock of birds flying in a row, among the clouds. 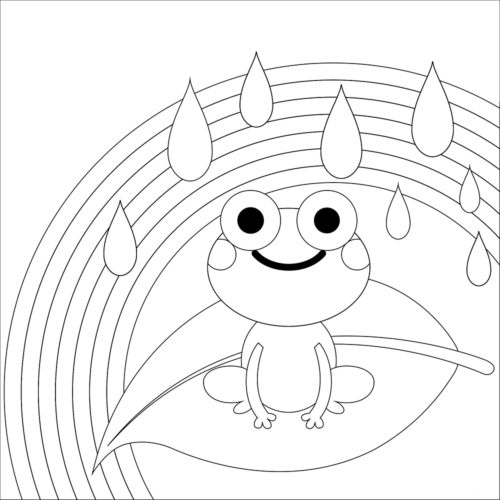 When there’s a storm and it’s raining you might have heard frogs croaking, especially if you lived in the countryside. Not always but most often you will find rainbows after storms. In the pleasant countryside, this frog is witnessing the appearance of a rainbow as the rain starts to subside and the sun starts to shine. 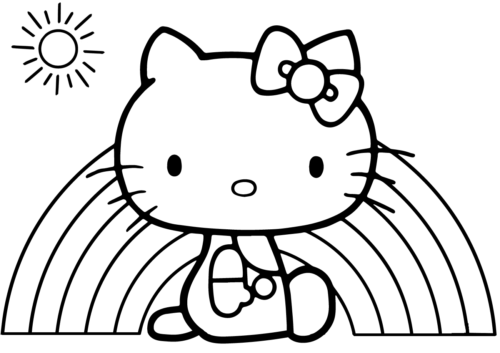 Just like the frog, there’s someone else who is super-happy to see the brilliant rainbow. It’s Hello Kitty, sitting pretty by a rainbow. There’s a warm sun shining in the background. Print this coloring page and fill it with vibrant details. 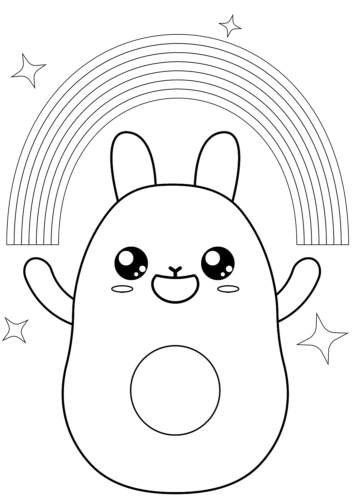 If you’re familiar with Japanese anime and the popular Japanese culture, then you will definitely know about Kawaii. The Japanese culture celebrates cuteness or the quality of being cute. Here we have a Kawaii creature stretching its hands like it is spreading the rainbow overhead. Fill this interesting illustration with lively colors. 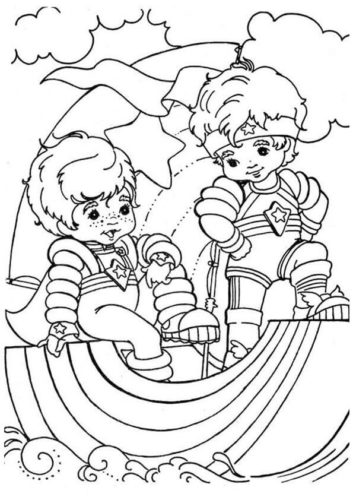 Wouldn’t it be so much fun if you could hang out on or slide down a rainbow? This illustration showcases how enjoyable it can be. Look at the little boy and girl having a fun time playing on a rainbow. Fill this coloring page with playful colors. 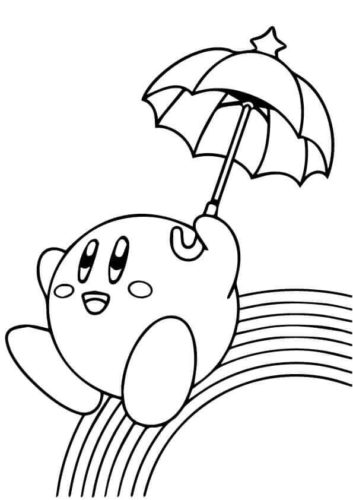 Watching the kids having fun on the rainbow seems to have inspired Kirby, Nintendo’s famous young, pink alien. To add a sense of adventure to his playtime, Kirby is carrying an umbrella while sliding down the rainbow. But it’s not an earthly rainbow. It’s a rainbow on the Planet Popstar where Kirby lives. 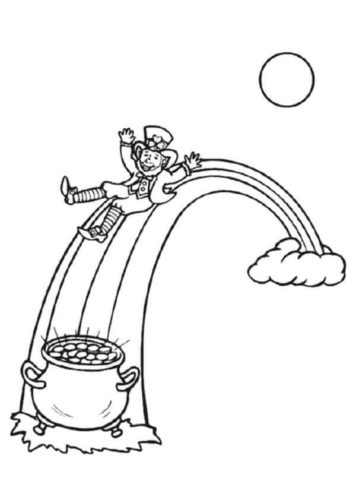 From Kirby’s alien home planet, we are back now to earth. Ireland to be precise. One of the enduring Irish folklore creatures is illustrated here on this coloring page. It’s the supernatural and solitary creature, always seen wearing a coat and a hat as well as sporting a beard – the leprechaun. The creature is known to hide his gold in the pot of treasure at the end of the rainbow. 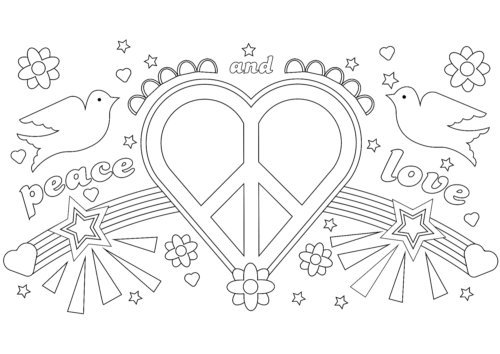 Isn’t this an artistically interpreted illustration of a rainbow? The creative design symbolizes peace and love, presenting them as the qualities invoked by the rainbow. There are other signs and symbols as well, like the flying doves, peace sign, and the heart-shaped design in the middle. 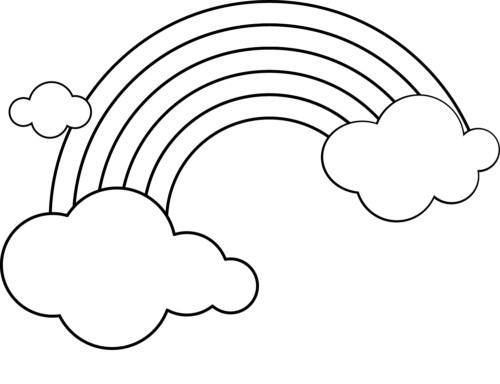 After that artistic illustration, here we have a simple and easy sketch for you to color. If you are new to coloring, then this should be easy for you. Print this coloring page and start filling in the colors. Give proper shades of grey for the clouds and fill the rainbow with an array of colors. 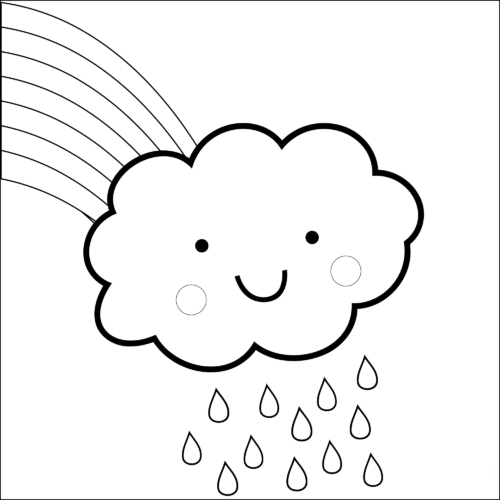 Here we have a Kawaii cloud drizzling lightly while the rainbow shines in the back. Look at the cute face of the cloud! This looks so adorable, doesn’t it? Be sure to give this illustration some fun and cute colors. 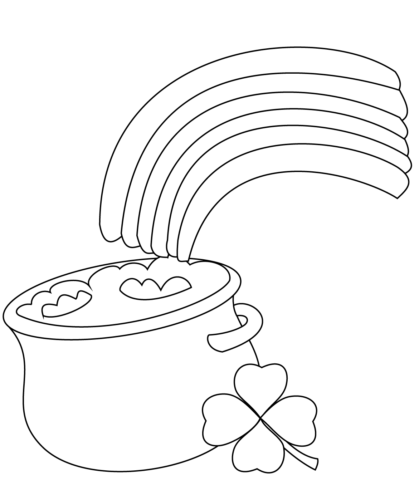 Let’s take a closer look at the pot of gold or treasure, according to legends, especially those pertaining to the Leprechaun. Tying into the legend is the illustration of the four-leaf clover, believed to bring good luck to those who find it. This is certainly a huge pot of gold. 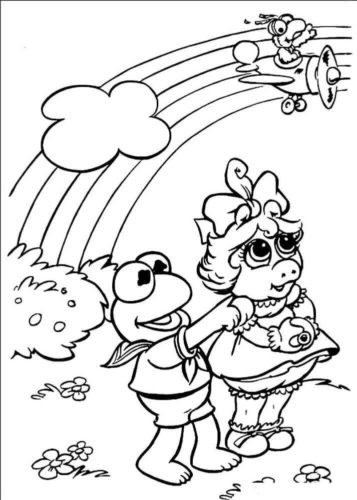 Sunny sky after rain and a bright rainbow. It’s certainly a beautiful day on the Muppet Show today. Created by Jim Henson, the show features The Muppets, which are actually specially created puppets. Look at the blossoming romance of Kermit the Frog, the showrunner, and Miss Piggy, one of the stars of the show. 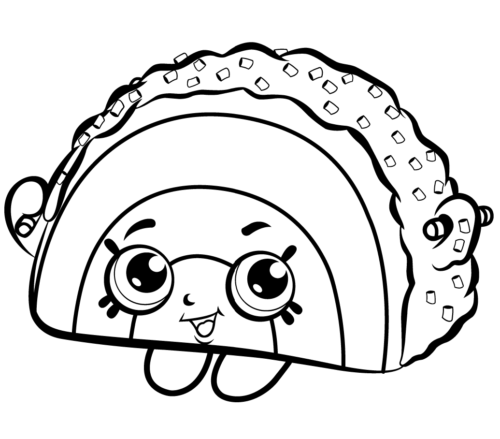 Grocery store items may look boring. But they can be fun and exciting too. Moose Toys manufactures a range of collectible toys named Shopkins, inspired by the mundane grocery items, turning them into fun little playthings. Here we have Rainbow Bite, a rainbow-colored slice of bundt cake, smiling wide on this coloring page.

Visiting a children’s park can be heaven for kids. Do you prefer the swings or see-saw? Maybe you are like this carefree bunch of Care Bears who likes the slides. Look at these bears sliding down on a giant, colorful rainbow! Print this page and fill it with lively colors. 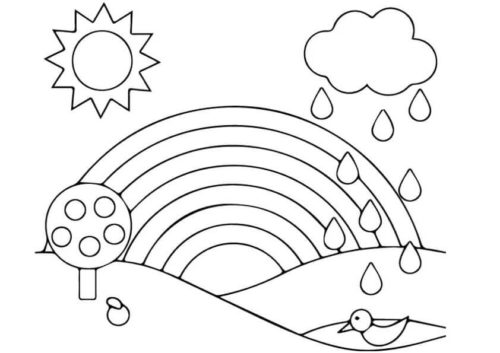 This coloring page is perfect for preschoolers. On this simple illustration, we have all the elements required for a rainbow – clouds, rain, and sun. The scenic picture looks very inviting, doesn’t it? Fill it with colors to bring out the brilliance of the illustration. 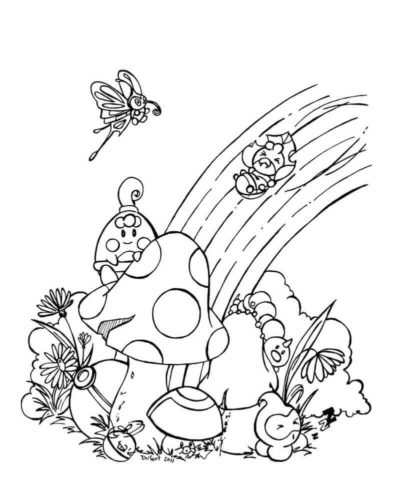 Resembling little umbrellas, the mushrooms look like adorable, cute, little things. This illustration showcases a bountiful forest full of mushrooms, incredible birds, and the magnificent rainbow in the background. You can identify all the things on this coloring page as you fill in colorful details. 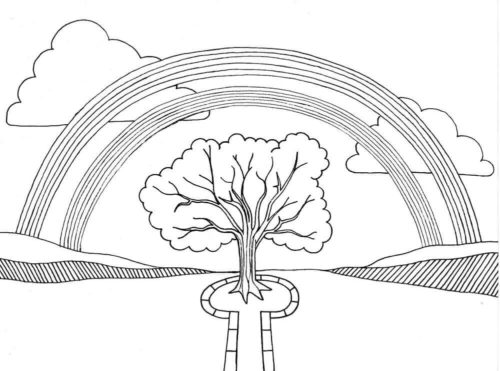 This stunningly designed garden has a glorious tree at the center with a clear path. As the rain subsides, you can see the wondrous rainbow stretched over the huge tree to create this impressive illustration. Be inspired by this drawing and fill it with marvelous colors. 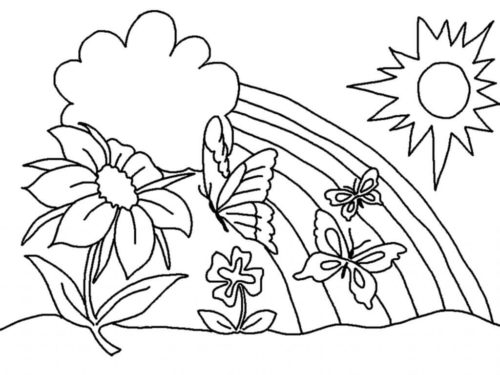 While the rainbow has seven colors, there are several other colorful things in the world. Like this bunch of flowers and the butterflies hovering over them. Print this page and add the colors to bring the scene alive. 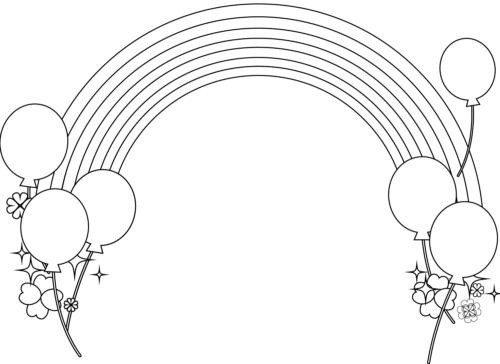 Would you like some rainbow in your room? You can turn this illustration into a spectacular poster. What’s more? There are even quite a few balloons. When you color the balloons, make sure to color each with a different color of the rainbow.

We are entering the world of My Little Pony (MLP), a toy line developed by Hasbro in 1981. The line, revamped several times, features little ponies with colorful bodies and unique symbols. On this coloring page, we have the colorful ponies rivaling the vibrant colors of the rainbow. 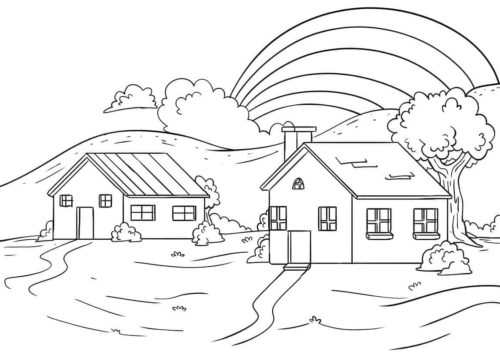 Rainbows always come as a pleasant surprise. When you are going about your daily life, seeing a rainbow can lift up your spirit. Like this idyllic countryside scene on this coloring page, and a rainbow spreading wide over the houses, above the hills. Print this page and fill this amazing scene with your coloring skills. 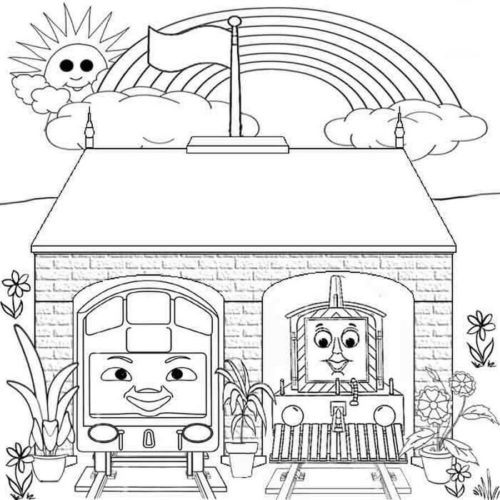 From the rainbow over the countryside, we now move on to a rainbow over a famous place of Thomas & Friends, a British television series. As you can see, the series deals with the adventures of a group of locomotives and other vehicles, which in turn is based on the book titled The Railway Series by Wilbert Awdry and his son Christopher. 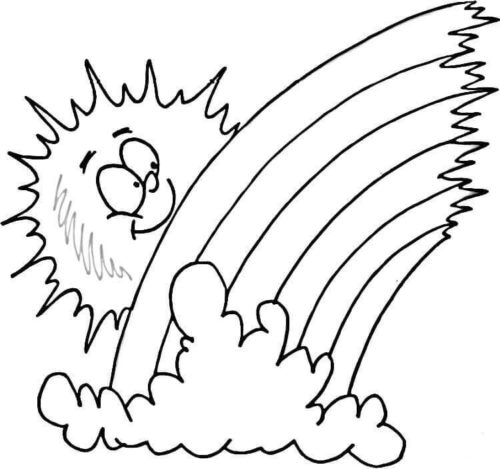 This one is a bit whimsical illustration of a rainbow. The sun seems to be in a jolly mood playing hide and seek behind the rainbow and the cloud. Bring out the details of this fun illustration with your coloring skills. 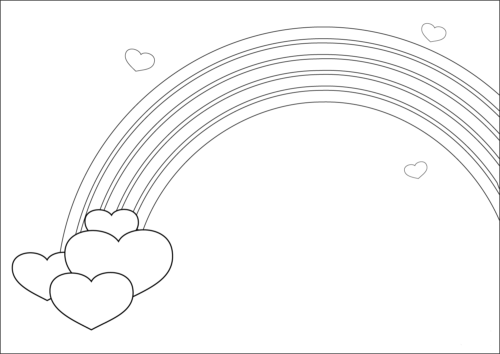 It’s time now for some love. It’s not just any love but rainbow love. Look at those loving bunch of hearts at the end of the rainbow. While you color the rainbow in varied shades, you can think about all the lovely things in your life. 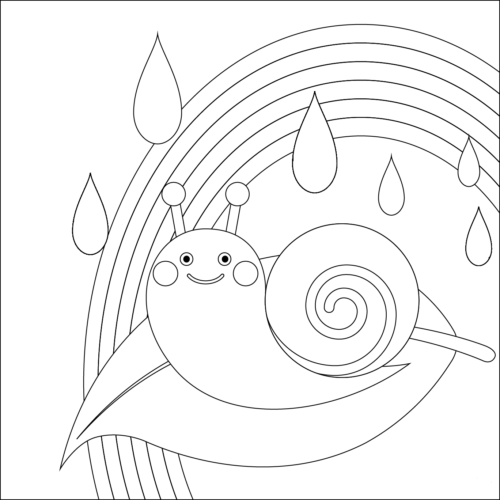 Among some of the creatures that are known for their slow movement is a snail. This one is set for a rest on a leaf, as the light rain continues to fall. Look at that cute little expression. It seems to be enjoying the bright and colorful rainbow. Give each element on this coloring page your best coloring skills. 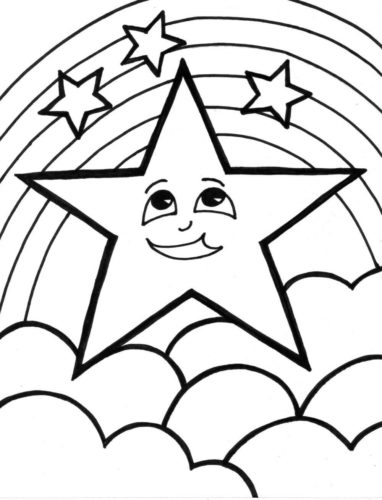 While it’s not really possible, but imagination is a great thing. With imagination, this illustration has brought together the stars of the night and the shiny rainbow together on the night sky, above the fluffy clouds. Be sure to use your imagination when you fill in the colors in this creative illustration. 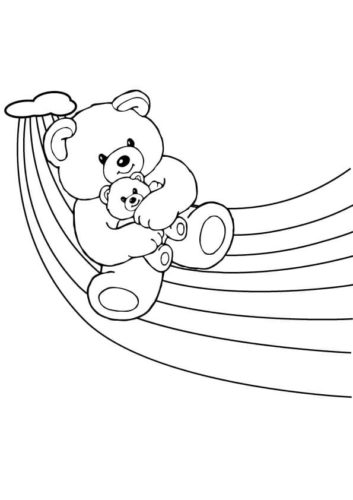 This soft and cuddly teddy bear seems to have taken inspiration from the other Care Bears who were sliding down the rainbow. As big as he is, he is able to carefully ride down the gigantic rainbow slide. You too can be careful to color within the lines on this coloring page. 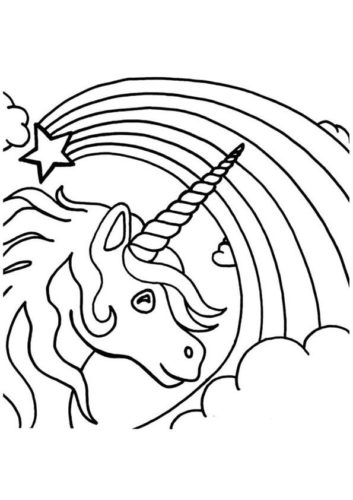 On that pure note, we have reached the end of this interesting and joyful collection of rainbow coloring sheets. Hope you were smiling all the way through while coloring these rainbow inspired coloring pictures. If you want more rainbows, be sure to look out for the double rainbows in the sky. Yes, double rainbows are also a natural phenomenon. They happen when the light gets reflected twice, creating a second arc which is always seen outside the first or primary rainbow arc. However, unlike the order of colors in the primary rainbow, the second rainbow arc has a reversed order with violet on the outside and red on the outside.