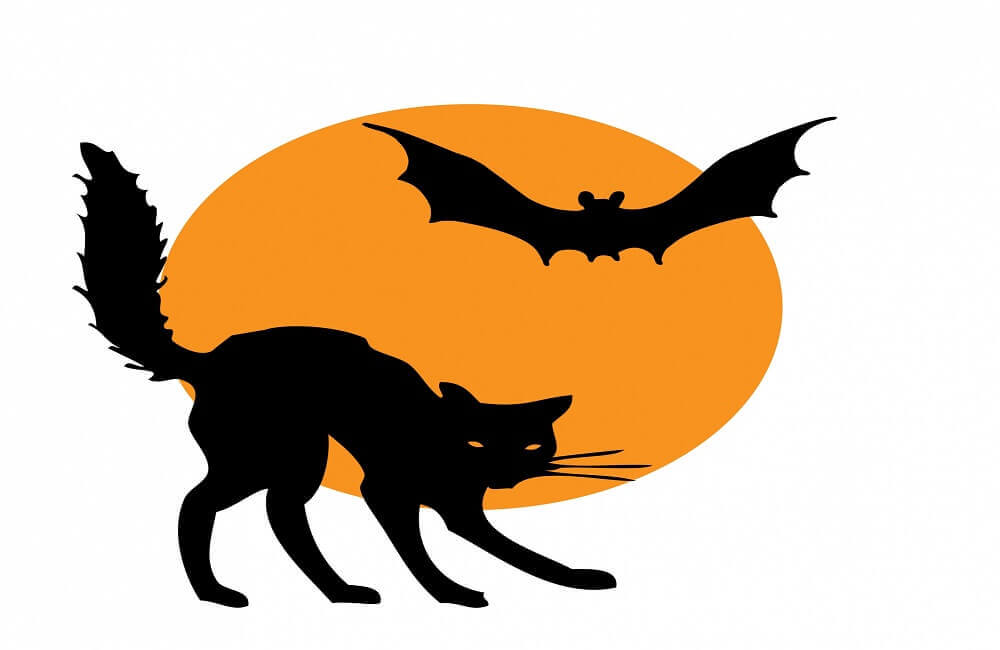 It’s Autumn season, and we are soon getting to the scary part of the year. If you have a timid heart and are unable to watch or see anything remotely connected to horror, this might not be the best collection for you. We are stepping into a thrilling and terrifying world with scary Halloween coloring pages.

Halloween falls on the last day of October each year and observed as a day to remember our ancestors and all those who have departed. Often written as Hallowe’en, the festival is also referred to as Allhalloween or the eve of All Hallows’ Day.

From its Celtic origin to the adaptation as a Christian celebration, over the years, Halloween has gained much popularity around the world, becoming one of the most known holidays. Through popular culture, Halloween is now marked with traditions like Jack-O’-Lanterns or carving of pumpkins into lanterns, dressing up as scary or popular characters, and trick or treat, where children head over to houses to get treats.

So take a deep breath and prepare yourself as we start this frightening ride through this printable collection of scary Halloween coloring sheets. 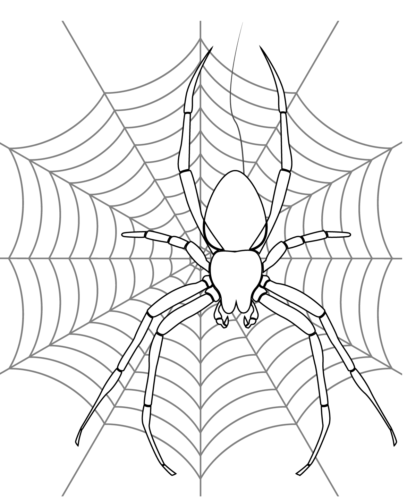 While a small spider you see around your house might not look too scary, but here we have a huge spider. With those long, creepy legs and large body, doesn’t this spider look terrifying? Print this coloring page and be sure to give this scary creature some of your spooky colors. 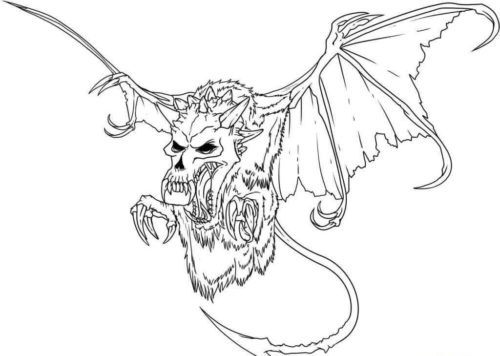 We have upped the scary game with this next illustration. Here we have a horrifying looking bat. But it’s not just any other bat. This particular bat is made up of only a skeleton. Look at that dreadful skull with an open jaw and long pointed tail. This simply gives you the chills, doesn’t it? Further, accentuate its scariness with your coloring skills. 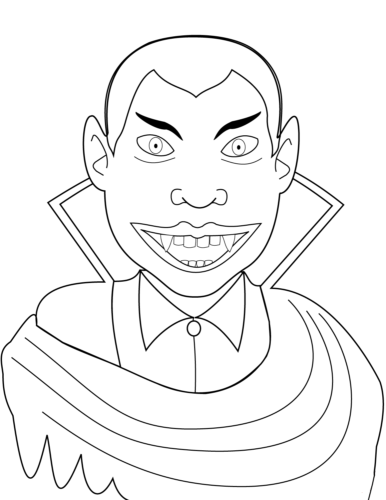 When it comes to scary things, no one comes close to the height of popularity and notoriety achieved by this character – Count Dracula. We first met him as the lead character of the 1897’s horror book, “Dracula”, about a vampire. Wearing a cape and with a devilish grin, this illustration showcases the playfully frightful side of Count Dracula. 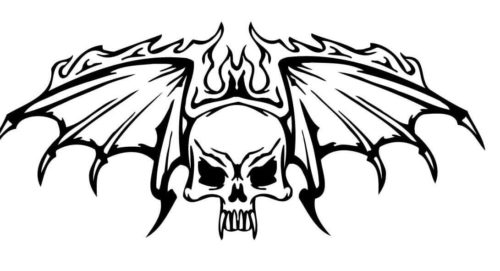 Combining the elements of gothic design and horror elements, here we have a skull with wings that is full of fire. Give this illustration some dark colors for the skull and the wings, but make sure to brighten the fiery part with the colors of fire. 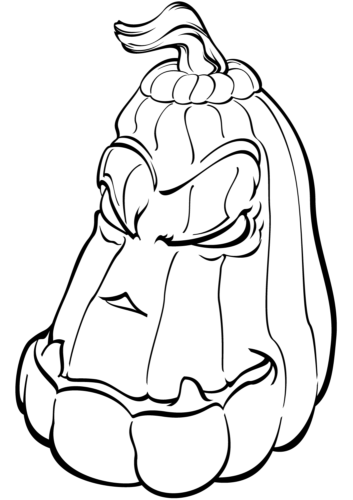 This might stop you from ever eating a squash dish again. Keeping with the Halloween theme, somebody seems to have carefully carved out this squash to create a creepy personality. Look at those teeth and glaring eyes! Quickly fill the colors on this illustration before it gets scarier. 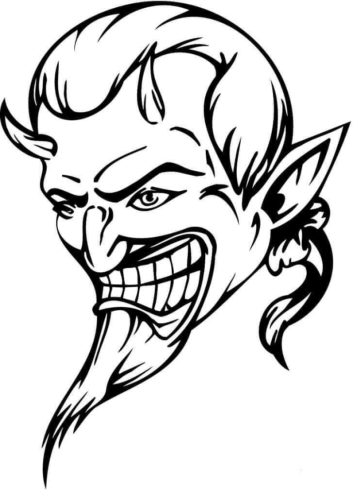 Baring all his teeth in anger, here is an illustration of a devil trying to create fear in the mind of whoever sees him. The long hair, the horns on his head, and pointed ears accentuate the devilish character. With your coloring skills, you can make him even eviler.

Is it a woman? Is it a bat? It’s a female vampire in a bat avatar! Combining the abilities of the nocturnal creature with the powers of a vampire, this illustration features the female vampire in the form of a bat, looking strong and invincible. 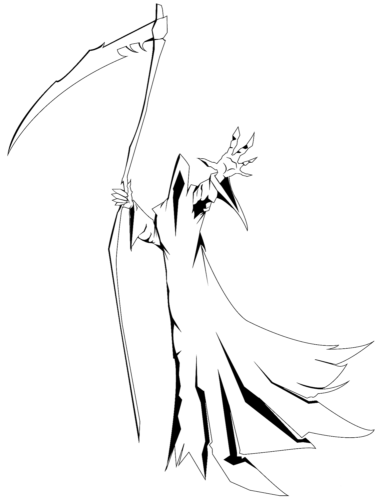 All the horror tales come with the warning of the creature that can cause death. The harbinger of death, popularized in several mythologies around the world, Grim Reaper is a grim cloaked figure in black. As illustrated here, you can see the Grim Reaper carrying its weapon – the scythe – to collect the soul of the living. 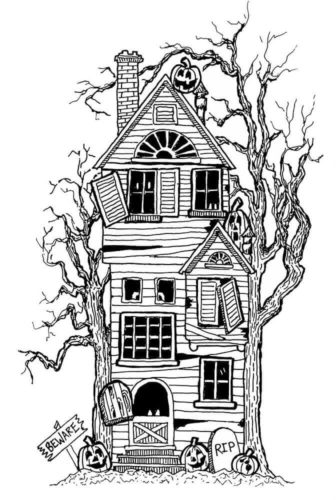 If you have read stories or seen movies about haunted houses, then just looking at this illustration you can easily tell how ghostly this house looks. From the leafless branches protruding from every corner of the house to the broken windows, from the “RIP” signs to the creepy Jack-O’-Lanterns, add to the eeriness of this house with your colors. 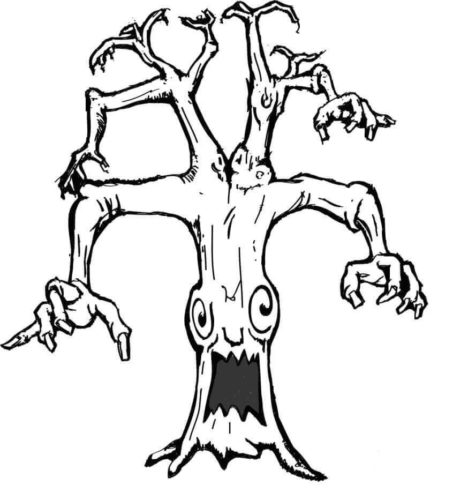 When it’s dark and everything goes quiet, the haunted things around the world comes alive. Just like this haunted tree, turning its branches into multiple hands ready to pounce on an innocent soul passing by. It has turned its large trunk into an open mouth to gulp down the victims. 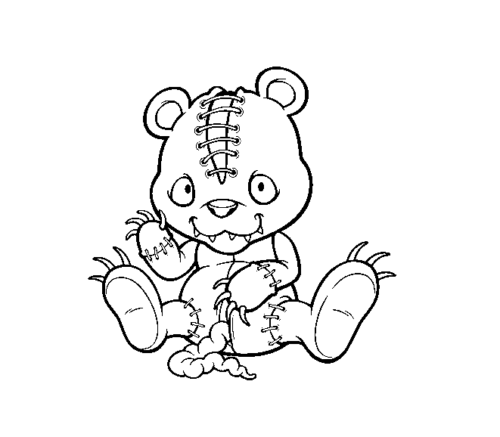 Stitched up in different places and its gut cut open, this teddy bear is nothing like the other warm and fuzzy soft toys. It looks horrific, doesn’t it? Print this scary Halloween coloring page and give this horror-filled teddy bear some frightful colors. 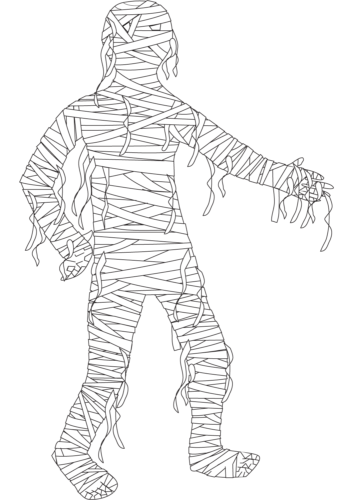 The process of preserving the dead bodies during the ancient times, be it the rulers of the Egyptians or anywhere else, is known as mummification and the preserved dead body is referred to as mummy. Here, we have a mummy woken up, the bandages unraveling, searching for the culprit. 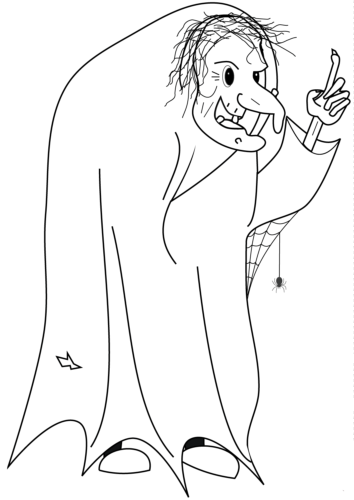 When there’s a fairy tale, there’s almost always an evil old witch ruining the happy plans of the lead characters. We have one of the examples of the old witch here on this coloring page. Looks every bit evil, doesn’t she? Give this devilish illustration your best coloring skills. 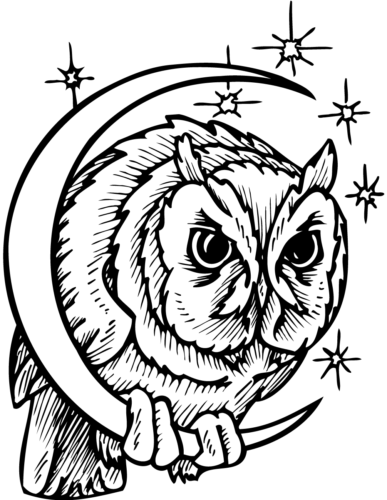 Owls are nocturnal birds, active during the night. So, it’s not surprising to see an owl being awake at night. But there’s something creepy about this particular owl. As if it’s been put under an evil spell. 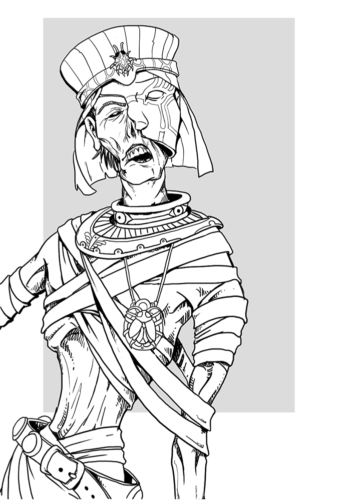 Unlike the Hollywoodish mummy we colored earlier, this illustration showcases a realistic sketch of a mummy, as one might find in a coffin. Mummies were buried with their prized possessions like their jewels, as can be seen here. Print this coloring page and give it realistic colors. 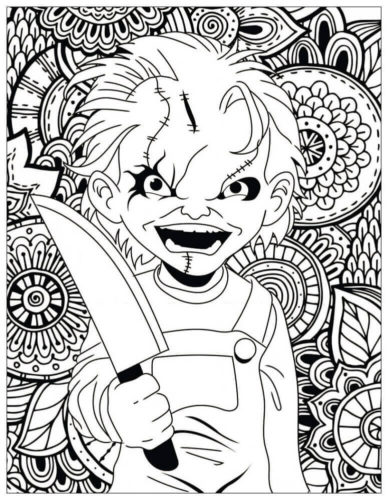 One of the iconic horror characters in fiction is Chucky, who was first seen in the movie Child’s Play. A disfigured, rag doll with an evil streak, Chucky is easily recognizable. Just look at this illustration, anybody who sees Chucky once, is bound to remember him. To make him more memorable, fill this coloring page with scary color combinations. 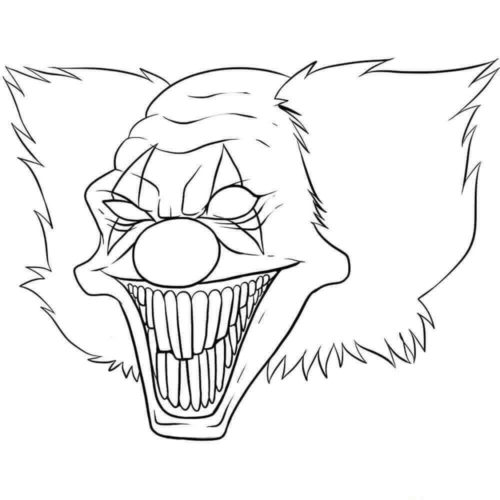 If Chucky looked scary to you, then this close-up of a clown will be terrifying for you. While clowns have usually been associated with laughter, they can also be figures of horror and fear as depicted in several movies. This surely looks menacing, to say the least. 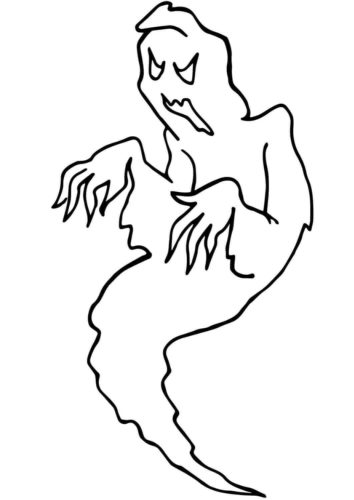 You might find someone or the other, dressing up as ghosts in complete white costume during Halloween. Although, it won’t be anything like this illustration that has no lower body. Give this coloring page the right combination of spooky colors. 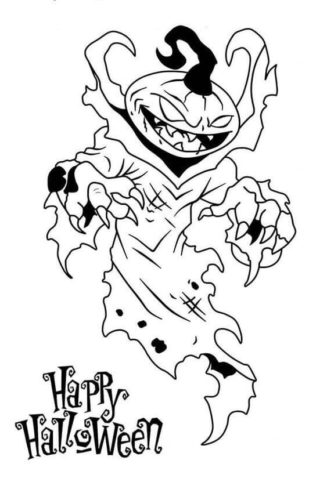 Here’s somebody who is all set and ready to wish you a Happy Halloween. This is the ghostly spirit of the popular Jack-O’-Lantern delivering all the best wishes for a Scary Halloween this year. Fill this happy Halloween wishes with a lot of scary-looking colors.

Beware! We are now entering a scary Halloween scene on this coloring page. The bats flying around have almost covered the entire night sky. Looking ferociously frightful and ready to attack the mortals on the ground. Print this coloring page and fill it with dark and dangerous colors. 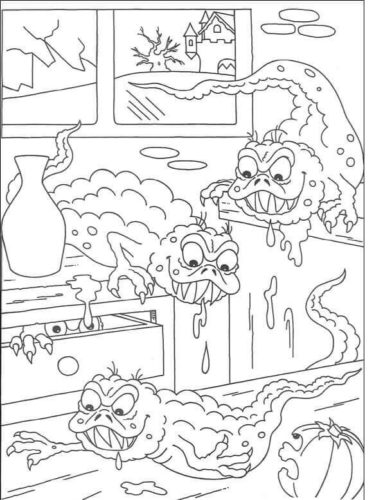 From the numerous bats flying and filling up the night sky, we are now witnessing a group of Jack-O’-Lanterns attacking houses. Leaving a trail of slime behind them, these horrid Jack-O’-Lanterns are searching every corner of the house, hunting for humans. Give this scary Halloween hunt, elements of horror and danger with your coloring skills. 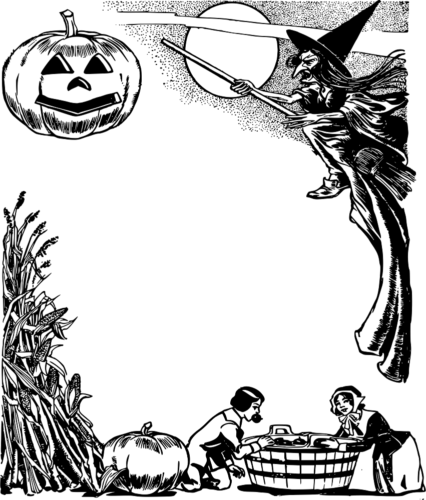 Playing games on their Halloween night, these two humans are completely oblivious to the scary witch and Jack-O’-Lantern flying overhead. It’s a fun game of trying to pick out apples from a water-filled barrel using only their mouths. Requiring such concentration from its players, it’s no wonder they didn’t see them flying. 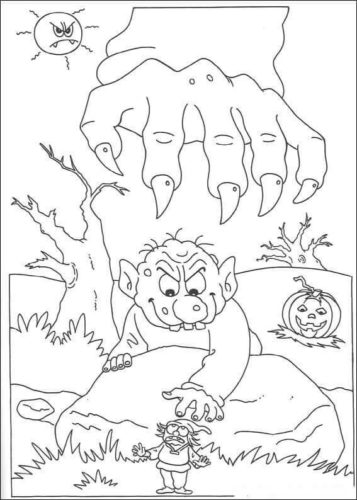 Out in the field for a survey of his land, this man had no idea there was a giant ghostly creature waiting for him. Seems like he had forgotten it was Halloween and ventured out in the open, all alone. But look at those giant fingers. It’s an even bigger monster trying to catch the creature. 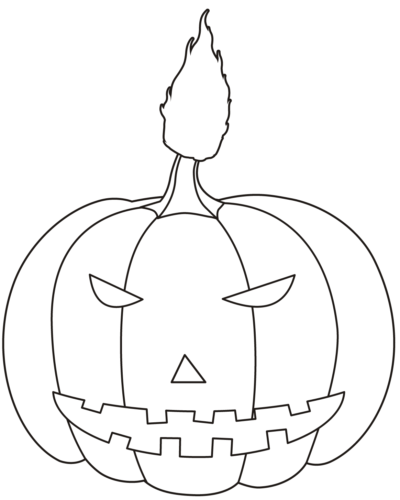 Somebody has carved the pumpkin expertly. One look at this Jack-O’-Lantern and you can feel the creepiness exuding from its facial expression. From the shape of the eyes and the skillfully carved out teeth, enjoy your time filling this sinister-looking Jack-O’-Lantern with different shades of fearsome colors.

If you are looking for a unique costume to pull off for this year’s Halloween, maybe you can try out the Snake Man. With the upper body of a man and a lower half of a snake, here is Snake Man, slithering its way. Of course, you will need a cut-out for your feet in order to be able to walk. 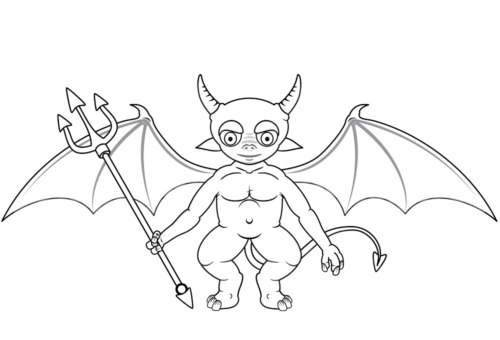 On the lookout for souls to snatch and carry back to Hell, here comes the Devil flying, carrying his trident. With batwings, pointed tail, and horns on his head, the Devil is searching with extreme greediness to prey on unsuspecting human souls. 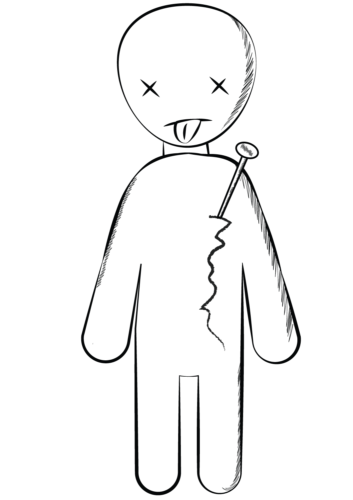 In the world of magic, especially black magic, Voodoo dolls hold special powers. Prevalent as part of magical traditions in several cultures around the world, the process involves using a doll or an effigy as illustrated on this coloring page and sticking pins into different parts. It is believed that whoever the doll represents can feel real pain in those parts. 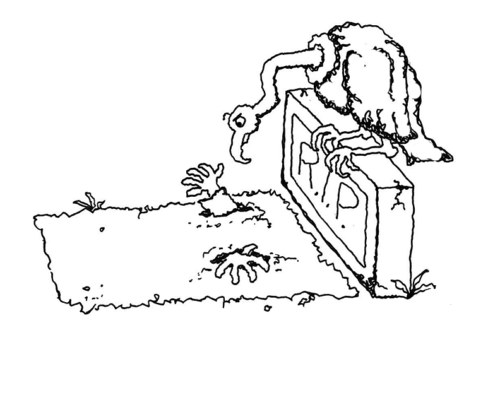 Vultures are birds that have a bad reputation because they feed on carcasses. Here we have a curious vulture perched on a tombstone, intently observing the rise of a zombie from its grave. Zombies are what is believed to be undead creatures in the world of fiction. 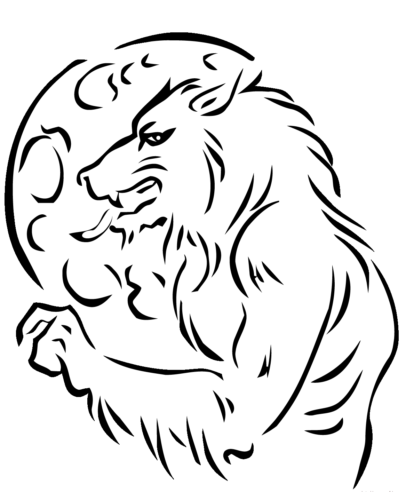 In folklore, werewolves are actually humans, except for one thing. When there’s a full moon night, they can transform into a wolf, becoming a combination of wolf and human. Legend has it that it can happen by choice or under a curse. 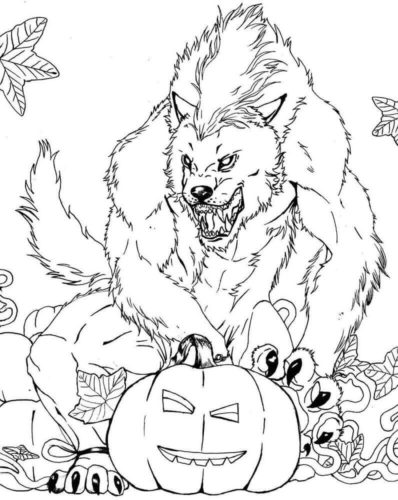 If it’s a full moon on a Halloween night, then there will be lots of trouble. Here we have an instance of one such full moon Halloween night. This giant werewolf is on the prowl, picking up the scents of his prey. 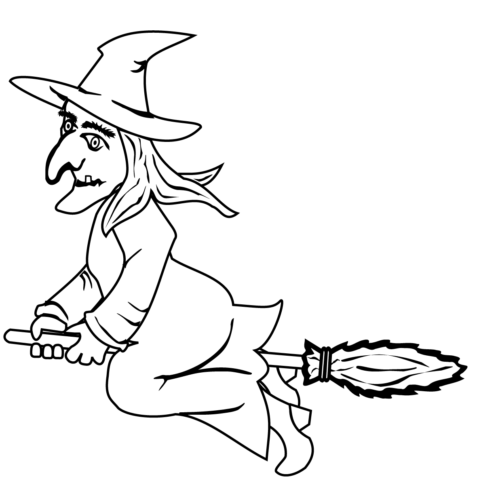 While werewolves hunt on the ground, the witches fly on their broomsticks to see the bird’s eye view of what’s happening. Seems like this witch has spotted something interesting. You can imagine what it is while coloring this illustration. 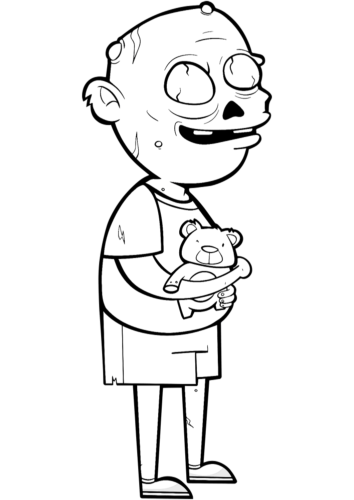 Having died young, this boy has now become a zombie and it is still holding on to his teddy. Give this fictional creature, some of your real coloring skills.

With that zombie illustration, we are now out of all the scary things in this terrifying printable collection of scary Halloween coloring pictures. Hope this collection gave you some inspiration for your Halloween celebration this year, at the end of October. Be sure to actively participate in helping your family, whether it’s making treats, designing costumes, or decorating the house.