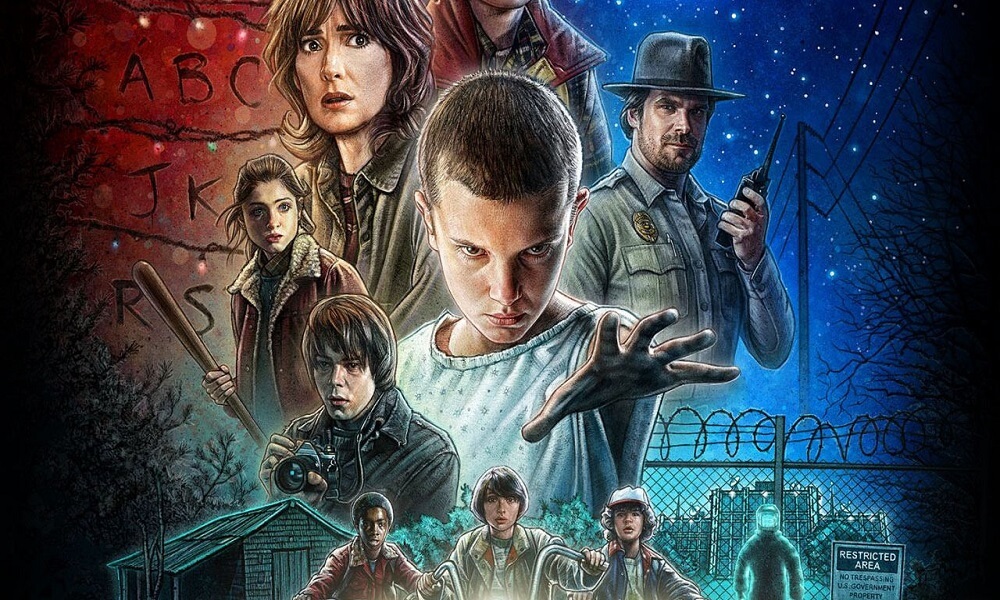 After “Game of Thrones” and “Breaking Bad”, one series that has got me hooked is “Stranger Things”. Set in the fictional town Hawkins in Indiana, this science fiction-horror web series begins with the disappearance of a young boy and all the supernatural and paranormal events that occur with it. A girl with psychokinetic abilities, named Eleven, comes forward to help the friends of Will, the missing boy, search for him. Since the series is so popular, even with kids, it was quite apparent people would be looking for its coloring pages too. To cater to your demands, we’ve got a list of free printable Stranger Things coloring pages for you. So check out our compilation of Stranger Things coloring sheets for you. Take a look.

This coloring page comprises of the entire cast of “Stranger Things” along with the name of the series written in the middle. If you are a die-hard fan of this series, you can easily write down the names of all these characters below their images. It will make a fun Stranger Things activities too!

Here’s another Stranger Things characters coloring page featuring the core characters of this movie, which includes Mike, Dustin, and Lucas, and of course, Eleven. It seems that Eleven is showing the guys one of her powers and they are terrified.

Here’s a coloring page of Jane Hopper or Eleven, one of the protagonists of this series. When Eleven was a child, she was kidnapped and experimented in the Hawkins National Laboratory for her inherited psychokinetic abilities. She was found by Mike, Dustin, and Lucas after she escaped from the lab.

Here’s another interesting Stranger Things coloring page for you to print out. It features Eleven eating waffles, along with Dustin, Mike, and Lucas. But who’s the other guy? Is it Will or his elder brother Jonathan? Can you tell us?

This coloring page features the ferocious and mysterious Eleven with Dustin, Mike, Will, and Lucas. The image is very intricate, so we’d suggest you use a pencil color or felt pen for coloring the images of the characters. You can use crayons for the name.

Here’s a coloring page of the Demogorgon from the “Stranger Things” series. The Demogorgon was a predatory creature, originating from the parallel dimension named Upside Down. The character terrorized Hawkins for over a week but was ultimately defeated by Eleven.

This is one of the trippy coloring pages we’ve seen in recent times. It features Eleven wearing the virtual reality headset and has transported herself to an entirely new world. The circles would look a bit intimidating at first, but you’ll enjoy filling it.

Here’s a Stranger Things season 2 coloring page, as all the characters are a bit grown up. This season itself is fascinating, so you’ll enjoy filling this image too.

Here’s a coloring page of Dustin with Lucas, Will, and Mike. The guys are looking a bit baffled. What could be the reason?