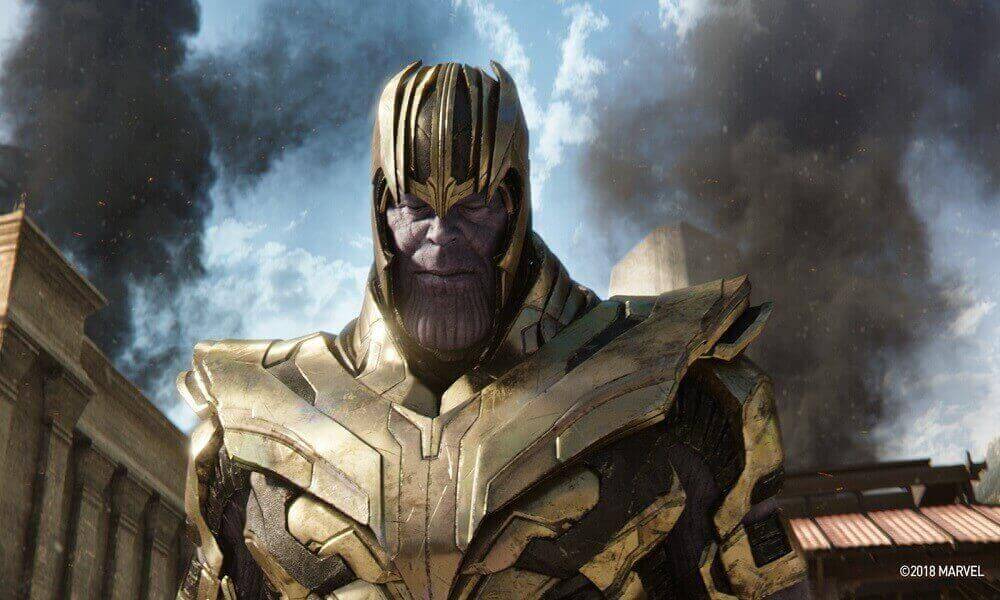 Hello, young readers! Are you ready for free printable Thanos coloring pages? Thanos first appeared in the Marvel comic, The Invincible Iron Man. Since then he has been a favorite and is probably the villain with the largest fan following in the world. Writer-editor Jim Starlin sketched Thanos and approached the then Marvel editor, Roy Thomas. The initial Thanos looked nothing like his present form and it was on Roy’s suggestion that Starlin beefed him up. Starlin took a liking to it and Thanos kept growing by the day to reach his current form.

Thanos was born on Titan, the moon of Saturn where the warrior races dwell. He himself is an Eternal and also possesses the Deviant gene, which only empowers him further. Thanos was docile as a kid and would only play with his brother, Starfox who later became the Eros of Titan. It is in his teenage that Thanos came across concepts of Nihilism and mass annihilation and started using his scientific capabilities to make himself stronger. He became so obsessed with death that he fell in love with the physical embodiment of it, Mistress Death. Below is a series of free Thanos coloring sheets to print for you to pay your homage to the great philosopher-villain, Thanos.

Here is one of the quirkiest of Marvel characters, Deadpool, on Thanos’ back. In fact, he is referred to as Marvel’s hero-villain. The sheer ratio of their sizes, however, gives us a fair idea of what Thanos is capable of. Since it took the entire Avengers to tackle him, you can wonder how much damage Deadpool can inflict. Color the deadly duo.

You are witnessing one of the greatest warriors of the universe. One, who is gifted with technology, possesses cosmic power and has been trained in hand to hand combat in Titan. Here is a small glimpse of how he is single-handedly destroying several other skilled villains. Color the war scene accordingly.

According to comic books, Thanos waged a war against Titan in its entirety. It is said that he did so to impress Mistress Death and in the process bombarded millions of his own race. Color the furious Thanos in all his rage.

Thanos has taken many strikes from gods, superheroes and villain alike. However, he stood strong through it all and ventured to any extent to impress the love of his life, Mistress Death. Color the valiant Thanos as he takes on and unleashes cosmic forces. 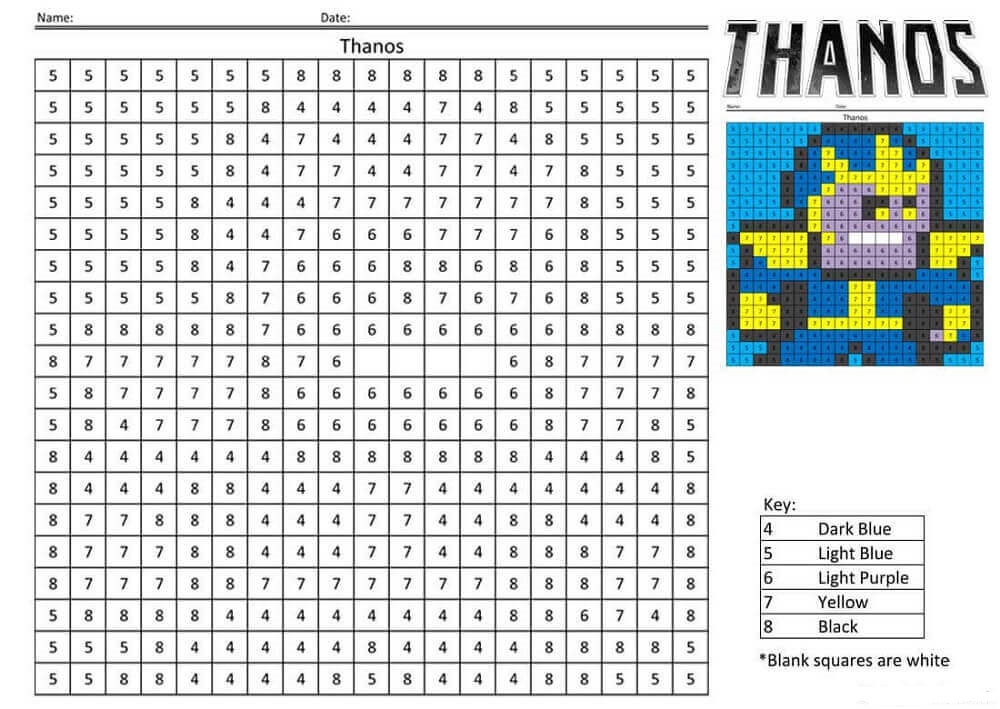 Color the numbers as per the instructions to conjure up the smartest and strongest super villain of recent times. Hail Thanos!

This is Thanos asserting this superiority by merely posing. His armor, even though one of the best in the universe is really unnecessary. Thanos has survived assaults from cosmic forces and even two thunderbolts from a god himself, Thor, all without his armor. In this sense, we can say that Thanos’ armor is more of a decoration than a requirement.

The comic version of Thanos is familiar to Marvel fans. His ideology of mass annihilation is not baseless even though outrageous. Color him up to look as menacing.

Thanos’ ultimate motive is to gain possession of the infinity gems, to become omnipotent. This shall empower him to wipe out half of the world’s population so that he can impress Mistress Death. Color the mightiest of Inhumans.

It is the Hulk, Batman, Wonder Woman, and Spider-Man lying all helpless in front of Thanos’ might. This can give us a fair idea of the amount of strength he possesses. Color the victorious warrior along with his trophies.

Often referred to as the Dark Lord, Thanos is the mightiest of Titans. He is immune to heat, cold, and all diseases. He can go indefinitely without food and water and also possess the skill of telepathy. It is in the quest for infinity stones that he led the two most infamous wars on Earth and Xandar in association with Loki and Ronan, The Accuser respectively. Color the mightiest of the Titans.

Thanos is a brooding, nihilist philosopher who believes in mass annihilation. He wants to wipe out half the world’s population as he believes that overpopulation is eventually going to deprive the universe of all its resources. To achieve this, he ventures into the quest for the infinity stones. Color the self-empowered Thanos.

Thanos forged various alliances over the years but none proved to be fruitful. Instead, it cost him the loyalty of his daughters and even one of the infinity stones. Hence, he waged a war single-handedly with the black order. Color him to suit his valor.

The infinity gauntlet was initially designed to hold six infinity stones. However, the Living Tribunal decided that the gauntlet would rest excess power at the hands of the individual owning it, hence it was decimated and the gems were scattered across the world. This is Thanos after having acquired it. Color the victorious Thanos.

Also referred to as the Mad Titan, Thanos is the best of his race. His rage gradually developed from his teen years and gave shape to the beast that we know today. Color him to suit the expression.

The end of “Avengers: Infinity War” shows Thanos watching the sunset in peace after accomplishing his mission. Thanos is a dark individual who has dedicated his life to a mission, even though it might be maniacal. Thanos thinks of himself as a messiah and wants to rid the universe of burden. Though he is not completely sane, Marvel fans know that his word has got a point to it. Wait for the next Avengers movie and brood with Thanos as you fill these Thanos coloring pages printable. Don’t forget to share your favorite Thanos coloring pictures with us.