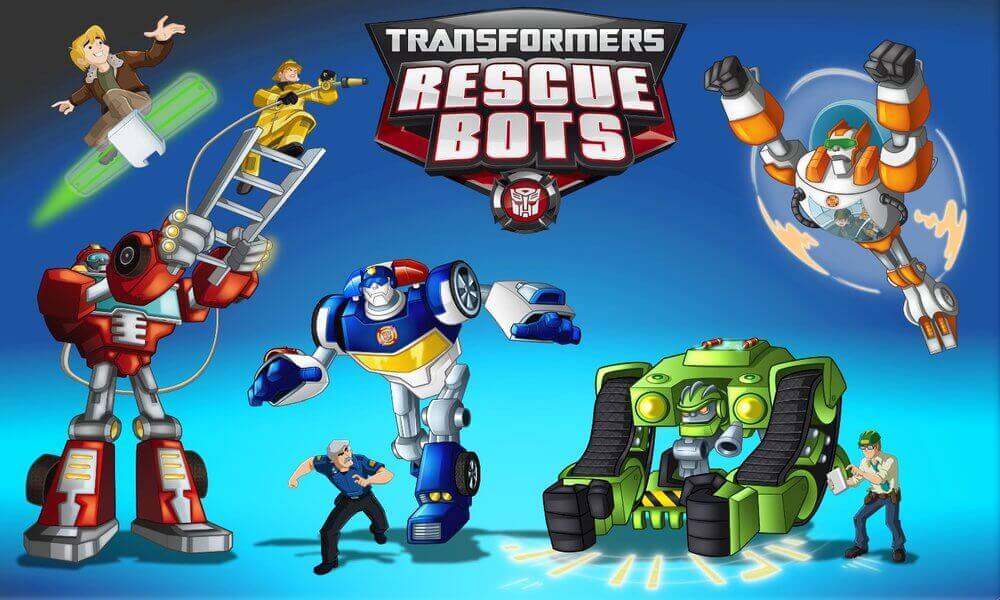 “Transformers: Rescue Bots”, better known as Rescue Bots is an animated television series and a story book series based on Hasbro’s Transformers. In this series, the Rescue Bots attempt to educate kids regarding safety and hazard. The series is loved immensely by children, which is why it’s a major hit. Not just the show, but it’s toyline is equally popular with the children. Keeping with the popularity, we’ve compiled a collection of printable Transformers Rescue Bots Coloring Pages. We’re sure you’ll find hard to stop yourself at just one Transformers Rescue Bots coloring sheet.

Here’s a coloring page of Blades, a Flight Bot and Copter Bot that transforms into an orange helicopter. He is a caring and emotional Bot, but is very scared of heights. He also enjoys taking part in the events and customs of the earth.

This coloring page features Boulder and Chase in their car forms. Boulder is busy in his work and Chase seems to be coming from behind. They both look very competitive right now. What could be the reason?

Meet Boulder, an autobot that transforms into a bulldozer. This coloring page shows Boulder in the bulldozer form. As a bulldozer, he uses his shovel to plow through as many materials as he can.

Boulder has three forms, dinosaur, robot and bulldozer and he nails every personification. This coloring page shows him in his original form, which is of a robot. In this form, Boulder sends out sonar pulses from his palms.

This coloring sheet features Bumblebee in the auto form, who usually appears in the series with Blades. It’s a yellow colored Robot with black and silver borders.

Here’s a coloring page of Chase, the Rescue Bot who transforms into a police car and stegosaurus. This coloring page shows Chase in his robot form, in which he has two spotlights in his forearms and can carry two passengers in his cabin.

Chase is indeed a hero and this Transformers Rescuebots coloring page displays it perfectly. Here we see Chase saving the life of a policeman. We wonder how things would have become if Chase wasn’t there to save him.

Meet Heatwave, the fire bot and the leader of the Rescue Bots. Kids will definitely enjoy filling colors in its fine lines. Being a Cybertronian, Heatwave can assume several forms, and here it’s in the form of his fire truck.

This coloring page features Optimus Prime, the leader of the Autobots. He was the one who sent Blades, Boulder, Chase and Heatwave to aid human beings. So we all must be thankful to him.

This handsome looking vehicle belongs to none other than Chase, the macho transformer rescue bot. In his vehicle, or rather police car mode, Chase is very swift agile, just like a race car. This helps him fight the baddies faster.

This is one of our favorites Transformers Rescue Bots coloring pages as it features four important characters in one frame. The coloring sheet includes Boulder, Blades, Chase and Heatwave. Give each of these characters their signature shades and see how beautiful they look.

Boulder is in some serious rage as it’s seen throwing Chase car on some other vehicle. Whose vehicle could it be?  Or is it a part of the group? Write the story on this coloring image as you fill colors.

Like we had mentioned before, Chase had valiantly saved a police from trouble and this coloring page shows how relieved the cop looks. The cop is also pointing towards something. What could it be?

In this coloring page, we see Chase and the cop paying their homage, while Boulder seems to be in a fun mood. Even the cop near Boulder is in a jolly mood, visible from his posture. The scene is a great respite from the action we get to see in this show.

This one’s another fun Rescue Bots coloring page as all the characters seem to be in a cool and light mood, probably because of the puppy, who wants to play with them. We love the smile on Chase’s face, as we rarely get to see it.

Why does Chase look out of control in this picture? Two cops have intervened to make him understand something, but he is in no mood to listen. Only colors can him down? So what are you waiting? Paint him bright with your watercolors.

Here’s a wonderful coloring page where you need to color by referring to the shade card mentioned below. We think this activity sheet is ideal for preschoolers, who have started learning numbers.

This coloring page features MorBot, made by Thaddeus Morocco with the most advanced technology. It bristles with some of the deadliest weapons, such as a giant cannon, rocket boots, high tech rescuing gears and fire extinguisher.