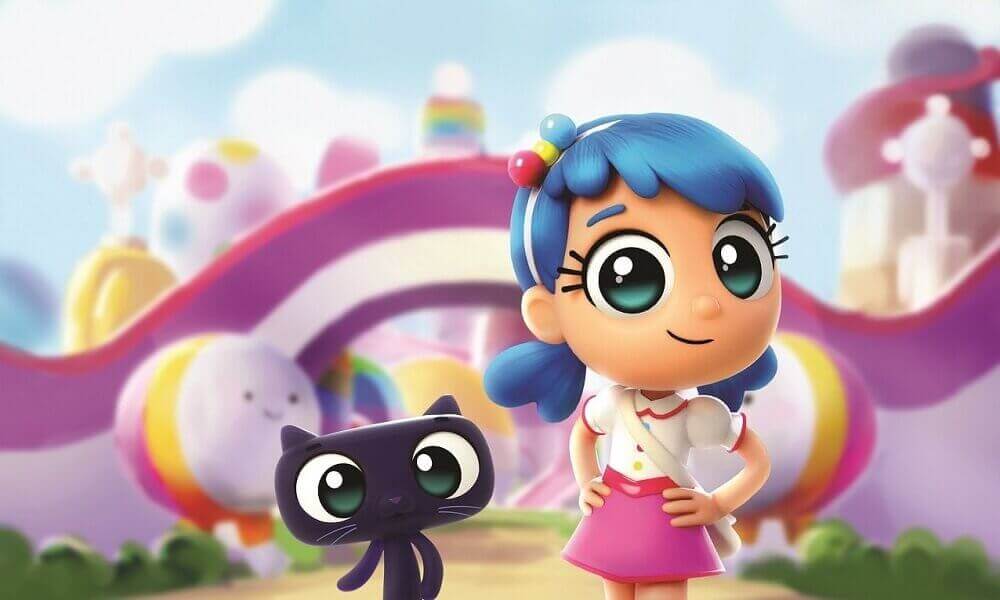 Bartleby is the famous cat who aides True in solving the kingdom’s problems. Bartleby appears to be all heroic and courageous but only True knows that he is not as brave as he pretends to be. Bartleby has something to say about everything, which is irritating to an extent but also helps True in getting another perspective. Color the macho kitty.

One fine day True and Bartleby were trying to make some music. The problem was keeping a constant beat. It is then that True remembered her Beepaw wish. Beepaw bounces up and down constantly which maintained a constant beat while True made some awesome music. Color the bouncing Beepaw.

When one of the pillars of the palace fell down, there was no time to be lost. But the Grizmos are a slow lot and True had to find a way. When one of the Grizmos slipped down the road to the castle, an ides struck True. She called upon Slipzy who made a slide right up to the top of the castle where the crystals could be slid not only down but up as well. Color Slipzy, the savior.

Grizelda is the princess of the Rainbow Kingdom. Her character is completely in contrast to True’s. She throws herself around as arrogant and self-centered even though she is not so bad on the inside. Color her with her pet dog, Frookie, the only friend she has.

Hearya is the wish that works like a hearing aid and sensor. Hearya can pick up particular sounds from a distance and amplify them to you. Color the vital wish for picking clues.

Syzer can shrink or increase the size of any object at the snap of a finger. You have to tell Syzer to either shrink or blow you up and snap your fingers when you reach the correct size. Syzer can be very helpful in critical circumstances, like entering a locked door. Color Syzer.

Elongy, as the name suggests, is a flexible, rubbery wish. Elongy can be stretched as required and often provides a sturdy base for crossing over. Color the ‘springy’ wish.

Bloxo is a wish who can expand according to will. True uses him to carry things as he can store things inside. Color this amazing box.

True is an 8-year-old girl who is the only one capable of activating the special powers of the wishes. Hence, she has taken it upon herself to solve the extraordinary problems of the whimsical citizens of Rainbow Kingdom, of course with her cat, Bartleby. Color True, from the Rainbow Kingdom.

The 8-year-old True is ready to solve all the problems in her third season, streaming now. True teaches us a lot of ethics and gives us inspiration. Color True, dancing in joy, without a worry in the world.

The wishes are the tiny, emoticon looking inhabitants of the Wishing Tree. Zee, the keeper maintains their directory with the help of Wishopedia. True possesses detailed knowledge about the wishes and calls upon them saying, “Zip, zap, zoo. I choose you.” Color the magical Wishes.

Zee can be called the custodian of the wishes. He lives the Wishing tree and takes care of the wishes. Zee is a young kid with freckles on his cheeks who is extremely calm and a great friend of True. True seeks his advice about the proper use of the wishes. Apart from the Wishopedia, Zee has several other tools like the Zingy Zapper, Wish Hammock, and Wishoscope. Color this wise keeper of wishes.

True and the Rainbow Kingdom is a web series for preschoolers, focusing on a smart, girl protagonist, True. True teaches a lot about compassion and empathy without making it obvious. It also doesn’t have violence or other cheap nuances like kids playing truant from school. Rather, the protagonist takes on a lot of responsibility and doesn’t look the least bit troubled about it. All the characters are happy and whimsical in a colorful kingdom except Grizelda. Grizelda’s character further accentuates the contrast between True and her, making it evident for the viewer to choose virtues. True and the Rainbow Kingdom is also different from other preschool web series. The problems True faces are not very easy to solve and the thinking cap needs to be put on. Sometimes, the problems are not solved at once but True keeps persisting which teaches us the importance of hard work. Color these True and the Rainbow coloring pictures while you catch True and Bartleby in action, along with the cool wishes and Zee’s cool tools. And make sure you share your favorite True and the Rainbow coloring images to print too!