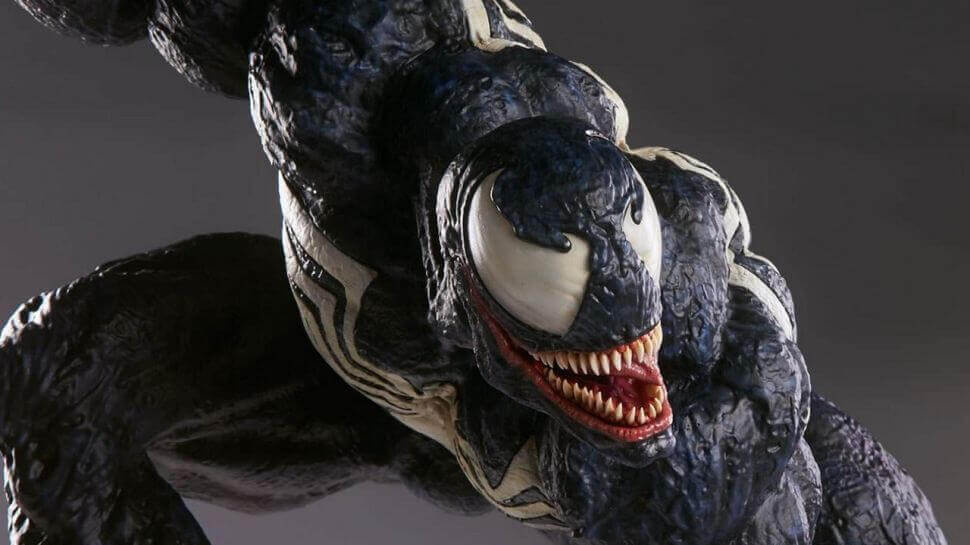 Today we’ve got coloring pages of one of the most complex, enigmatic and notorious villains from Marvel universe- Venom coloring pages. You all must be aware of the buzz surrounding Sony’s upcoming movie, “Venom”, expected to hit the theaters on 5th October 2018. The action-packed trailer of this movie has been released, and it showcases some wild alien effects and the creepy character in action. The movie stars Tom Hardy as the titular character, along with a supporting cast, which includes Riz Ahmed, Michelle Williams, and Woody Harrelson. To help you contain your excitement, we’ve got you a collection of free printable Venom coloring sheets to print. Check them out.

Here’s a coloring sheet of menacing anti-venom all set to spread ‘venom’ on his enemies, who are ironically the savior of the world. The powers of Anti-Venom or Kyntar include mimicking any type of clothing and blending into his surroundings, thereby rendering him invisible. It’s believed that the physical strength and abilities of Anti-Venom are even greater than Spiderman.

Here’s another coloring sheet of Venom in action. Venom, also known as Eddie Brock in his human form, is the fourth recipient of Venom Symbiote, after Peter Parker, the Spiderman, Wade Wilson, Deadpool, and an unknown alien.

No matter how much you deny it, Venom is indeed incredible, even though in not a good way. Venom Symbiote is a symbiotic organism from an unknown planet that grants spider-like powers to its owner and thrives on adrenaline. Symbiotes are not exclusive to one being, and a number of people have worn them over the years, such as Flash Thompson and Lee Price.

This coloring picture features Venom all set to destroy his enemies. Venom, belonging to a race of alien symbiotes, is made from organic thick liquid. And since they’re symbiotic, they have to depend on other beings to sustain life force. And in return, they provide powers to their host. But the symbiotes are not very fond of the idea of separation, so they start consuming the mind and body of the host.

You must be wondering how the idea of Venom even came into existence. We’ll tell you! Randy Schueller, an avid reader, was hired by Marvel who gave birth to the character. The characterization and costume came from Todd McFarlane and Mike Zeck respectively. Venom made its first appearance in Spiderman comics.

How cool is this coloring sheet of Lego Venom along with two other characters? We know one is Spiderman on his left. But who is the other guy? Can you tell us? Meanwhile, fill this coloring sheet is happy colors because these are Legos and Legos must look cheerful and colorful no matter what.

This coloring sheet shows Spiderman and Venom involved in a duel and we are too excited to know who will win among them? Aren’t you? Just to let you know, Venom bonded with Spiderman during the ‘Secret Wars’ in Battleworld’. But Venom rejected the partnership when he discovered it was sentient and has since then bonded with several different hosts.

Here’s another coloring sheet of Spiderman and Venom involved in a fight. What could be the reason behind this fight, especially since Peter Parker or Spiderman himself picked it as its sentient? Is the Venom trying to eat up his mind and body as well? It won’t be easy with Spidey though!

This coloring sheet would be double fun for our readers because it doesn’t just feature Venom, but a lot of other characters, which we cannot identify, except Spiderman. But do you recognize these characters? If you do, don’t forget to write their names near the figures. And of course, feel free to give any shade to these characters.

How incredible is this coloring page of Venom in action? Give it some fine strokes and see how beautiful it turns out. Did you know, even Red Hulk and Ms. Marvel have played host to this alien symbiote and we’re curious to know how it might have helped them.

It’s said that Venom and Deadpool bonded very well initially, but Deadpool abandoned it after few days, citing reasons that it would be unkind of him to force something like a symbiote to bond with a crazy character like him. This is possibly the reason behind the possessive and violent nature of Venom.

Let’s give you a brief about Eddie Brock with this Venom coloring sheet. Eddie Brock was a successful artist before he started writing a series on “Sin-Eater murders”. A fake offender confessed to Brock about committing the murders, and Brock did his best to protect his identity until he was forced to reveal the name. But when Spidey reveal the real name of the offender, Eddie became a laughingstock among his fellow journalist and was even fired.

After Eddie was fired, he spent most of his time working out to reduce the stress. And all the intense physical activity increased his obsession with Spiderman and he vowed to destroy it. It was at this moment, the symbiote joined Brock mentally and physically and took the better of him.

Here’s another intricate coloring sheet of superhero Spiderman and Venom, ideal for adults and teens. In the comics, it stated that Spiderman’s costume was totally ripped when he found the symbiote capsule. So when Spidey grabbed the capsule, it slithered and covered him from head to toe, taking the form of a unique outfit. This coloring sheet probably describes the same.

We’re wrapping up this list with another stately coloring page of Venom. We’d like to inform you that Venom formed a truce with Spiderman and even relocated to a different place. We won’t reveal more, so you have to wait until the movie to release.

So what do you feel about our collection of free Venom coloring pictures? Aren’t they as magnanimous as this epic villain himself? Don’t forget to share your favorite Venom coloring images printable with us by commenting below.