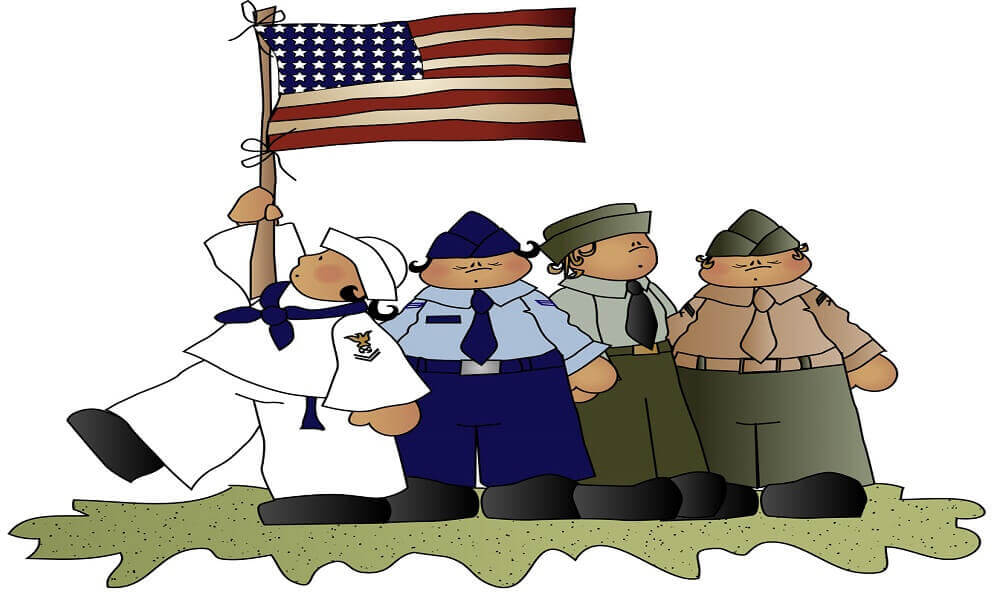 Hello young readers! Do you know in 1918, on the 11th hour of the 11th day of the 11th month, an armistice, or temporary cessation of hostilities, was declared between the Allied nations and Germany in World War I? Commemorated by many countries as Armistice Day, November 11 became a federal holiday in the U.S by the name of Veterans Day. And today, we will learn about this holiday through our free printable Veterans Day coloring pages.

Veterans Day, as the name suggests, is dedicated to the military veterans. A military veteran is a person who has served or is serving in the armed forces. Those veterans that have had direct exposure to acts of military conflict may also be referred to as war veterans. Let us learn about this historic day and these brave veterans through these Veterans Day coloring sheets to print.

Operation Desert Storm or the Gulf War began in 1991 when after the Iraqi forces invaded neighboring Kuwait and refused to withdraw. This conflict is commonly known as the Gulf War. This was pretty short which lasted only 43 days. About 697,000 U.S. troops took part in the war and sadly 299 lost their lives.

Jimmy is very young but understands what his father does for the nation. In the eyes of little Jimmy, his father is not less than a superhero. Whenever his father wears the uniform, he too wishes to wear it one day, for real. Today he is wearing the uniform on the occasion of Veterans Day. Color cute Jimmy and his superhero- his father.

Veterans Day, a day that honors all military veterans who served in the U.S Armed Forces coincides with another holiday including Armistice Day and Remembrance Day. These days are celebrated in other countries that mark the anniversary of the end of World War I, also known as the Cold War.

Salute to the soldiers and all the veterans who sacrifice their lives for protecting their country. This day does not belong to the veterans but is a day that honors all veterans. Color this sheet with bright hues.

The observation of Veterans Day was set as the fourth Monday in October. The first Veterans Day under the new law was October 25, 1971. However, confusion ensued as many states disapproved of this change, and continued to observe the holiday on its original date.

Soldiers of the armed forces have to go through tough training every day. This is what makes them strong during tough wartime. Here, this soldier is climbing a rock, a mountain maybe. Not sure if he is in a real battlefield or not but the efforts he is putting in are the same. Color this hard-working soldier.

During World War II, the American troops landed on the beaches on D-Day. The Normandy Landings is often referred to as D-Day; it was the largest seaborne invasion ever. It is celebrated on 6th June every year. The operation began with the liberation of European regions from Nazi control.

In 1945, World War II veteran suggested his idea of expanding Armistice Day to celebrate all veterans, not just those who died in World War I. Congress amended the bill on June 1, 1954, replacing “Armistice” with “Veterans,” and it has been known as Veterans Day since. The National Veterans Award was also created in 1954.

A part of the Veterans Day celebration includes honoring the martyrs. People often visit the graves of the veterans who died serving the nation to pay their respects. This soldier is doing so, maybe paying his respects to a friend or relative for his sacrifice. Color him in.

Celebrating Veterans Day is a unique opportunity to enhance our commitment to supporting those who wear the Nation’s uniform. There are many ways to honor the men and women who have served the nation, try doing them. Never forget to thank military personnel or veteran if you see one. They protect you and the entire nation.

Veterans Day witness many veterans and military men saluting people and each other. Not just veterans but the common citizens salute them too for their services and sacrifices. This soldier is saluting you. Will you do the same?

Do you know that originally, when Veterans Day was known as Armistice Day, it was meant to honor those who died in World War I? However, when it was amended in the early 1940s, it was changed to honor all the veterans who have served in the U.S. military.

Military rations are the food served to military personnel. It can have 2 types- Garrison rations or Field rations. Garrison ration is the food served to soldiers when they are stationed somewhere. On the other hand, field ration or combat ration or ration pack refer to canned or pre-packed meal transported by military troops on the battlefield. These have a long shelf life.

Poppy Day, also known as Remembrance Day, is a memorial day observed on 11th November in Commonwealth of Nations member states since the end of the First World War to remember the members of their armed forces who have died serving in the war. This day is also marked by war remembrances in many non-Commonwealth countries.

Words are not enough to thank the veterans for their services. But once in a while our kind words or gestures may be something they really need. Here are printable cards for the troopers. Color these, write a note, and send these to the brave, hard-working veterans.

Here’s a card template for you to print and send to the veterans. Color the card, write your name and age and get it printed. Once printed do not forget to send the card(s) to the braves. Don’t just color and send these, mean it and be genuinely thankful for all that they do.

The Capitol Building is the home of the United States Congress and a seat of the U.S Federal Government. It is located on Capitol Hill in Washington D.C. The building was expanded with the addition of the massive dome and expanded chambers for the legislature, the House of Representatives, and the Senate.

Attending parades on such a day is a very good and important thing for you as children. You get to learn a lot about the valor and sacrifices of those who wear the nation’s uniform and serve the country. So next time do try to attend a parade.

The soldiers fight numerous wars for the country, to protect it and its citizens. The soldiers here too are doing that, fulfilling their duty to protect the nation. They are fighting a war, don’t know which. Color these men in action.

Serving the nation, a soldier’s first priority becomes the nation, the country which he serves. They consider their nation everything and respect it with all their hearts.  This veteran is saluting the nation too for all that it has given him. Color him.

Kevin is a paratrooper- a parachutist. He is specially trained for airborne attacks. He has received special training for this as he can seize great opportunities while in the air. Color him with bright colors.

This soldier is saluting the national flag, something he fights to protect. His love for his nation and this flag is immense and selfless. Not everyone can love their nation and sacrifice everything for it. Do you think you can? Do you aspire to be a brave soldier?

Veterans Day is marked by parades and church services and in many places, the American flag is hung. Some schools are closed on Veterans Day, while others do not close, but choose to mark the occasion with special assemblies or other activities.

All soldiers, irrespective of the country, have to undergo difficult and sweat-breaking training. This training is not only physical but also mental. The main objective is to prepare the soldiers for the harsh situations that they might face during wartime.

The Principal Allied Powers consisted of the British Empire, France, Italy, U.S.A, and Japan. The French, English, and Americans declared war on Germans in 1918. German forces fought the Allies on both the eastern and western fronts, although German territory itself remained relatively safe from widespread invasion for most of the war.

On this Veterans Day, recognize the service of the veterans by paying them respect and their families. There are many national parks- battlefields, military parks that honor the services of American veterans. Thus, on Veterans Day, or any day, honor those that have served and sacrificed for the country with a visit to a national park.

Elsie and Tom here are holding the national flag- Stars and Stripes, very proudly. They are aware of their country’s history and are happy that they belong to such a powerful country. Seems like their little dog is happy as well. Color these two cute kids and the dog happy.

Brandon is very happy and proud as well of his nation. He feels lucky to have been born in such a great nation, a nation that has such a great history and rich tradition. Color Mr. Brandon with the brightest shades.

The Vietnam War and involvement of the U.S happened in 1945 but the war began a decade ago. The American veterans had a difficult time after their return from the war. They faced negative reactions from both opponents of the war and its supporters (who saw them as having lost the war), along with physical damage including the effects of exposure to the toxic herbicide.

Mark is on a mission, a secret mission so you can’t really know what it is. He seems very serious about it, he is determined to complete his mission. Are you determined to color this sheet?

It is Mr. Owl, he is very kind and polite, he loves kids. So here he is wishing you “Happy Veterans Day”. He is quite aged but doesn’t look a day old. Color polite Mr. Owl.

Veterans Day often features parades that are the main highlight of the event. New York City has held an annual Veterans Day parade since 1929 and is well known to organize the largest parade in the country with around 25,000 participants each year. The parade commences with marchers, floats, and marching bands.

No matter how strong or brave we are, we can never be as courageous as the soldiers and veterans. This Veterans Day, do not forget to acknowledge the fact that you are thankful for what they do for the nation and all the citizens, including you. Veterans Day is in November, till that time get these Veterans Day coloring pictures printed and fill them up with blazing shades. Don’t forget to share your favorite Veterans Day images with us.