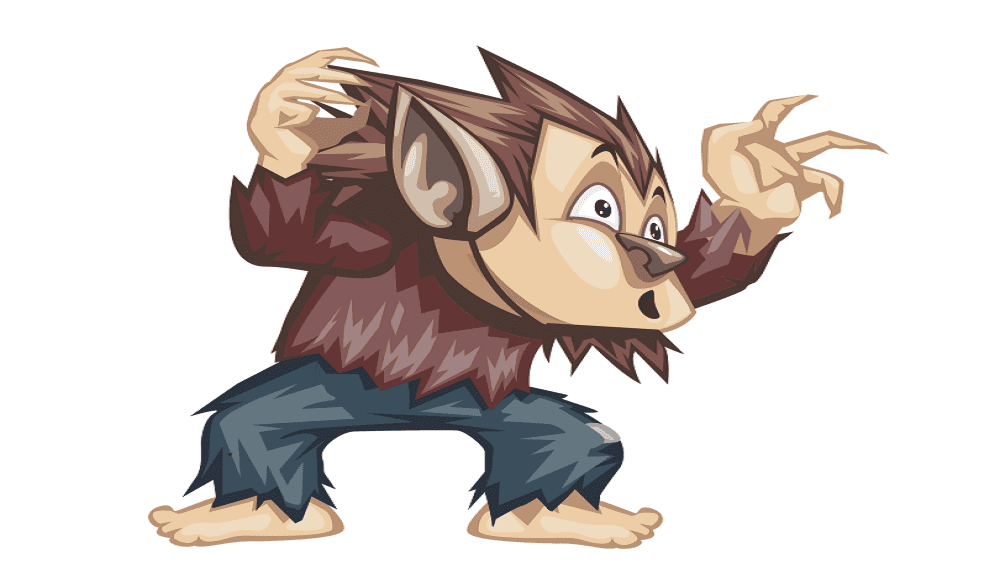 Halloween is here and we have got just the right amount of spook to get you into the Halloween spirit. The topic of today’s collection of coloring sheets pays tribute to one of the legendary creatures of the night. It’s not vampires. But it has a history of animosity with the vampires. If you were thinking of werewolves, then you are absolutely right. We’ve got the best werewolf coloring pages for kids.

According to legends and folktales, werewolves are believed to be humans who are able to turn or shapeshift into a wolf. Werewolves are also known as Lycanthrope which translates to wolf-person in Greek. Some believe that becoming a werewolf to be a curse, while others stipulate it to be a choice. There are also thoughts saying it’s a hereditary condition. Humans are said to become werewolves mostly through a bite or scratch from a werewolf itself. The transition of the human to a werewolf is often triggered on a full moon night, as depicted in movies and television shows.

As with many legends, the line between reality and fiction often gets blurred. Let’s discover for ourselves how real and scary they are through this collection of werewolves coloring pages to print. 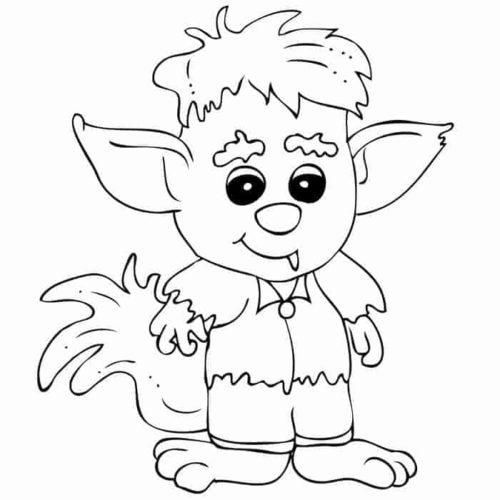 We are starting off this collection with an innocent illustration of a baby werewolf. Look at those fluffy tail, big ears, and that single incisor tooth protruding out of its mouth. Fill this coloring page with some cute colors. 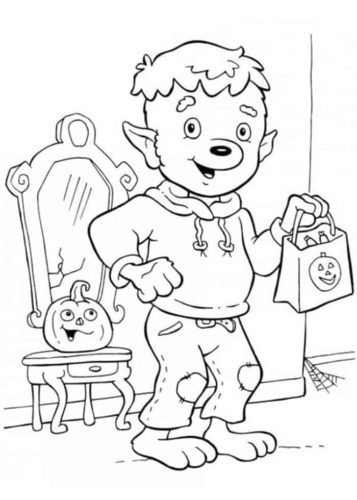 It’s always a good feeling when you are fully prepared for an event. This boy had his costume made in advance, including the fake ears and nose for Halloween. He even got himself a nice trick or treat bag for his Halloween rounds. 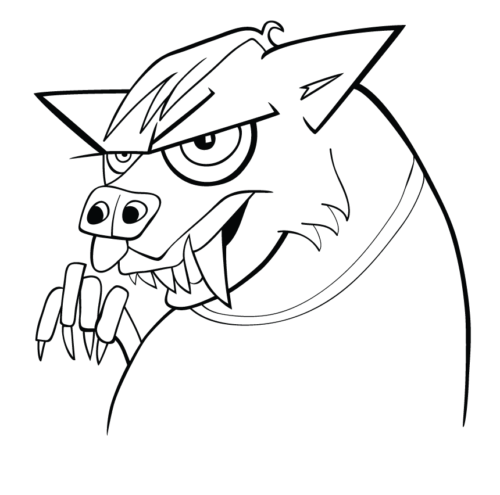 It’s a cartoon werewolf illustration. But just because it’s a cartoon, doesn’t mean it isn’t dangerous. Those long and sharp teeth can do some serious damage. What about those sharp claws? Beware as you fill in some frightening colors in this illustration.

Transitioning is said to be an extremely painful process. This particular human is almost at the end of his transition. It’s hard to believe that this creature was just a human a while back.

Time now for some celebrity werewolves. Part of the Monster High franchise, here we have Clawd Wolf. He was introduced in the collection by Mattel in 2010. His fashion style is on point for a high schooler, don’t you think so? Give this illustration some fashionable colors. 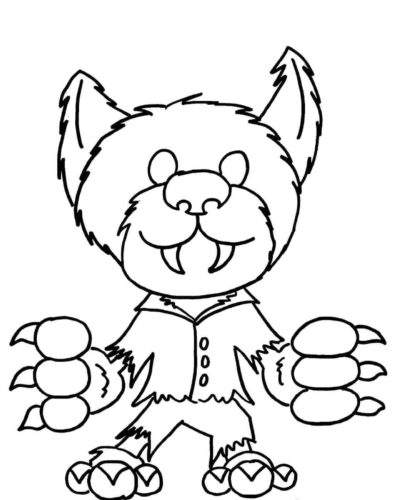 If you are at the beginning of your coloring adventure, this easy werewolf illustration should be easy for you to color. With simple lines and design, be sure to color this scary-looking werewolf with great colors. 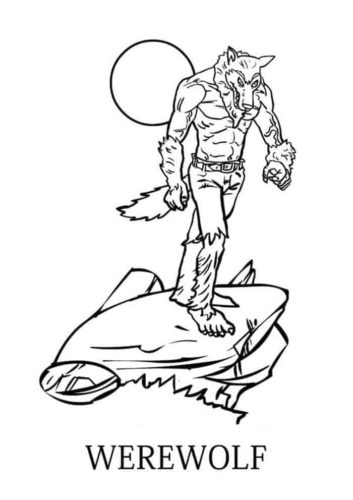 As the full moon appears in the night, the werewolf has now fully transformed. Knowing fully well how dangerous he can be, this werewolf seems to have traveled all the way up the mountains for his transformation. 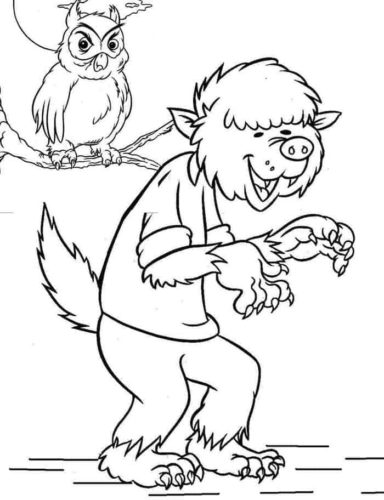 Here is a little man trying to play a prank on his friends while camping outdoors. But instead of looking frightening, he is looking funny as a werewolf, dragging his feet. Even the owl is amused by the boy’s funny attempt at being scary!

It’s the night of Halloween and all the dangerous nocturnal creatures have landed to scare everyone. This particular town with a huge jack-o-lantern in the field gets an unlucky visit by this monstrous werewolf, hungry for some tasty prey. 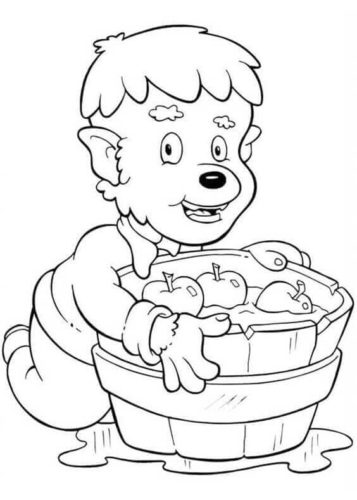 Unlike the terrifying giant werewolf, we have a cute looking kid werewolf for you on this coloring page. He likes eating apples more than anything else. No wonder he has been collecting a crateful of apples from the nearby orchard.

Being bitten by a werewolf recently, this man is experiencing his first transition as a werewolf. The moon is in full bloom in the sky. You can see his clothes tearing up and hair growing all over as he transforms. 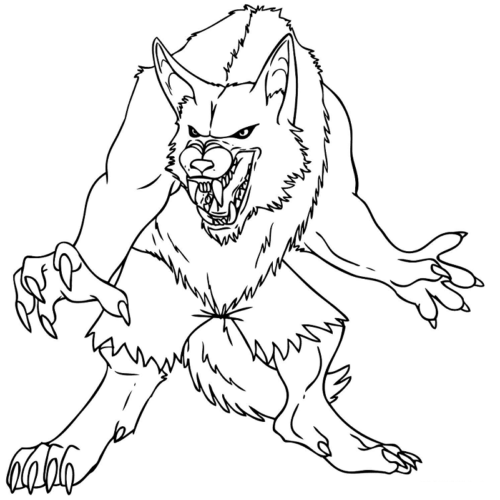 Once the man has fully transformed, this is how fierce and formidable he looks, as a werewolf. The natural animal instinct kicks in and he is driven by the animalistic urges to find and feed on his prey. Capture the wild hunger and fierceness in this illustration with your coloring skills.

Werewolves were one of the prominent creatures contributing to the Gothic horror genre, even interpreted in romances. Today, werewolves are a staple of most fantasy and horror genres. Look at this sneaky werewolf thinking of his dinner tonight. Feed him some appetizing colors instead. 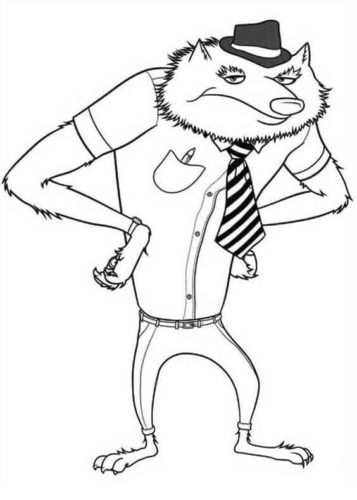 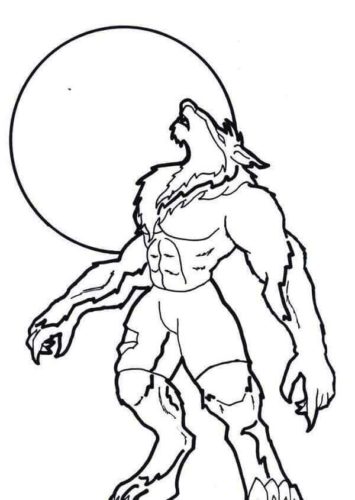 Do you know the first movie to feature the complete full-moon transformative effect? It was in the 1943 film “Frankenstein Meets The Wolf Man” that we saw how the full moon causes a man to transform into a werewolf. Just like the way this werewolf has completed its transformation, howling at the moon. 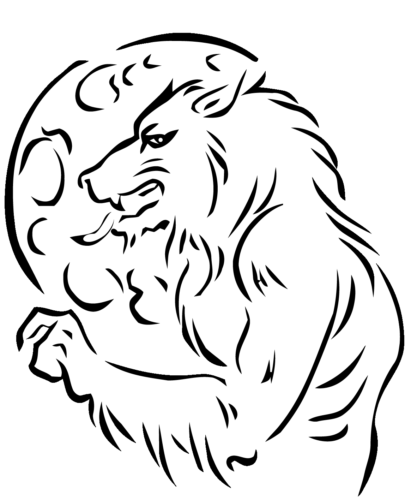 This illustration showcases the full moon and the transformed werewolf in an artistic way. Look at the impact it creates with minimal strokes. Be sure to color this brilliantly sketched illustration with your excellent coloring skills. 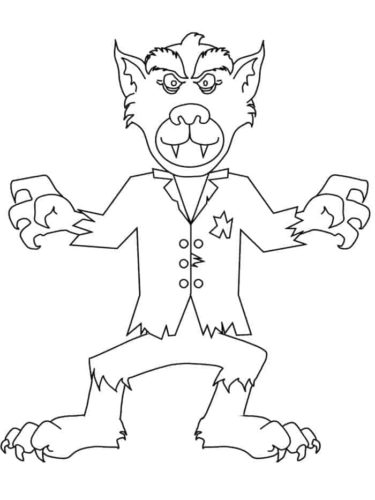 All the kids in the house, it’s time now for you to take center stage with this illustration. This easy sketch of a werewolf is just apt for your coloring skills. Take a printout and carefully fill in the colors to turn this werewolf into something scary.

Werewolves are believed to be super-human in their physical strength and not being susceptible to most injuries. Their vulnerability shows when it comes to silver bullets or anything silver. This werewolf has to be extremely careful while hunting to avoid getting hit by one.

At the height of his hunger, this werewolf has just sniffed a possible prey nearby. Quickly moving towards his prey, he is on full attack mode. Try to capture the urgency and the thrill with your coloring skills. 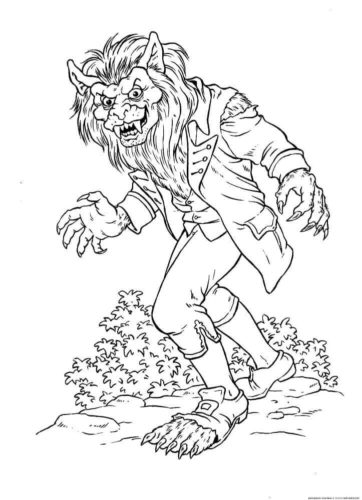 When it comes to a werewolf in their human form, most exhibit an extraordinary healing power, recovering really fast from minor injuries. They are also able to land on their feet from high fall without much effort. This werewolf has just turned from a human and rushing to the wilderness.

Giving you some relief from all the fright and scares in this collection, here we have a funny looking werewolf. Attempting to partake in a dance, the weirdness of his werewolf moves makes the dance hilarious. Make sure you don’t color out of line as you try to control your laughter while you color this illustration.

One of the first things that come to a werewolf’s mind after his transformation is food. There is an intense urge to eat and with their super-effective senses, they can smell their prey from far away. Like this werewolf who is now on his hunt.

As afflicted creatures, werewolves have often been showcased as monsters with a “working class” background, coming from low socioeconomic status in their earlier depictions. Over time, various works showed them as representing different social classes. 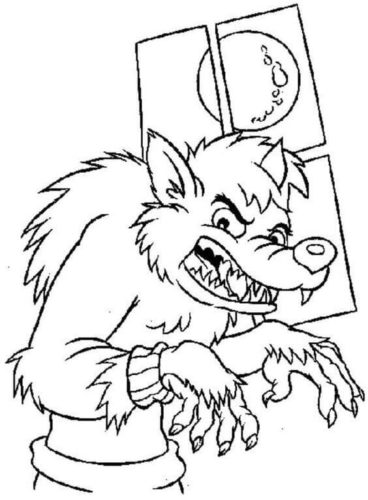 There’s trouble brewing for anyone in this house. A werewolf has cleverly sneaked into the house through an open window. Thankfully, the family is away for holiday. Take a sigh of relief as you print and color this sneaky illustration.

Has this werewolf succeeded in scaring you? Baring his sharp teeth and his pointed claws, this werewolf sure looks like a nightmare. In case you weren’t scared, maybe adding some colors will do the trick. Print this page and fill it with dark, terrifying colors to enhance the sense of horror.

And with that scary attempt, we are at the end of this interesting printable werewolf coloring pages. If you felt the thrill and horror, be sure to share this collection with your family and friends as well. While werewolves only existed in European folklore earlier, over the years, the concept of werewolves has gained widespread recognition. Today it has ingrained itself in the popular culture through various literary forms, movies, and television series. The Underworld movie series or the Twilight franchise, have shown the prominence of werewolves as valiant and heroic creatures.