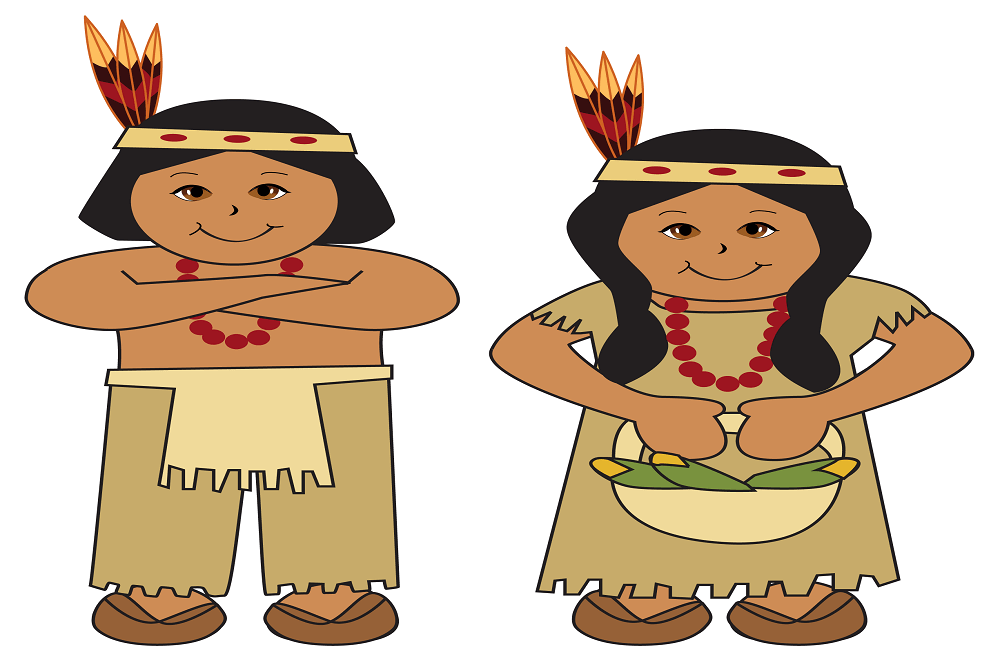 Some tribes of Native Americans lived near rivers, lakes, and oceans. They used canoes or boats for transportation. The traditional Native American boat were generally dugout canoes, plank canoes, and bark canoes. They used to design their boats with attractive decorations, carvings, and paints.  Native Americans used the boats for traveling and fishing as fishing was the main source of obtaining food for living near water bodies. You can also help in making their boat look colorful.

A campfire was widely used by Native Americans, as part of their tradition. They used it for heat, cooking, to ward off evil spirits, and to scare wild animals. This picture shows some elders enjoying the warmth of the fire in the night under the half-moon. This group of Native Americans looks happy and the reason would lie in the fact they have had a good harvest in the season.

The Native Americans are very creative in nature, and this can be witnessed, in the design of their homes. Some of the tribes were nomadic, and their houses were temporary and portable. Such houses were made of poles and animal hides and were known as Tipis. These Tipis were arranged, in closed surroundings and people would carry out their daily activities. The fireplace was important in the Native Americans town as they considered it sacred. The picture shows how people have gathered for some religious practice near the fireplace. You can use different colors to paint their Tipis.

The lives of the Native Americans changed significantly after the Spaniards introduced the horse to them. Horses were very useful in the hunting of buffalo or bison. Commuting from one place to other becomes easy and gradually they started leading a life of a nomad. This picture describes how nomadic would carry their belongings on a horse and travel to a distant place in search of land, food, and habitat.

The Native Americans lead a life of hunters and gatherers. Native American tribes who were involved in farming would grow beans, turnips, maize, and squash. The man in the picture is sitting with maize in the basket, pumpkin and some earthen pots. Native Americans would store surplus food for future use. He is probably interested in selling his products in exchange for other things.

This picture shows a young Native American boy and girl who are dressed traditionally. Native Americans were friendly and the same is reflected, in the smile of these young kids. They have come to welcome the younger group of the Pilgrims. Feathers were very popular especially in headwear in Native Americans dressing.

This is a drawing of Kachina Doll which was gifted to kids so that they learn the religious significance and story attached to Kachina doll. Kachina means spirit and the spirit could be of any deceased family member, animal, or deities. These dolls are made of wood and gifted to kids as an object to be treasured. This masked doll is carrying a wooden turtle which symbolizes water and good rain in their culture.

The nomadic tribe’s lives were made easy after the introduction of the horse into their lifestyle. For the nomadic traveling with their belongings become easy as they used to change their place more than five to six times in a year. The young kids, in the picture, are set on a joy ride to the nearby town. The houses in the backdrop of the picture are Tipis used by the nomadic.

The styling of Native Americans had interesting and attractive patterns. Our coloring pages are a great way to learn about the styling pattern of these people. Coloring head wears of different types, jewelry, clothing and their homes give the opportunity to learn about them in a fun way. You can see how men used to wear a long shirt as a dress and women would also wear a long tunic style dress.

This picture shows a Native American boy holding a bow. Hunting was the main profession of this tribe as they depended heavily on animal meat as the primary source of their food. The feather in the headwear shows that they were warriors and brave tribes. The conical shape house in the picture was a temporary arrangement of residence as they would often travel from one place to place. They use to make different patterns on their home and you can give them beautiful colors.

This little Native American boy has participated in the race with other boys. He is determined to take the first spot as he is interested in winning the prize. If he wins the race, some more colorful feathers would be added, to his headgear. Till the time, he gets more feathers you can color the one feather on his headgear.

Games, sports and music were a way of spending free time for Native Americans. Rattles and drum were widely used by them, for the purpose of entertainment and celebrations. This girl in the picture is carrying a small-sized drum made of wood. Hoop drums and Shaman drums are some popular types of drums. Drums were widely used by Native Americans to mark social and religious ceremonies.

Yes, kids, Native Americans used to call horses big dogs or God dogs. Horses played a vital role in transforming them into nomadic hunters and warriors. They called it a big dog because earlier they used dogs for carrying their belongings from one place to other, but they were able to carry more loads after the coming of horses in their life. The picture shows a fierce hunter riding a horse with a spear in his hand aiming at the most desirable target.

When horses were introduced to the Native Americans, they played an important role in significantly changing their lives. The tribes would often travel with their belongings including materials for making temporary houses. Such a load would easily be carried, with the help of horses. Even women were able to ride conveniently with loads attached to the horse as shown in the picture.

The powerful person who had led their people in the war would often refer to as Chief, in Native American culture. War bonnets or headdresses were often referred to as the Chief of a particular tribe. The chief used to wear a big-sized war bonnet with a covering of lots of feathers. A huge amount of feather means a high rank in order. The picture shows how a Chief is discussing vital information with his man. This image has a lot of scope for coloring.

This picture clearly shows a normal day in the life of Native Americans. The nomadic tribe used to live in a movable shelter which was called Tepees. They used to make their house every time they travel to a new place. A horse was very important for them as it was used, for transporting goods to the place they choose to settle down. The woman on the horse in this image is making arrangements to reside in a new place.

The little girl in this coloring sheet looks very cute with a puppy in her quiver. This little Native American is supposed to learn archery but at this moment she seems interested in taking care of her pet. A quiver is a safe and comfortable place for her puppy while she is busy counting the petals of the flower in her hands.

The two men are getting ready to participate in the tribal dance. The man in the front was heavily decked and started thumping the ground with his feet. His dancing moves are so effective that the man behind him wonders if he could match his spirit. The tribal designs on the pillar and their attires would become more appealing if you fill them with colors.

Hunting was a major activity for arranging animal meats for Native Americans. Animal meats and fishes were the popular sources of food for them. They were good hunters who took to archery for killing wild animals. You can see the man in the picture is aiming at his prey very attentively and he is determined to succeed in his attempt. A bow and an arrow were initial and dependable means of hunting.

Have a look at this Native American Doll that truly represents her tradition. The doll had a significant place in the tradition, culture, and beliefs of Native Americans. This doll is carrying her little brother at her back. The two are happily looking at you and do you know the reason for the same. They are hopeful that you will add some lovely colors to their picture.

The feather headdress in this picture is very significant to the tradition and culture of Native Americans. This headdress or headgear is also famous as warbonnets traditionally worn by male leaders. The feathers of eagles are used, in headdress and, more feathers mean more respect. They were worn by the leaders, during wars and ceremonial occasions. You can choose multiple color combinations for this respectable headdress.

Native Americans give values to their customs, traditions, ceremonies and dressing style. These habits were inculcated, in their kids from the very beginning. This little girl is dressed traditionally and welcoming you kids with a basket full of eatables.

The little native boy is very excited for Thanksgiving Day and has brought a bag of maize for his Pilgrim friends. He wants to look colorful before he meets his friends and you can easily do this job.

This is the image of a traditional-looking Native American woman with two braids kept in front. The traditional dress for a woman was a long tunic or a long shirt tucked over a belt. The basket in her hands shows that she belongs to the farmer’s community and is carting the harvest.

The Native American women were mainly entrusted with household chores and sometimes also played the role of warriors, builders, and farmers. The women in the picture are enjoying the warmth of a fire in their free time.

When the Pilgrims decided to celebrate Thanksgiving Day after the harvest, they heartily welcomed the Native Americans for the great feast. The role of native people was significant in finding a place for the pilgrims. The two natives in the picture have arrived to take part in the three days feast of thanksgiving.

The Pilgrims and the Native Americans share-friendly bonds as they both worked towards building a healthy relationship. The Pilgrim boy in the picture is amused to see the traditional piece of jewelry in the neck of the native girl. He might be asking for the necklace in exchange for his sling.

Pocahontas was a Native American princess, daughter of the chief of the Powhatan tribe.  The image describes the role of Powhatan woman indulged in the activity of processing harvest products like maize, beans, and squash.

The indigenous Americans have a vast history of tradition and culture, and our Native American coloring pictures are aimed at giving a glimpse of their culture. Take this opportunity to draw an image about their lifestyle and let us know your favorite Native Americans coloring images printable below.