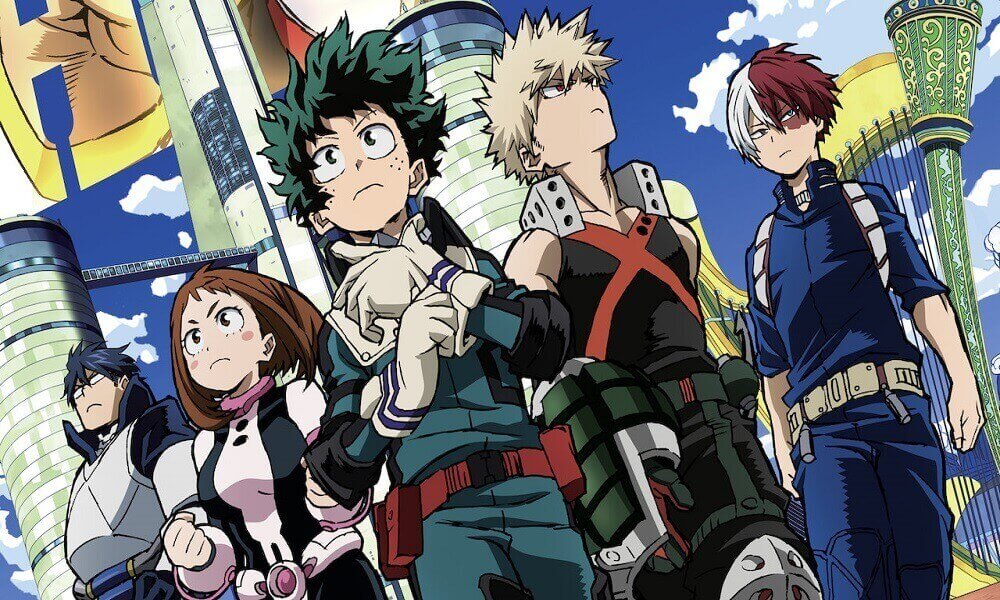 While there is good in the world, there is also bad. Good people doing good deeds and fighting off bad people trying to harm it. The same is true in the world of superheroes as well. Today’s collection of coloring pages is inspired by a Japanese superhero story – My Hero Academia – a world where Heroes are fighting off Villains.

Written by Kohei Horikoshi, My Hero Academia is one of the recent super hit manga and anime shows. It is set in a world where almost everyone has a unique quirk or superpower. However, the main protagonist, Izuku Midoriya, does not have superpowers. Luckily for him, he gets enrolled in U.A. High School, a training school for heroes, by All Might, the greatest hero of Japan after he shares his quirk with Izuku.

Winning several prestigious awards around the world, My Hero Academia is in its fifth season now and has already been heralded as one of the best in the 2010s. Let’s get acquainted with its many marvelous characters through this collection of My Hero Academia or MHA coloring pages to print. 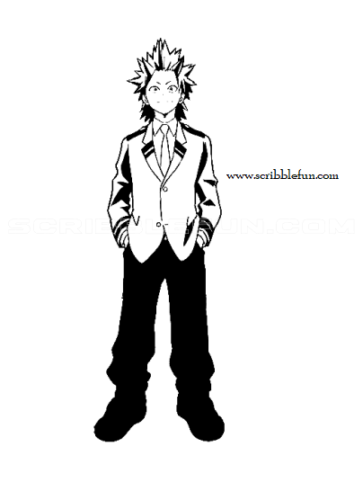 Starting off the collection is Eijiro Kirishima who is also known as Red Riot. Part of the Class 1-A students, Eijiro Kirishima has a quirk or superpower of being able to harden up his body, which is called Hardening. But he also has issues with his self-confidence. Comfort him by filling this coloring page with reassuring colors. 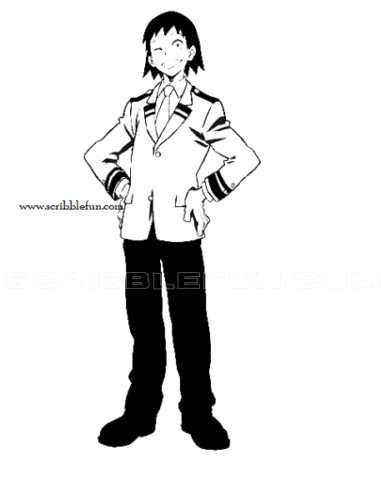 Next, off we are coloring another boy from Class 1-A. His name is Hanta Sero with a quirk known as Tape. As the name suggests, this superpower allows him to shoot cellophane tape. That’s why he is also called Cellophane. His elbows are like tape-dispensers, which unravel cellophane tape. 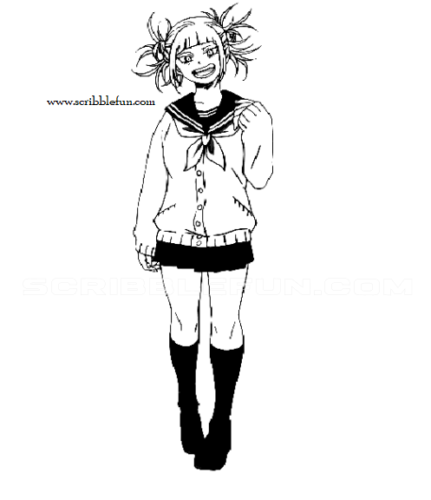 We are now in the presence of one of the antagonists. Part of the Paranormal Liberation Front, Himiko Toga has the ability to take up the appearance of others. In order to achieve this, she has to first ingest the blood of those who she wants to transform into. 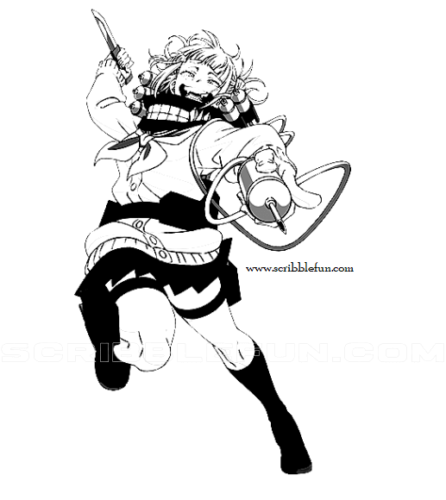 With her quirk known as Transform, Himiko Toga, has the ability to fool others by assuming the appearance of one of the good guys. Here she is with her needles and even a knife, engaged in an animated fight. 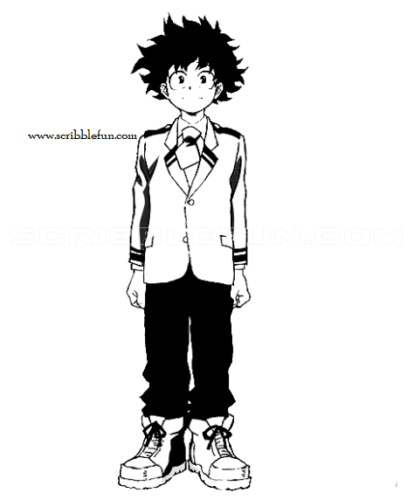 It’s time to meet the main protagonist of the series, Izuku Midoriya. The boy who had no quirk becomes the chosen one by the ultimate hero, All Might. His quirk passed down from All Might is known as One For All, a quirk that can be passed on to others. 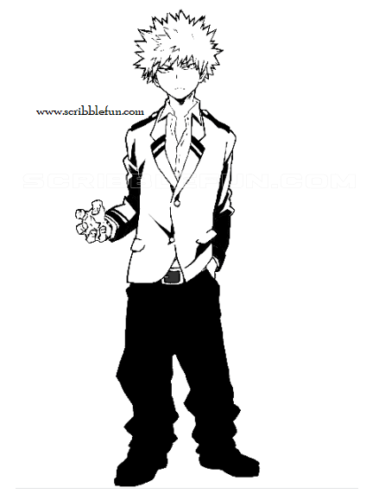 Once a good friend during their childhood days, Katsuki Bakugo grows up to become Izuku’s arch-rival and even bullies him. However, things start to change when Izuku gets his quirk. Katsuki has the quirk known as Explosion, which gives him the power to turn his sweat into explosives. 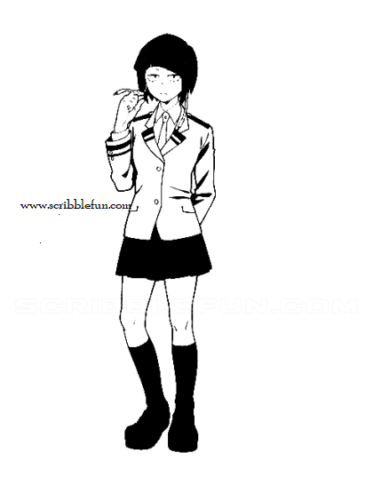 Belonging to Class 1-A of the U.A. High School, Kyoka Jiro has extremely long earlobes. This is also her quirk – Earphone Jack. Kyoko possesses the ability to listen to sounds by attaching her earlobes to objects. She can also transmit the sound of her heartbeat through this process. 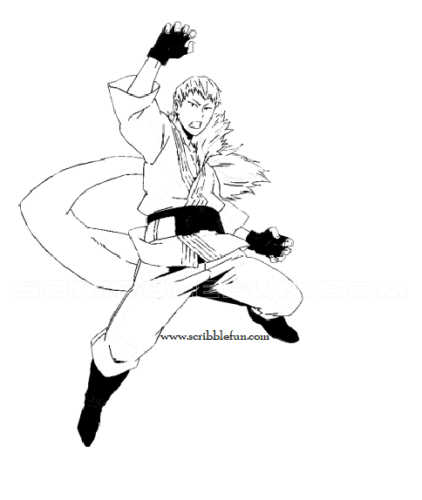 We seem to have caught our next student in action on this coloring page. This is Mashirao Ojiro, also known as Tailman. His other name comes from his quirk called Tail. As illustrated here, his quirk gives him a thick prehensile tail much like those in some primates. 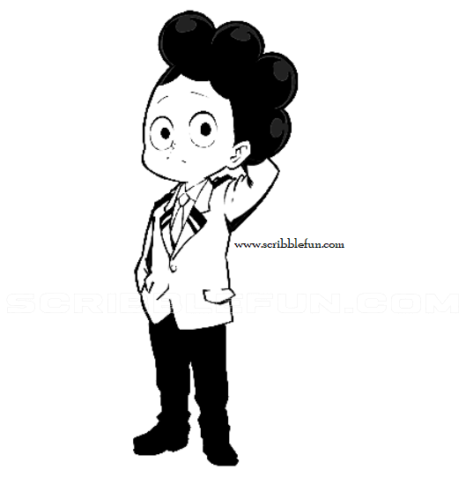 Here we have a younger member with a curious set of hair on his head. This is Minoru Mineta, also known as Grape Juice. The huge hairstyle is part of his quirk called Pop Off. He can make balls, highly adhesive ones from his head, and use them as weapons. 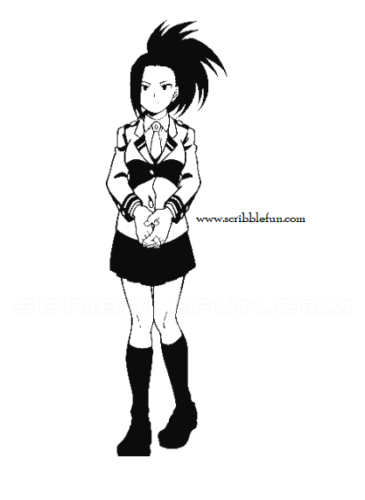 Momo Yaoyorozu is another one of the students belonging to Class 1-A. Her other name is Creati due to her quirk Creation. Once she knows the molecular structure of any non-biological object, she can create them using the lipids in her body. 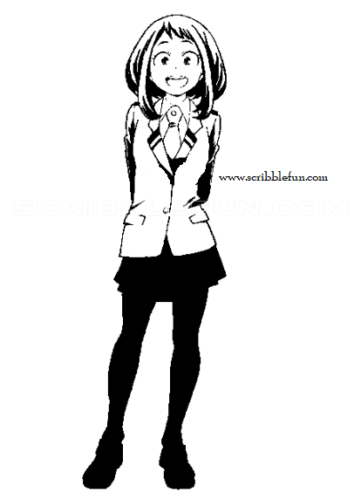 Another girl student with another interesting quirk. This is Ochaco Uraraka also known by her other name Uravity because of her quirk Zero Gravity. Once she gets all her five fingers on any object, she can make those objects weightless. 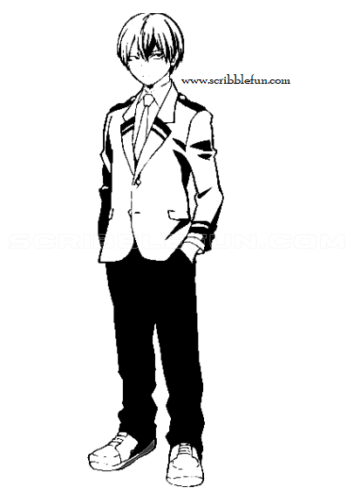 Meet Shoto Todoroki from Class 1-A, with a quirk known as Half-Cold Half-Hot. The name itself explains the quirk. The right side of his body produces cold ice while the left side blows out hot fire. 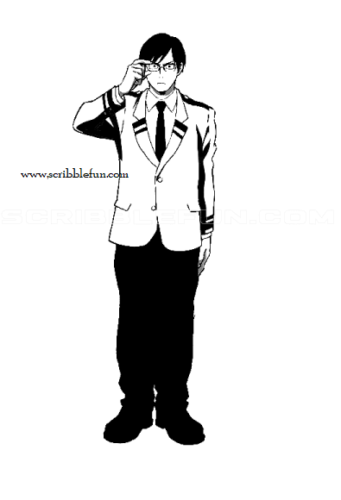 Class Representative of Class 1-A, Tenya Iida is a serious fellow with a quirk known as Engine. His legs have jet engines that give him super-speed. That explains his other name, Ingenium. 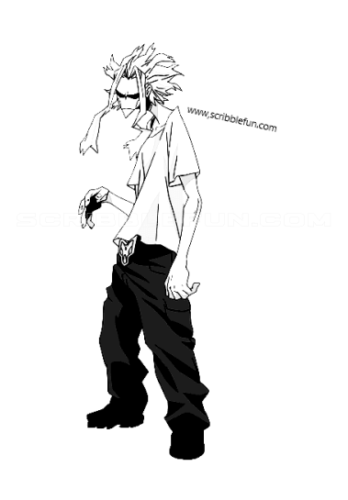 Among the rare people with the quirk One For All, Toshinori Yagi, or All Might, is rendered unable to use while fighting All For One. He is seen and called as the Symbol of Peace by others. 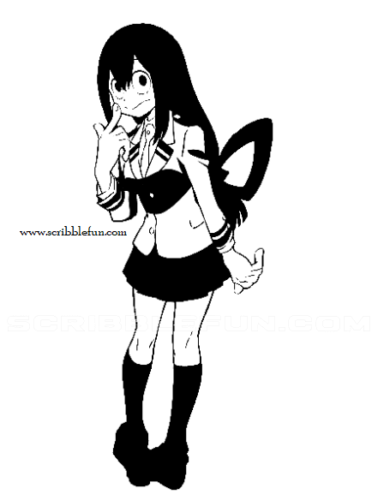 Finally, we have Tsuyu Asui, who is also known as Froppy due to her quirk Frog. Her Quirk allows her to swim extremely well and gives her a long, prehensile tongue just like a frog.

On that froggy note, we have reached the end of today’s collection of My Hero Academia coloring pictures to print. In case you haven’t read the manga or seen the anime series, you can catch up on the story while coloring this incredible collection. If you felt inspired and super-charged by this printable collection, you can also check out other anime coloring sheets collections.