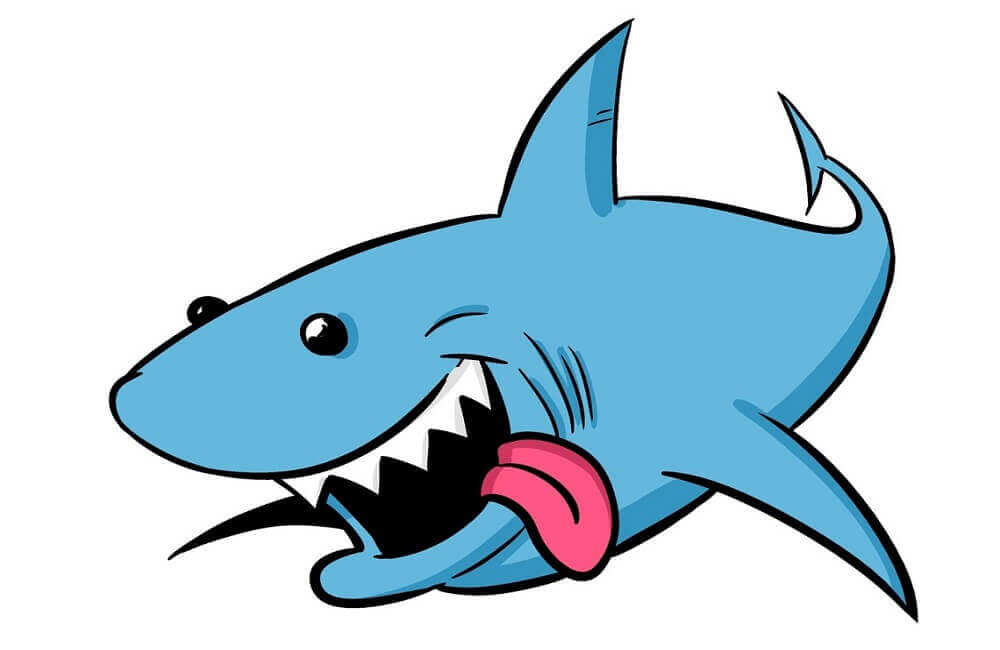 Good day children! Get ready for an interesting collection about an equally interesting and formidable creature for your coloring exercise today. We are venturing into the underwater world and taking you through a collection of shark coloring pages printable.

Estimated to have originated in the oceans some 440 million years ago, sharks are actually fish. They come in varying shapes and sizes, most species are in danger extinction according to the International Union for Conservation of Nature (IUCN). Often misrepresented as being unnecessarily aggressive in popular cultures through films like Jaws, sharks are actually intelligent creatures and not known to attack unless provoked or threatened. Let’s start our undersea adventure and get up, close and personal with one of its majestic creatures through this collection of shark colouring sheets to print.

Inaugurating our collection of shark coloring pages today are the angel sharks. Don’t they remind you of another famous animal in the ocean? Yes, the angel sharks look like the stingrays because of the way their bodies are so flattened. Admire the detailing on this illustration as you add colors to this page.

Come Summer and you will find yourself basking in the sunshine as well, much like these basking sharks in this illustration. These sharks feed on planktons using their large mouths near the surface of the ocean. That’s how they got the names, appears to be basking in the sun.

With a name like a bull shark, it is no wonder that these sharks fall on the types of sharks that are aggressive. You can see from this illustration, the incredible shape of the bull sharks. Print this page and add your details on this coloring page.

If you have seen animated movies and series on television, then you will instantly identify this illustration like that of a shark. Despite those giant and powerful teeth and massive body, this shark here looks so friendly, almost cute, doesn’t it? Take a print of this coloring page and give this cartoonish shark some dash of colors.

Thanks to the discovery and the study of fossils that were extremely well-preserved, this Cladoselache shark

illustration could be made possible. This is an example of a primitive shark which is now extinct and once existed in the oceans, growing up to six feet in length.

It was just another holiday for Donald Duck, taking a walk in the beach and going into the water snorkeling to see the creatures of the ocean. It all turned dangerous when Donald Duck bumped into a mean and feisty big shark. Bring this thrilling moment to life by printing and coloring this page.

If you thought that all the sharks in the world are giant and supersized creatures, you are mistaken. Take this shark for example, which is only about 20 cm in length. What makes it special is not just the small size but also its ability to produce light. Yes, they have photophores which allow them to produce light. Because of these qualities, they are aptly named dwarf lantern shark.

Arguably the most popular or widespread illustration used when it comes to sharks are the sharp long teeth and the wide open jaws. Look at those teeth in this coloring page. They are really big, aren’t they? Print this page and do justice to this open-jawed shark illustration with your coloring skills.

Giving you an insight into the fun and playfulness of the sharks is this illustration. Looks like this shark is having a great time playing around with other sea creatures. Can you spot the other animals? Yes, there is an octopus and a crab too.

It is an interesting meeting of two fishes in the water. The big fish shark here is happily greeting the small curious little fish. What are they talking about here? Perhaps they are wondering about how you are going to color them and what color you are going to use to bring them to life.

Looking at this shark you cannot help but just smile as widely as it is smiling in this illustration. The teeth do not look so scary here. And with the googly eyes, the expression of the shark is simply funny!

Getting its name after the location where they are mostly found, the gray reef sharks are beautifully illustrated on this coloring page. You can find a few reef elements on the page as well. Swimming around in shallow waters, these two gray reef sharks seem to be communicating with each other.

Perhaps the most well-known among all sharks, at least in the popular culture, the great white shark belongs to the mackerel shark species. Studies have found that they have a long lifespan, up to 70 years or more. That is the somewhat the same as an average human lifespan.

Since you now know how the hammerhead shark got its name from the funny illustration, you can now check out their realistic look on this coloring page. You can see how the head spreads and flattens oddly to form the hammer shape.

You can distinguish horn sharks by looking at its numerous tiny dark spots, the blunt head and large spines. Adults and young ones do not reside in the same area. Most of the adult horn sharks are found in shallow reefs while the young horn sharks prefer deep sandy locations.

Living in a group community, lemon sharks are nocturnal in their feeding habits. They are named as such because of their yellowy skin coloration, resembling a lemon. Look at how skillfully this lemon shark is using its tail to maneuver in the water.

Inhabiting the shallow coastal areas in water about 4-meter-deep, the leopard sharks are easy to spot thanks to its large dark spots on its back. It is because of these spots that they are named leopard sharks. Print this page and enjoy coloring these leopard sharks and the rocky shallow flats.

Another one of the mackerel sharks, mako sharks are of two types – longfin mako sharks and shortfin mako sharks. They can grow up to 4.3 meters in length. Print this page and do justice this illustration with your coloring skills.

Like the cladoselache sharks, the megalodon sharks are also extinct species of sharks. Their approximate time of existence is believed to have begun some 23 million years ago. The name Megalodon means “big tooth” in Ancient Greek. Make the best of this illustration of the megalodon sharks and give life to this extinct shark with your lively colors.

Here’s another example of a funny illustration to showcase the name of the shark. Looking at this picture and the first letter clue, it is easy to guess that this particular shark is called “N for Nurse shark”.

Representing the shark community from the prehistoric era is this crafty illustration of the Xenacanthus or Pleuracanthus sharks. They are estimated to have lived till 202 million years ago before becoming extinct. You can easily distinguish them with the serrated spine at the back of its head.

This unique shark gets its name from the unique structure of its snout. The thick, long saw-like snout or rostrum comes with numerous sharp teeth enabling the saw sharks to tear their prey. Print this page and give this unique creature your best colors.

Knowing fully well about its reputation as an intimidating and fearful figure, this huge shark is playing a prank on the new little fish. No wonder the little fish is looking so scared. You can tell the little fellow it’s just a prank by printing this page and filling it with fun colors.

If you are not very good with colors as yet and are still learning to color properly within the lines, you can start with this illustration. This simple sketch of a shark highlights the major features of a shark, like the fins, teeth, and eyes, so that you can easily color them.

There are two types of sharks visible in this illustration, co-existing in the same environment. Make sure you fill in their distinct colors for the different shark species after you print and start coloring this page.

Look at how happy this shark is looking as it enjoys a swim in the reef. Maybe it is excited to be exploring the corals for food or simply admiring the underwater beauty it calls home.

Sharks are great predators. That’s why this illustration shows them as fighters or soldiers ready to hunt its enemies down. Print this page and color this exciting sketch of a fighter shark.

If you saw this shark in real life, it would be so terrifying, right? Do your best to showcase the terror in this illustration with your coloring skills, especially the open jaws and those teeth.

Learn about the different types of sharks you can find in Australia’s Queensland waters through this illustration. You can find the lemon shark, white tip reef shark to wobbegong shark, hammerhead shark and more, in this part of the world.

Believed to be named after an Australian aboriginal word, wobbegong sharks are called as such because of the outgrowths around the mouth which look like “shaggy beard”. Give this shark with an interesting name equally interesting colors.

On that interesting note, we have reached the end of today’s fun and informative collection of shark colouring pages printable. Like all the creatures on our planet earth, once you get to learn about sharks you will find them interesting and unique. As of today, a majority of the shark species are listed as Vulnerable (VU), most of them Endangered (EN) and some Critically Endangered (CR) as classified by the International Union for Conservation of Nature (IUCN). You can help save these creatures from extinction by spreading awareness at home, school or community by discussing them or even through this collection of shark coloring pictures to print.