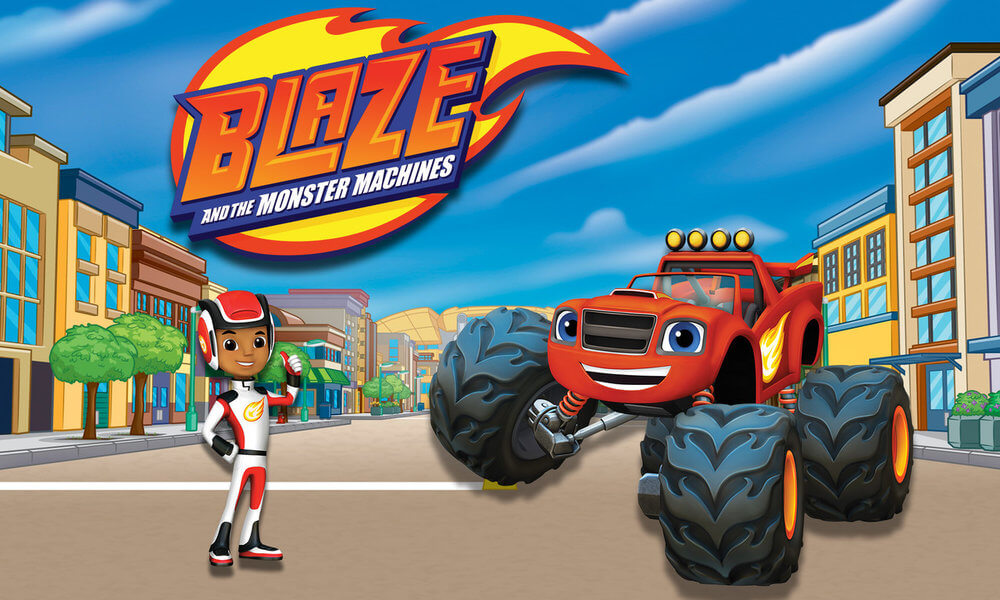 Nickelodeon’s ‘Blaze and the Monster Machines’ is an interactive educational fiction series focused on the concept of STEM. Confused? Well STEM is the abbreviation for Science Technology Engineering Mathematics. Not as tough as it seems. The series revolves around the life of a shapeshifter monster truck ‘Blaze’ that can transform itself into any vehicle or machine, and AJ his young, but a talented driver. Their world consists of humans as well as many monster trucks some good, some bad. Let us take a look at some top Blaze and the Monster Machines coloring pages from the series that we have got for you!

Here’s a coloring page of Blaze, a kind-hearted, loyal, and brave monster truck. He is an unbeatable racer with blazing speed hence the name, Blaze. Blaze is always a helping hand to his friends! Let’s start coloring him to make it dazzle!

Meet AJ, Blaze’s 8-year-old driver, and best friend. He uses his helmet visor and skywriting gloves to get out of challenging situations. He has an analytical mind when comes to problem-solving. AJ usually wears a red, white and black racer outfit with a flame symbol on it.

Gabby is a 9-year-old Axie city’s mechanic. Her skills and reliable tools make her the mechanic of the topmost trucks in the town. There is no such damaged truck that can’t be repaired by her. She is seen wearing a pair of overalls with a gear symbol in the middle, added with a pair of gloves.

“Daringtoooooon” that’s exactly how it sounds when Darington speaks! Darington can be clumsy at times, but is highly competitive! He is a dark blue monster truck with a white front bumper and has a star pattern on his blue and yellow tires.

Zeg is a half-monster truck, half-triceratops! It is believed that he has been Blaze’s buddy since ages. He can get a bit violent at times, but deep inside he has a loving heart. He is yellowish-green in appearance with some mix of turquoise.

Stripes is an impulsive monster tiger truck, always ready for some action. He possesses a super sense of smell, accompanied by retractable claws. Stripes is orange in color with purple stripes. The two stripes on his front bumper resemble whiskers!

Starla is a cowgirl monster truck, with a heavy southern accent and an outspoken personality. Since she is a roping expert, she always carries a lasso rope by her side. Her appearance is purple with white trim on the bottom. The white cowgirl hat with a star in the middle complements her cowgirl avatar.

Crusher is the main antagonist of the series. He is a cargo monster truck, blue in color. He is egoistic, arrogant, and whiney and can cross any limit for winning the race. In spite of all his traps, Blaze and AJ always win the game.

Pickle a green monster truck, is Crusher’s underrated sidekick. He is a goofy goober. Secretively he is Blaze’s huge fan!

Bump BumperMan is the host of every race match. He is yellow in appearance, wears a cowboy hat paired with a yellow tie. He informs the audience about the happenings of the event.

Here we see AJ taking a glare at his trophy. Well, this wouldn’t be possible without Blaze as they share such a strong bond!

Being the best mechanic of Axie city, Gabby leaves no stone unturned for repairing the damaged monster trucks! She is a reliable mechanic, indeed! So let’s take the colors and start coloring this beautiful picture of her.

We are very well aware of Blaze’s transforming power. In this picture, it seems that Blaze has shape-shifted into a road roller. How happily he is rolling it! Let us color him with the same enthusiasm.

This is one of the cutest Blaze and the Monster Machines coloring pages as it captures best pals Blaze and AJ enjoying each other’s company here. Getting a match like them is hard.

Stripes, resembling a monster truck, is always seen leaping and pouncing as seen in the picture. He is also great at jumping and climbing.

Crusher is seen here portraying an evil smile. What trap do you think he might have set to push Blaze down? Do you recall the trap? If no, keep on thinking while you color it!

AJ and Blaze’s friendship can never be ignored! They exchange a hi-fi for a victory achieved by their combined efforts.

We all know how useful AJ’s helmet visor is! Here AJ is seen locating Stripes who is believed to be in some threat!

Stripes’ adventurous nature never keeps him steady! He always has some wild adventure going on his mind. What do you think he must be thinking here?

How exciting it is to see the rivals competing! Who do you think will win?

Gabby is always willing to help monster trucks! She tightens the fuel line, boosts suspension and fixes the gear ratio and makes Blaze and AJ all set for the race.

We are all acquainted with Crusher’s evil nature. He can go to any extent to win the race! What do you think, what has he spoiled now?

Darlington is the showman in the truest sense. He knows how to impress others with his incredible tricks and stunts. In this picture, he is seen creating the same dazzle!

Falling victims to Crusher’s trap, monster trucks get enclosed in a large-sized bubble. How would they escape this situation? What do you think? Think about it while coloring them!

Blaze is seen enjoying Christmas with delight. Look how happy he seems! Coloring a happy Blaze would even bring a smile to your child’s face.

AJ loves going on thrilling adventures. He stuns everyone by getting out of unpredictable situations. He is a born racer!

Starla’s roping skills can never be ignored! She carries a lasso and is very proficient in using it. She also runs a farm in the countryside.

Where is our favorite group heading to? Any guesses? Put on your thinking hats as you fill this Blaze and the Monster Machines coloring page.

And this is the final picture for you guys! The entire monster truck troop!

Here’s a little something for our preschooler buddies. This connect the dot coloring page will help our little friends learn numbers in a fun way.