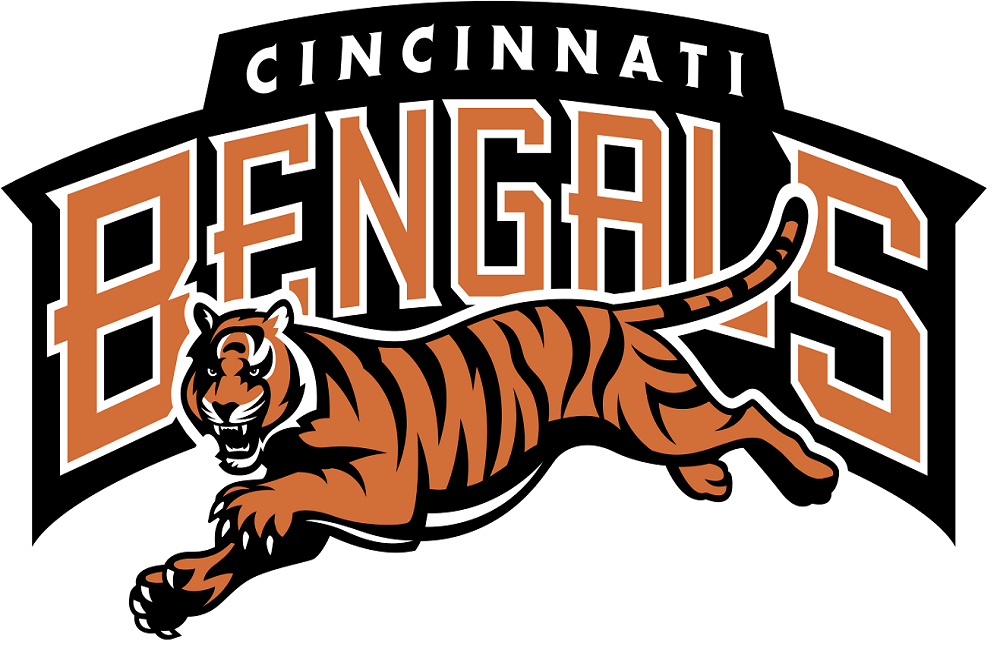 Cincinnati Bengals, an American football team has secured its place in the Super Bowl and will play against Los Angeles Rams on the 13th of February 2022. The team was founded by former Cleveland Browns’ head coach, Paul Brown in 1967. Cincinnati Bengals have played Super Bowl a couple of times but failed to get the trophy home. Maybe this time, they’ll be lucky. Let’s cheer for them with our collection of Cincinnati Bengals coloring sheets.

This coloring picture features the 1968-1969 logo. It’s basically an illustration of a Bengal tiger running with a football and the helmet of the team right behind it. It’s a pretty cool design but doesn’t really go well as a logo. No wonder they changed it the very next year.

This was the logo of the Cincinnati Bengals when they joined by AFC Central Division. We must say this logo looks a lot better and more professional than the former one. It’s a 2D helmet in the signature orange color of the team, with the wordmark ‘Bengals’ on it. This logo was used for 10 years straight. Since the letters on the helmet are bold, even preschoolers won’t have much of a problem filling it.

This particular logo was introduced in the year 1981 and was used until 1989. The franchise removed the wordmark “Bengals” and gave some majestic tiger-like stripes to it. The faceguard became a lot bigger, the outlines more defined and the orange darker. And it looked every bit cool. 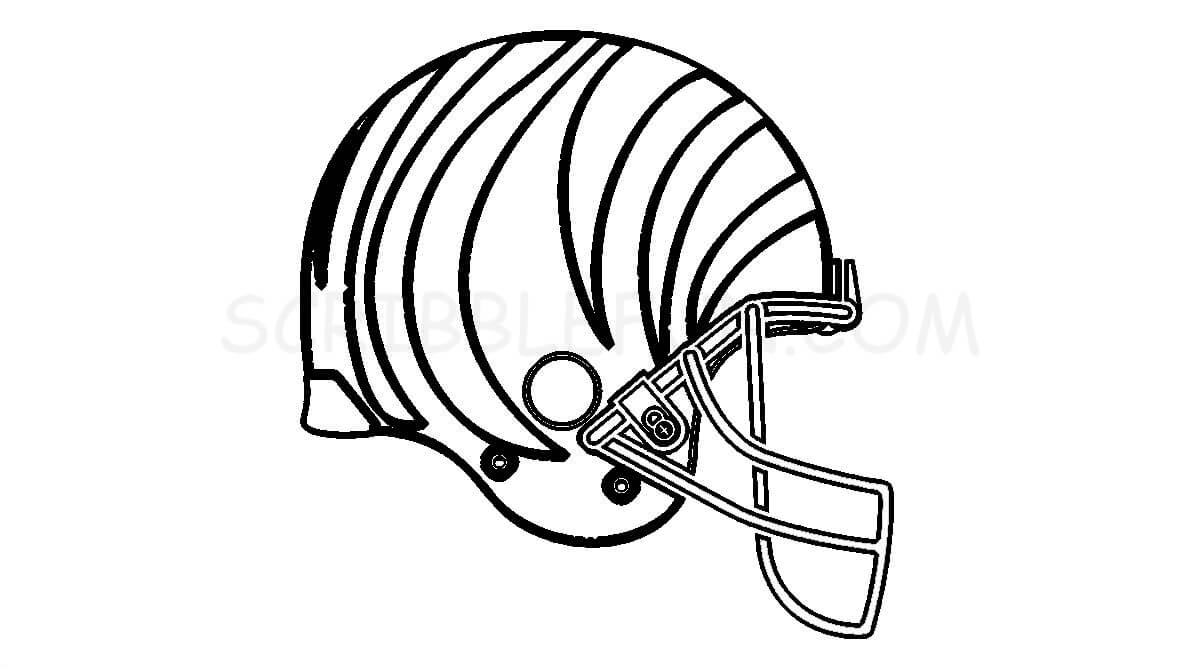 In the year 1990, this American football team franchise introduced another logo, and this time again, it was a helmet. The faceguard became more modern and the winding stripes were also changed. The changes were minor but looked promising nevertheless.

In 1997, Cincinnati Bengals introduced a completely different logo. This time, they used the face of a Bengal tiger as a logo. It looks like the tiger is about to leap and land on its paws. 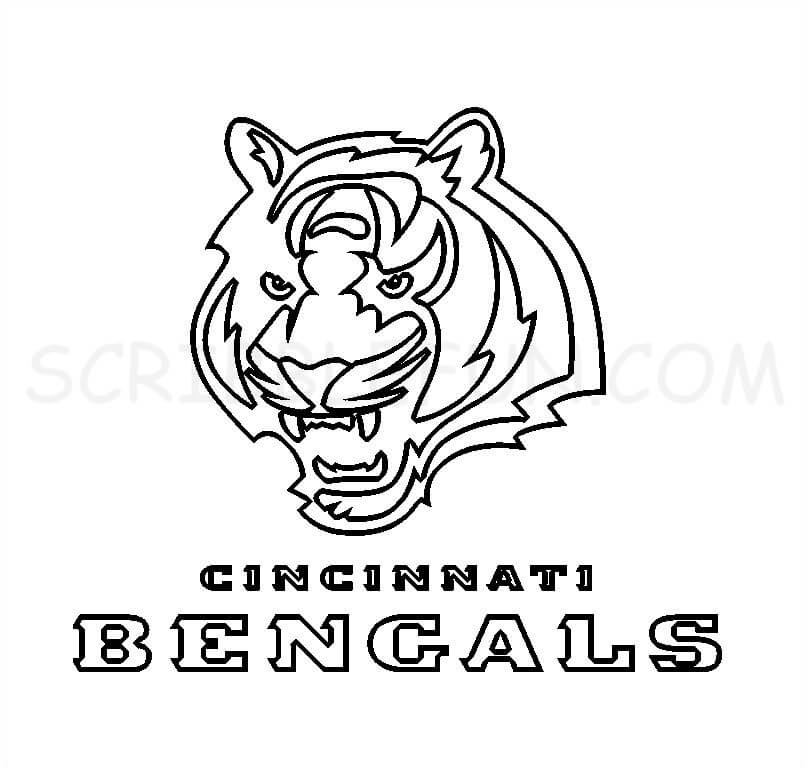 Here’s a complete picture of the 1997 logo along with the name of the team. This is by far the best logo of Cincinnati Bengals. It captures the aggression and ferocity of the Bengal tiger extremely well. While coloring the image, make sure you don’t make the entire face orange. The outline of the face is white, to separate it from the other elements. 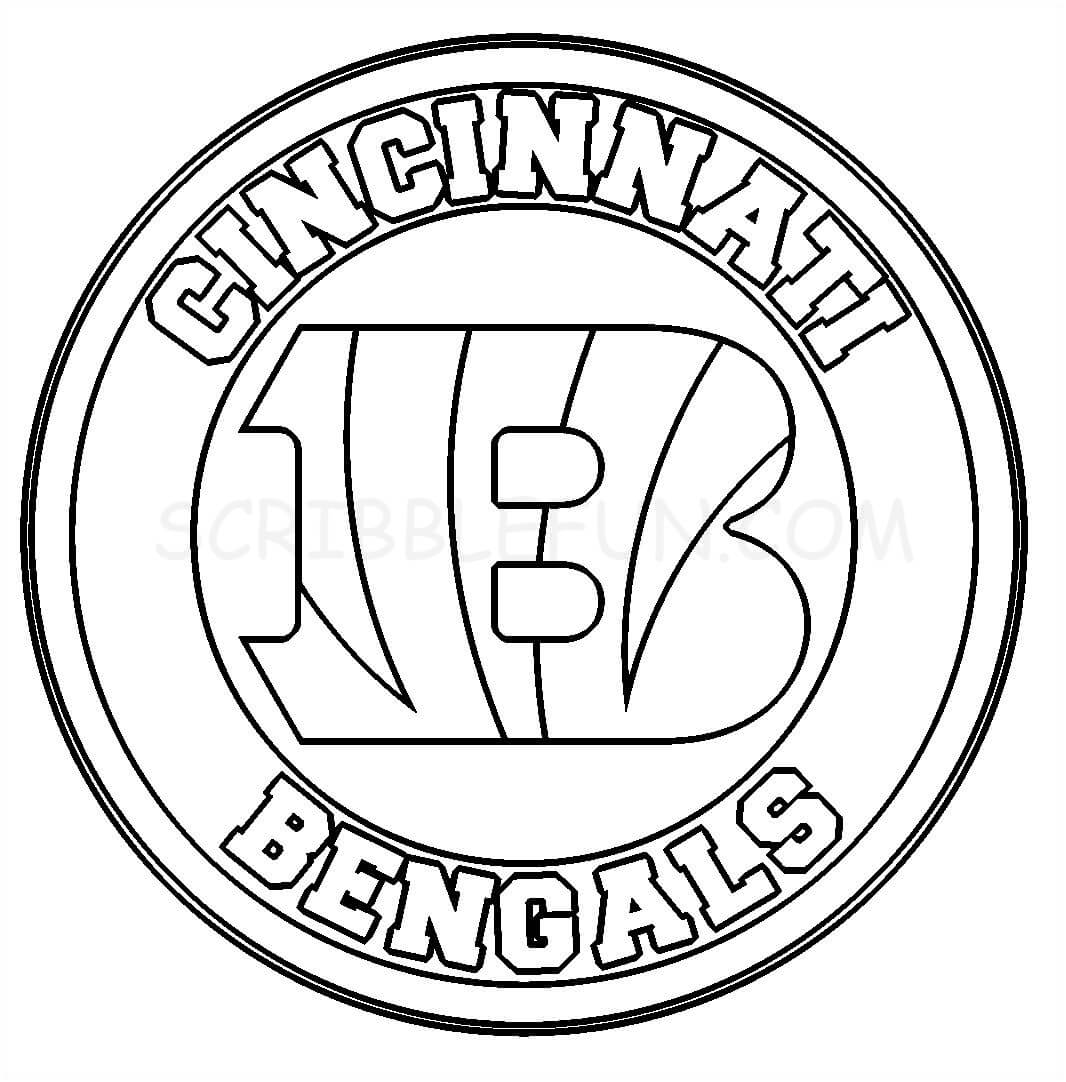 The team may not have lifted a Super Bowl trophy as of now, but that doesn’t mean they haven’t tasted success at all. Cincinnati Bengals have won the AFC Central division 5 times, which isn’t bad at all. They even claimed AFC North titles in the years 2005, 200, 2013, and 2015. Maybe this year, they’ll win the NFL championship as well. 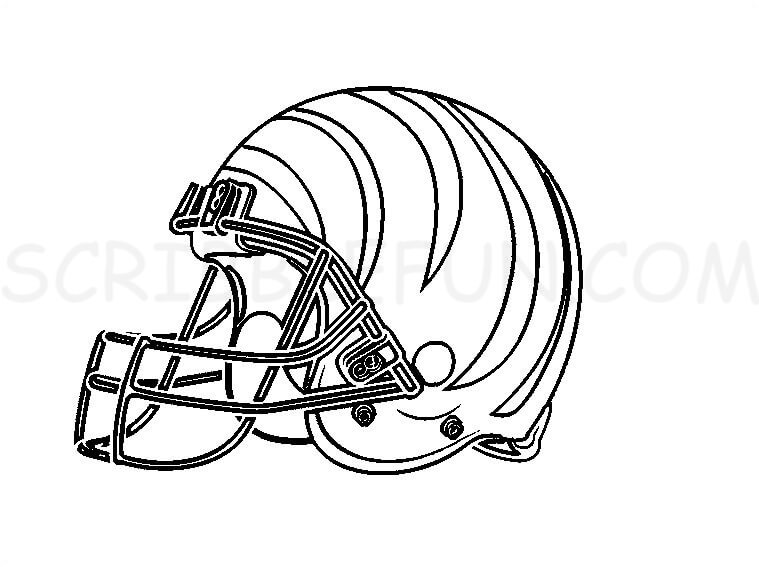 The helmets of Cincinnati Bengals always have their signature colors black and orange. Earlier, they even included the word “Bengals” on their helmets, but later removed it. This is the current helmet used by the team. It’s bright orange in color with black stripes, to give an appearance of a tiger.

This is the current logo of Cincinnati Bengals which the franchise has been using since 2004. It’s a pretty simple design, given the earlier logos we’ve seen. The brand adopted the letter B of the club’s nickname and covered it with tiger stripes. We loved how the designer kept the top and bottom of the logo symmetrical. It looks very proportionate and neat. 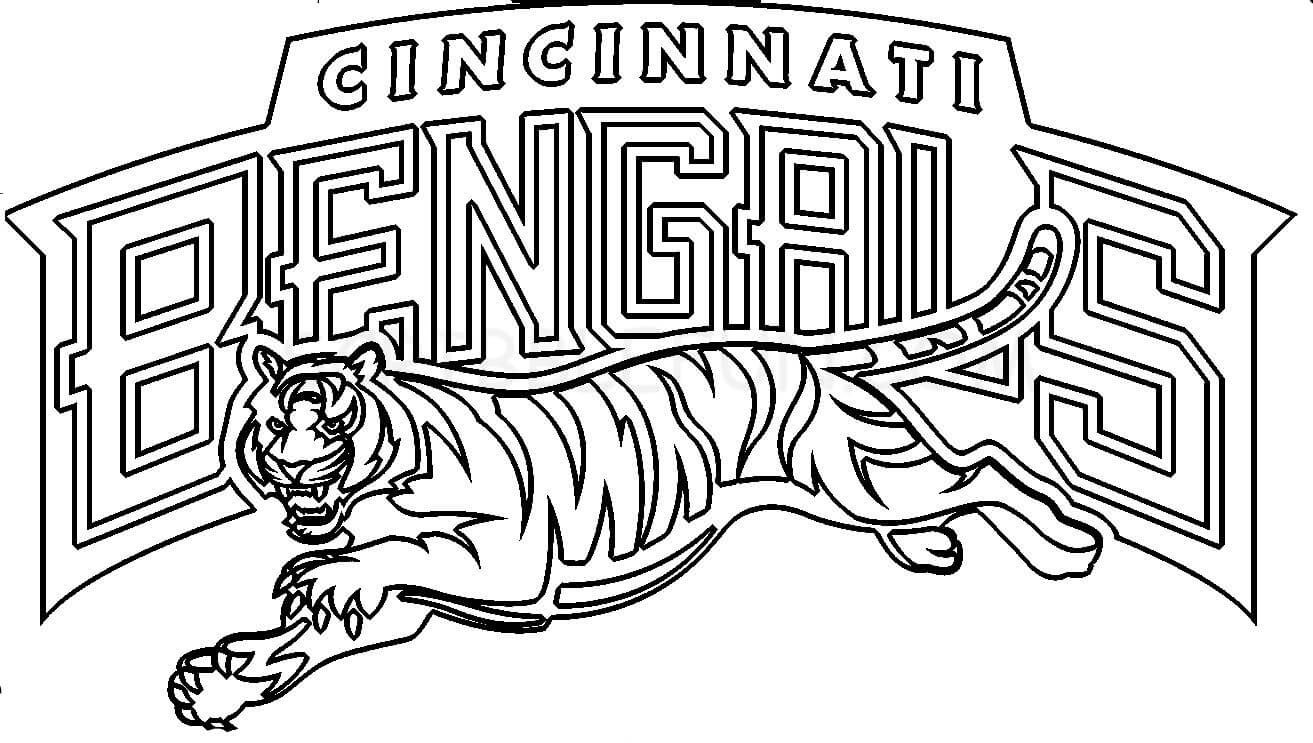 This coloring image captures the grandeur of the Cincinnati Bengals football team like no other. It features a majestic royal tiger ready to pounce against the wordmark ‘Cincinnati Bengals’. You can print out this photo to make a poster or banner of your favorite team. Just make sure to use the signature colors of this team- orange and black. 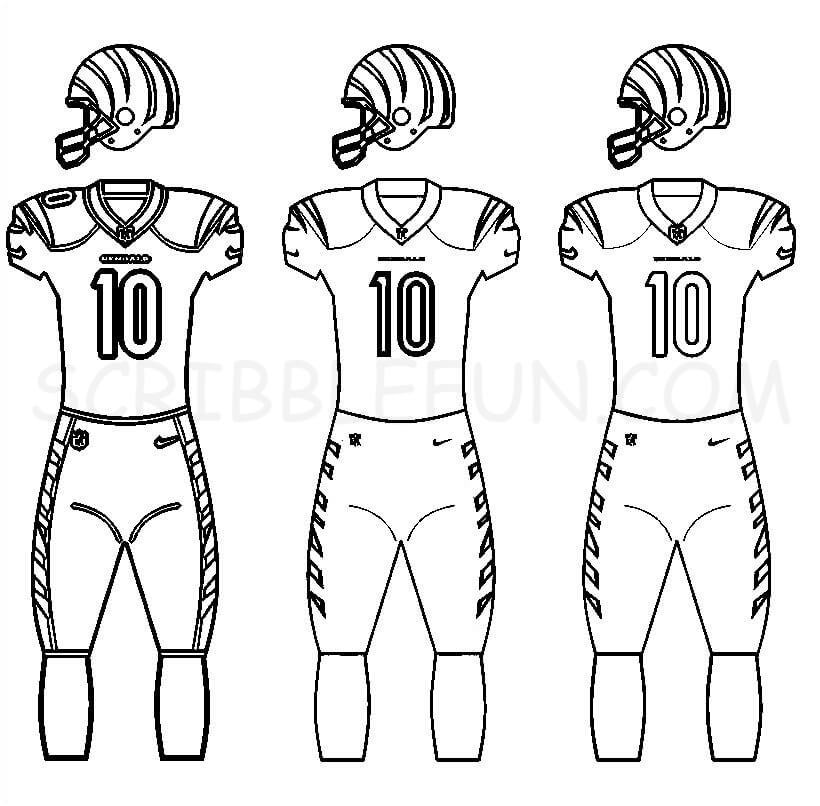 Here’s a coloring picture of the uniform the team used from the year 2001 to 2020. The color of the uniform underwent a lot of changes over the years, but the print and concept have been the same. However, in 2021, the franchise introduced a new uniform, which retains the signature colors and striped helmet. Now it’s up to you which colors you want to give to these uniforms.

We hope you enjoyed our collection of Cincinnati Bengals coloring pages. We don’t know who’s going to lift the trophy this year, but our best wishes are definitely with this team. Whom are you rooting for this Super Bowl?