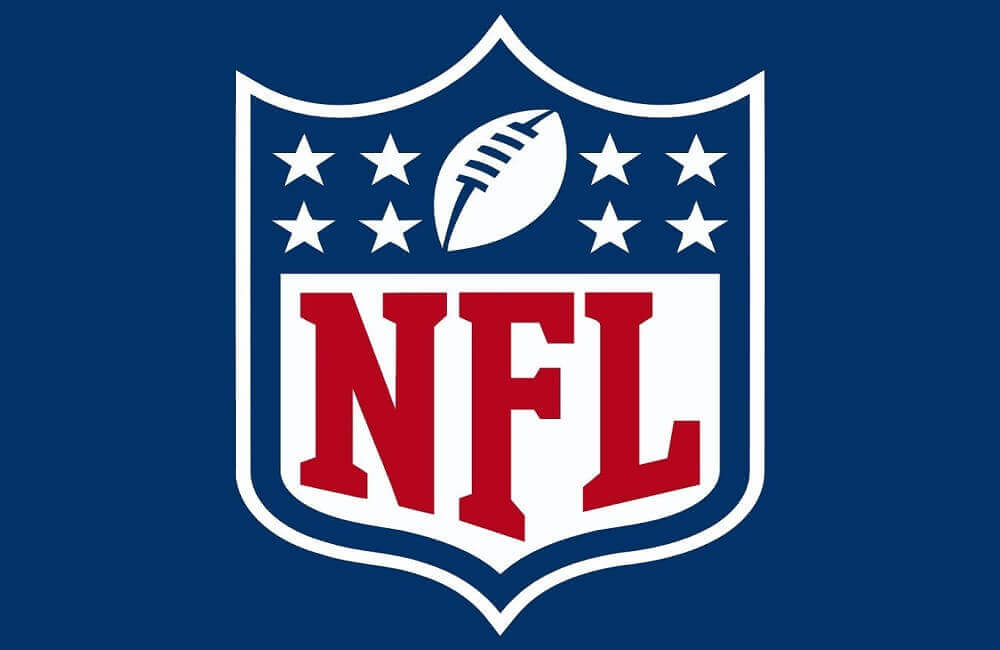 Hello children! Are you feeling too cold in this chilly winter season? You can keep yourself warm by wearing layers and drinking hot beverages. Another fun way to keep the coldness at bay is by engaging in some sporting activities. That’s why today we have brought for you a collection of National Football League (NFL) coloring pages printable.

One of the major professional sports leagues, the NFL comprises 32 teams with 16 teams each for National Football Conference (NFC) and the American Football Conference (AFC). Let’s get to know more about the teams through their logos with this collection of NFL coloring sheets to print.

The United States oldest running professional football team, the Arizona Cardinals are part of the National Football Conference (NFC) West division. Nicknamed Bid Red, their name and their logo take inspiration from the songbird, the northern cardinal. Use their team colors, cardinal red, black, and white to color this logo, and include yellow for the beak.

Based in Atlanta, Georgia, the Atlanta Falcons compete under the NFC South division. Nicknamed as “The Dirty Birds”, the Atlanta Falcons joined the NFL in 1966 and their home stadium is Mercedes-Benz Stadium which opened in 2017. The stylized icon of a falcon is designed to look like the capital letter F and make use of all the team colors of red, white, silver and black.

Two times Super Bowl champions for 2000 and 2012, the Baltimore Ravens compete under the American Football Conference (AFC) North division. Holding a perfect record in multiple appearances, the Baltimore Ravens is owned by Steve Bisciotti and is valued at $2.5 billion. Their raven head logo is colored in black, purple, and metallic gold and includes the capital letter B. Since 2000, they have qualified for ten NFL playoffs.

Winner of three Super Bowl Championships for the years 1997, 1998, and 2015, the Denver Broncos play under the AFC West division. Eight players from the Denver Broncos are enshrined in the Pro Football Hall of Fame. Their logo showcases a running horse head with a flying mane and aggressive eyes. You can color the logo in orange, navy blue, and white. For the team name, color the larger font “Broncos” in navy blue and the smaller font “Denver” in orange.

Competing as part of the AFC East division, the Buffalo Bills hold two interesting records – winning four conference championships back to back as well as losing four consecutive Super Bowl games from 1990 to 1993. Fill their charging bison logo designed by Stevens Wright, an aerospace designer, with their team colors navy blue for the bison, red for the long stripe, and leaving the horn white.

Member of the NFC South division, the Carolina Panthers are among the few teams to own the stadium where they play their games. The Bank of America Stadium also acts as the team’s headquarters. You can admire the aggressive-looking panther logo while you print and color it in black, panther blue, and silver of their team colors. They have their fiercest rivalries with Tampa Bay Buccaneers and Atlanta Falcons.

The Chicago Bears compete under the NFC North division and have the most victories among the NFL franchise. Also known by their nickname, Da Bears, they have the most players among any teams to be included in the Pro Football Hall of Fame. Since their founding in 1920, their biggest rivals are the Green Bay Packers. You can make a wish to be a part of their team when you grow up, while you color their wishbone “C” logo in burnt orange with white trim and navy blue for the border as well as the bear head.

The Cincinnati Bengals, competing under the AFC North division, have not won a Super Bowl championship yet. They are among the twelve teams in the NFL to not have done so. With their mascot as the Bengal tiger, referred to as Who Dey, their logo is capital B in orange color having black stripes.

The Cleveland Browns are the only team in the NFL to not have a logo on their helmets. In lieu of a logo, their helmet is used as Cleveland Browns’ official logo. They compete under the AFC North division and at 16 seasons, currently holds the NFL’s longest active playoff drought. Take your time coloring the logo in orange and brown.

For the past 12 years, the Dallas Cowboys have been the most valued NFL team, according to Forbes. At $5 billion in 2018, they are the first franchise to achieve that value and hold the record for the highest revenue for a U.S. sports team with $620 million in 2014. The Dallas Cowboys are tied in second for most Super Bowl championship with five wins. Their star logo is blue in color with a white outline and blue border. 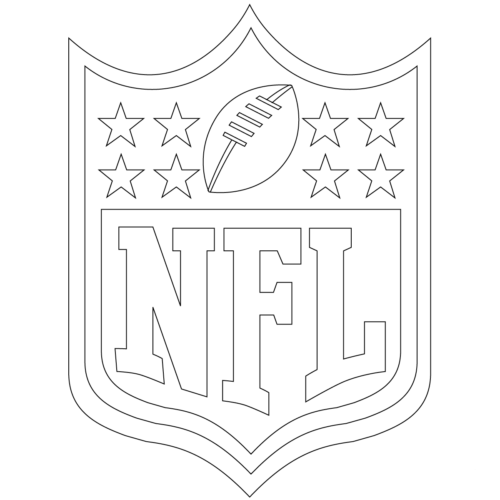 The National Football League (NFL), formed in 1920, represents American football at its highest professional level. In 1966, the NFL started working on a merger with the American Football League, giving rise to the first Super Bowl in that year. The NFL – AFL merger was finalized in 1970 and the Super Bowl has since become one of the biggest sporting club events. Color this NFL logo using blue and red and leaving the white portions blank.

The only non-profit professional sports team in the United States, the Green Bay Packers competes under the NFC North division. This community-owned team is the third-oldest franchise in the NFL and at 13 wins, they have the most league championships in NFL history. Get dark green and gold color ready before you print this page and start coloring the oval “G” logo.

Competing under the South division of the American Football Conference (AFC), Houston Texans was founded by Bob Mx Nair and first played in 2002. The logo depicts the head of a bull, resembling the state of Texas and using the color scheme of the Texas flag with a lone star as the eye.

This fierce-looking logo belongs to the Jacksonville Jaguars, one of the four teams in the AFC South division. It is owned by Shahid Khan with its team value estimated at $1.48 billion according to Forbes 2015. The logo features all three-team colors: black, teal, and gold.

As evident from their name, Kansas City Chiefs are based in Kansas City and compete as part of the AFC West division. They won the 1969 Super Bowl IV championship. With white, red, and gold as their team colors, their logo features an arrowhead with the interlocking initials in red.

Representing the University of Texas, the Texas Longhorns compete in the NCAA Division I Football Bowl Subdivision as a member of the Big 12 Conference. The team’s logo is an orange longhorn as their team colors are burnt orange and white.

Founded in 1959, the Los Angeles Chargers was known as San Diego Chargers for over fifty years post their move to San Diego in 1961. In 2017, they returned to Los Angeles. A total of eight players and a coach from the team are enshrined in the Pro Football Hall of Fame. This arch-shaped lightning bolt logo has three colors of its four-team colors.

Miami Dolphins holds the record for being the only team to achieve National Football League’s perfect season – remaining undefeated and untied – in their 1972 campaign when they won the Super Bowl championship. Team colors aqua, orange, and white are a part of their logo – a dolphin against the sun backdrop.

Based in Minneapolis, the Minnesota Vikings are a member of the National Football Conference (NFC) North division. Purple, gold, and white are their team colors which are all used for their Viking warrior logo, designed by Los Angeles Examiner cartoonist Karl Hubenthal.

New England Patriots, based in the Greater Boston region, is NFL’s one of the most successful teams. With record ten Super Bowls appearances, they have won five times. Donning the red, white, and blue colors, their logo shows a Minuteman with a tricorne hat extending into a banner design.

Founded in 1966, the New Orleans Saints began playing in 1967. They have appeared in only one Super Bowl in 2009 which they went on to win. Their logo is a fleur-de-lis, a stylized motif of a lily, consisting of their team colors – old gold, black and white.

New York Giants is a member of the NFC East division and one of the oldest teams. With eight league championships, four during pre-AFL-NFL merger time, and four Super Bowl championships. Their logo is a simple lowercase initial “NY” in team colors dark blue and red.

Originally a member of the American League (AFL), the New York Jets became a part of the NFL after the merger. They are one of the three teams to have won the championship in 1968 in their sole appearance. You can use their team colors, hunter green, and white, to fill in appropriate colors in this logo.

Playing under the NFC East division, Philadelphia Eagles, are among the best in attendance in the league. They have several intense rivalries, the oldest being with the New York Giants. As per their name, their logo is an eagle highlighting their team colors of midnight green, silver, and white.

Oakland Raiders was founded in 1960 and has won three Super Bowl championships. The shield-and-pirate logo has remained almost unchanged with only minor tweaks since it was first introduced. They will be relocating to Las Vegas upon the completion of the stadium under construction now. You can use their team colors, black and silver to color this logo, leaving the name Raiders, face, and the crossed cutlasses blank.

One of the oldest in the AFC, Pittsburgh Steelers has the most Super Bowl championships among all NFL teams, at six wins. Their logo is based on the Steelmark, owned by the American Iron and Steel Institute (AISI). The three different colored asteroids – hypocycloid with four cusps – represent coal with yellow, iron ore with red and scrap steel with blue.

Competing under the NFC West division, the Rams is the only franchise to win three championships, each representing different cities – Cleveland, Los Angeles, and St. Louis. After twenty years in St. Louis, the Rams relocated to Los Angeles in 2016, beginning the second Los Angeles Rams era. The logo has a blue and white color design.

Tennessee Titans compete under the AFC South division and are based in Nashville. They were earlier known as Houston Oilers when they first played as a member of the American Football League in 1960. Their major rivalry is with Jacksonville Jaguars. Their logo design is a circle with stars and a comet trail, which uses all their team colors, navy, titans blue, red, silver and white.

You must be raring to go join your own team when you grow up, now that you have gone through this collection of NFL coloring pages to print. If you get good grades as well as participate and excel in sports in your school, you might be headed for an American football future. In the meantime, you can print these coloring pages and correctly identify and color all the logos.