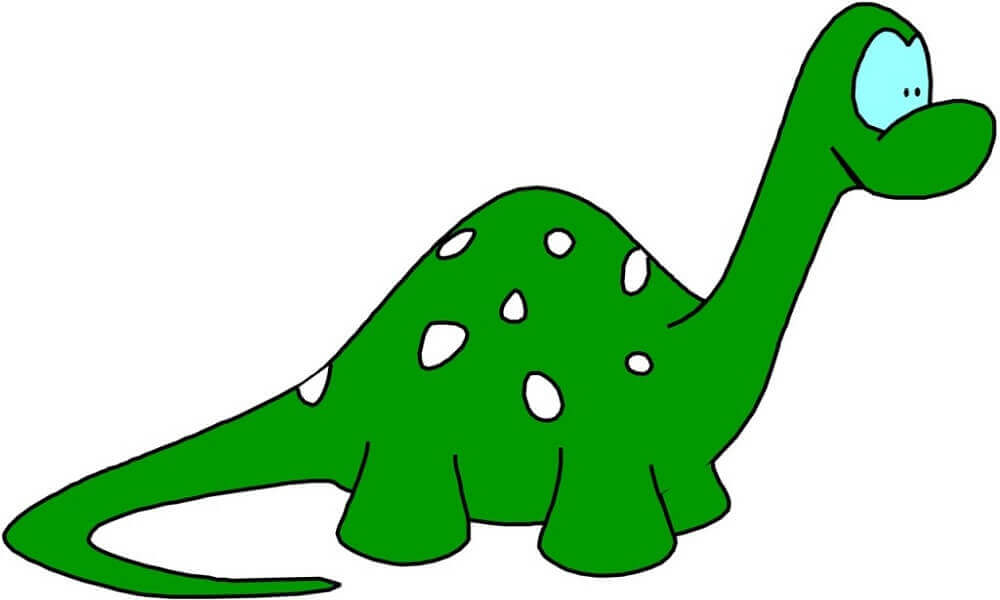 Good day young readers! Two to three hundred million years ago, Earth was not the way we know it. Mammals did not exist. In fact, possibly the most ferocious creatures trampled the terrains. This was the Triassic era ruled by the terrible lizards – the Dinosaurs!  The name ‘Dinosaur’ itself is derived from Ancient Greek words that add up to mean “Terrible Lizard”. Quite rightly so! Not all of them were carnivorous, but even their vegetarian family members looked ferocious. If you have watched Jurassic Park, you know what they can do! But cartoonists have turned them into the cute creatures you will see here. Let’s check and fill some free printable dinosaur coloring pages. You can check out all of free dinosaur coloring sheets to print below.

Jurassic Park movie made these prehistoric reptiles world famous. Then cartoonists turned them into less ferocious creatures using their imagination. This made them appealing to the children. Here is one such cartoonist impression of a dinosaur. Color and show how it should look!

Meet Tyson. He is a friendly dinosaur living in the Cartoonia continent in a distant planet. Many of the species that we see around us are believed to be evolved from these reptiles. The birds would not exist if dinosaurs did not. What do you think Tyson would evolve into?

Tyson’s friend Rudiger is a Tyrannosaurus Rex. But unlike Earth’s T-Rex, Rudiger is friendly, though he looks wrathful every time. This particular species is the reason people believe human would not exist if dinosaurs existed. But if T-Rex were like Rudiger, they would make good pets!

Dinosaurs were typical reptiles. That means they were oviparous, that is, they laid eggs and young ones hatched out of them. Different species laid different numbers of eggs. Look at these hatchlings – don’t they look adorable?

‘The Land Before Time’ is a famous animated movie based on the Jurassic Era when famines forced the dinosaurs to migrate. On the journey to the Great Valley, Littlefoot and his friends come across many adventures. Color this happy adventure for Littlefoot!

Meet Ducky, Littlefoot’s friend. Ducky is a Bigmouth, or technically, a Saurolophus. Saurolophus was an herbivorous species that could walk on two (bipedal) or four (quadrupedal) legs, and were characterized by the spike-like crest projecting from the skull.

Being extinct and prehistoric makes dinosaur a creature famous among kids. They believe dinosaurs to be deadly as well as dangerous. But brave kids don’t fear dangers; in fact they welcome it (including me)! In reality, many dinosaurs were shy and preferred staying in their own herds away from dangers.

One big mystery in dinosaur history is their extinction – how did they vanish? Here we see a T-Rex fighting a slower Stegosaurus, and eventually killing it. But in the background we see something stronger than T-Rex. The volcano unleashed Mother Earth’s wrath. Maybe T-Rex killed the weaker ones to extinction, but who killed the T-Rex? What do you think?

Fossils have shown some baby dinosaurs in eggs. They looked like the miniature forms of their parents. Here we are seeing a happy looking cute baby dinosaur just hatched out of egg. Color him up as per your imagination.

Dinosaurs can be classified on the basis of number of limbs they use in locomotion. One group is of species that walk on twos and are called bipedal type. The other group has quadrupedal locomotion and walk on all fours. Here is one doing the bipedal locomotion. What is your type of locomotion?

Not all dinosaurs are like T-Rex. Some are peaceful and vegetarian, like the parasaurolophus here. They walk on fours, but stand on rear twos to reach the leaves on higher branches. The cranial crest on the head is its signature feature.

Here’s a cute dino coloring page for you. When these reptiles existed, there were no mammals or amphibians or birds. Then how did the creatures come here around us? According to a theory, we all evolved from the dinosaurs. However, birds seem to be the most similar to them. Do you think you got your cuteness from one of these three?

Here, Callum, the friendly dinosaur is basking in the sun. The dinosaurs needed it as they are cold-blooded creatures. We mammals are warm-blooded, and our body can maintain its temperature by itself. But dinosaurs can’t, so they go under the sun when shades are cold.

Smiley, the funny dinosaur, is going to color some creatures in his coloring pages. See him holding a pencil-color! Isn’t he just cute? While he colors the other creature, you color him up. Show how he should look?

Iguanodons are debatably one of the most deeply studied dinosaurs. This herbivorous giant had toothless beak that was made of keratin, the same protein as our nails, and had teeth similar to an Iguana (hence the name).

Iguanodons could be both bipedal and quadrupedal, but here he is walking on all fours. Most probably, he is looking for food. With a beak-like lip and numerous regenerative teeth, they could chew hardest of leaves of that era.

Most dinosaurs preferred herds to avoid predators and ensure their safety. In every species, togetherness adds the strength. In this dinosaur coloring sheet, we see friendly dinosaurs playing and joyously spending their day. Let’s color their day with happiness!

What if I told you that the little one is older than the bigger dinosaur? Yes, it can be true. Dinosaurs came in many sizes. Fossils show that the smallest dinosaur was about 34 centimeters and largest around 34 meters. Can you imagine?

Dinosaurs were of various forms based on their morphology (appearance) and their anatomy (inside biology). Here we are seeing the flying Pterodactyl, the spiked-up Stegosaurus, and the huge Argentinosaurus. Don’t they remind you of a few animals alive even today?

The toys you see now are a result of rocks that preserved bones in fossil form. Paleontologists studied these bones and guessed the shape of these creatures. Toys can teach you about dinosaurs too. So color them up and find out how they might have looked!

Meet the first species of the dinosaur believed to have walked on Earth – the Eoraptor. They used to be about 100 centimeters in height. They were light and weak. Based on the structure of their teeth, they were believed to be omnivorous. As they were small, they were not a threat. But evolution-wise, they were the source of the terror of millennia!

Most of the dinosaurs had thick skin and tough flesh. So the predators needed sharp and strong teeth to kill and eat them. Such physical weapons made the carnivorous dinosaurs look ferocious and lethal. They had to be so to survive against malnutrition. Even the hunting instincts made them a skilled killer.

Predators are meant to attack, but it is up to the prey whether it goes down easily, with a fight, or stays alive. Here in the showdown between a T-Rex and a Stegosaurus, the competition is an open one. The plates on the back and spikes on the tail make it difficult for the predators to kill and eat the Stegosaurus.

This gentle looking giant is a Dreadnoughtus. This particular species used to be on an average 26 meters long and weighed 38 tons. They grazed peacefully in a herd. They were huge, but their weight slowed them down. They served an easy target for big carnivores when found alone. But I bet this much of meat would at least give the predator some stomach problems!

Most of the dinosaurs were herbivores as there was immense vegetation on the Gondwanaland. Some carnivores were present too, and they too had abundant food resource. The herbivorous diet included leaves and grass. Trees were not evolved into their flowering forms like today, so they did not get fruits!

Most infamous dinosaur and famous predator Tyrannosaurus Rex was the biggest carnivorous menace of the Jurassic era. The bipedal carnivore had a big heavy head balanced by a long heavy tail. It is believed to have the highest biting force of any terrestrial creature ever despite not being the largest theropod.

Marsh is another friendly dinosaur that loves to play with kids. His face is never seen without a smile. Don’t worry; he is not like other dinosaurs. He is vegetarian and loves cookies! Color him in the sweetest tones you can find!

Herbivores stayed in herds to prevent ambushes by predators. Iguanodons are not confirmed to be social, but there is a slight possibility that they were. Being herbivorous meant no claws and sharp teeth. However, they had large thumb spikes to defend against predators.

A highly-appreciated Steven Spielberg science-fiction movie took the box office by storm by showcasing dinosaurs present in today’s world. The dinosaurs were accurately created by computer-generated imagery (CGI), and it looked so true that many kids started dreaming about becoming paleontologists (even me)!

This particular species is recognized by its bizarre head adornment. The cranial crest usually was hollow. This species belonged to the group Hadrosaurid, which roughly translates to duck-billed. Being an herbivore, the duck-bill helped in breaking the leaves and numerous teeth at the sides of mouth facilitated chewing.

No, it is not a bird. It is just a reptile that has wings (just like a bat is a mammal with wings, not a bird)! And yes, technically, this is not a dinosaur too, as the dinosaurs comprise only of reptiles that evolved from Saurischia and Ornithischia groups. But no doubts, they form the common link between dinosaurs and birds.

Two Brachiosaurs are looking at their predator T-Rex, but they look fearless. They have a reason to be – they are together. When T-Rex roars, one of the Brachiosaurs just stands up, and T-Rex realizes that he needs to hunt elsewhere, as they are too big to bring down!

One of the most enormous dinosaurs, it belongs to the group Sauropods. However, what made it different was that its neck was proportionally longer as compared to its tail. It was heavy, hence slow and needed to be in a herd of at least 2 to stay safe against the faster predators.

Another very famous species is the Stegosaurus. Its striking features are the bony plates all along its back and spikes on its tail. This provided sufficient amount of defense against the predators. This large, slowly built, herbivorous quadrupedal was incapable of raising its body, hence fed on low shrubs and grass only.

This bipedal carnivore is king of the Jurassic Park, metaphorically and literally. The most ferocious predator to have walked the earth had marked the dinosaur world with its killer instincts and terror. The killer instincts were higher than other predators due to its heightened senses and a sharper mind. In fact, ‘Rex’ in Latin means ‘King’. Hence the name I guess!

Let’s take some time to appreciate the work of those paleontologists whose dedication helped us to understand these creatures better that are cute in imagination but extinct in reality. There are many theories about the extinction of these creatures – meteorite fall, massive volcanic eruptions and earthquakes, climate change, etc. What do you think happened in that era? Think about it while coloring these free printable dinosaur coloring sheets. And don’t forget to share your favorite Dinosaur coloring pages with us. And don’t forget to check out our dragon coloring pages.