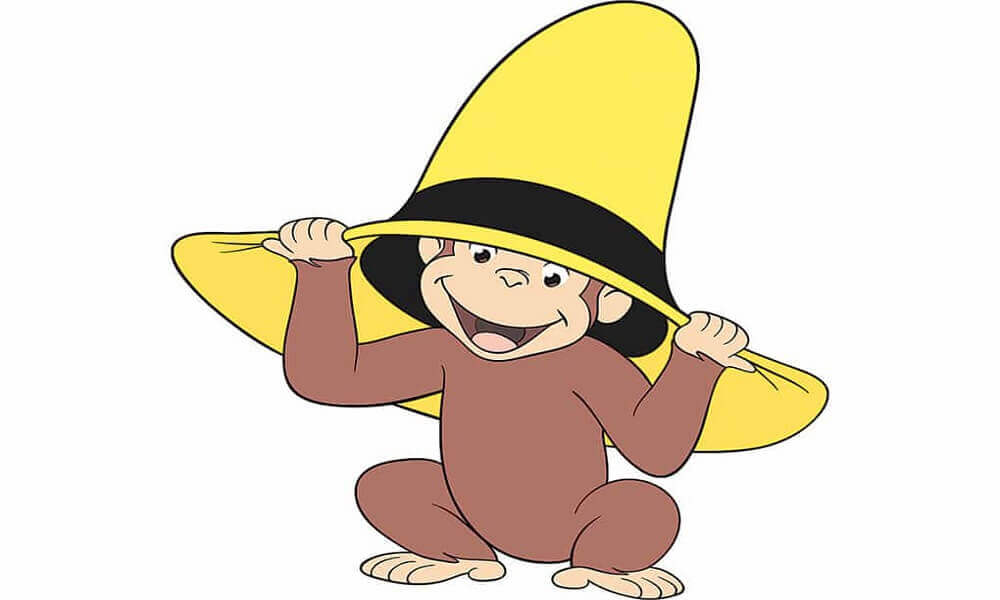 Cute, adorable, and funny Curious George, the protagonist of the animated series of the same name, has been capturing the imagination of kids for decades. The goal of this series, which is aimed at children aged 3 to 5, is to inspire kids to explore engineering, math, and science in the world around them. The series is based on the book by Margaret Rey and H.A. Rey of the same name, in which a monkey named George is brought from Africa to live in the giant city. George also has a friend, the Man with the Yellow Hat, who comes to his assistance, when he’s fixed in a tight spot. Today, we’ve got our curious little readers some free printable Curious George coloring pages. All these Curious George coloring sheets illustrate the antics of this adorable monkey. Take a look!

This coloring page shows the funny George blowing bubbles, teaching kids about science in the process. I think he got this bubble blower from outside Ted’s house, where he often hangouts. Or did he snatch it from the shopkeeper?

This coloring page shows George writing down his name on the cake. It was George’s birthday, and he took it upon himself to decorate and cake. Everything was going fine until George misspelled the name. But the smart chap George is, he quickly corrected it.

This coloring page shows Curious George playing with butterflies in his house garden. However, he looks a bit surprised seeing the butterflies. Is it seeing them for the first time? Or is he enthralled by its beauty? We’d love it if you could write a story to go with the picture.

It’s summer, and Curious George is making the most of it by eating ice cream. But that’s pretty large ice cream, and we’re wondering how George is balancing it. It can fall at any moment, and it has started dripping too! Can you count how many scoops of ice creams are there? And make sure you give different flavors to the ice cream.

This coloring page shows our little cutie George increasing his knowledge by reading. Rather, we think he’s researching something, which is why he has so many books on the table. Is he trying to learn the marvels of science?

Who knew Curious George could even fly an airplane? At least we’re seeing him flying it for the first time. And he looks jubilant doing it! Where do you think is he heading? Is he going back to Africa? Or will he come back after a short tour?

Apart from planes, Curious George can even fly with the balloons? And in the process, he’s also teaching the kids the beauty of science. It shows that hot air in the balloon causes the balloon to rise as it’s lighter than cold air.

Here’s a cute alphabet coloring page for our littlest readers. They’ll get to learn the spelling of George along with coloring the sweet image of the monkey. And whose hat is George wearing here? Is it Ted’s hat?

Where is Curious George going with Allie, that too in such cold weather? The duo is dressed in their best winter clothes and seems to love winter. Probably it’s Christmas, and they’re going to check out the lightings.

Here’s a coloring page of Mr. Bloomsberry, Junior Bloomsberry’s father, and George’s friend. He’s a friendly old man, who cares for everyone as they’re his own. He appears in the show wearing a white shirt and pants, with hair tied in a pony.

George is indeed curious, and it has been reaffirmed with this coloring page. After trying out so many things, George now wants to become a fireman. He has even released the water, just for the sake of trying his hands on it. And on the second image, he is seen sitting on top of the firetruck.

We’re totally loving how Curious George is looking at this flower! You can see the love and affection in his big eyes. Probably it’s spring, and new flowers are cropping up. So how about filling this coloring image in some bright hues?

This adorable coloring page features Curious George with his friend and companion Ted Shackleford. It was Ted who tricked and brought George from Africa to his house. Ted is often seen facilitating the adventures of George.

We’re rounding up this article with another coloring sheet, featuring the man with the yellow hat, or Ted Shackleford. Ted always appears on the show wearing a bright yellow suit accessorized with a wide-brimmed hat and brown boots.