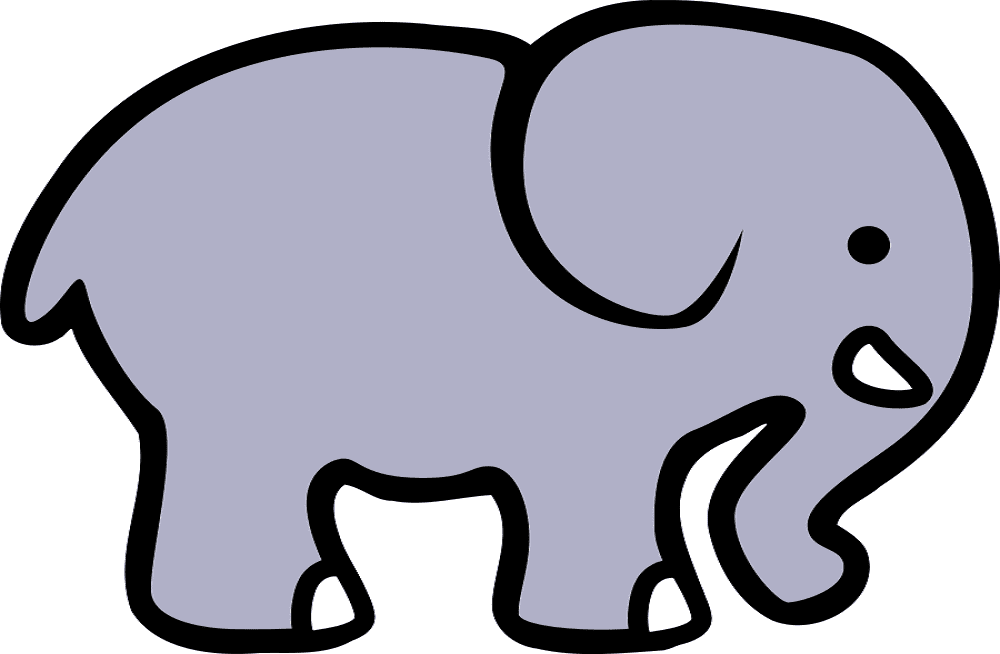 Hello kids! After the collection about the tallest living animal on land, giraffe, today we have coloring pages inspired by the largest living land animal. You guessed it right, we’ve got you a collection of free printable elephant coloring pages.

Apart from being the largest land animal, elephants are also one of the most widely known animals, recognized and largely depicted in popular culture. You must have seen them in various wildlife videos, in zoos or on safaris. They have been part of films about ancient civilizations and emotional stories like Disney’s Dumbo, about which we had done a coloring page collection earlier this year. Let’s get ready now and explore the world of this giant creature through this collection of elephant coloring sheets to print.

Inhabiting the regions of the Indian subcontinent and Southeast Asia, the Asian elephants or Asiatic elephants are grey in color, with depigmentation causing the lighter color on the ears, head, and trunk. Get your colors ready to fill this large animal with accurate colors.

Greeting you with those cute eyes is this baby elephant. Elephant mothers generally give birth to their young ones after a gestation period of around two years. Being so young, this calf – baby elephants are called calves – have reddish to brownish hair.

Grooming and teaching the young calf to look after itself, this mother is taking proper care of her baby. It will take a year for the calf to fully develop its abilities to drink and feed as well as groom itself. The young elephants are the apple of the eye of an elephant’s family group.

Twisting and turning its trunk, this cartoon elephant seems to be trying to communicate something. While you try to guess what it is saying, let’s inform you about the elephant trunks or proboscis which is one of the most important appendages for the animal. A fusion of the nose and the upper lip, the trunks have no bones and very little fat, comprising mostly of around 150,000 separate muscle fascicles.

Elephants have been used by humans in several forms through ancient times up to this day and age. Aside from being used for tourism purposes, elephants have long been used in circuses for people’s entertainment. As you can see, this elephant is doing one of the tricks taught to perform for the public who have come to the circus.

A fictional character based on an elephant, Colonel Hathi was invented by Rudyard Kipling for his famous two-part books, “The Jungle Book” and “The Second Jungle Book”. Colonel Hathi, part of the Mowgli stories in the collection, is a bull elephant that lives in the same jungle as the lead character Mowgli. Hathi translates to “elephant” in the Hindi language.

A string of pearls crowned on her head that is styled with a beautiful flowery bow, this baby elephant is looking gorgeously cute. Doesn’t she look like the prettiest elephant girl in the world? Add colors to her sparkling beauty.

Another character and story inspired by an elephant, Dumbo was first written as a book by Helen Aberson and Harold Pearl. It was made into an animated film by Disney in 1941, which was remade into a live-action film in 2019. The story revolves around an elephant born with giant ears which he later learns to give him the power to fly. You can get to know more about the story by checking out the Dumbo coloring pages.

From D for Dumbo we are now moving ahead to the letter E and in this collection, E stands for elephant. Get creative with your coloring skills as you fill this illustration of an elephant doing a difficult trick of standing with all four legs on a ball.

After waking up early in the morning, both the elephant and the dog have agreed to go out for a little jog. Something curious seems to have caught their eyes along the way. You can imagine what it must have been, while you print and color this page.

Here’s a fun activity for you to help put some colors on this coloring page. A particular color is assigned to a particular number. Print the coloring page and color by number to get the colorful finished result.

Featuring an intricately designed elephant, this illustration has minute details drawn on each part of its body. An adult’s expert hand should be able to diligently fill in all the kaleidoscopic colors to this artistic and creative elephant illustration.

This elephant needs no help to look cute and adorable. Wearing this onesie and a fun expression on its face, you cannot help but smile just looking at the illustration. Print and fill this fun illustration with bright and happy colors.

Since elephants are the largest animals you can simply imagine the number of bones they will have in their bodies. There are about 326 to 351 bones that make up the skeleton of an elephant. You can get a closer look at the sturdy leg bones and the skull along with the tusk in the lower half of this illustration.

Roaming freely in the wild, this elephant has come to the open area to warm up a little. Being mammals, elephants are able to raise or lower their body temperature according to extreme environmental conditions. Feeling chilly inside the forest, it has come out to enjoy the sun for a while.

Young elephant calves are born completely prepared to be able to stand on their own few moments after birth. Young calves enjoy undivided attention from all the herd members and not just their mothers. This gives them a sense of wild freedom which lets them run and play with other calves without worries.

Due to its huge size, elephants do not have many predators. It is mostly the young calves who are often preyed upon by predators like tigers. That is why when there are predators around all adults circle the calves in their herds to protect them. Here you can see an adult elephant chasing away a tiger who got too close to the herd.

After the color by number elephant illustration, we have another fun activity related to elephants. This one will test your skills to connect the dots given in the illustration properly. Once you are done, you will find an elephant standing amidst flowers with the sun and the clouds in the background.

An interesting illustration depicting the cute and adorable side of elephants. This coloring page showcases an elephant lady dressed stylishly in a skirt with a bow in her head, sitting pretty while enjoying some pineapple.

Elephant ears are as big as they are to help the animals keep their body temperature down. They release heat through the numerous capillaries carrying warm blood present in the ear flaps. That’s why African bush elephants have the largest ears as they inhabit the hot region.

This is another artistic take on elephants, an elephant mandala. Throughout ancient history, elephants have inspired several design motifs in different cultures around the world.

Although an elephant’s skin is very tough, they are very sensitive. That is the very reason why you find elephants rolling in mud and dust. Here is an elephant playing with water, spraying mud over its body. This protective layer safeguards from serious sunburn.

An elephant with a birthday cake sounds like an interesting image. Now you can turn it into a birthday card for your family and friends. But first, print and color this page.

A friendly monster from the Cartoon Network’s “The Grim Adventures of Billy and Mandy”, Fred Fredburger is green in color and enjoys eating nachos and frozen yogurt.

To fully support the largest animal, their legs have to be pretty sturdy. Placed more vertically compared to other animals, about 60% of an elephant’s weight is borne by the front limbs with the remaining supported by the hind limbs.

Not realizing a staff member was working behind, this elephant took a dump. Now, it is getting scolded for covering the man in its dung. Try not to laugh while coloring this funny illustration.

It seems this has been a bad day for this elephant, who is getting back home earlier than usual, as it is feeling too grumpy. Comfort him with your warm colors.

The trunk of an elephant can do several things, ranging from breathing to touching, grasping and more. Showing you its dancing skills, this happy elephant is twisting and turning its trunk with joy.

Lumpy is part of the creatures called Heffalump, which resemble elephants in A. A. Milne’s book “Winne The Pooh”. Lumpy is lavender in color with purple hair on its head and has a stuffed alligator named Alvin.

The presence and length of tusks in elephants are dependent on the species as well as gender. Both male and female African elephants have tusks which are of similar length, with males growing thicker. Tusks in Asian elephants are present in male elephants with the female having either small tusks or none.

Making use of its versatile appendage, this thirsty elephant is drinking up the water by using its trunk, which can hold up to 8.5 liters of water in an adult Asian elephant.

That brings us to the end of this collection of elephant coloring pages printable. Hope you got a deeper insight into the world of the largest living land animals. Being the largest, however, has not made them invincible. In fact, elephants are among the animals that are at risk of becoming extinct. The International Union for Conservation of Nature (IUCN) has listed African elephants as Vulnerable and Asian elephants as Endangered. The poaching of the elephants for their ivory and meat as well as habitat destruction are the main threats to the survival of these giant mammals. You can play a part in safeguarding and protecting the elephants by learning and spreading information about their conservation. To start with, you can introduce this fun and informative collection of elephant coloring pages in your school and among your friends with the help of your teachers and other adults like your parents.