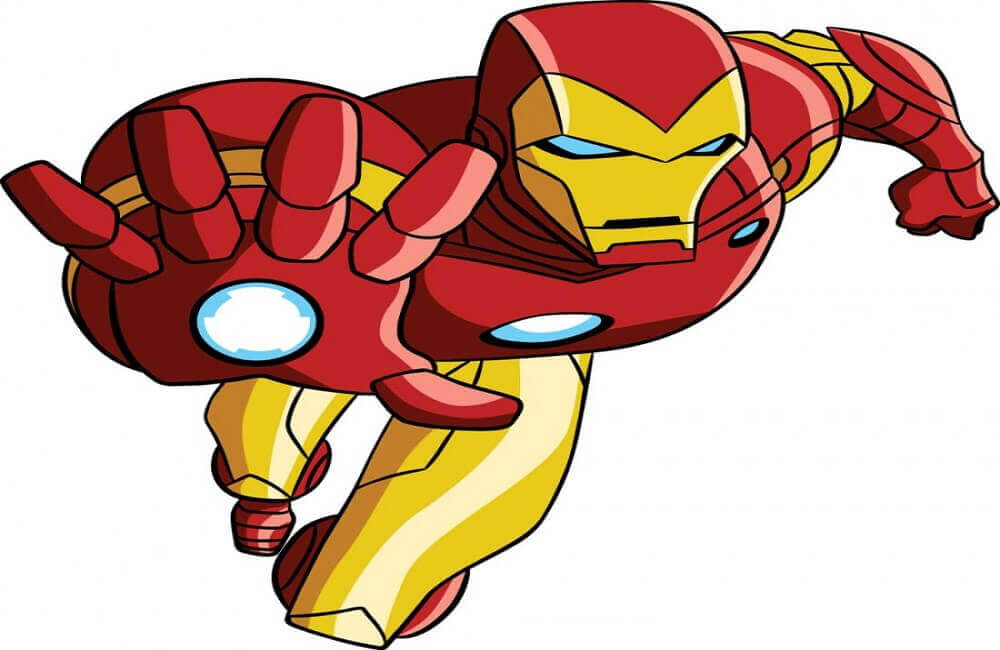 Hello children! You must be enjoying the warm summer. Perhaps even had a chance to watch some of the summer blockbusters released recently, like Avengers: Endgame. If you enjoyed going through our collection of Avengers coloring pages, today we have another special collection dedicated to one of the members of the Avengers team, Iron Man. Yes, we’ve got you free printable Iron Man coloring pages.

Part of the Marvel Comics, Iron Man first appeared in a 1963 comics and in 1968 he had his own stand-alone title. Iron Man became a part of the Marvel Cinematic Universe with the first Iron Man film released in 2008, which was a critically and commercially acclaimed. Let’s get inside the world of this superhero with this thrilling collection of Iron Man coloring sheets to print.

Even as a child Edward Stark showed he was a genius when at the age of just 17, he graduated from Massachusetts Institute of Technology (MIT).  He inherited the Stark Industries from his father and developed the suit armor which gives him his powerfully strong alter ego “Iron Man”.

Leaping up in the air, the two members of the Marvel Avengers team, Iron Man and Hulk are ready to fight and defeat their enemies. The illustration beautifully captures the thrilling element of the action in the sequence.

The sequel to the Iron Man, simply titled Iron Man 2 was released in 2010. Robert Downey Jr. reprised his role as Tony Stark / Iron Man. Illustrating one of the several fight sequences in the movie is this illustration.

Here is Iron Man in full action, trying to knock his opponent with this power-packed punch. If you look carefully, it does feel like he is trying to punch you or the person who is holding this coloring page. Take care while you print and color this page.

Bringing together the two superheroes from different comic worlds, this illustration showcases DC’s Batman and Marvel’s Iron Man, standing side by side. Be sure to note and color all the different elements of their individual suits.

Part of the Avengers team, both Iron Man and Captain America have had their individual film releases, highlighting their origin stories. They were first seen as part of the Avengers in the Avengers movie which was released in 2012. You can print this page and work carefully to bring out all their glorious details with your coloring skill.

Obadiah Stane, who worked and helped Tony Stark take care of the Stark Industries after his father’s death turned out to be smuggling arms and trying to take over the company himself. He used the technology available in the company to build himself a suit, calling himself Iron Monger. Part of the first Iron Man film, you can see them both battling it out in this illustration.

One of the several innovative features and genius inventions that Tony Stark incorporated into his Iron Man suit was being able to fly. Look at him zooming in the sky along with the fighter jets, trying to reach his destination and stop his enemies from fulfilling their evil plans.

Once Iron Man reaches his destination, he stops mid-air and gets himself pumped to fight his enemies. You can see the sheer power of his suit with his fists clenched tight, about to smash his opponents into an inescapable defeat.

After sustaining a severe chest injury during a kidnapping in Afghanistan, Stark develops a suit of armor for himself to escape. Although the armor gets destroyed during his escape, it was the basic form of the Iron Man suit which he improved upon, adding features and functions once he was free and back into the world of Tony Stark.

One of his many weapons Iron Man incorporated into his suit of armor is the use of the gauntlets. He is able to fire rays by unfolding his hands as illustrated in this coloring page. The repulsor rays shoot out from the center of his palms, striking his enemies into submission.

Soaring at super speed, Iron Man has finally caught up with the rocket missiles launched by the enemy. He will be getting rid of these missiles and turning them away from innocent targets they were aimed for.

As mentioned earlier, Iron Man is able to fire weapons using his gauntlets. Here in this cool illustration showing him flying in the sky, you can see one of his gauntlets is opening up to the fire while the other hand is clenched in an iron fist.

The first live-action adaptation of Iron Man was directed by Jon Favreau, who also directed the 2010 sequel Iron Man 2. The first film went on to make about the US $585 million while the sequel earned around the US $623 million. Here is a cool illustration from one of the action sequences in the film.

It looks so cool being able to fly by putting on your suit of armor, doesn’t it? A genius that Tony Stark is, there is no limitation to his imagination and invention. Hearing about a possible problem arising somewhere, Iron Man has jumped into action and is flying his way to help out.

When Iron Man had to face the Hulk, he modified his armor with strong add-ons to enhance strength and durability in a fight against the Hulk. This modified armor came to be known as the Hulkbuster.

You can see that Iron Man is ready to fire the full strength of the repulsor rays from his gauntlets, taking his stance correctly with bended knees and stretched out arms.

Avengers: Infinity War, released in 2018, was the third movie in the Avengers franchise. It was the most successful film of the year and earned over $2 billion dollars, ranking fourth in the list of all-time highest grossing films.

Iron Man always updates and upgrades his suit, with the latest innovations and sometimes even on the circumstances and opponents he is facing. Seems like he has developed some cool additions and changes to his suit.

Another example of the changes he brings to his suit of armor is this fine illustration with minute detailing. This one seems to be battle ready and to strike out as many enemies as possible in a short span of time, resulting in major damage.

No matter where he is Iron Man has to be ready to take quick action and save himself and the innocent people around him. Doing just that with quick reflex action, Iron Man while flying in the air, takes fast aim to fire from his gauntlets.

Being one of the most popular superheroes, it comes as no surprise that Iron Man has a Lego avatar. Look at this Lego Iron Man bursting into the air to fly and fight.

The Iron Man suit of armor has been worn by other people as well, especially when he has been ill-disposed with an injury. His friend James Rhodes has put on the suit as well as his personal secretary and love interest Pepper Potts.

In the attack, prior to his abduction, shrapnel got stuck in Tony Stark’s chest near his heart. A fellow prisoner scientist Yinsen planted an electromagnet to keep the shrapnel away and together they created the arc reactor to power it and developed the first Iron Man suit.

When Russian physicist Ivan Vanko’s father was killed in an attack by someone wearing stolen Iron Man suit, he builds an armor with arc reactor powered electric whips to exact his revenge on Tony Stark. He was the main villain in Iron Man 2 with the aptly titled name Whiplash.

On that whipping note, we are here at the end of another thrilling collection of a superhero – Iron Man coloring images printable. If you can’t get enough of the superhero theme, you can check out other coloring page collections like the Avengers, Batman, and Spider-Man. In case you want to catch Iron Man on the big screen check out the recently released Avengers: Endgame, running successfully and breaking records worldwide. While you wait, you can enjoy filling in exciting colors in this collection of Iron Man colouring pages to print.