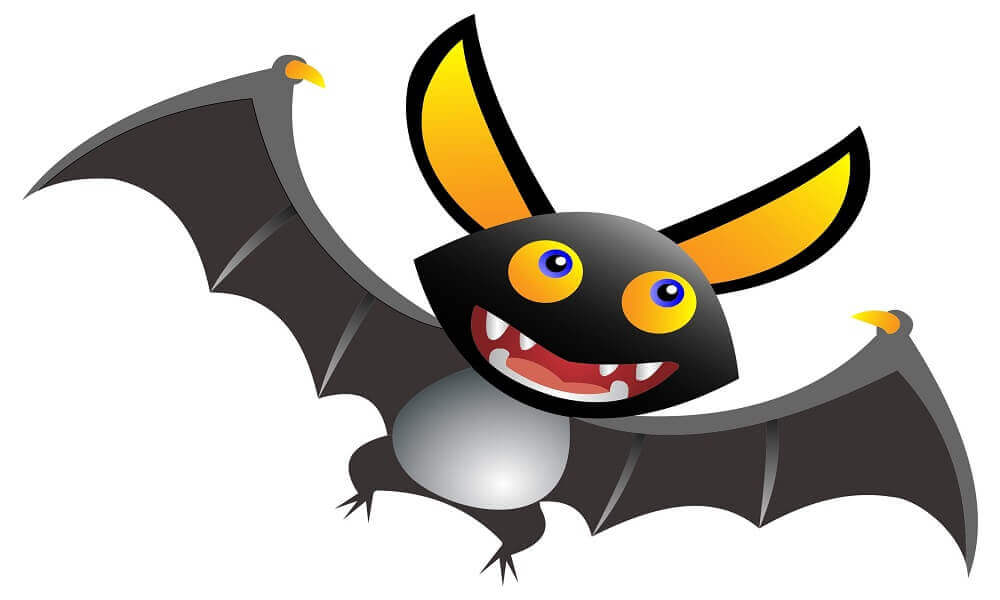 Hey pals! Hope you are doing great. Because in this article we are going to dive into the life of one of the smallest but no less dangerous a creature and to top it all, it can fly. We are talking about Bats! The only mammals capable of a non-stop flight, these creatures have over a thousand species. Remember the Dracula? He never came out in the sun. Well, bats are nocturnal creatures. They sleep literally hanging upside down from cave ceilings, or trees, or anywhere dark, damp, and moist. And they don’t have a short lifespan either! The average lifespan of this blood-sucking demon (although only three species are called ‘Vampire Species’) is forty years. That’s more than your dog! Have fun filling these free printable bat coloring pages. Oh, and keep plenty of black shades with you because you’ll definitely need them for these Halloween bat coloring sheets to print.

Back in the day, to call Batman to your rescue you used to flash a ‘Bat Symbol’ in the air. Well, looks like even he wants his initials now high in the sky. So narcissistic! Just kidding! Batman is one of the most selfless superheroes ever created. And he chose to be called Batman because he feared bats. He made his fear, his strength. Let’s color the yellow and the bat, pitch black to celebrate this hero.

Let’s get those shades right. Ghosts are white, and bats are black. Well, ghosts can be black too! Does that mean bats are ghosts? Ponder over this dilemma, while coloring them. And remember, keep the shades right!

Bats rarely drink blood, contrary to the stereotypes. In fact, many species are what we call, ‘Frugivores’, i.e., they love eating fruits. If not fruits, seeds, and pollen from flowers will serve their needs too. Did you hear about the spread of the Nipah virus in Kerala, India recently? That is happening because of these frugivores. Color them as you want.

Spread your arms in the air and say Hooray! For it is a new day today. Or in this case for the bat, it’s a new night. The twinkling stars in the dim light of the crescent moon, the perfect night to hunt for prey. Fun Fact: Pteropus bats or the ‘Frugivores’ are the largest in the world. Color that tree well, because it is a party night for that bat.

A group of bats is called a ‘Colony’ or a ‘Cloud’ of bats. A single colony may have bats anywhere between ten to a thousand. A cloud when it flies together can scare even the most strong-hearted of us, because thanks to movies, it always seems that they are coming for blood. Color these fifteen and make your own flock.

Looking for some warmth? Cuddle with a bat! Inside the caves, they wrap their wings around them for insulation. Also, a fun fact is they groom themselves like an obsessive teenager. They scratch and lick each other for hours to clean themselves. Color these hygiene freaks.

Look at the happy bat with hearts all over. Even his piercing teeth seem so cute in this. The bat has puppy eyes too. And it seems he would be a good partner to cuddle with. Let’s color this one with some bright colors instead of the standard black that we have been using so far.

Bats play a very important role in maintaining the ecological balance. Most bats are insectivores and they can eat up to one thousand and two hundred insects in an hour. So very often they consume their body weight in insects. This keeps the number of bugs in check. Color these population controllers.

That bat is going to crash into the other one, the one that is sleeping. Oh no, he won’t! That is because bats use echolocation to navigate in the dark (they don’t see very well at night). In echolocation, they simply send a high-frequency sound, inaudible to the human ear, and wait for it to bounce back and return to them. That’s how they know if something is blocking their way. Still, want them to crash? Well, you have the colors to crash them anyway.

Whenever you see a bat resting, it will be hanging upside down. It does so to protect itself from predators during sleep. If someone is on a bat hunt, the bat can immediately swoop down and just spread its wings to fly away, without having to spend energy overcoming gravity. Color these sneaky but cool creatures.

How did bats become associated with Halloween? One of the reasons could be Dracula, the vampire. But a bit more logical reason could be that the Celts celebrated their harvest season, which was during Halloween and they use to light Bonfires. Bonfires attracted insects and insects lead to bats. Let’s color these Halloween creatures.

Nothing like bats flying around putting their tongues into your favorite flowers. Bats love to drink nectar. And many like their nectar to be sweet. They are also great natural tools for the pollination of flowers. Try some nets if you want to protect your flowers. Till then join these bats in their feast by coloring them well.

Halloween is coming soon. Get ready to make some preparations. Carve those pumpkins, ready those costumes, and get the horror party going. But party decorations? What about those? Well, I can help you with the ceiling in the least. Hand the bats, upside down! Hundreds of them, some with open eyes, others with strong wings spanning feet. Color the celebration with some pomp.

Let us draw our own bat now. Trace those lines, connect those dote, beginning with number one and all the way up to the largest number on the grid. Tip: Give those wings some unusual designs. Paint the trace well and hang it on your wheel.

Not all bats are terrifying. Some can be cute too. Like this one, with the puppy eyes. Would you refuse him a hug? No! The baby bat is here to protect you at night from mosquitoes and spiders and whatever crawls up to you at night in your nightmares. He is your protector of dreams now. Color him like he is your best friend.

Bats can locate their food in pitch dark through echolocation. Alas! This time he found your candy, the one you were hiding from your big brother. But look at the bright side, you now have a friend for life. Color the bat licking your rainbow lollipop.

Bats love sucking on sweet nectar. Time for another fun fact: Ironically, an anticoagulant, found in a ‘Vampire Bat’s’ saliva can keep the blood flowing in humans. Scientists all over the world are trying to use the enzymes in its saliva to treat heart disease and stroke effects in humans. Color this ‘Vampire Bat’ well.

This bat is eleven years old now. It is time that he got his letter from Hogwarts School of Witchcraft and Wizardry. He is now waiting to be sorted into a house. What do you think it will be? Gryffindor, Slytherin, Hufflepuff, or Ravenclaw? This bat seems to be highly intelligent and therefore fitted to be in Hufflepuff. If you disagree, color him in the uniform of the house you want.

It is Halloween night. The evil spirits this year are intelligent and they have discovered how humans by playing dress-up have fooled them. To seek revenge, they have released their winged army of thirsty blood-sucking demons. Run! Run for your life! Mercy would not be given to anyone. Or save yourself by painting them well, because everyone loves a good portrait of themselves.

The dead have risen. Not dead humans though. It is the bats! The dead bats that died because you made them an endangered species. To top it all off, even Batman is supporting them. There is no one to save you now. That grave has your name written all over it. Color this image like it is your last picture for the day.

Why should big brothers and sisters have all the fun? Boo! We have something for you too! Color these easy to paint bats, print the sheets, and scare your friends away with a boo!

There are some bats that feed on frogs. But not all frogs are edible! A variety of frog species are poisonous as well. So how do the bats tell the difference between what to eat and what not to eat? By listening! Bats can tell if it is safe to eat the frog by listening to the male frog’s call. Color these interesting night hunters.

Bats make a high-pitched sound (above sixteen thousand hertz), and therefore, these sounds cannot be received or processed by the human ear. However, you can hear a distinct ‘Eeeeek’ sound around or near a cloud of bats or when the mother bat is communicating with its pup. Color these secret communicators.

October 31st is just around the corner. Don’t you want to impress your friends with some Halloween Magic? Create these lip-smacking bat design cupcakes as a treat that also makes up for the trick. Don’t worry the bats won’t complain either, because they love sweet things. Color the cupcake and start searching for some delicious recipes.

The wings of a bat are not just for flying. The wings are made of finger bones which are encompassed by a skinny layer. Wings being the maximum portion of the surface area, they help it regulate its body temperatures, the pressure of the blood, maintain the required water balance as well as regulate gas exchange. Color the mighty wings.

This species found in the south of the United States is now threatening to extinction. This is mainly due to the destruction of their natural habitat due to cave disturbances and human interference. It feeds mainly on moths and has a sizeable wingspan of around twelve to thirteen inches. Color this distinctive creature before it vanishes off the face of the earth.

Now that you have understood the basic anatomy of the bat, it is time to delve a bit deeper. This is an image of two bats in further detail, as you can see the muscles and the body fur distinctions. Google some images about whether or not do these parts have any specific color and paint them accordingly.

Careful! There is a bat gone rogue in your area. He has evolved to big sharp nails and sharper teeth as well. Biting humans is now becoming a sport for him. He is coming for you now because he can sense your iron and vitamin-rich blood. But he hates the yellow color. So, change into something yellow, save yourself, and color him black. 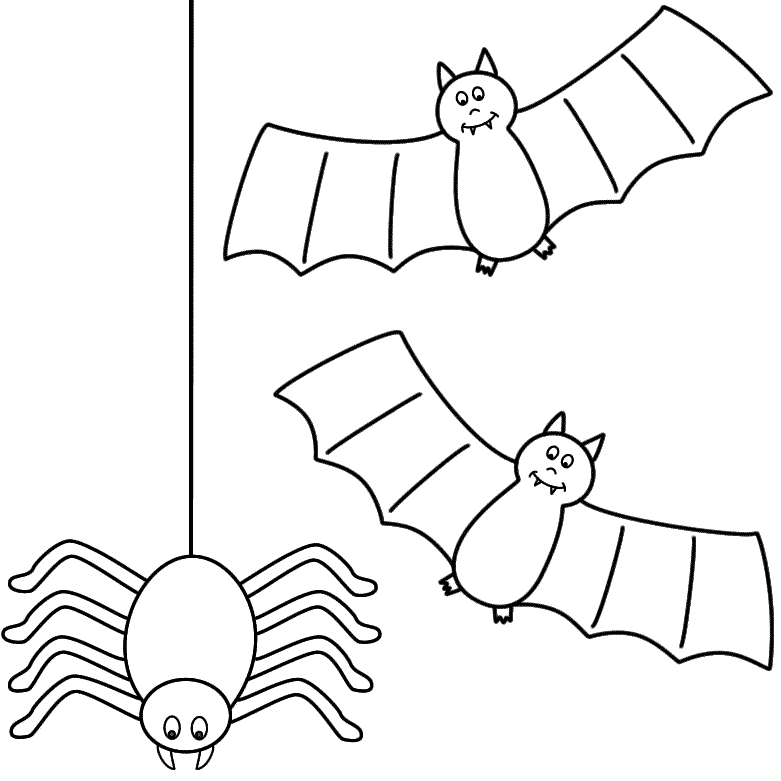 It is the spiders’ last day on earth for two bats are coming for it from behind. Is there any chance the spider can survive? There is some hope indeed. What if both the bats fly in exactly at the same moment? Instead of getting to the spider, they will hit each other in the face and crash. Let us save the spider today. Pick your colors.

The Vampire is out tonight. He wanted to feel the fresh air against his cheeks because it’s been a millennium since he left his coffin. And he has chosen the perfect disguise. Become a bat! But he should lose the shoes, they might give him away. Paint those shoes well.

Bats live in every place on this earth except Antarctica. But due to reckless human behavior, encroachment, and destruction of natural habitat their population is becoming increasingly scarce. They play a vital role in maintaining a balance within the ecological chain. Let us save them.